At least 15 people have died in the Democratic Republic of Congo after a volcano erupted with little warning over the weekend.

One photo from the Associated Press shows lava from Mount Nyiragongo covering the town of Buena, north of Goma, Congo.

Lava Mount Nyiragongo sent thousands of people fleeing on Saturday and Sunday, the UN’s children’s agency told the AP. Hundreds of homes have been destroyed in the eruption.

While at least 15 people are confirmed dead, local officials told AP that it’s too soon to know the total death toll.

Mount Nyiragongo last erupted in 2002, in an incident that killed 250 people and left 120,000 homeless, Reuters reported. 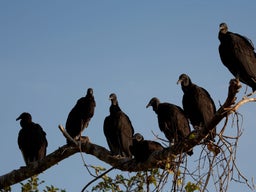 Buzzards that vomit when threatened and leave piles of acidic dropping...

The founder of DeFi network avalanche says success for crypto will...

A Dollar General store was robbed 4 times in 3 months,...

We visited the community living in the shadow of an Amazon...