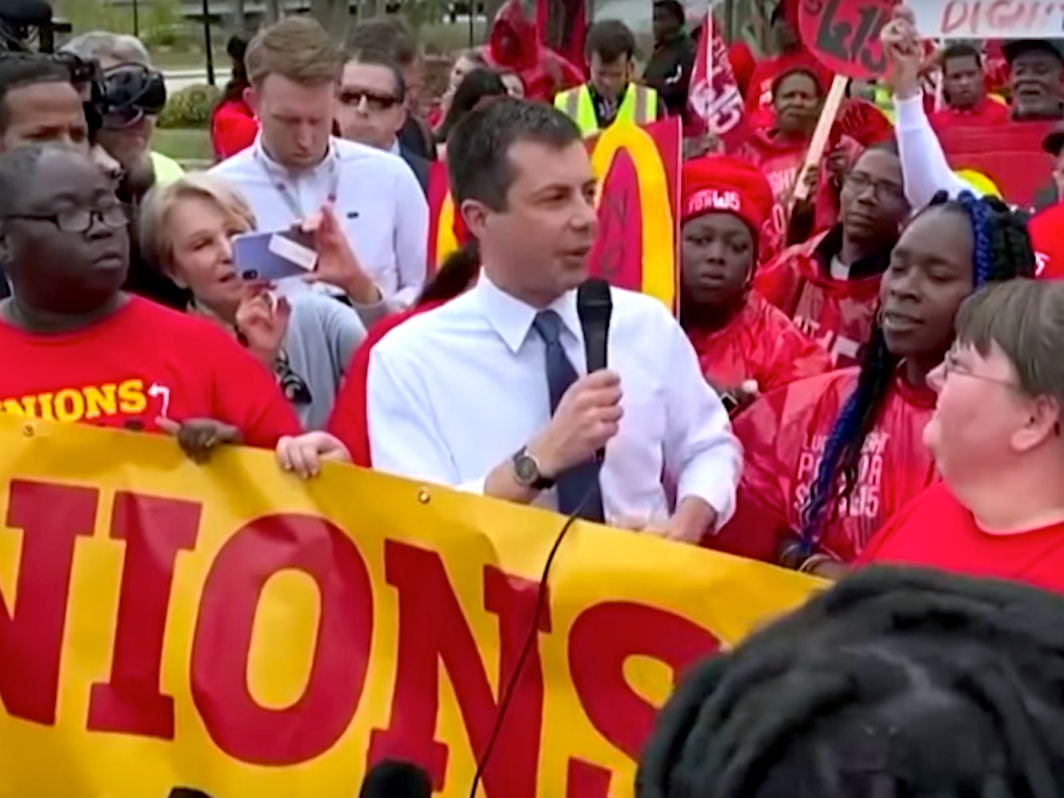 Democratic presidential candidate Pete Buttigieg garnered both cheers and boos at a Fight for $US15 march in Charleston, South Carolina on Monday.

McDonald’s workers and activists demonstrating for a $US15 minimum wage and the unionization of fast food employees embraced the South Bend, Indiana mayor, according to footage captured by Time. But activists from Black Youth Project 100, an African American youth social justice organisation, heckled Buttigieg over his political record.

In the video, Buttigieg initially appeared behind the Fight for $US15 banner, flanked by marchers wearing the movement’s red shirts. Activists from the Poor People’s Campaign were also present at the event.

“Everyone here supports you and we support $US15 and a union for all fast-food workers,” Buttigieg said. “You deserve $US15. You deserve a union. And we stand with you.”

“I’m barely making 40 hours a week at $US7.25. That’s nothing. How am I supposed to live like that?” McDonald’s employee Taiwanna Milligan said in a Fight for $US15 statement. “Even if it means us getting arrested, I’m going to do what I have to do to get our voices heard.”

“Together with our independent franchisees, we pride ourselves on building workplaces that support crewmembers and their ambitions,” a McDonald’s spokesperson told Business Insider in a statement. “The average starting wage at corporate-owned restaurants is more than $US10 per hour and exceeds the federal minimum wage; McDonald’s does not lobby against or participate in any activities opposing raising the minimum wage and believes elected leaders have a responsibility to set, debate and change mandated minimum wages.”

“I was inspired when we marched together over the summer, and I’ll tell you why I was inspired,” he said. “Because you didn’t talk about what you wanted for you. You talked about wanting to provide for your child and that is why everyone here supports you and we support $US15 and unions for all fast food workers.”

The Fight for $US15 marchers began chanting – repeating the slogan “we work, we sweat, put $US15 on our check” – as activists from BYP100 began to hurl barbs. One accused Buttigieg of being “a flip-flopper,” while another said he was “co-opting the movement.” The opposing group of protestors also began to chant, countering with: “Pete can’t be our President, where was $US15 in South Bend?”

The minimum wage in Indiana is $US7.25. In March 2019, the South Bend Tribune called for $US12 minimum wage. Columbia, South Carolina newspaper The State reported that Buttigieg successfully raised the minimum wage for South Bend city employees to $US10.10 an hour in 2016, but ran into a roadblock with Indiana state law that “prevented local municipalities from instituting a higher mandated minimum wage for all businesses.”

“We want to know how you’re going to change structural barriers that prevent working folks that are risking their jobs today from getting a livable wage,” BYP100 activist Jamecia Ray told Time.

Buttigieg was the only 2020 presidential candidate to appear at Monday’s march, but representatives of rival campaigns were also present. US Representative Ayanna Pressley, the co-chair of Senator Elizabeth’s campaign, also attended. And actor Susan Sarandon, a surrogate for Senator Bernie Sanders, also met with workers before the march.

Watch the full video from Time: