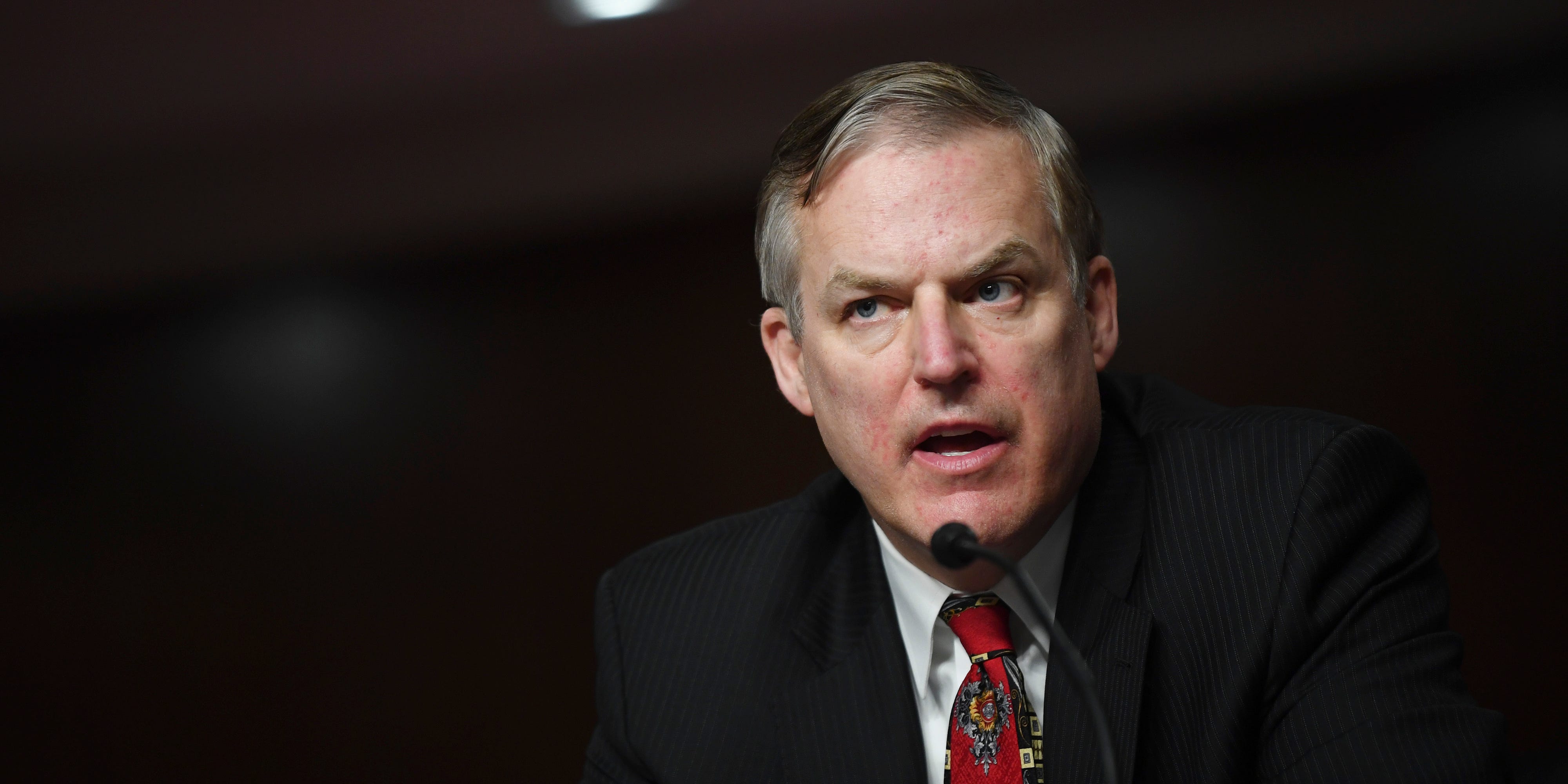 Kevin Dietsch/Pool via APJames H. Anderson testifies on his nomination to be a Deputy Under Secretary of Defence for Policy during a Senate Armed Services Committee nominations hearing on Capitol Hill in Washington, Thursday, May 7, 2020

Acting Under Secretary of Defence for Policy James Anderson resigned after a series of clashes with the White House, specifically the personnel office over its attempts to install controversial individuals into positions of power at the Pentagon, Politico reported, citing current and former defence officials.

A defence official confirmed to Insider that Anderson resigned but did not provide further details on his resignation.

“It has been honour to serve our great nation both in and out of uniform,” the former Marine Corps intelligence officer wrote in his resignation letter, which did not clarify his reason for resigning. The letter concludes with the line: “Now, as ever, our long-term success depends on adhering to the U.S. Constitution all public servants swear to support and defend.”

Anderson, who was confirmed as the deputy under secretary of defence for policy this past summer, has been serving as the acting under secretary of defence for policy following the forced resignation of John Rood earlier this year. His duties as deputy are currently being performed by Anthony Tata, one of a handful of controversial officials the White House has attempted to install in top Pentagon posts.

Rood, who previously served as the Pentagon’s top policy official, was asked to resign in February, reportedly because Trump lost confidence in his ability to execute his agenda. There were also questions of loyalty, as Rood undercut the administration’s excuse for withholding aid to Ukraine, the focus of congressional impeachment hearings.


Read more:
The senior Pentagon policy official who certified security aid to Ukraine has been asked to resign

In his role as acting under secretary of defence for policy, Anderson reportedly challenged White House efforts to bring Frank Wuco and Rich Higgins into the Department of Defence as deputy overseeing special operations and chief of staff to Tata respectively.

Wuco is a former talk radio host and birtherism proponent, Higgins is a conspiracy theorist who was fired from the National Security Council, and Tata previously called former President Barack Obama a “terrorist leader” on Twitter, Politico reported.

Tata, a retired Army general who became a Fox News commentator and Trump supporter, was nominated as the under secretary of defence for policy earlier this year, but the Senate decided to cancel his confirmation hearing after his offensive tweets surfaced.

Sidestepping the Senate, the White House moved Tata into a role in the Pentagon where he could fulfil Anderson’s duties as deputy under secretary of defence for policy.

With Anderson’s resignation Tuesday, the door has potentially been opened for Tata â€” who has since deleted and said he regretted his previous tweets â€” to move into the top Pentagon policy position.

Anderson’s departure could also be the start of an exodus following the firing of Secretary of Defence Mark Esper Monday, defence officials told Politico.

Trump announced on Twitter Monday that he had “terminated” Esper, though he did not give a reason why. Esper’s firing was sudden but not unexpected, as the the secretary and the president had split on issues such as deploying US troops to American cities to quell unrest and support for the Confederacy.

Esper has been replaced by National Counterterrorism Centre Director Christopher Miller, who will oversee the Department of Defence in an acting capacity.