A Trump-appointed judge eviscerated the president's biggest election lawsuit in Pennsylvania, saying the campaign's 'claims have no merit' 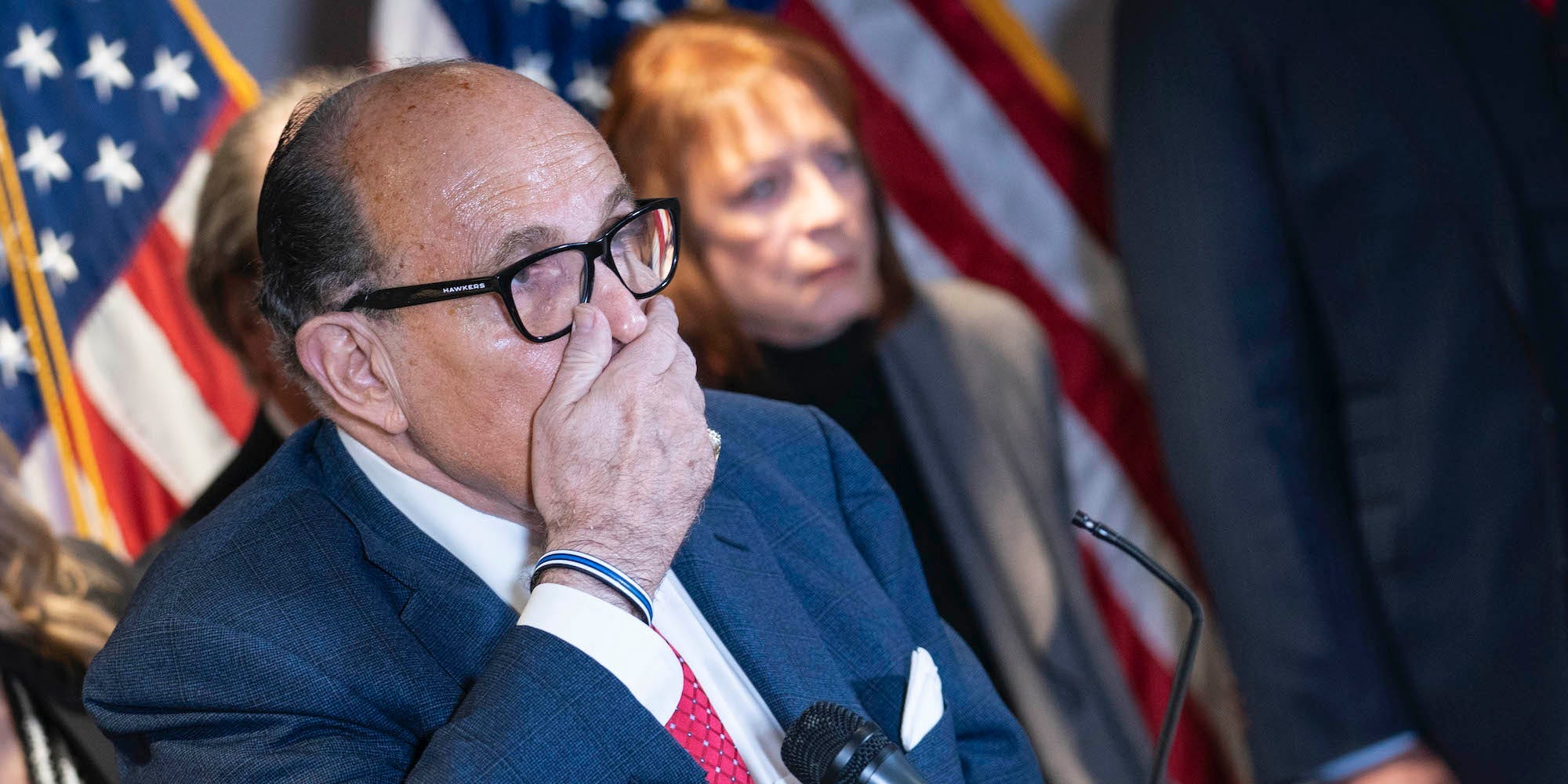 Sarah Silbiger for The Washington Post via Getty ImagesRudy Giuliani, a lawyer for President Donald Trump, at a news conference on November 19.

A Pennsylvania appeals court on Friday decisively rejected the Trump campaign’s request to block a lower court’s ruling that dismissed the campaign’s effort to stop the state from certifying its election results.

In a 3-0 decision, the panel upheld the lower court’s ruling, dealing another blow to the Trump campaign’s faltering attempts to overturn the results of the 2020 election, which President-elect Joe Biden won this month.

Notably, the judge who wrote the appeals court’s decision, Stephanos Bibas, was appointed by President Donald Trump. The other two judges are also conservative; both were appointed to the court by President George W. Bush.

“Charges of unfairness are serious. But calling an election unfair does not make it so,” Bibas wrote. “Charges require specific allegations and then proof. We have neither here.”

He added that “the Campaign’s claims have no merit.”

The Trump campaign’s Pennsylvania lawsuit is its biggest legal challenge related to the 2020 election. In the case, the campaign sued seven Democratic counties over vague allegations of voter fraud and asked that a judge block the state from certifying its results for Biden.

However, the two instances in the case that Trump’s legal team singled out as evidence of voter fraud did not take place in any of the counties it sued. They occurred in Fayette and Luzerne counties, both of which overwhelmingly voted for Trump.

Arguing before a Pennsylvania district court, Rudy Giuliani, Trump’s lead defence lawyer, made unspecified and baseless claims about “widespread nationwide voter fraud” that were not supported by the campaign’s lawsuit. As a result, US District Judge Matthew Brann dismissed the lawsuit, saying it was an effort to disenfranchise 7 million voters.

The campaign appealed Brann’s decision to the 3rd Circuit Court of Appeals, which on Friday tore apart the president’s legal team’s arguments.

Bibas singled out Giuliani, writing that while the former New York mayor has claimed that there was widespread voter fraud, the campaign’s lawsuit did not make that allegation.

“To start, note what it does not allege: fraud,” Bibas wrote. “Indeed, in oral argument before the District Court, Campaign lawyer Rudolph Giuliani conceded that the Campaign ‘doesn’t plead fraud’ … He reiterated: ‘If we had alleged fraud, yes, but this is not a fraud case.'”

The judge also reaffirmed the district court’s decision to reject the campaign’s request to amend its lawsuit for a third time after the first and second iterations had “fatal” flaws.

Most of the claims in the second version of the complaint “boil down to issues of state law,” Bibas wrote. But he said that “Pennsylvania law is willing to overlook many technical defects.”

“It favours counting votes as long as there is no fraud,” he wrote. “Indeed, the Campaign has already litigated and lost many of these issues in state courts.

“The Campaign tries to repackage these state-law claims as unconstitutional discrimination,” he added. “Yet its allegations are vague and conclusory.”

Bibas pointed out that the Trump campaign “never alleges that anyone treated” it or Trump votes “worse than it treated the Biden campaign or Biden votes.”

Moreover, he wrote, the amended complaint “also says nothing about curing technical state-law errors in ballots.”

“Each of these defects is fatal, and the proposed Second Amended Complaint does not fix them,” he said. “So the District Court properly denied leave to amend again.”

Bibas alluded to the fact that the number of ballots the campaign “specifically challenges” â€” a couple hundred â€” would not significantly affect Biden’s margin of victory in Pennsylvania of over 81,000 votes. And he echoed Brann’s ruling, writing that “tossing out millions of mail-in ballots would be drastic and unprecedented, disenfranchising a huge swath of the electorate and upsetting all down-ballot races too.”

Giuliani and Jenna Ellis, another lawyer on Trump’s legal team, said in a statement that “the activist judicial machinery in Pennsylvania” was trying to “cover up the allegations of massive fraud.”

“We are very thankful to have had the opportunity to present proof and the facts to the PA state legislature,” Giuliani and Ellis said. “On to SCOTUS!” they added, referring to the US Supreme Court.

.@RudyGiuliani and me on Third Circuit’s opinion:

The activist judicial machinery in Pennsylvania continues to cover up the allegations of massive fraud.

We are very thankful to have had the opportunity to present proof and the facts to the PA state legislature.