The penguins who were let loose in a Chicago aquarium met Beluga whales, and it's hard to tell who was more starstruck 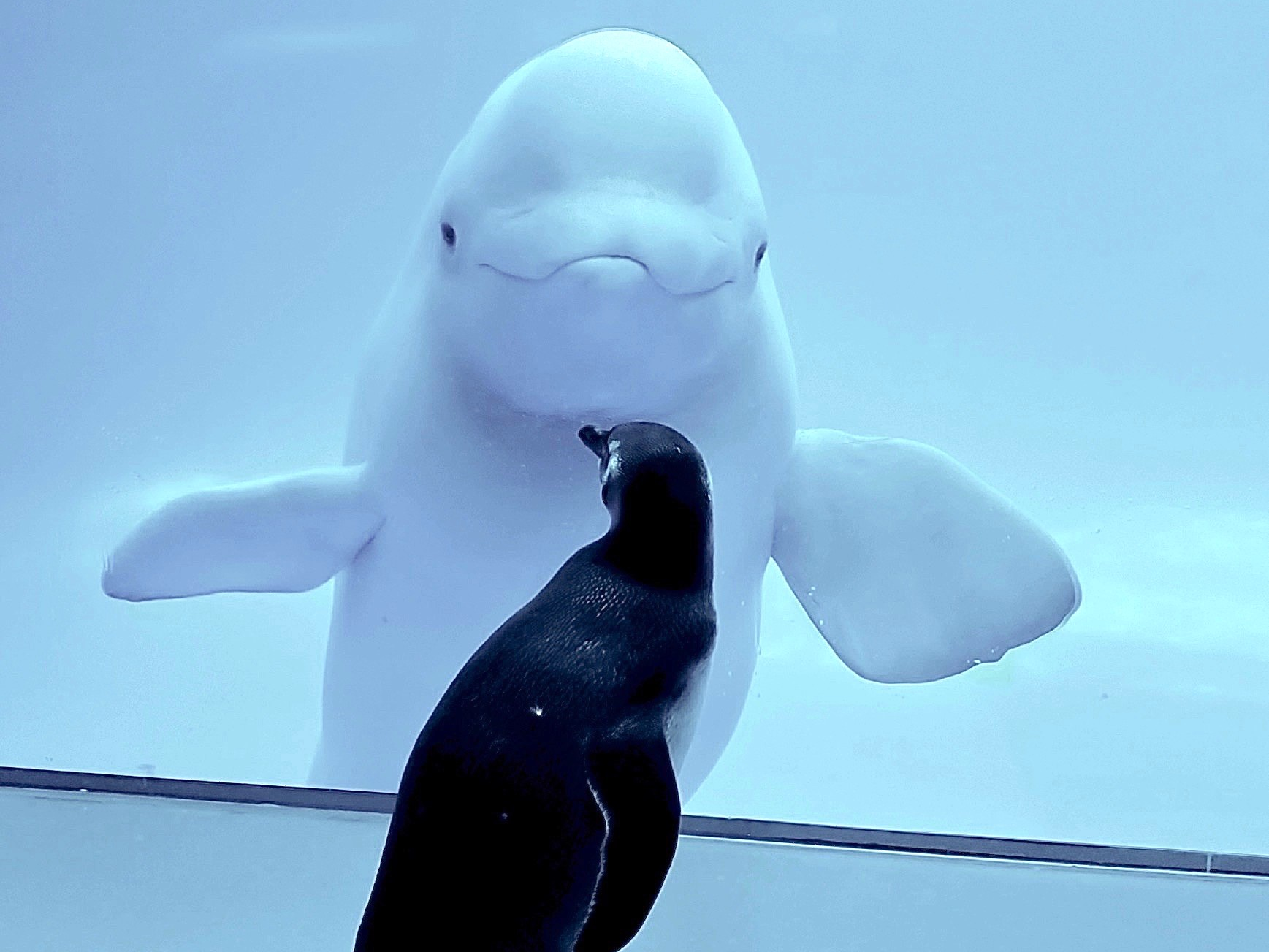 Shedd AquariumPenguins at Shedd Aquarium in Chicago got to go on a field trip to meet the Beluga whales after it closed due to the coronavirus pandemic.

In the midst of a news cycle filled with few uplifting stories, hearts across America were instantly warmed by the sight of adorable penguins exploring an empty aquarium.

And thankfully for all of us, the penguins at Shedd Aquarium in Chicago, Illinois, have continued their field trips as the space remains closed. 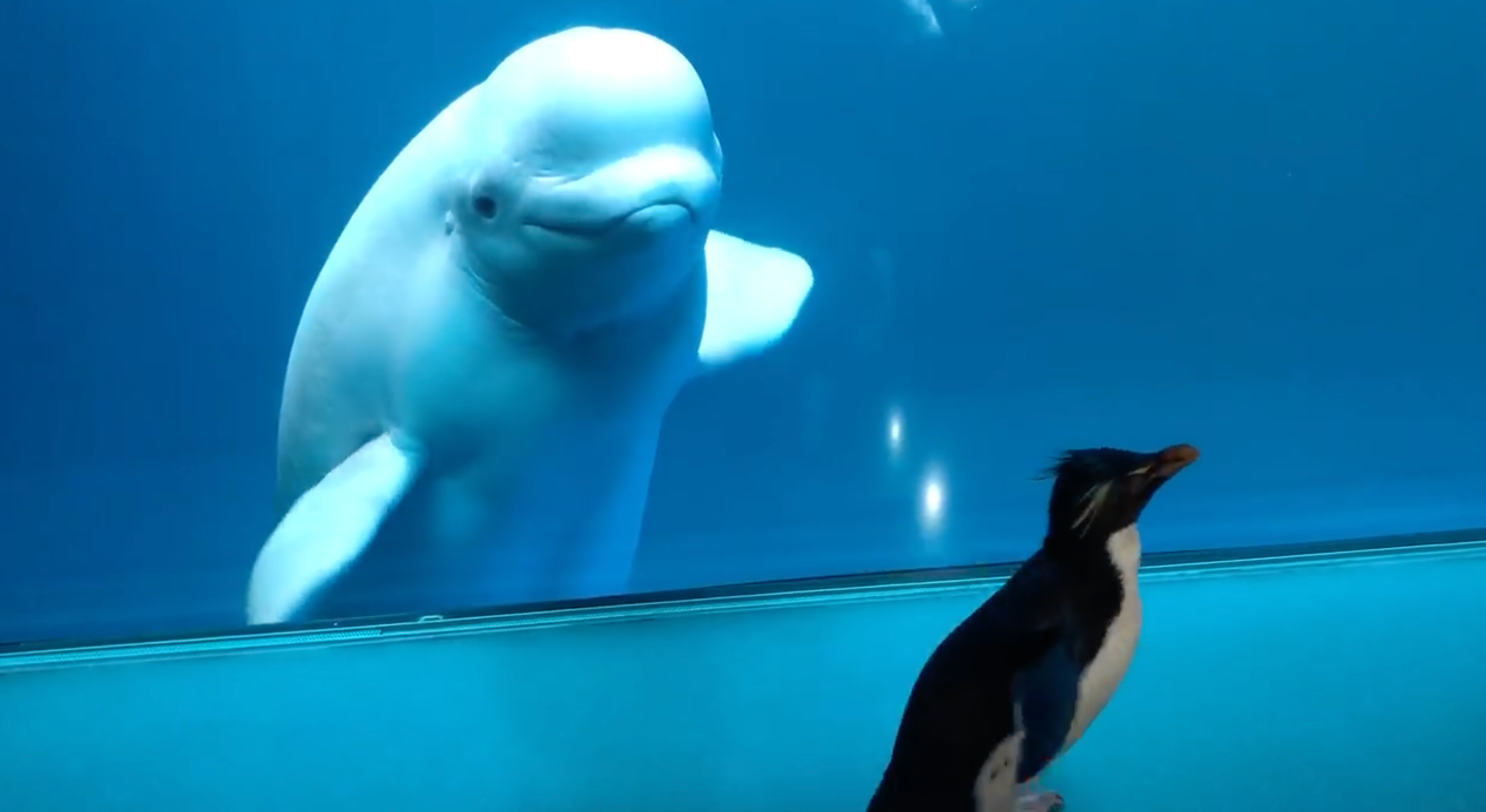 Shedd AquariumOne of the Beluga whales checks out Wellington during his field trip.

The Belugas were especially fascinated by Wellington, a rockhopper penguin. Shedd AquariumThe Belugas came right up to the glass to get a closer look at Wellington. 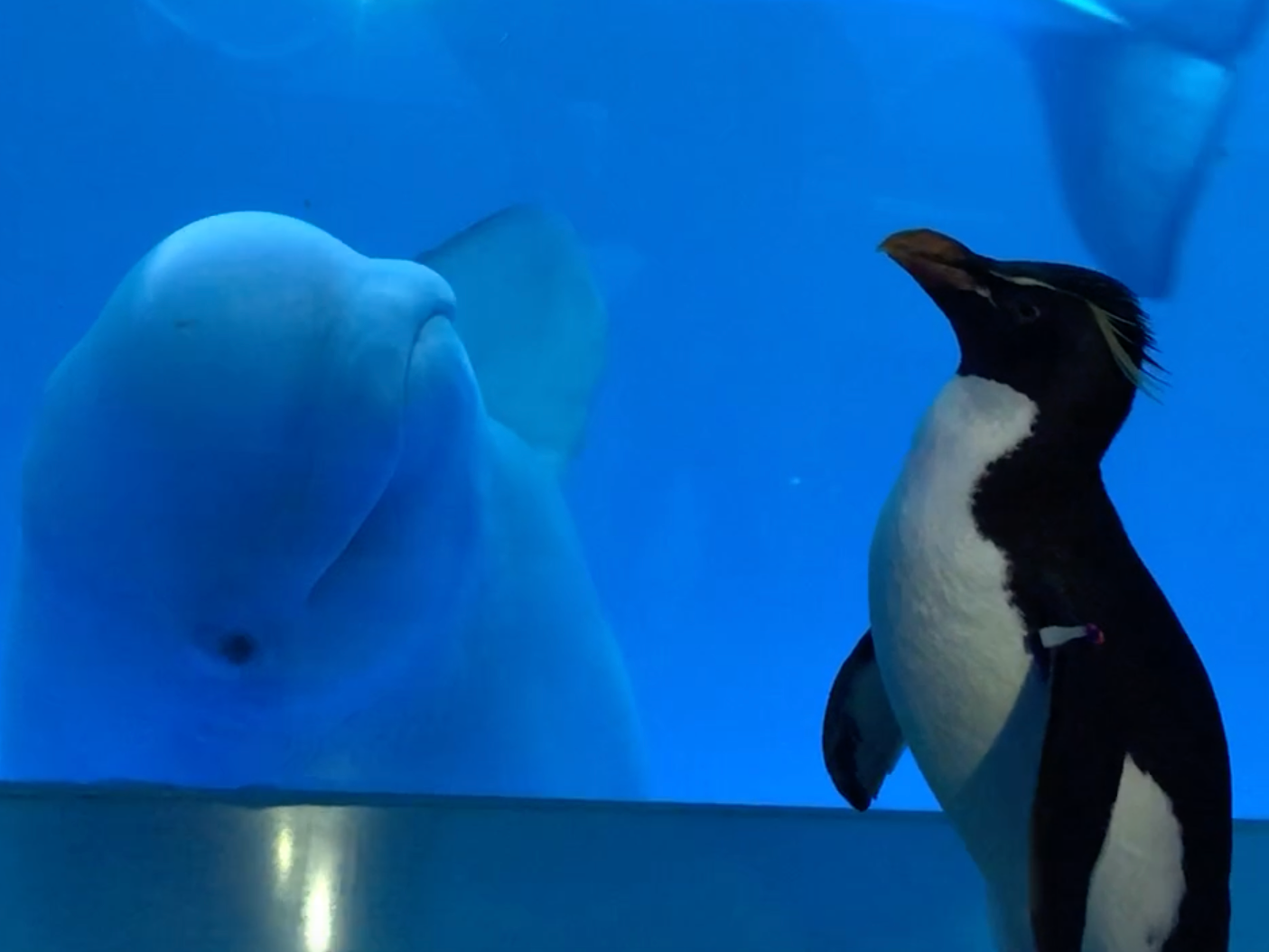 Shedd AquariumOne of the Belugas couldn’t take their eyes off of Wellington.

This was likely the first time the whales had ever seen a penguin. While Beluga whales live in the Arctic Ocean in the Northern Hemisphere, penguins are native to the Southern Hemisphere.

The whales couldn’t take their eyes off of Wellington during the visit, swimming right up to the glass to get a closer look at him.

Wellington, meet the belugas! ???? ???? This weekend, Wellington visited Kayavak, Mauyak and baby Annik, who were very curious about this little rockhopper. Belugas are northern hemisphere animals, so they would likely never see a penguin! pic.twitter.com/XrpF3BlKnu

Magellanic penguins Tilly and Carmen also got to roam around the empty aquarium, meeting Kayavak for the first time on their “polar field trip.”

Staff have been using the empty aquarium as a chance to enrich their animals in new and exciting ways. 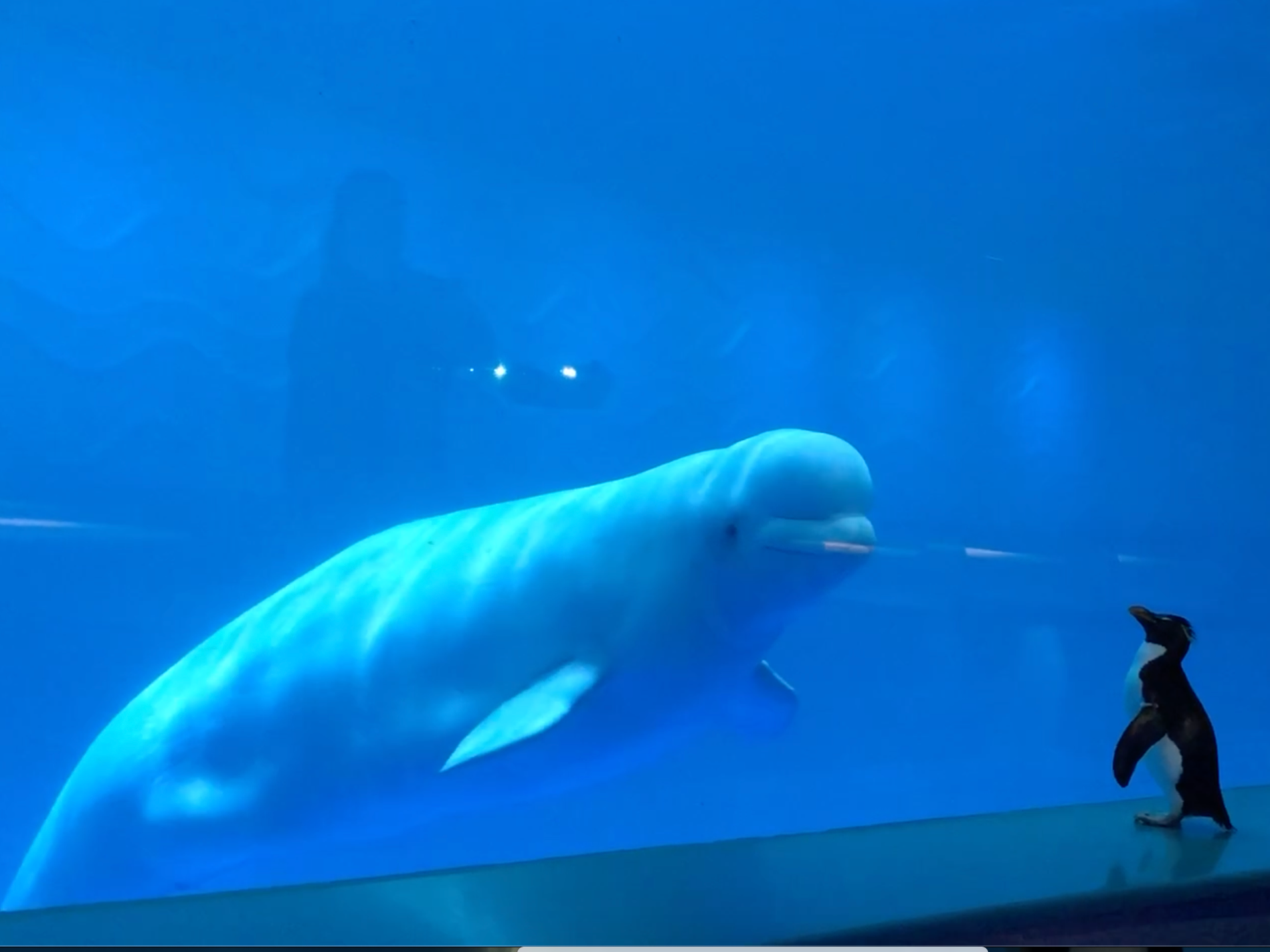 “While Chicago’s Shedd Aquarium may be closed to the public, animal care staff and veterinarians are onsite 24/7,” a spokesperson told Insider.

“Without guests in the building, caretakers are getting creative in how they provide enrichment to animals – introducing new experiences, activities, foods, and more to keep them active, encourage them to explore, problem-solve, and express natural behaviours.”

When the penguin field trips first began, Wellington got to check out the dolphins and “Amazon Rising” section and was clearly fascinated. 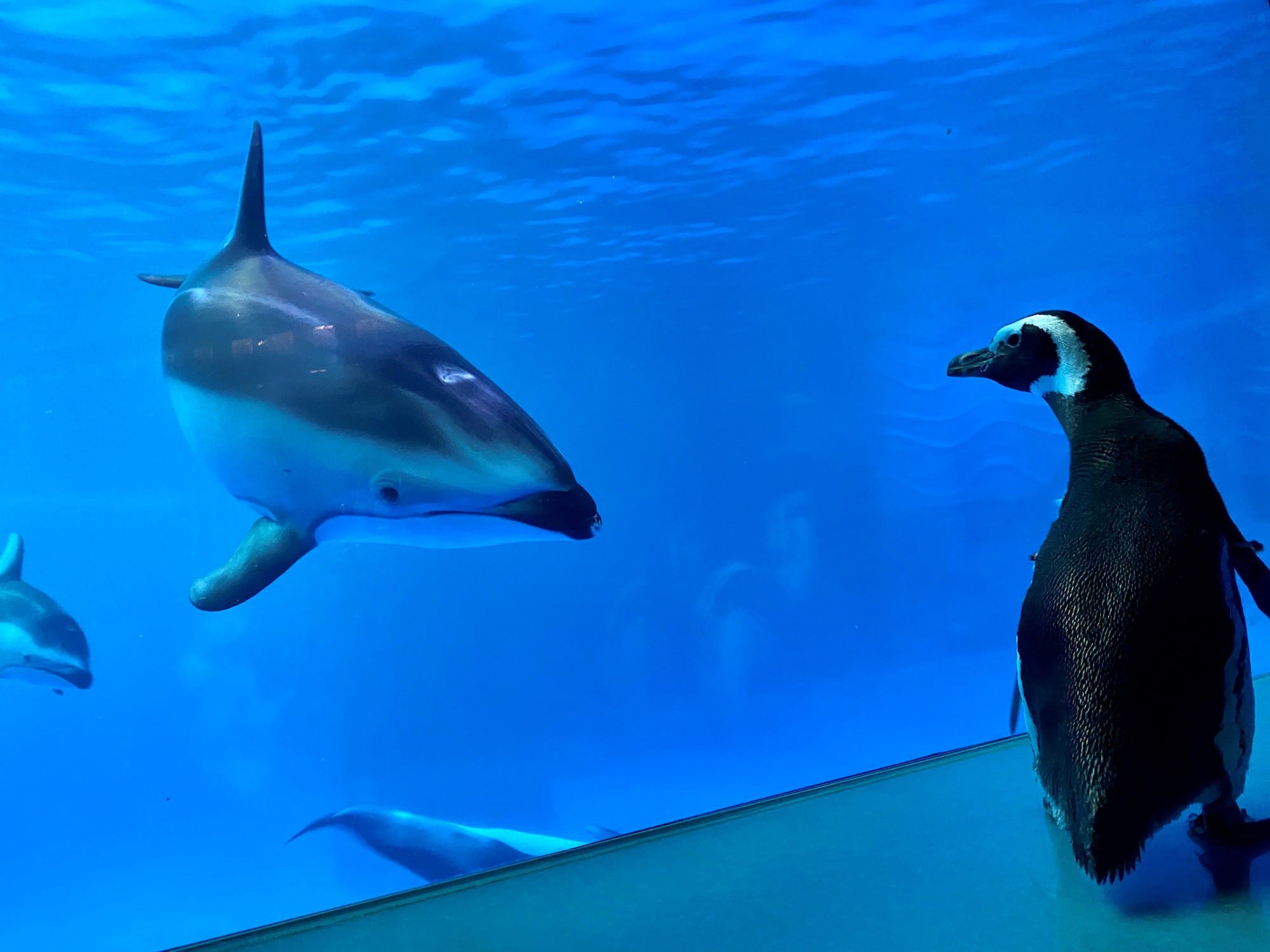 Shedd AquariumWellington was fascinated by the dolphins at Shedd.

“He seemed most interested by several of the freshwater fish species, including the red-bellied piranhas and the black-barred silver dollars,” the spokesperson said. “Those same fish seemed equally interested in Wellington, meaning the penguins aren’t the only animals receiving enrichment from these pop-up field trips.” The aquarium later revealed on social media that Wellington now has a “favourite fish” that he found during that particular field trip.

Where's Wellington?? ???? Fun fact: Wellington had a "favorite fish" on his field trip through Amazon Rising! He seemed extra interested in the neon-colored cardinal tetras. pic.twitter.com/Jv4zCCPYzj

Edward and Annie, a bonded pair of rockhopper penguins who are together for the nesting season, got to tour the aquarium’s rotunda. 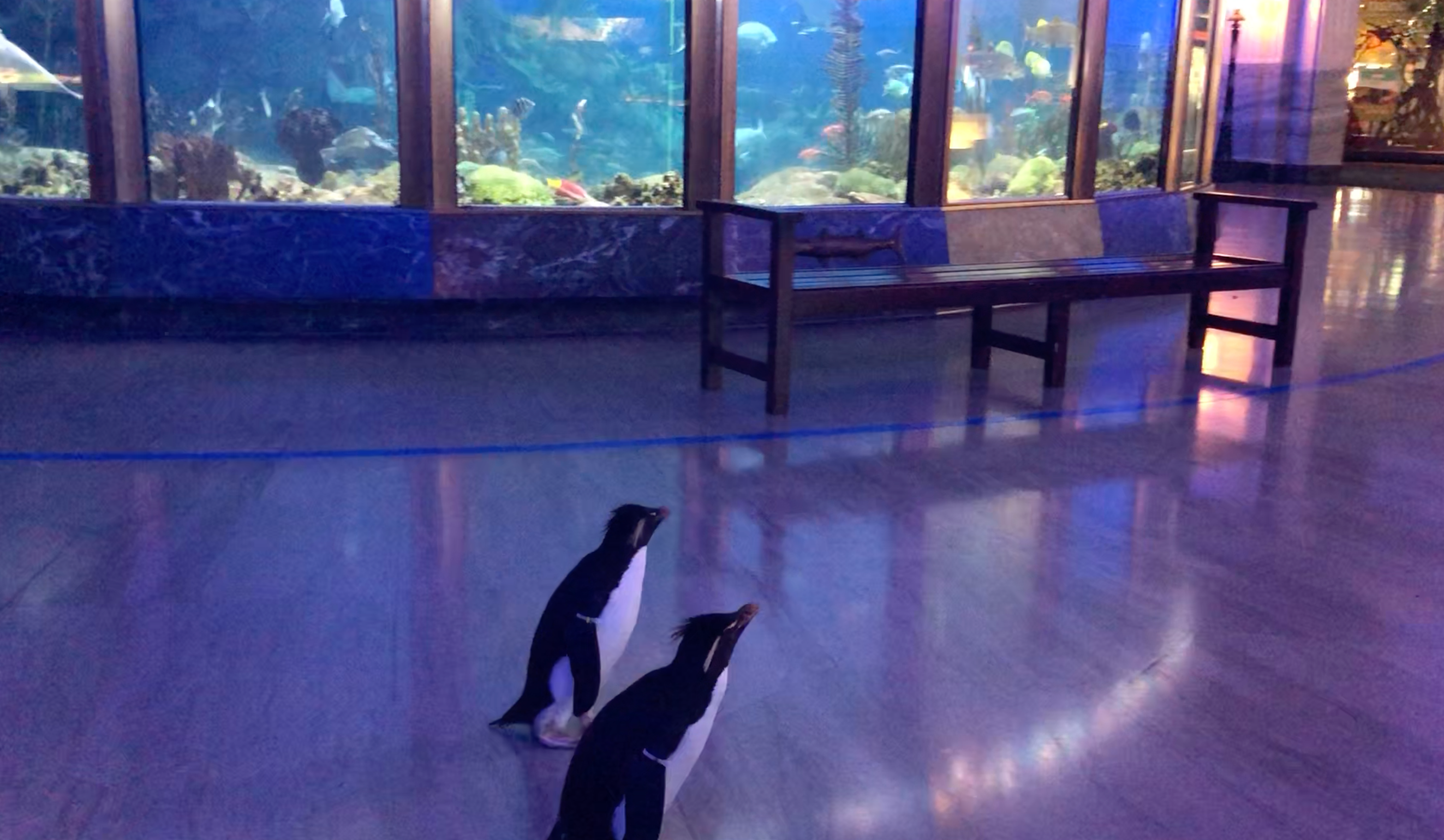 They even checked out the information desk. Shedd AquariumEdward and Annie check out the information desk.

Shedd Aquarium has continued to keep fans up to date on its penguins and their many adventures, which have included a trip to see the sea otters.

Wellington meets the sea otters! ???????? Wellington the rockhopper continued his field trip around the aquarium by visiting the Shedd otter habitat. #WheresWellingtonWednesday (1/2) pic.twitter.com/VlEeDzSoIV

Where's Wellington now? ???? This little rockhopper took a tour of Shedd's Wild Reef…and he's not alone! A few of the Magellanic penguins that call Shedd home joined this penguin party, checking out this massive habitat. pic.twitter.com/NcKkOtGdPw

Shedd has also been using the posts to educate fans about its penguins, revealing that fan-favourite Wellington is actually 32 years old – double the life expectancy of a rockhopper.

At 32 years old, Wellington is no spring chicken (and not just because he’s a penguin!) He is more than double the life expectancy of a rockhopper. Thanks to laser therapy and cataract surgeries, he’s “still got it” and can enjoy going on enriching adventures. (2/2) pic.twitter.com/nWY9MlR0lR

There's so much for Bosco to see on his adventure in Underwater Beauty! ????
Penguins like Bosco the rockhopper stand out with those bright yellow "eyebrow" crest feathers. During mating displays, rockhoppers shake their heads to make those long yellow plumes whirl. pic.twitter.com/ubiu5Z1R32

Magellanic penguins are excellent long-distance swimmers. With their powerful wings, they can hit speeds of 15 mph. Monte explored the Polar Play Zone and stopped to watch Dolores and Mercedes swim. pic.twitter.com/dYiDhdGhNM

And penguins aren’t the only animals who have been allowed to explore the empty aquarium. Tyson the porcupine got to meet the penguins as well.

The penguins aren’t the only animals taking field trips around the aquarium! Tyson the prehensile-tailed porcupine visited the penguin habitat while munching on a hard biscuit, which helps file down his constantly-growing teeth. pic.twitter.com/X2PpEHt1L3

Shedd’s zookeepers told Insider that, even during this time of uncertainty, it is important to keep things as normal as possible for their animals.

“Enrichment is a regular part of the animals’ day, so we are keeping the day for the animals the same,” they said. “A field trip in the aquarium is just enrichment we don’t do as frequently.”

“Being closed doesn’t affect the animals, they still get to see the animal care staff they would normally see on a daily basis.”

For those who want to help the aquarium during these difficult times, there is even the option to symbolically adopt an animal at Shedd – including penguins. 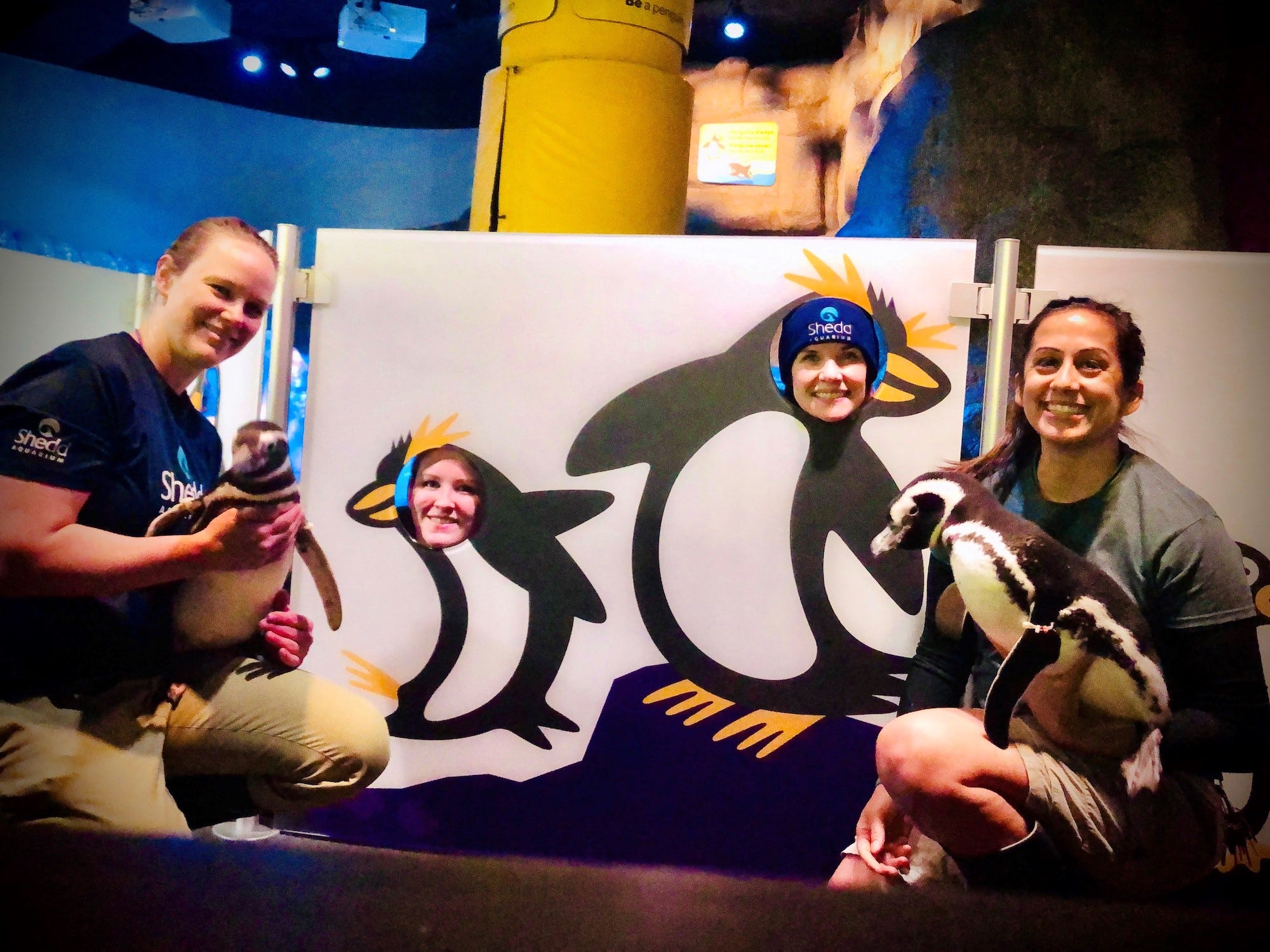 Shedd AquariumShedd’s zookeepers are still on hand to take care of the animals, and are making sure they get plenty of enrichment.

Shedd officially shut its doors on March 13 in “the best interest of overall wellness for our community and for each other.”

“While we are disappointed that we won’t be able to welcome you to the aquarium during this time, we are closing out of an abundance of caution and to do our part in the social distancing efforts to help stop the further spread of novel coronavirus,”the statement read.

“Our dedicated caretakers and veterinarians will continue to provide the highest standards of professional care and welfare for our animals on site.”

The aquarium is scheduled to remain closed through April 20.