Terrified Pelosi staffers barricaded themselves in a conference room and huddled under a table as pro-Trump rioters ransacked the speaker's office: Report 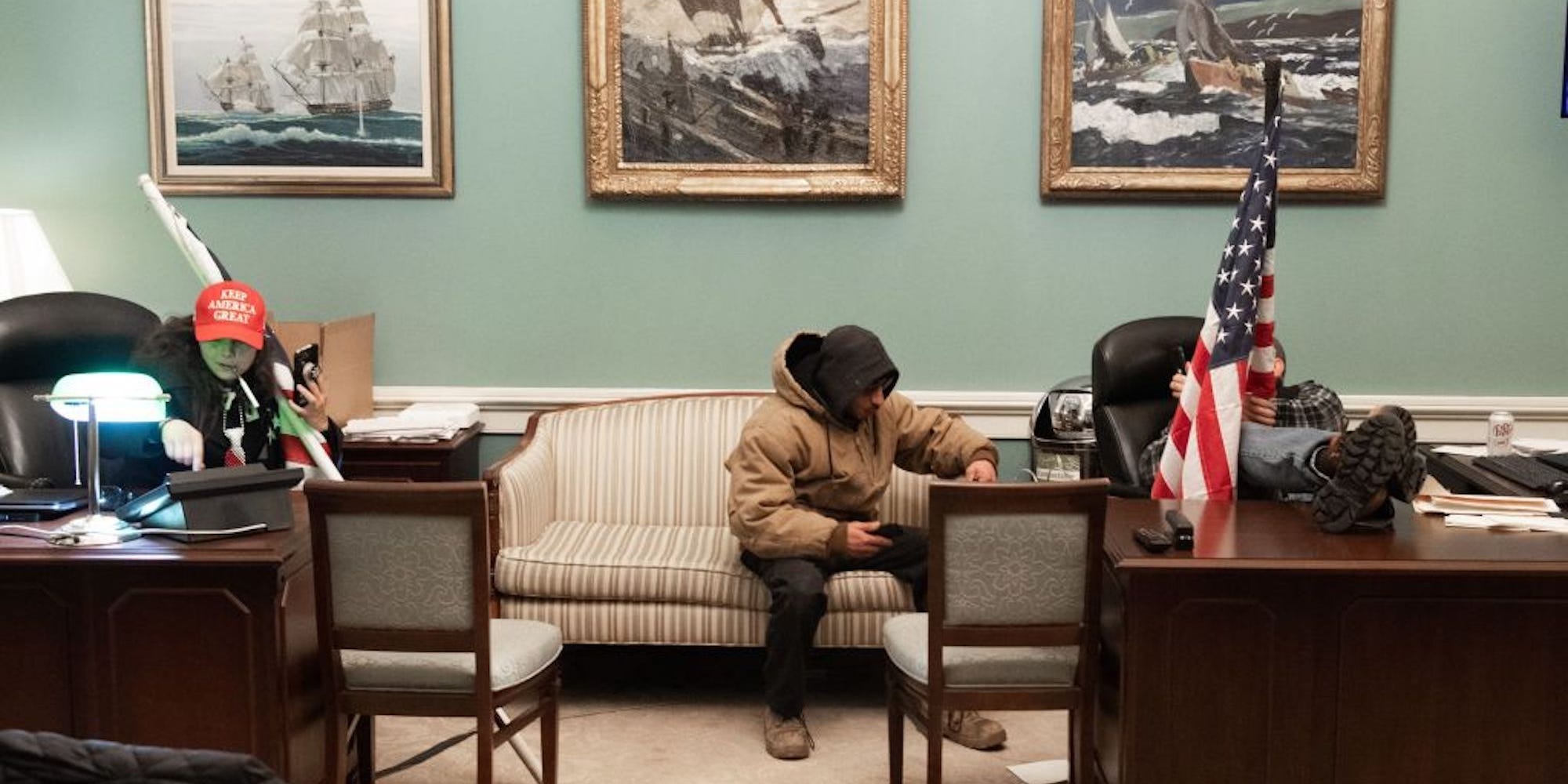 SAUL LOEB/AFP via Getty ImagesSupporters of US President Donald Trump sit inside the office of US Speaker of the House Nancy Pelosi as he protest inside the US Capitol in Washington, DC, January 6, 2021.

Staffers for House Speaker Nancy Pelosi were forced to barricade themselves in a conference room and hide under a table as pro-Trump rioters ransacked the speaker’s suite of offices in Wednesday’s rampage in the Capitol, reported The Washington Post.

In a deep-dive account of Wednesday’s events, the Post details the security failures that allowed the mob seeking to block Joe Biden’s certification as president to overrun the seat of US democracy.

The Post reported that terrified staffers and lawmakers were still in the Capitol as pro-Trump protesters occupied the building and had to take extraordinary steps to safeguard themselves as the police presence was overwhelmed.

Pelosi, a California Democrat, is one of Trump’s staunchest opponents in Congress and a hate figure for the far-right and many Trump’s hardline supporters. In a speech to supporters ahead of the attack, Trump had urged them to march on the Capitol.Read more:Secret Service experts are speculating in group chats about how Trump might be hauled out of the White House if he won’t budge on Inauguration Day

Once they had broken through police lines and entered the Capitol, the report documents how protesters swarmed through the speaker’s 2nd-floor offices where eight staffers were working.

Barricaded inside the room, the staffers hoped the protesters “who had already broken down one door â€” and were rummaging through materials and shooting selfies with their feet up on an executive assistant’s desk â€” wouldn’t make it any farther inside,” reported the Post.

According to the report, the rioters were only seconds from accessing the Senate chamber, where some lawmakers were still present, before it was barricaded by law enforcement.

Pelosi has moved to impeach Trump for the second time in response to the riots that left five people dead. She told 60 Minutes in an interview to air Sunday that Trump is “deranged, unhinged, dangerous.”

Among the images on Wednesday’s chaos that went viral on social media was that of a Trump supporter, Richard Barnett, seated with his feet up on Pelosi’s desk. On Friday, theJustice Department announced that Barnett had been arrested in Arkansas on federal charges of entering and remaining on restricted grounds, violent entry, and theft of public property.

A rioter today wore a hoodie that says Camp Auschwitz on it. When Jewish people tell you they fear for their life, start believing them. pic.twitter.com/ejj5a1Ev2z

In another image, the Trump supporters were pictured holding up shattered pieces of Pelosi’s nameplate, with a man in the picture wearing a “Camp Auschwitz” anti-Semitic shirt.

Adam Johnson, who was photographed carrying Pelosi’s lectern through the Capitol, was also arrested on Friday by sheriffs in Florida.

He was charged with one count of knowingly entering a restricted building without lawful authority, theft of government property, as well as one count of violent entry and disorderly conduct on Capitol grounds, reported NBC News.