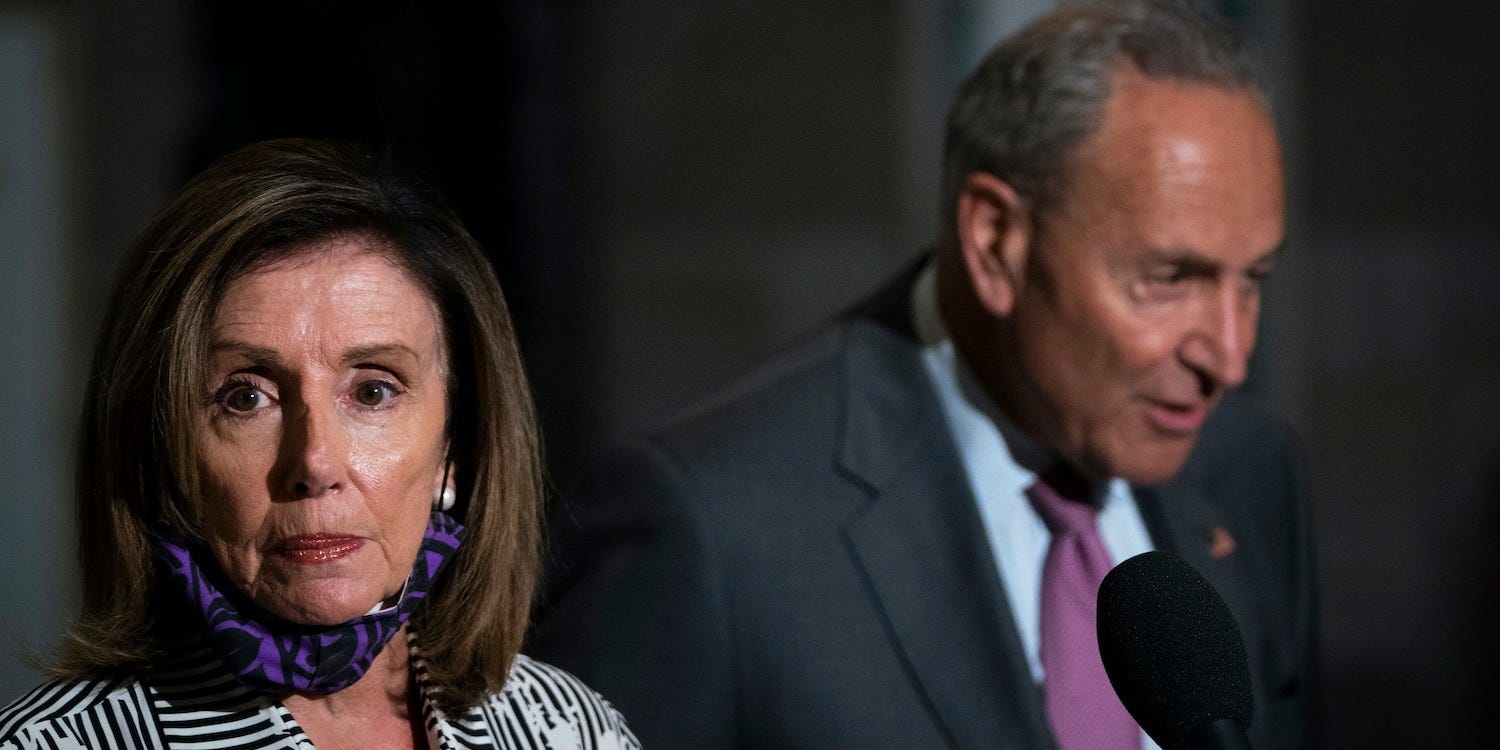 “For the sake of the country, we ask that you come to the table and work with us to produce an agreement that meets America’s needs in this critical time,” the Democratic congressional leaders wrote in the letter.

The pair illustrated some of the extremely difficult circumstances the US is facing as virus cases surge. They warn people, businesses, and hospitals are in dire need of more federal assistance.

“Meaningful relief requires aid to schools, small businesses, and individuals where the virus has torn through communities and left many stranded without help,” Pelosi and Schumer wrote. “Hospitals need more support to help save those who are sick and state and local governments need funding for essential workers and to distribute vaccines.”

They went on: “Millions of unemployed Americans and those facing eviction and hunger demand action from their leaders. The time to act is upon us like never before.”

The letter comes as congressional Democrats and Republicans have not negotiated on coronavirus relief so far this month. President-elect Joe Biden urged Congress on Monday to approve the $US3.4 trillion Democratic stimulus plan, though he didn’t offer possible areas of compromise with Republicans.

The Democratic-led House passed the multitrillion-dollar plan in May, but Republicans in the Senate dismissed it and never put it to a vote. The proposal includes another wave of $US1,200 direct payments for taxpayers, $US600 federal unemployment benefits, new small-business loans, assistance for state and local governments, and additional funds for virus testing and contact tracing.

McConnell slammed it on Tuesday. “Their so-called ‘HEROES’ proposal is so unrealistic and poorly-targeted that Speaker Pelosi’s own moderate Democrats ridiculed the bill the instant she put it out and said it would never become law,” the Kentucky Republican said on the Senate floor.

Congressional Republicans favour a $US500 billion plan instead, which Democrats already blocked twice over the last few months. It would provide assistance for small businesses and health funds, though containing less in federal unemployment benefits.

Pelosi had been negotiating with the White House on another large relief plan for months, and President Donald Trump had supported those efforts before the election. But the Trump administration is now pulling out of future talks with McConnell taking the lead.

Experts say the arrival of winter weather in many parts of the country presents a perilous moment in the pandemic because people will move indoors where the virus is more easily transmitted. Some states and local jurisdictions are reimposing new business closures and other restrictions to check the virus’s rapid spread.

Many economists and Federal Reserve officials have urged Congress to pass a new relief bill. The recovery is showing signs of slowing down, and the economy is still vulnerable. There are indications that Americans are pulling back on credit-card spending, and retail sales grew less than expected in October. Critical benefits for unemployed people are also set to expire next month without the passage of another plan.