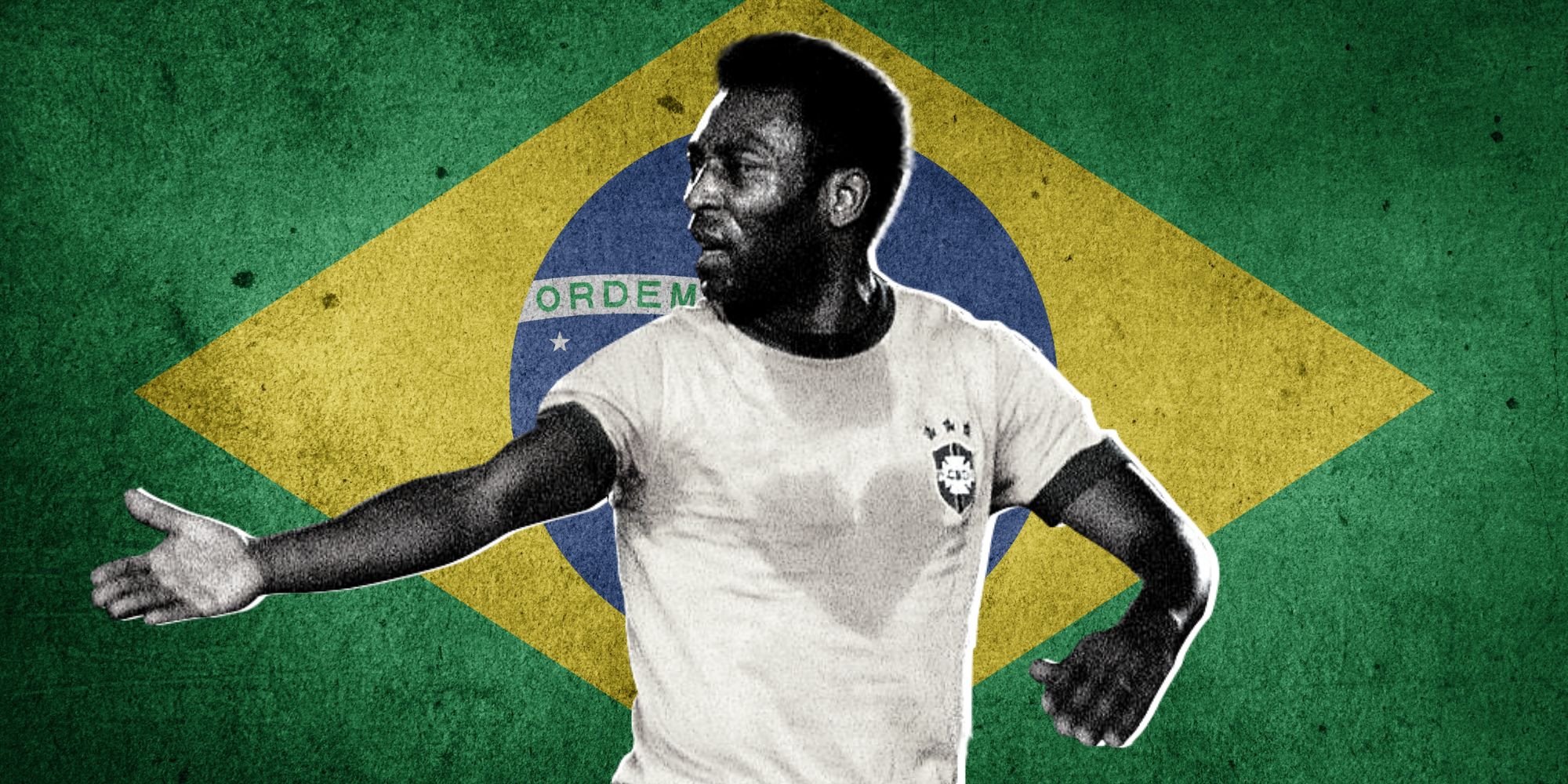 Edson Arantes do Nascimento, better known to the world as PelÃ©, claims to be greatest goal scorer in football history.

Whether or not he actually is remains contentious, however the Brazilian’s goal tally isn’t what makes him the sport’s most important ever player.

“It doesn’t really matter if Cristiano Ronaldo or Lionel Messi are better than PelÃ©,” David Tryhorn, the co-director of “PelÃ©,” a Netflix documetary about the star’s life and career, told Insider. “They may well be, but what they cannot do is walk in his footsteps.

“They can’t be the first, he’s the pioneer. He’s Elvis. He’s Neil Armstrong. He’s the first to do it.”

“PelÃ©” charts the star’s life from his birth in 1940 all the way to his triumphant World Cup victory in 1970.

The story begins in Bauru, Sao Paolo, where PelÃ© first harnessed his skills by playing with make-shift balls made of either a stuffed sock or a grapefruit.

The lack of a proper ball did not stop PelÃ©’s talent shining through, however. After starring for a number of local youth sides, he joined Bauru Athletic juniors, who were coached by former Brazil international Waldemar de Brito, where he guided the team to three consecutive state championships.

So impressed was Brito by PelÃ©, he decided to take him for a trial at Santos FC in 1956, where, according to FourFourTwo, he told the the club the youngster would become “the greatest football player in the world.”

After impressing during his trial, PelÃ© signed his first professional contract, aged just 15. 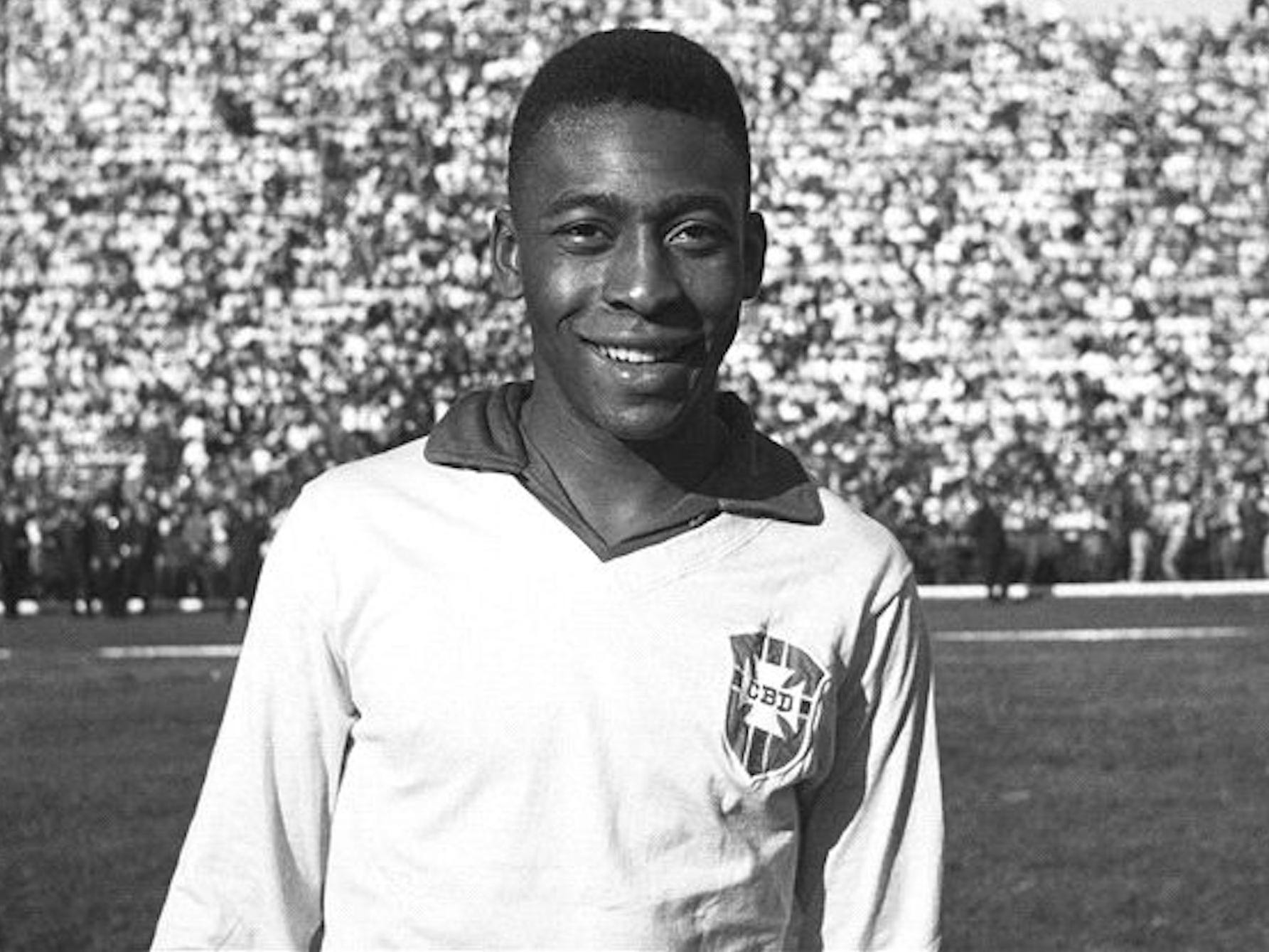 GettyPelé playing for Brazil in 1958.

“He arrived with such personality,” Dorval Rodrigues, a Santos player at the time, says during the film. “Once he arrived on the pitch, it was as if he’d been playing with us for years.”

Two seasons and two top scorer awards in the Campeonato Brasileiro SÃ©rie A later, PelÃ© was called up to represent Brazil at the 1958 World Cup. The spearhead of a new-look, flamboyant Brazil, PelÃ© scored five goals, including two in the final, as Brazil won the tournament for the first time in history.

A legend had been born.

“I was able to experience the joy that everyone felt, that Pele fever,” Brazilian politician Benedita Da Silva says in “PelÃ©.”

“You had poor boys in the favela who saw themselves in PelÃ©, and said, ‘I want to be like PelÃ©!’ Because he was the most inspiring image we that we’d ever had of a poor black boy.”

Between 1959 and 1961, Santos and PelÃ© became a circus act, travelling the world to take on the planet’s best teams in front of huge crowds, many of whom had simply turned out to catch a glimpse of PelÃ© himself.

Among the teams Santos played, and in many cases beat, on its tour of the world were Real Madrid, Barcelona, Juventus, Inter Milan, Munich, and Benfica.

Santos’ travels not only established the team as a global football superpower in its own right, but also helped put Brazil, a geographically massive but then poor and little known country, on the map.

“Something that Brazil owes Santos is that when we used to go on tour, we’d beat the best teams in Italy, Germany, and all across Europe,” PelÃ© says. “And people started talking about Brazil. Nobody knew where Brazil was until then.”

Such fame for PelÃ© and Brazil only intensified after the country won the World Cup again in 1962, even despite the fact PelÃ© was injured in the second game and unable to play the rest of the tournament.

“PelÃ© emerged at the moment of Brazil’s birth of a a modern country,” former president Fernando Henrique Cardoso says. “It was no longer a country that just exported produce, but a nation of industry, efficiency, and culture.

“And PelÃ© is not a supporting actor in this, he’s the protagonist.”

On the pitch, countries began playing rough to combat PelÃ©

In 1964, Brazil found itself under a dictatorship after the Brazilian military government, also known as the Fifth Brazilian Republic, overthrew President JoÃ£o Goulart.

As soon as it took over, the dictatorship began running the country with a brutal iron first â€” imposing a new and restrictive Constitution, censoring free speech, and using torture to silence oppositions groups.

PelÃ© was condemned by some at the time for his failure to stand-up against the tyranny. For others, however, he still represented a beacon of hope for the country, a torch which he carried going into the 1966 World Cup. 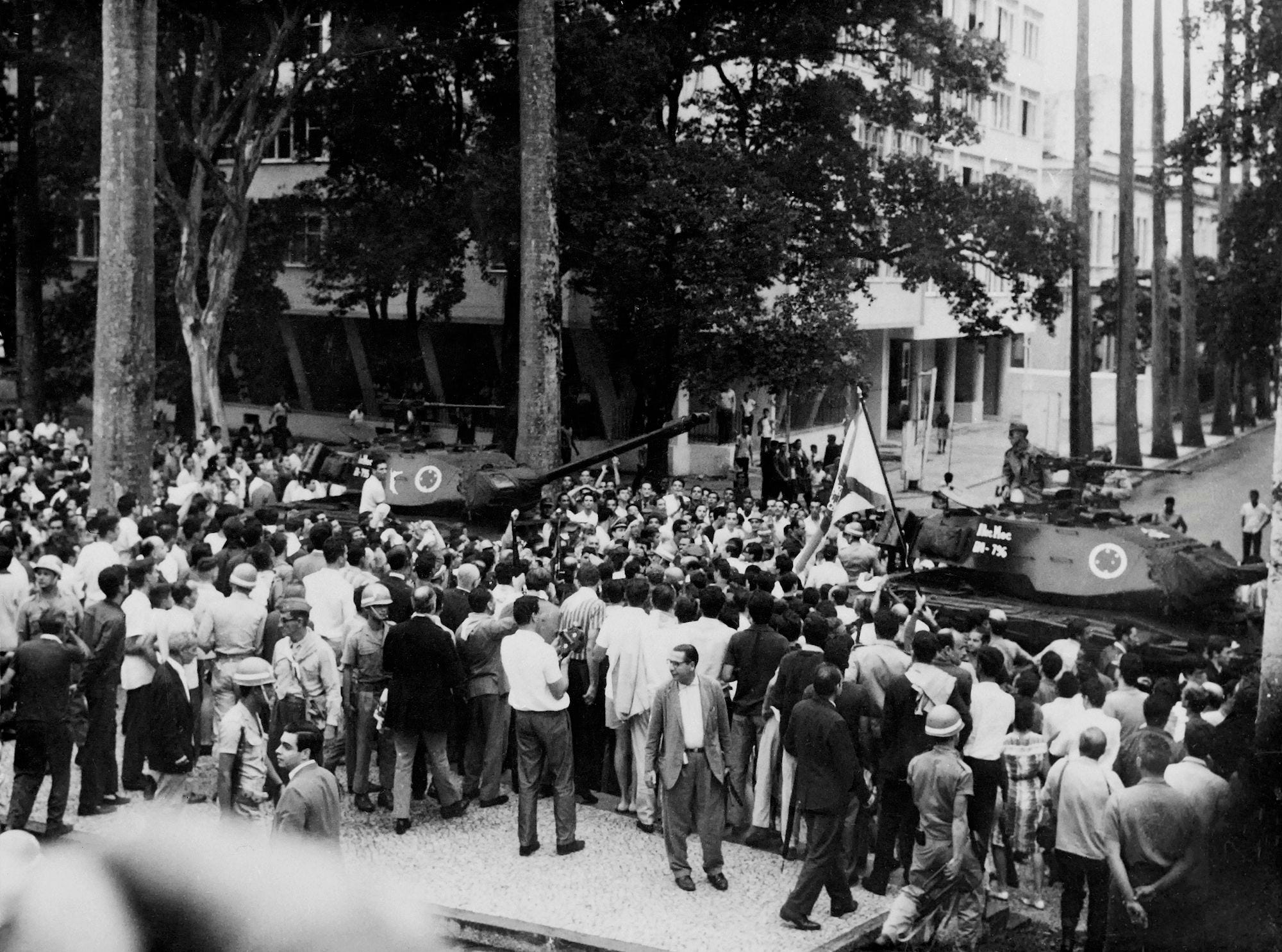 Having won the previous two, PelÃ© was hopeful of travelling to England and bringing home a third. This time around though, the opposition had become more wary of Brazil’s unique, skillful style of football, and had adapted.

“Football used to be more classic. Something for the fans, a spectacle,” PelÃ© said in an interview at the time. “Now teams only play for results. Football has become ugly, teams are playing harder.”

PelÃ© felt the full force of the new wave of defensive football in Brazil’s first game of the tournament against Bulgaria, when he was kicked each and every way by players desperate to stop him. As a result, he missed Brazil’s second game against Hungary, which it lost.

When he returned for the third and final group game against Portugal, PelÃ© was again injured, and with substitutes not allowed at the time, he played much of the game hobbling hopelessly around the field.

Brazil lost, and the two-time champion was out â€” a result that shook the nation to its core and saw PelÃ© vow to never play in a World Cup again.

He would have one final shot at redemption, however

While life continued mostly as normal for PelÃ© after 1966, for the majority of the Brazilian people, it sunk further and further into chaos.

As part of the act, police were now allowed to arrest citizens and detain them for 60 days without cause, while the president was also allowed to revoke the political rights of any citizen for up to a decade.

“It took away every possible freedom you could think of,” Roberto Muylaert, a Brazilian journalist, says in “PelÃ©.”

All that remained for many now was the escapism of football, something that was helped by PelÃ©.

While he remained politically silent, he did succumb to the influence of the government in one way: deciding (with a nudge) to play in the 1970 World Cup in Mexico, despite having previously said he was done with the tournament for good.

Not many believed Brazil would go far in Mexico, however, inspired by PelÃ© â€” who played a central role in Brazil’s fearsome front five alongside Jairzinho, Gerson, TostÃ£o and Rivelino â€” they would go on to win the tournament for a third time.

As PelÃ© lifted the Jules Rimet Trophy, he also lifted the nation of Brazil. 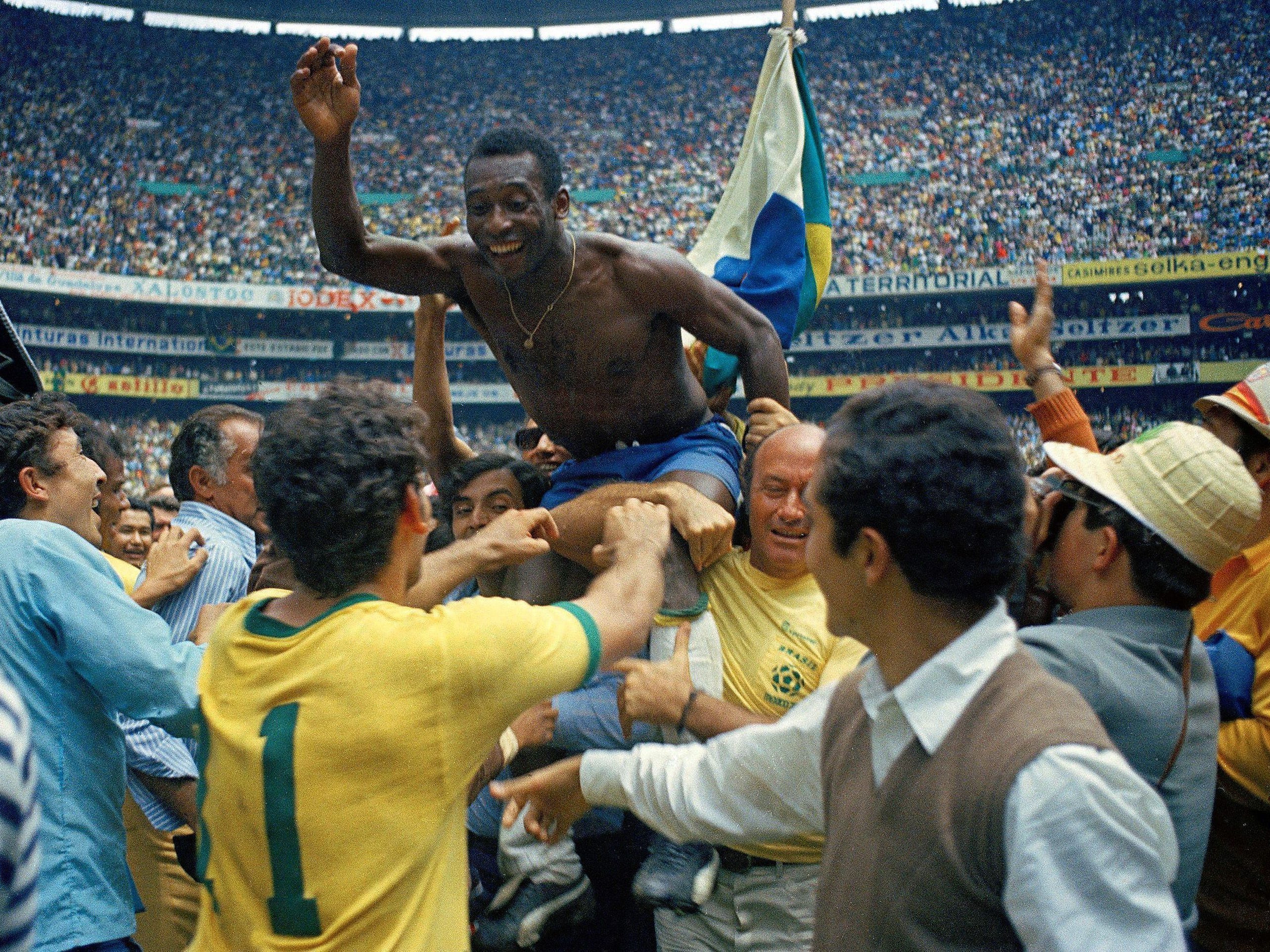 Getty ImagesPelé is lifted by fans after winning the 1970 World Cup.

“PelÃ© managed to solder his success with Brazil’s success,” says Fernando Henrique Cardoso of the triumph. “It was as if he was at war with a Brazilian flag in his hand. His legend is our legend.”

“The 1970 World Cup was the best time of my life, but I think it was more important for the country,” says PelÃ©. “Because if Brazil had lost in 1970, things could have become worse.

“The whole country could breathe when we became champions. 1970 definitely did more Brazil than it did for football. Without a doubt.”

PelÃ©’s legacy is like that of no other football player in history.

Not only did he force a change in the way the sport is played and helped place Brazil on the map, he also carried the hopes and dreams of his country throughout one of the worst periods in it’s history through the only way he knew how â€” football.

“PelÃ©” is available to stream on Netflix from February 23.