The leader of a far-right militant group says Republican Rep. Paul Gosar told him the US was in a civil war: 'We just haven't started shooting yet.' 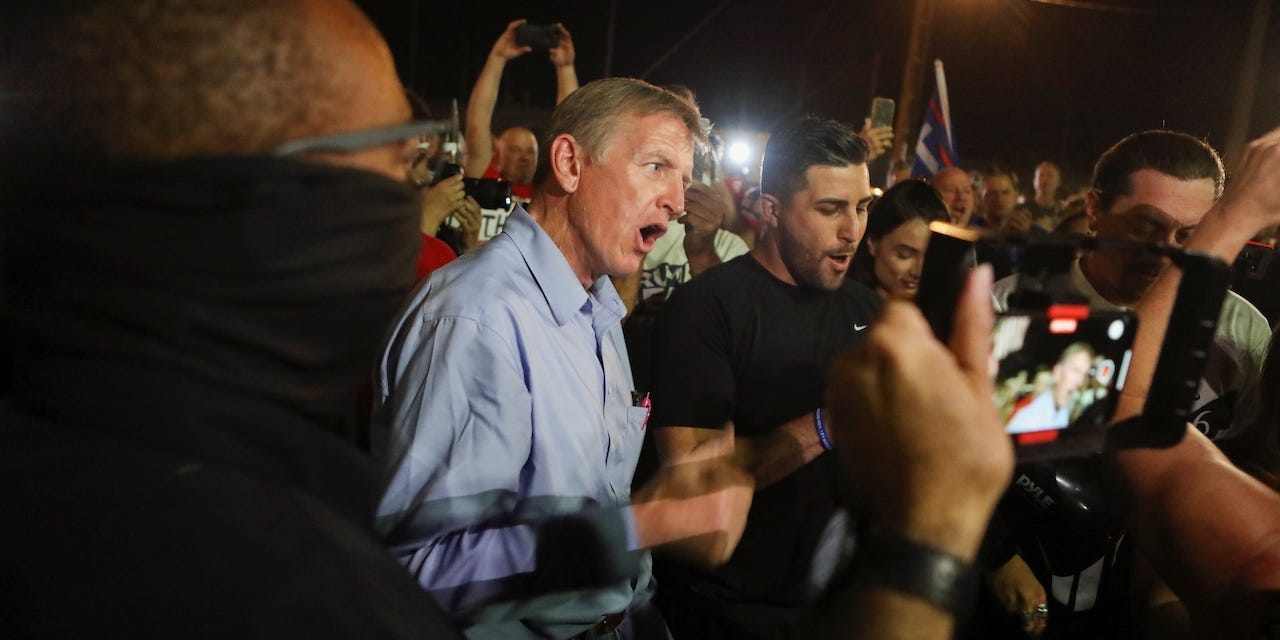 REUTERS/Jim UrquhartU.S. congressman Paul Gosar (R-AZ) speaks to supporters of U.S. President Donald Trump gathering during a protest about the early results of the 2020 presidential election, in front of the Maricopa County Tabulation and Election Centre (MCTEC), in Phoenix, Arizona, U.S., November 5, 2020.

Rep. Paul Gosar, an Arizona Republican, told a right-wing militant group that the US was in a civil war and predicted it would become violent, Jim Arroyo, the leader of an Arizona chapter of Oath Keepers, said in a Nov. 2020 video.

“We asked [Gosar] flat-out, at that time, do you think we’re heading into a civil war?” Arroyo said of his exchange with Gosar. “And his response to the group was just flat-out, ‘We’re in it, we just haven’t started shooting yet.'”

Arroyo used Gosar’s claim to back up his theory that the US was “in the begining phases of a full-scale, kinetic civil war” provoked by a “communist insurrection.”

“What we are witesssing in the United States right now is a Communist takeover, it’s an insurgency,” he said in the video, titled “The Coming Civil War?” “You need to prepare to defend yourselves, your families, and your neighbourhoods.”

Far-right activist Ali Alexander, who organised the January 6 “Stop the Steal” rally that preceded the deadly Capitol siege, says he planned the event with help from Gosar and two other GOP members of Congress, Reps. Mo Brooks and Andy Biggs. Gosar spoke at a rally in Pheonix that Alexander organised after the 2020 election to demand the results be overturned.

A spokesperson for Gosar didn’t immediately respond to Insider’s request for comment.

Gosar’s brother, Dave Gosar, told The New York Times this week that the congressman is “twisted up so tight with the Oath Keepers it’s not even funny.”

Six of Rep. Gosar’s nine siblings appeared in campaign ads denouncing their brother as an extremist and should be removed from office during his 2018 campaign for Congress.

Democratic members of Congress have raised alarms about some of their GOP colleagues who they say pose a threat to them in the weeks since the Capitol insurrection. Rep. Alexandria Ocasio-Cortez said last week that “a very considerable” number of Democratic lawmakers “still don’t yet feel safe around other members of Congress.”

“The enemy is within the House of Representatives, a threat that members are concerned about, in addition to what is happening outside,” House Speaker Nancy Pelosi said during a press briefing on Thursday. Pelosi said she was referring to members who’ve attempted to carry guns onto the House floor and those who’ve threatened violence against their colleagues.