Chiefs QB Patrick Mahomes' fiancée Brittany Matthews has built her own sports empire as a professional soccer player, part owner of a women's soccer team, and a fitness guru 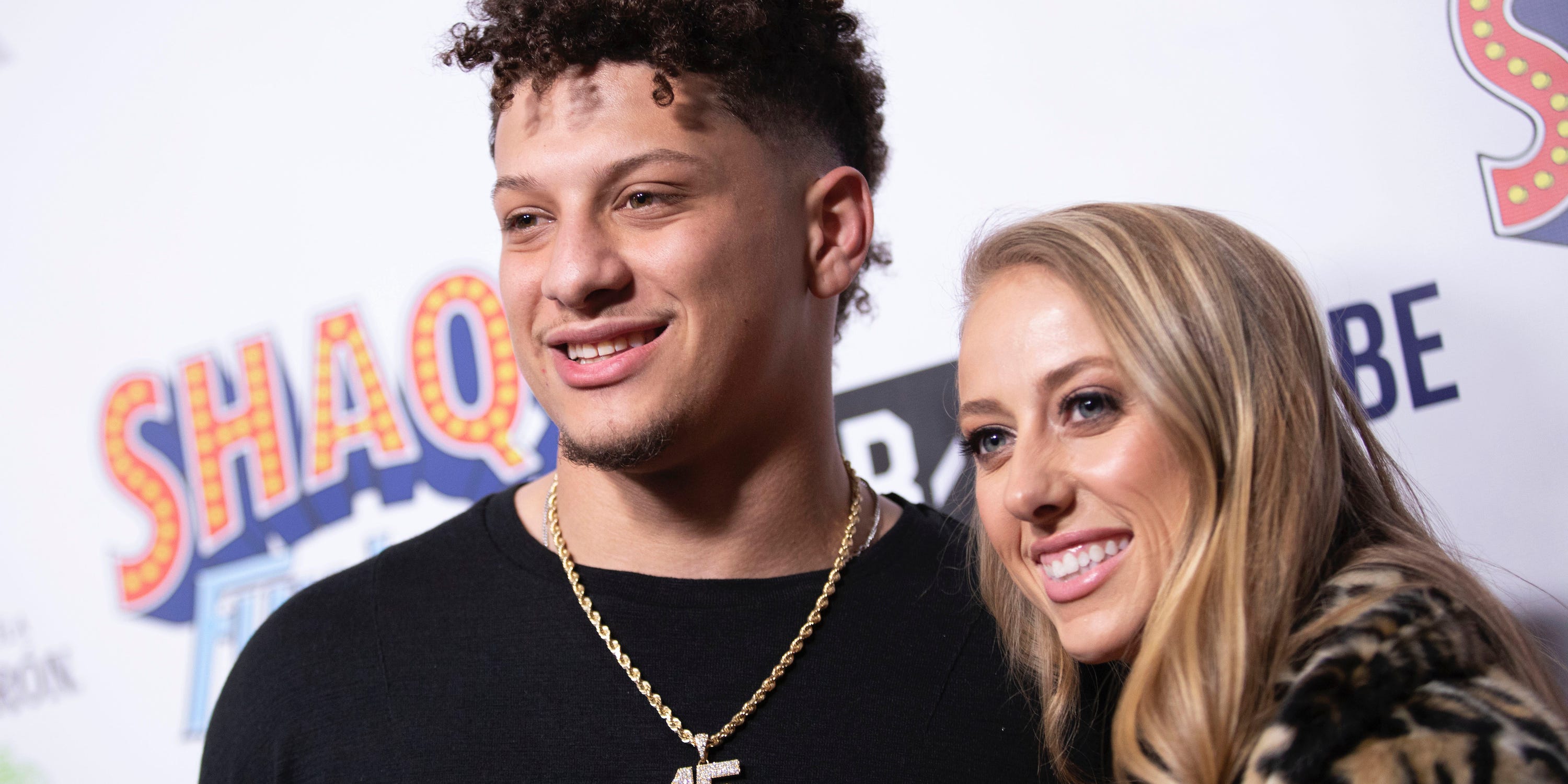 The couple announced the birth on Instagram with matching photos, saying their daughter, Sterling Skye Mahomes, was born at 3kg and 311.84g.

Matthews and Mahomes have been together since high school, and Matthews has been a dedicated Chiefs fan since Mahomes joined the team in 2017.

But outside of football, Matthews has created an athletic empire of her own by playing professional soccer in Europe and launching her own fitness company.

Together Mahomes and Matthews, who have been together since they were teens, are an athletic powerhouse.

Mahomes and Matthews started dating when they were in high school in Whitehouse, Texas

Mahomes, 24, and Matthews, 25, met in the while attending Whitehouse High School in Texas. According to Yahoo Sports, the pair started dating when Mahomes was in 10th grade.

When Mahomes signed to the Chiefs, Matthews signed on to play soccer in Iceland

The pair stayed together through the long distance. The Kansas City Chiefs selected Mahomes in the first round of the NFL Draft in April 2017. Matthews, meanwhile, graduated with a kinesiology degree and signed on to play soccer professionally with UMF Afturelding/Fram in Iceland in May 2017.

“Every coach I have had at UT Tyler made a huge impact on my love for this game and my decision to play professional soccer,” Matthews told the Tyler Morning Telegraph. “An opportunity opened up for me in Iceland and I could never pass up such an amazing experience to go do what I love.”

It’s unclear how long Matthews lived in Iceland, but it appears to be less than a year. Her team won its league in September 2017, according to Matthews’ Instagram, and by October 2017 she was in Kansas City.

Now they’re both pursuing their athletic dreams in Kansas City

The pair document their relationship on Instagram, and are pursuing their own athletic dreams.

In his first season as a starter for the Chiefs in 2018, Mahomes completed 5,097 yards and 50 touchdowns, and was named the NFL’s MVP for the season.

“I have experience with all levels of fitness and have carried that experience with me to create exercise programs for people at all stages on their fitness journey,” she wrote on the website. Her program, she continued, consists of  “working hard, staying dedicated, not making excuses, and most of all, no BS!”

Challenge yourself, not feel sorry for yourself????

She also became a part owner of Kansas City’s new women’s soccer team when the National Women’s Soccer League expanded to the city in December.

“I have a true level of appreciation for what these incredible women do on a daily basis,” Matthews said about the new team in a statement to the Topeka Capital-Journal. “We have the greatest fans and community here in KC and I can’t wait to huddle around this team.”

Mahomes proposed to Matthews in September 2020, after receiving a Super Bowl ring

Matthews and Mahomes attended the Chiefs’ Super Bowl ring ceremony together on September 1, 2020, during which Mahomes surprised his high school sweetheart with an engagement proposal.

Matthews, who had celebrated her birthday a day earlier, posted a photo of a section of the stadium that had been blocked off, covered in roses, with a sign that said “Will you marry me?” She later posted a photo of her ring.

On September 29, 2020, Matthews and Mahomes announced they were having a baby, and shared images of the ultrasound Instagram.

They held a gender reveal party in October 2020:

Mahomes and Matthews welcomed their first child in February 2021

Mahomes and Matthews announced the birth of their daughter, Sterling Skye Mahomes, on Instagram on February 21, sharing matching photos on each of their accounts.

In the photo, Matthews is wearing a necklace that says “Sterling.”

Mahomes and Matthews want to stay in Kansas City for a ‘long, long time’

The couple bought a house in Kansas City in 2019, spending $US1.925 million in the city’s Mission Hills neighborhood. The pair showed the house off on Bleacher Report and highlighted Mahomes’ custom shoe gallery, where he stores around 180 pairs of shoes.

In the video, Mahomes and Matthews explained their love for Kansas City.

“Setting down roots in Kansas City was huge for us. I think the people are what we love the most about Kansas City,” Mahomes said. “We’re trying to be here for a long, long time.”

The couple spends the offseason in Kansas City and recently launched a foundation to help underprivileged youth.

Mahomes told USA Today: “The fans come out every single week and show passion and love for us and our team and what we’re doing here, so for me, I want to be back in the community, giving back. And just be a part of it, to show the same love and passion to them.”

YOU DID IT BABE❤️???? #chiefskingdom

Ahead of the Super Bowl last year, Mahomes told reporters he “ended up in the perfect place” when he was drafted by the Chiefs.

He took the Chiefs to their second-consecutive Super Bowl in February 2021, though the team lost to the Tampa Bay Buccaneers.