Patrick Mahomes has been an NFL starter for just one season, but he has already shown that he could be the next great NFL quarterback.

The second-year quarterback led the NFL with 50 touchdown passes this season, joining Peyton Manning and Tom Brady as the only players to ever reach that mark.

With all the praise for his stellar play, Mahomes has managed to stay grounded. In speaking with Lisa Salters of ESPN recently, Mahomes explained that he had done this with the help of his teammates who are not above making fun of his voice.

“If I’m ever getting too big of a head, they just kind of bring out the voice, you know – they try to mimic my voice,” Mahomes said. “That’s kind of gotten its thing in the locker room.”

Some have described Mahomes’ voice as sounding like Kermit the Frog. But we would never say that to his face.

But here’s the real kicker. When Salters asked who imitated the voice the best, Mahomes had an eyebrow-raising answer: Andy Reid, the Chiefs’ head coach.

“Coach Reid does,” Mahomes said, adding, “He has the perfect imitation of the voice.”

However, Mahomes said Reid would never do the voice in front of other people, so we will have to be content imagining the coach doing the imitation.

You can hear Mahomes’ voice and his comments here, via ESPN: 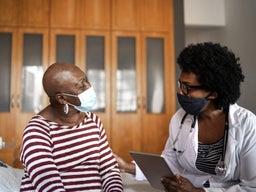