Pastors are leaving their congregations after losing their churchgoers to QAnon 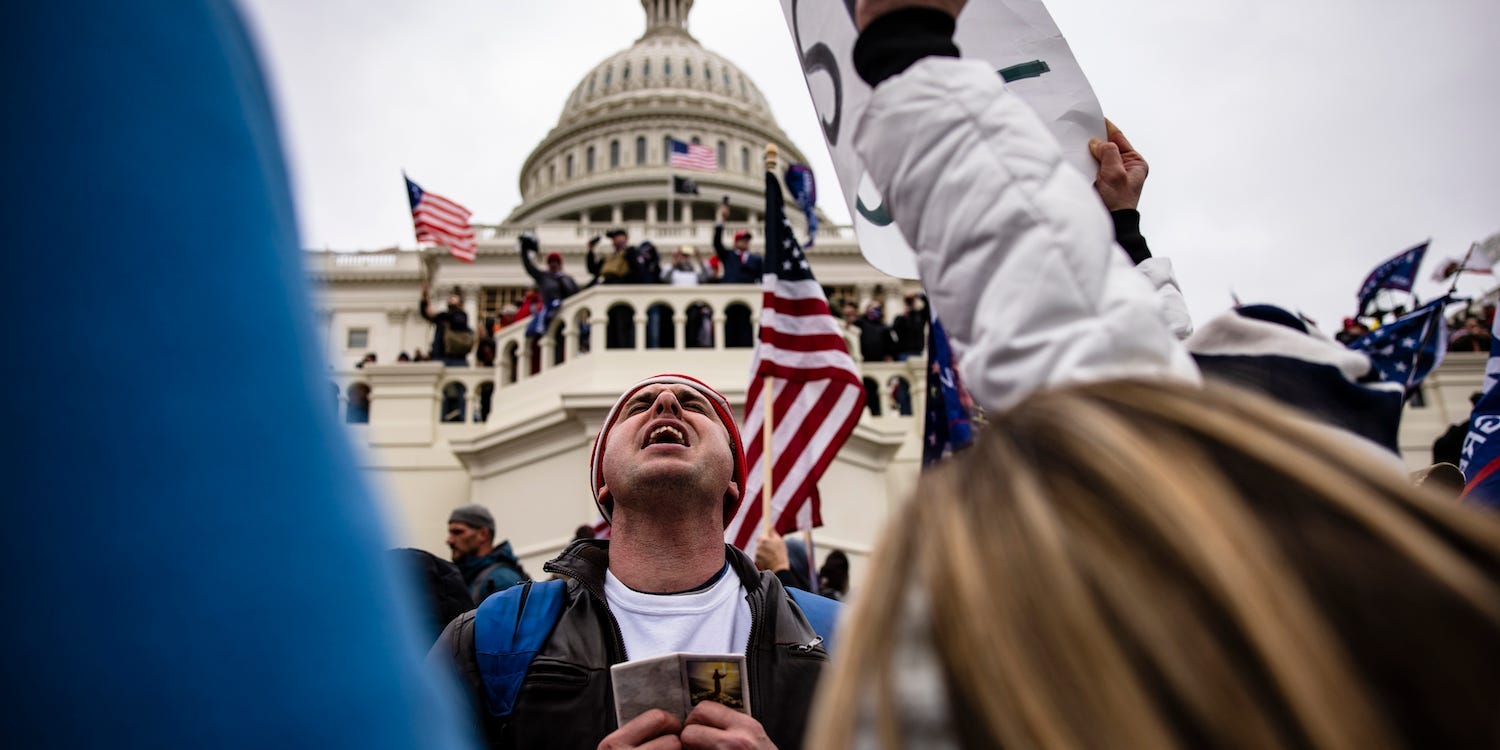 The Christian Reformed Church pastor from Michigan had been watching for months as some members of his congregation grew captivated by videos about the QAnon conspiracy theory on social media, openly discussing sex trafficking and Satan-worshipping pedophiles.

He had watched as other spiritual advisors, including the self-proclaimed “Trump Prophet” Mark Taylor, incorporated wild and dangerous QAnon beliefs into their sermons on YouTube and as organizers of the Christian Jericho March gathered in Washington, DC, days before the insurrection, urging followers to “pray, march, fast, and rally for election integrity.”

So when hundreds of President Donald Trump’s supporters stormed the Capitol hours after his premonition, Swieringa was shocked, but not surprised.

“I think some of the signs had been there all along, and it just all came to a perfect storm,” Swieringa told Insider. 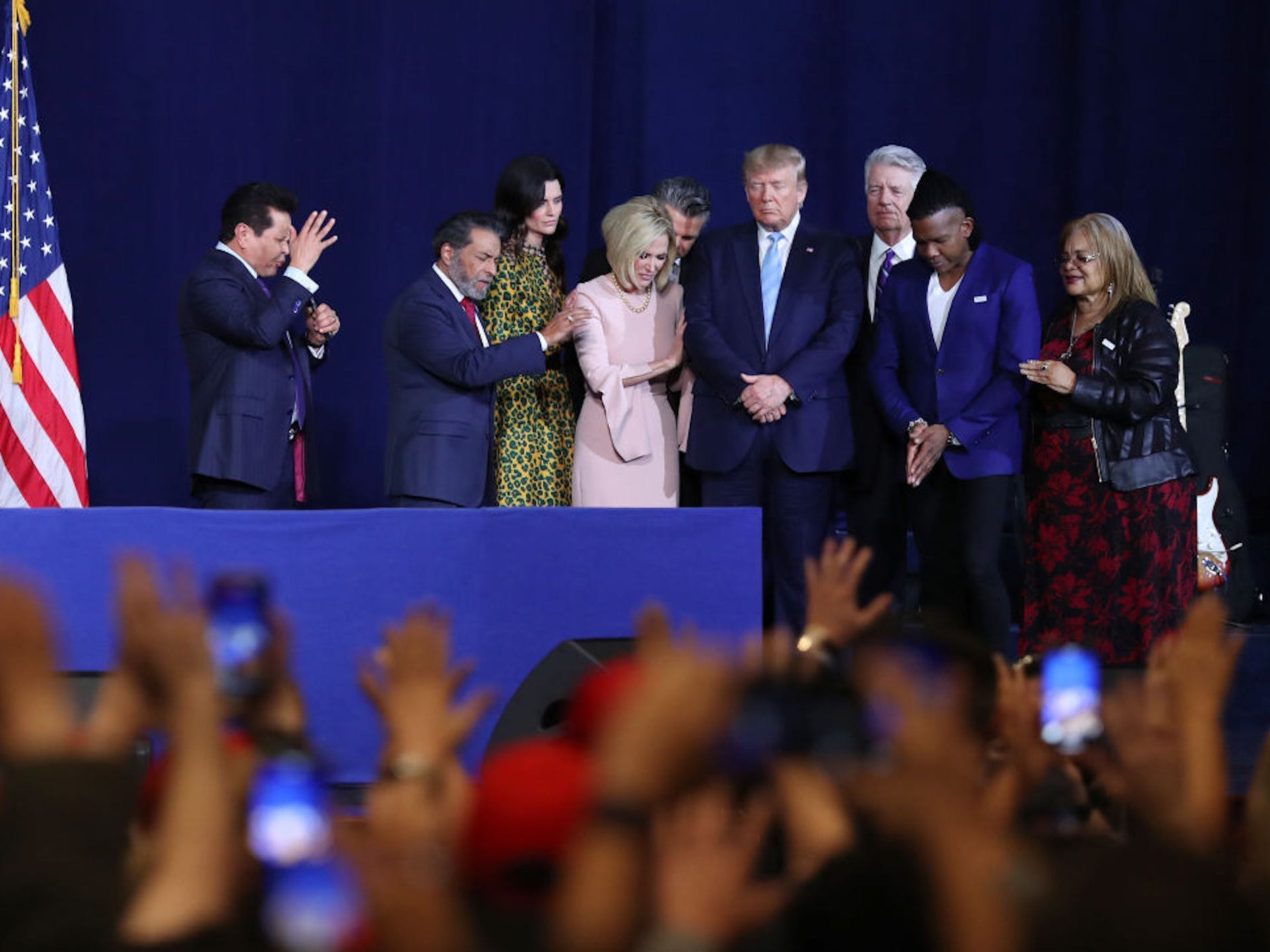 Joe Raedle/Getty ImagesFaith leaders praying over Trump during a campaign event at the King Jesus International Ministry in Miami on January 3, 2020.

The pastor said he had been worried about so-called Christian nationalism since Trump was elected in 2016. (Neither Swieringa nor any of the other pastors interviewed for this story say who they voted for in 2016 or 2020.)

He became even more concerned when, in 2018, some older members in his own congregation started sending him what he described as “disturbing” QAnon videos. When Swieringa brought these to the attention of his superiors, he said, they were mostly dismissive, telling him they didn’t know what QAnon was.

But when the coronavirus pandemic hit last year, the problem grew larger and a lot more personal.

Swieringa felt increasingly uncomfortable when a large part of his congregation dismissed the pandemic as a hoax.

The 61-year-old pastor had been taking the pandemic very seriously, he said, partly because his wife was considered at risk. A bout of pneumonia in 2019 had left her with permanent scarring in the lungs.

He said the church offered to him a plexiglass barrier to preach behind, but he felt it wouldn’t make much of a difference in an enclosed space.

“We agreed to separate at that point, and so it felt pretty cordial at the time,” Swieringa said. “But I found out later that there were really hard feelings amongst the congregation, and many of them felt like I abandoned them. It was heartbreaking.”

Swieringa left the church in December after eight years of service.

He now works part time at the Kibbie Christian Reformed Church in South Haven, 48km away from his original job. His new church has a mandatory mask rule.

Swieringa is not the only pastor to struggle with the rapid spread of conspiracy theories and misinformation in his congregation.

A poll released in January by the Christian research organization Lifeway Research found that more than 45% of protestant pastors said they had often heard congregants repeating conspiracy theories about national news events.

Another survey by the conservative American Enterprise Institute found that more than a quarter of white evangelical respondents believed in QAnon and that three in five believed that President Joe Biden’s win in the 2020 election was “not legitimate.” Those rates were the highest in any religious group.

The trend has prompted hundreds of evangelical pastors and faith leaders to speak out. In February, more than 1,400 of them published an open letter condemning “radicalized Christian nationalism” and the “rise of violent acts by radicalized extremists using the name of Christ,” The Washington Post reported. 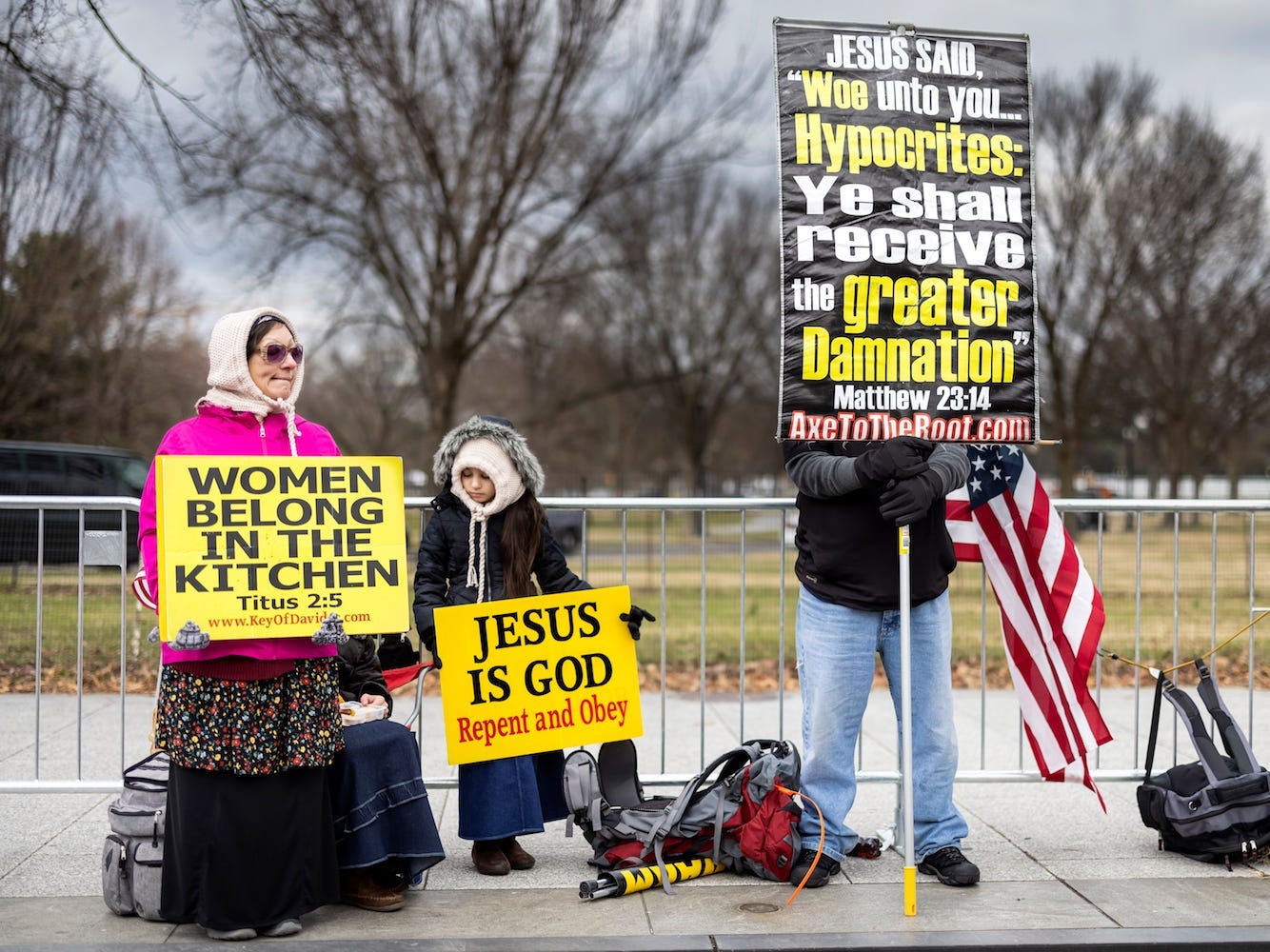 Brent Stirton/Getty ImagesTrump supporters outside the Capitol on January 6.

Among them is Jared Stacey, a Southern Baptist youth pastor from Virginia who ended up leaving the church altogether after QAnon and other conspiracy theories began to divide his congregation.

He moved to Scotland in December, where he now studies theology at the University of Aberdeen.

He told Insider he left to “create some space,” adding that pastoring in 2020 was “a struggle” for many faith leaders.

“I do think that a lot of pastors are burdened right now and need a friend,” Stacey said. “It’s not easy watching people that you’ve invested time in becoming radicalized so quickly right in front of you.”

He said that while some people might say politics shouldn’t be discussed in churches, there comes “a point where refusing to talk politics is a false front for protecting the political sensibilities of your stakeholders.”

“That is why there is a theological need to address what the Bible would describe as telling lies or having a false God,” he added.

But keeping up with the information online is not always easy, and Stacey worries that the church is falling behind in the race to bring Christian messages to a world that spends most of its time online.

“The church is going through the biggest information shift since the printing press,” Stacey said.

The road to recovery from QAnon

One person trying to use technology to reach more Christians who have become affected by QAnon is Derek Kubilus, the senior pastor of Uniontown United Methodist Church in Ohio.

Kubilus runs the “Cross Over Q” podcast, which offers “healing for QAnon followers and family members from a Christian perspective.”

The pastor started the podcast after the Capitol riot and has received a wide range of listeners, including former QAnon believers who have told him that the podcast has been part of their recovery.

“When I saw crosses being carried alongside QAnon banners and a noose as those folks marched on the Capitol I just knew I had to do something, but from a Christian perspective,” Kubilus told Insider. 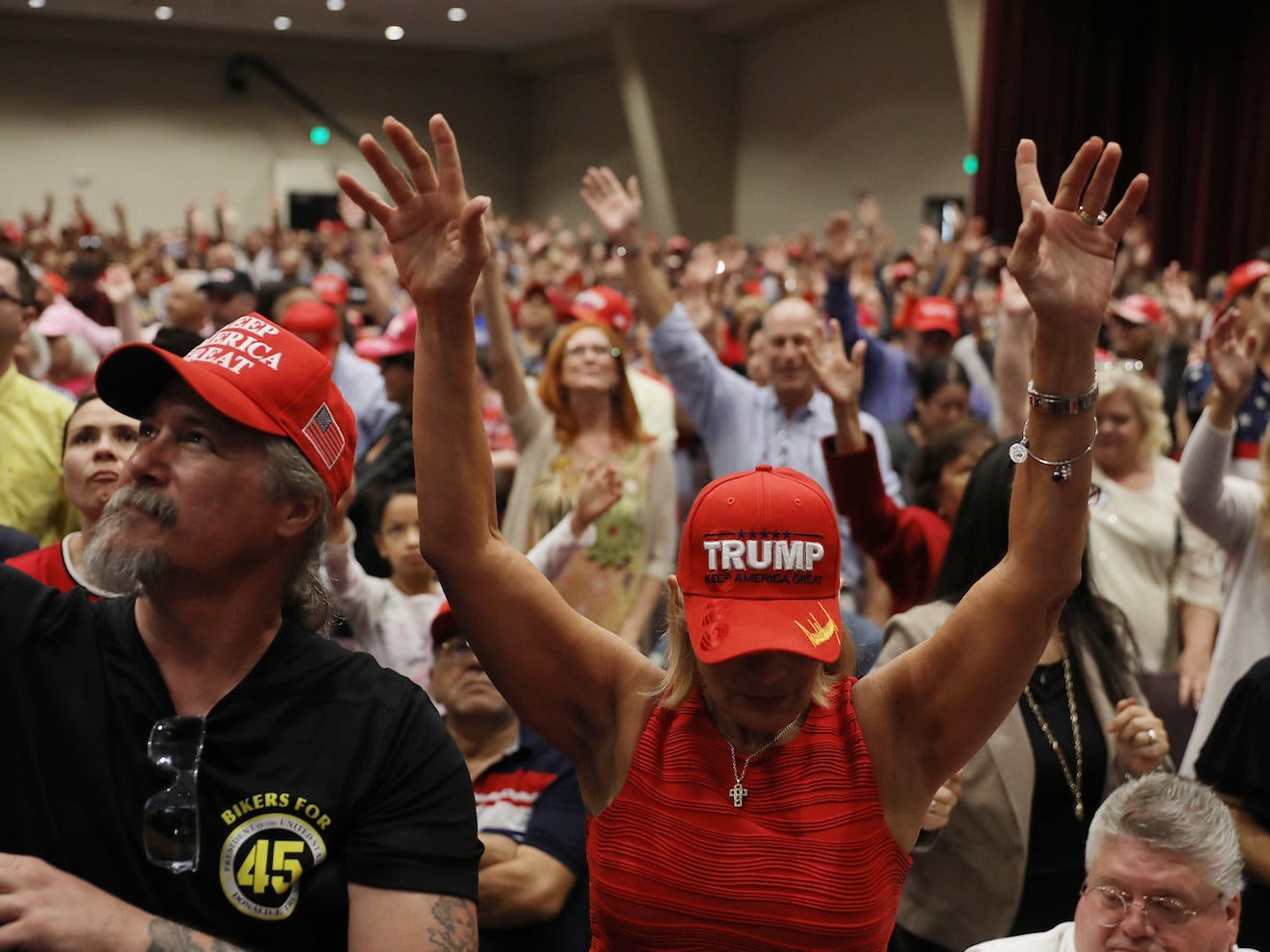 Joe Raedle/Getty ImagesA woman praying during the ‘Evangelicals for Trump’ campaign event in Miami on January 3, 2020.

While some pastors, including Stacey and Swieringa, opted for private conversations with their congregants to warn against the dangers of misinformation, Kubilus does it publicly.

In his podcasts, he debunks theories, speaks about how they’re dangerous, and preaches about the importance of unity.

“Members of the clergy are expected to maintain a certain kind of distance from secular politics … both in order to preserve the unity of our congregation, and to make sure that we don’t unduly influence elections,” Kubilus said.

“But I don’t believe that QAnon is inherently political. It starts with politics, but these are people’s lives, in relationships, that we’re talking about.”

Kubilus is aware that the recovery from QAnon radicalization is by no means a short one, but he’s hopeful that his efforts will bring Christians back home eventually.

“It takes a lot of courage, time, and patience,” he said. “But when you hear the stories of people who are being hurt, in the families that are falling apart, you recognize that it is absolutely necessary.”