This new drone has a ton of useful features, and it looks like a blast to use Parrot’s Disco FPV drone lets you soar the skies and fly a drone-style remote-controlled aeroplane from the comfort of terra firma, and it looks like an absolute blast.

The Parrot Disco is remote-controlled drone that's more like a plane rather than a helicopter like most drones. Instead of using multiple propellers to lift like most helicopter-style drones, the Disco uses one propeller, like a single-propeller aircraft. You launch it by throwing it into the wind, like this:

It screams at a top speed of 50 miles per hour.

And its battery lasts for up to 45 minutes of flight time, which is longer than most standard drone flight times of around 25 to 30 minutes. The battery is also removable, which means you can swap in a fresh battery. It's made of carbon and plastic, which gives it a light weight of 1.65 pounds. And its wings are removable so you can store it more easily or replace damaged ones. The Disco has a front-facing 1080p camera to capture video to the on-board 32GB of storage, which should allow you to record more than four hours of 1080p video. The camera also streams directly to an Apple or Android smartphone or tablet mounted on Parrot's Skycontroller 2 in 720p or 360p so you can see what it sees while you fly it with Parrot's FreeFlightPro app. You can also use Parrot's 'Cockpit Glasses' headset, which holds your phone to your eyes to stream video from the Disco like a VR headset. The headset comes included with the Disco. This makes you feel like you're in the cockpit of an aeroplane, and it looks like a ton of fun.

The wireless Skycontroller 2 looks like an Xbox controller with heavy-duty thumb-sticks. You can also use the FreeFlightPro app to set a flight plan on your smartphone or tablet. The Skycontroller 2 has a range of up to 2 kilometers, or about 1.25 miles, due to its powerful built-in WiFi antenna facing outwards. That's a longer range than the highly-rated DJI Phantom 4 drone. Just remember that regulations only allow you to fly drones up to an altitude of 400 feet! The Disco connects to the Skycontroller 2 by broadcasting its own WiFi network.

To land, you press the Return Home button on the Skycontroller 2 to make the Disco come back to the point where you launched it.

All that fun will cost you $1,299, which is expensive, but it's in the similar price range as other top-end drones. Check out the Disco's maiden flight in the USA from CES 2016. 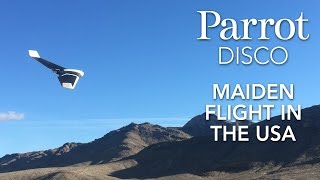 And flying two or more Discos together looks like enormous fun.