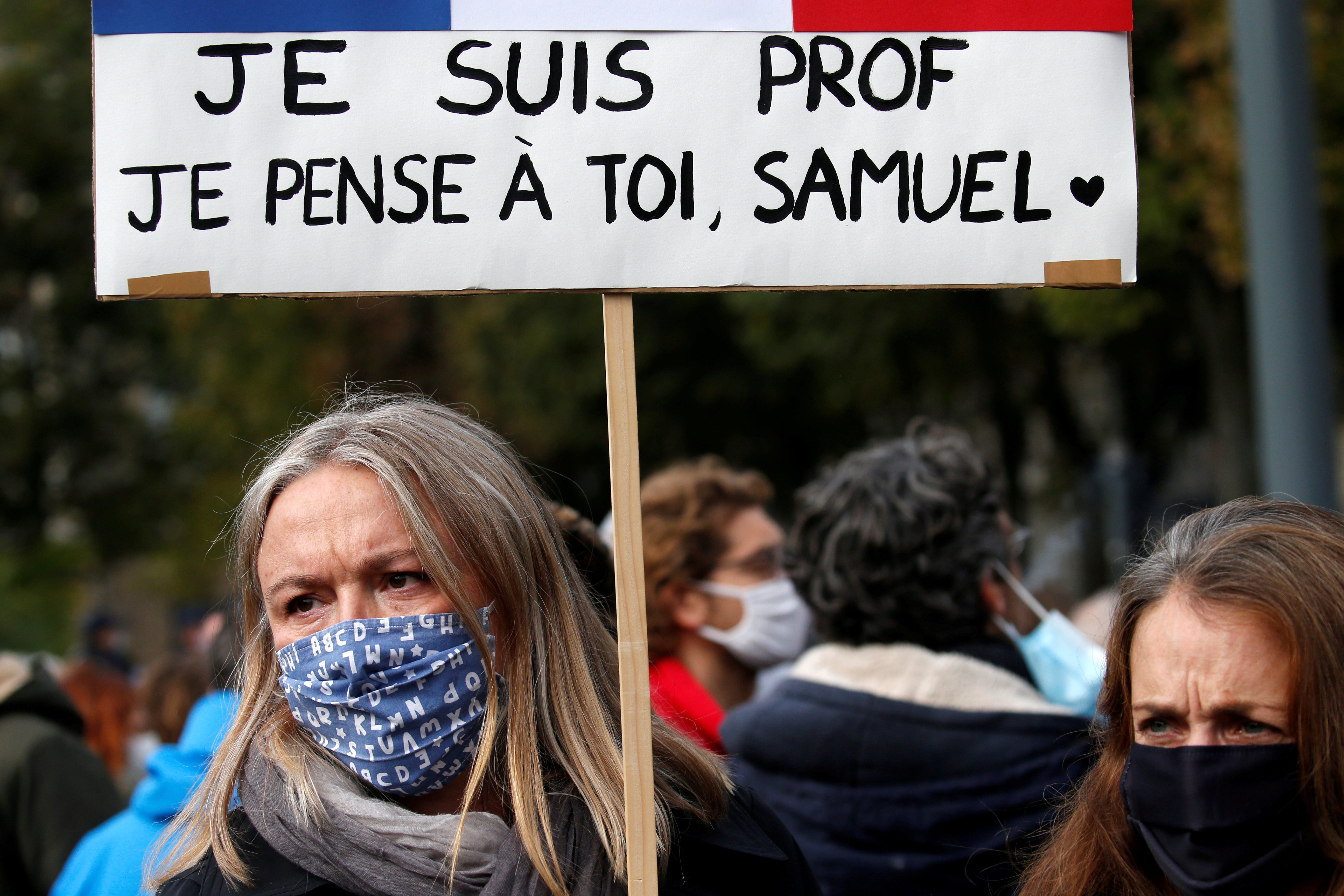 REUTERS/Pascal RossignolA woman holds a banner as she attends a tribute to Samuel Paty, the French teacher who was beheaded on the streets of the Paris suburb of Conflans St Honorine, at the Place de la Republique, in Lille, France, October 18, 2020.

The French government said Tuesday it would bring social media giants “under control,” following the role that online platforms played in the beheading of a history teacher in Paris on Friday.

Moments after Samuel Paty, 47, was killed, a picture of his head was posted on Twitter. Before his death, videos of him showing caricatures of the Prophet Muhammad in a class about free speech were circling on social media.

He was killed in what President Emmanuel Macron has called the killing an “Islamist terrorist attack.”

“Things began on social media and they ended on social media,” Gabriel Attal, the French government spokesman, said Tuesday. “We have to do better at bringing them under control.”

Attal added: “Those who participated in the public lynching of this teacher on social media are in some way also responsible for what happened.”

The government on Monday called in representatives of Facebook, Twitter, Google, TikTok, Snapchat, and other social media firms for a meeting on “cyber-Islamism,” asking them to take more responsibility for content on their platforms.

Four students in France have been detained in connection with the attack on Paty. The Paris police later shot dead the suspected attacker â€” identified by local media as Abdoulakh Anzorov, an 18-year-old Chechen refugee â€” near the scene of the attack.

Paty, a 47-year-old teacher, had shown his pupil’s caricatures of the Prophet Muhammad from the satirical newspaper Charlie Hebdo as part of an obligatory “moral and civil education” course before he was decapitated.

A father of one of the pupils at the school, had posted three videos of Pay before the killing, asking for him to be fired and listing the school’s address, per the Financial Times.

In the third video, the man was accompanied by Abdelhakim Sefrioui, an Islamist militant already deemed a security risk by French intelligence.

Anzorov tweeted after the attack: “From Abdullah, the servant of Allah, to Macron, the leader of the infidels, I executed one of your hell dogs who dared to belittle Muhammad.”

GÃ©rald Darmanin, interior minister, said Monday there were 80 investigations into those who justified Paty’s death and suspected extremists accused of spreading online hate, per The Guardian.