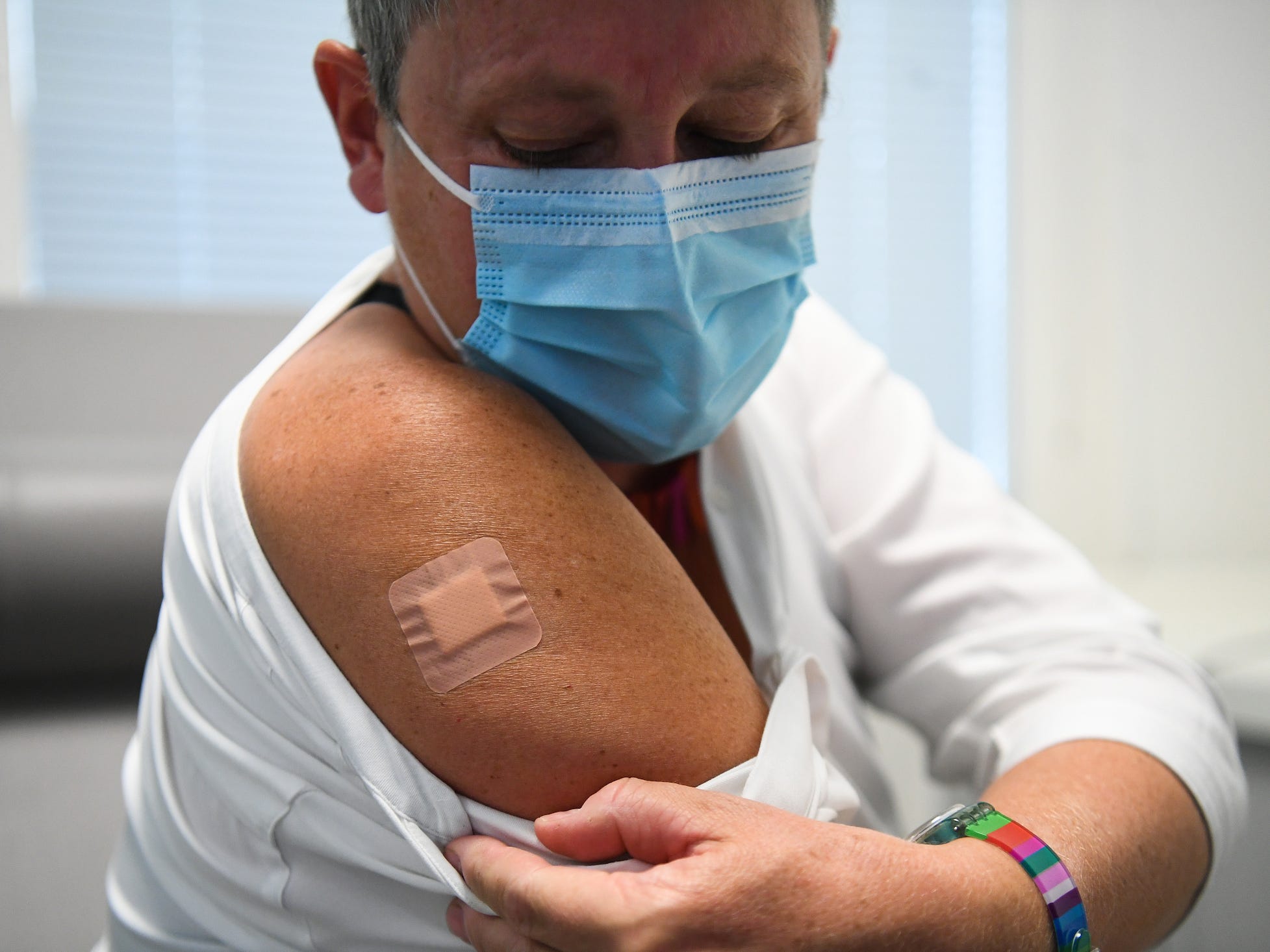 Kirsty O’Connor/PA Images via Getty ImagesKate Bingham, the chair of the government’s vaccine task force, after starting her Novavax trial at the Royal Free Hospital in London on October 13.

The COVID-19 vaccine candidate being developed by the University of Oxford and the UK pharmaceutical company AstraZeneca produces an immune response and is safe in adults over 55, promising early trial results published in The Lancet on Thursday suggest.

The data from 560 trial participants suggested the vaccine was “well tolerated” across all age groups and had similar effects on the immune system of both younger and older adults.

This is positive news because the type of vaccine the group is working on â€” known as an adenovirus-vector platform â€” has either not been tested in older people or, when it has been tested, has shown worse results in them compared with younger people.

None of the participants in the trial had any unexpected, serious adverse reactions.

Whether the shot is effective at protecting people against COVID-19 remains unknown, but results from Oxford’s late-stage trial, known as phase 3, are expected in a matter of weeks.

“We’re getting close and it’s definitely going to be before Christmas,” Andrew Pollard, the professor of pediatric infection and immunity at the University of Oxford who is director of the Oxford Vaccine Group, said in an interview with BBC Radio 4’s “Today” program on Thursday.

“I think the reason we are so delighted is that the immune responses look exactly the same, even in those … over 70 years of age,” Pollard said.

“The other thing that we found, which I think is extremely important is that the vaccine is extremely well tolerated in those who are over 55.

“We do know with these vaccines that adults tend to feel a bit ropey in the day after they have been vaccinated. But that was very very much less, particularly in those who are over 70.”

Scientists from the University of Oxford and AstraZeneca began working on the vaccine in January, and started human trials in April. Phase 3 trials studying the effectiveness of the vaccine started in August.

The Oxford-AstraZeneca group is behind Pfizer and Moderna â€” both of which announced positive results of their late-stage coronavirus vaccine trials earlier this month â€” because of a drop in COVID-19 cases over the summer in countries where trials are ongoing. This means trial participants were less likely to contract COVID-19, and cases are necessary to identify whether a vaccine is more effective than a placebo.

“We have to have some cases occurring, at least in the control group in the study, in order to be able to assess whether the vaccine works,” Pollard said.

The UK government has already ordered 100 million doses of the vaccine, alongside 40 million from Pfizer and 5 million from Moderna.

But there is no competition between the drugmakers, Pollard said.

“We have a lot of people to protect around the whole globe,” he said.