In 2010, Gabriella and Andrew Morrison had just moved into what they thought was their dream home in a coveted neighbourhood in Southern Oregon.

But six months later, they were already regretting their decision.

“We began to feel like our dream was actually a nightmare,” Gabriella told Business Insider. “The amount of stress that was involved with having to work more to pay for it compounded with feeling like slaves to it begged the question, ‘Was it really worth it?'”

Soon after, the couple learned of the tiny house movement by way of Jay Shafer’s “The Small House Book” and realised that they wanted to live with less. So they got rid of 90% of their possessions, sold the house, and moved to Baja Mexico for five months, where they resided in a pop-up tent trailer.

“From that experience, we saw that we were happiest with the least and we committed to designing and building a tiny house for ourselves,” Gabriella told us.

When the couple moved back to Oregon, they began designing and building their own tiny home.

“At first, friends and family were sceptical of what we were doing,” Gabriella said. “Hardly anyone had heard of the tiny house movement at that point and I think they thought we were being unrealistic.”

But four months later, their new 221-square-foot tiny home was complete. The couple spent $US22,744 building the home, plus another $US10,345 on cabinetry from IKEA and appliances. Gabriella and Andrew were so inspired by the experience that they started TinyHouseBuild.com to teach people how to make their own tiny homes.

They now live on five acres of rural land that they bought in Oregon, and share the space with their daughter, cat and dog. Neither of the Morrisons can imagine moving anywhere else.

“We designed it to be a forever home,” Gabriella told Business Insider. “We also plan on spending six months out of each year down on the beaches of Baja again so we will split the time between two places.”

Gabriella and Andrew Morrison built their 221-square-foot tiny home on five acres in Southern Oregon. It took them four months and cost $33,089.72. They call it a 'hOMe' with the emphasis on 'om' (a mystic symbol -- think yoga and meditation). Because the weather can get cold, the family stays warm with two 100-gallon propane tanks they refill every six or eight months. Inside, the small house feels light and airy with nearly 12-foot ceilings and plenty of windows. This is the couch and seating area where family members can eat or work on their laptops. If they want more space, the countertops can fold away when not in use. One feature that was important to them was having a fully functional kitchen. It has four burners, a full oven, a full refridgerator and room for ample storage. There's also a lot of countertop space and even a wine rack. The Morrisons really pride themselves on keeping their tiny home clutter-free. For a toilet, they use a composting toilet from Sweden called the Separett. The shower is also pretty roomy. To get to the lofted upper level, the family can climb a ladder or use the staircase. The lofted space adds another 128 square feet. Because they didn't want any space to be wasted, the stairs also double as more storage space. Here's a view of the lofted bedroom, which is 10 feet deep and eight feet wide. The Morrisons spend a lot of time in their beds, either reading or working. They bought bed loungers so they could comfortably sit upright in bed. The bedroom also has two full sets of dressers for both of the Morrisons. On the other side of the house is a secondary loft where the family can hang out and watch movies. Check out a full video of Andrew Morrison showing off the home, and get more information about the hOMe at their website TinyHouseBuild.com. 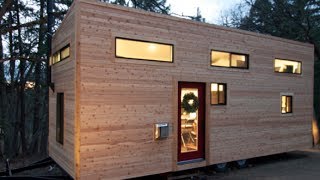 This couple quit their jobs, built a tiny house, and earn their living by blogging about their cross-country adventure >>