18 mind-boggling optical illusions you can find in nature 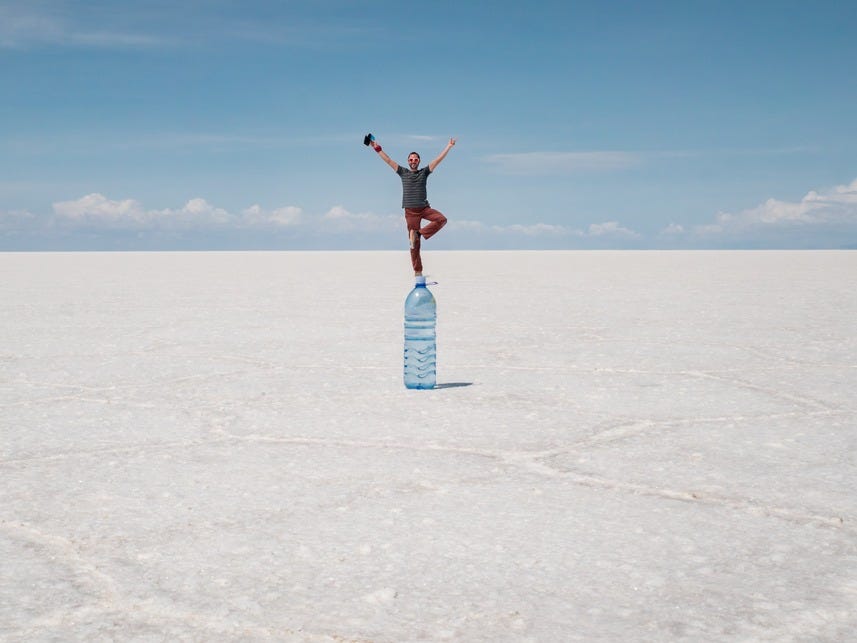 Everyone loves an optical illusion (even if they leave us completely stumped), and they’re all around us in the natural world.

From an underwater waterfall in the Indian Ocean to a surrealist scene in Namibia, Insider rounded up 18 naturally occurring illusions and optical phenomena that will make you double-take.

Take a closer look below and find out how these illusions are created.

This “underwater waterfall” is not what it seems. 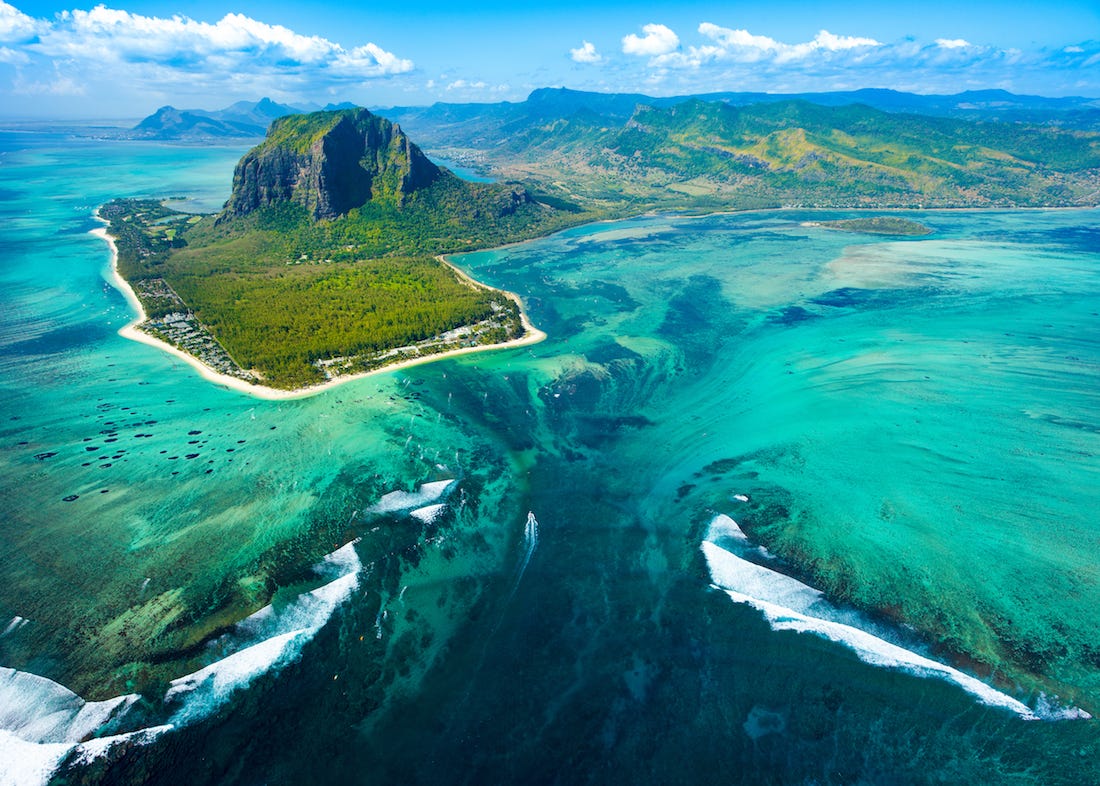 Myroslava Bozhko/ShutterstockThere’s a simple geographical explanation for this phenomenon.

Along the shoreline of Mauritius, there appears to be a flowing river underneath the turquoise water of the Indian Ocean. While underwater waterfalls do exist, this isn’t one of them. In this case, what looks like water is actually sand getting pushed off an underwater shelf called the Mascarene Plateau. 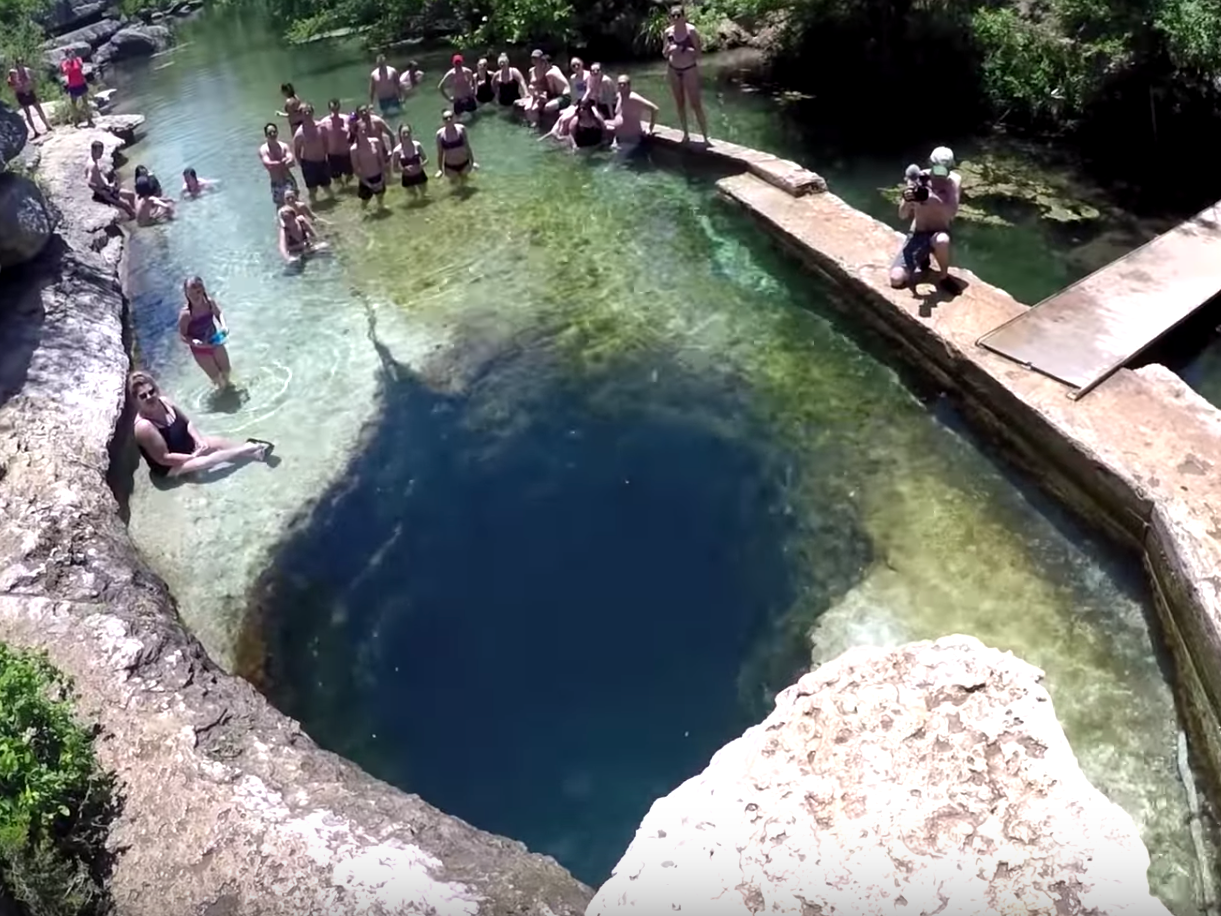 Jacob’s Well in Austin, Texas, is known for terrifying people who jump into this giant watering hole. While it’s 25 feet deep, an illusion makes it look like the well is thousands of feet deep. With a trick of the light and crystal clear water, it seems like you’re jumping thousands of feet into the Earth.

Yosemite’s Horsetail Fall looks like it’s on fire at a certain time of the year. 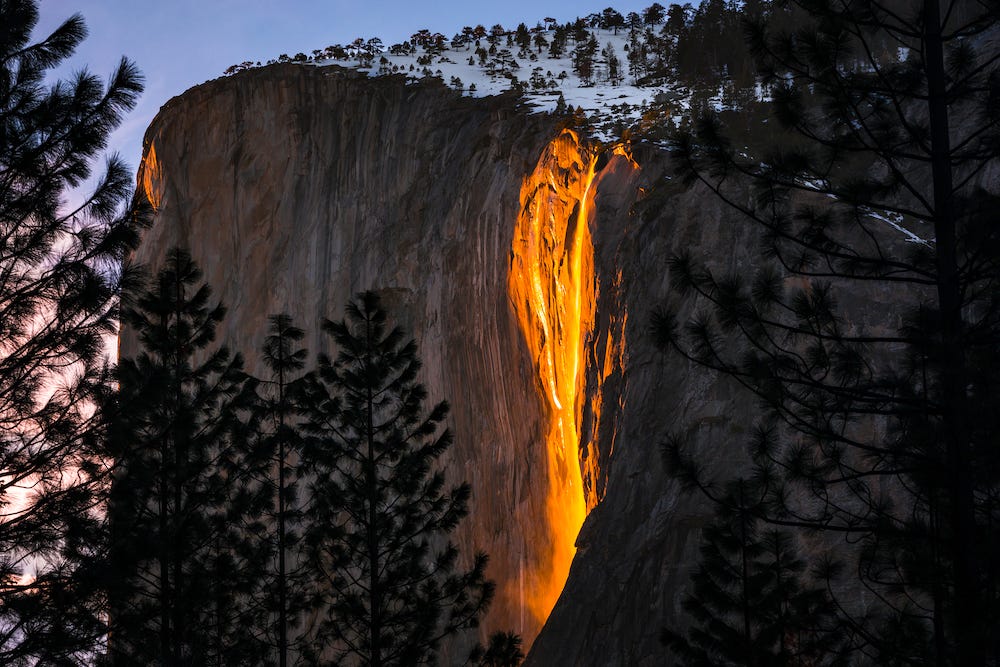 Dan Dunn/ShutterstockThat’s just water, not a flowing stream of lava.

Every year, around the second week of February, the setting sun hits Horsetail Fall in Yosemite National Park at a particular angle, illuminating the top of the waterfall. If the fall is flowing and the weather conditions are just right, the illuminated water glows bright orange and red, as if it’s on fire.

This giant shadowy figure is a naturally occurring optical phenomenon. 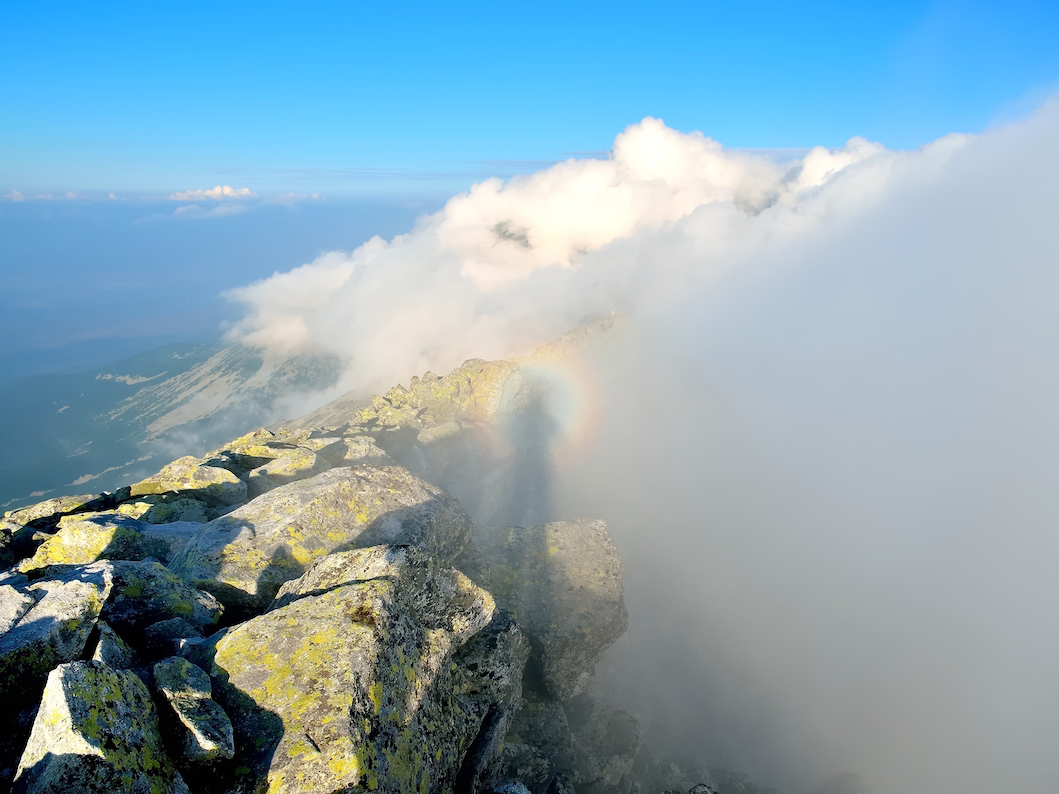 MagMac83/ShutterstockThis photo was taken in the High Tatra Mountains in Slovakia.

Known as a Brocken Spectre, this phenomena occurs when an observer’s shadow is cast onto the surface of clouds or thick mist. The head of the magnified figure is often surrounded by rainbow-coloured rings – another optical phenomenon known as a glory, which is created when sunlight hits tiny water droplets suspended in the atmosphere and is scattered back toward the viewer.

This salt flat in Bolivia is perfect for creating optical illusions. 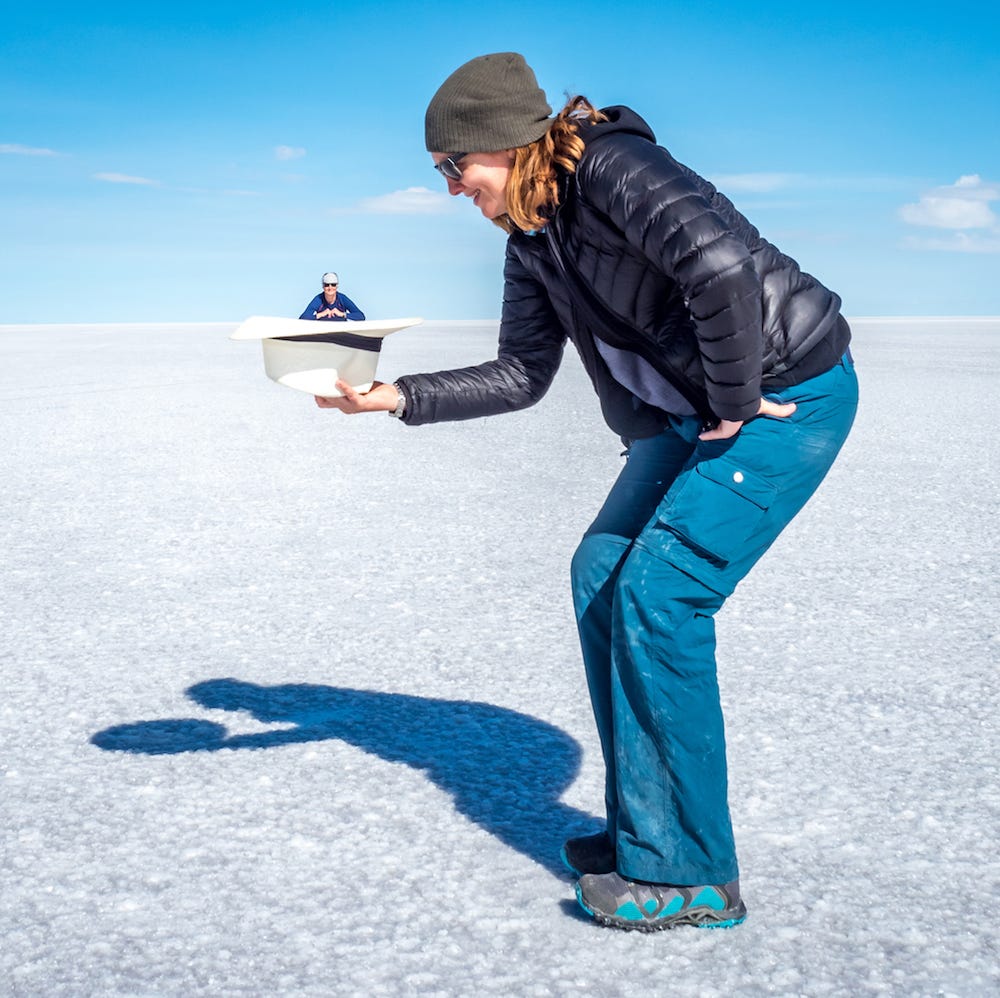 Bolivia’s Salar de Uyuni, the world’s largest salt flat, transforms into a giant reflective surface when it’s covered in a thin layer of water, either from rain or nearby overflowing lakes.

Stretching on for miles, completely level, the salt flat also appears to have an endless horizon, allowing photographers to create illusions by playing around with depth and perspective.

While this sky may look like ocean waves, it’s actually a special kind of cloud. 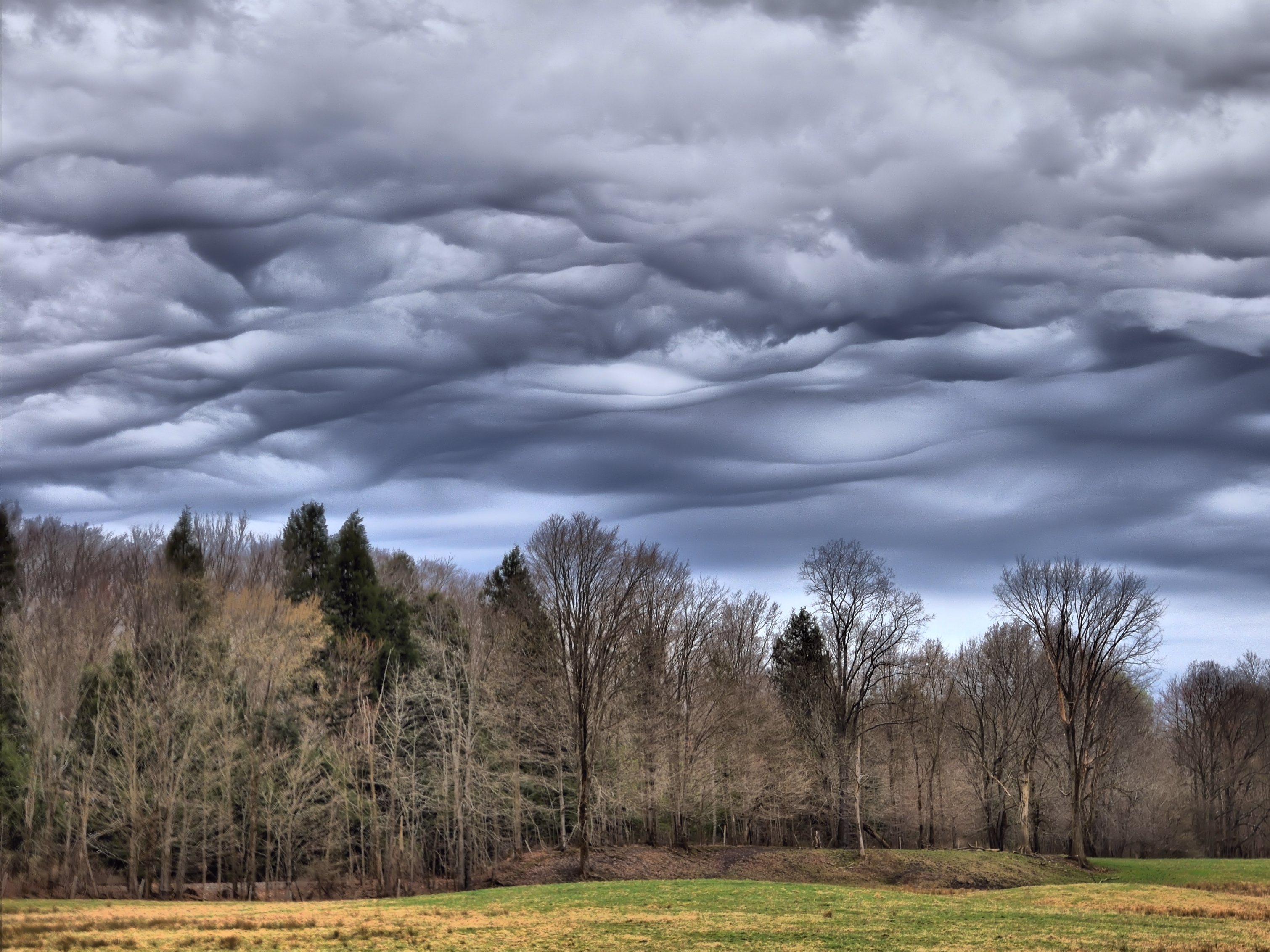 Commonly referred to as agitated or turbulent clouds, undulatus asperatus clouds are fairly new to meteorology. They are typically formed when rising air forms create a widespread cloud cover. This paired with wind and turbulence makes the cloud look like its undulating, mimicking ocean waves.

Meanwhile, these are clouds, not UFOs. 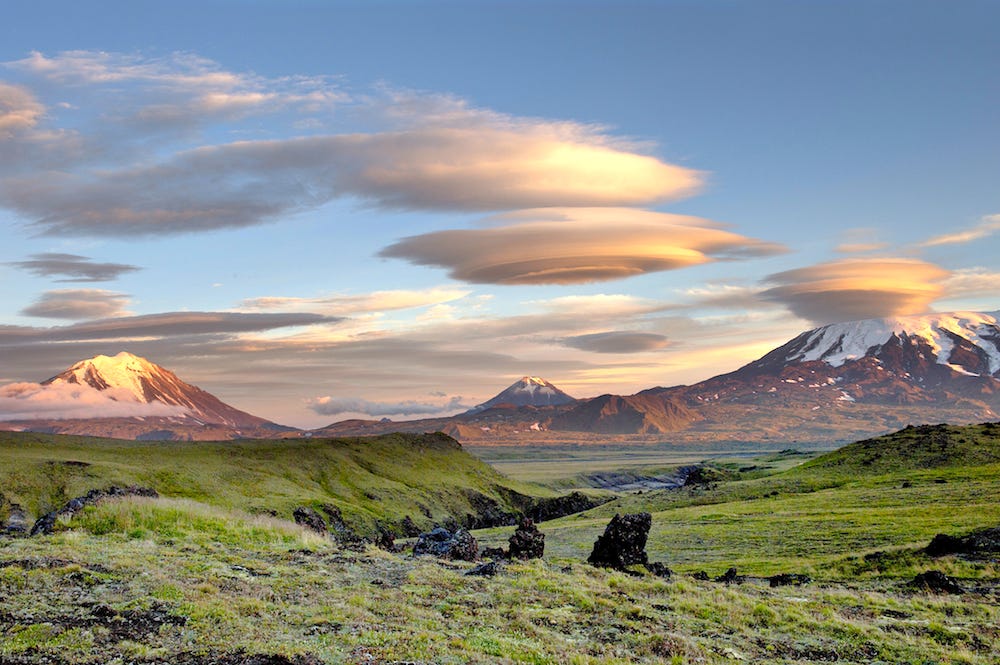 Michael Dorogovich/ShutterstockA photo of the Plosky and Tolbachik volcanoes on the Kamchatka Peninsula in Russia.

Known for their saucer-like appearance, lenticular clouds are stationary clouds that usually form on the downwind side of a mountain range, given that the temperature is low enough. Under the right conditions, moisture in the air condenses to form these massive, striking shapes in the sky.

Dracula orchids look like a face hidden in nature. At first glance, this flower appears to be a face, with eyes, a nose, a mouth, and even hair. To some, the flower looks like a monkey face. The bizarre-looking flower is actually called a Dracula orchid, and the “eyes” are just short petals.

The plains of Colorado sometimes look 3D from an aeroplane. 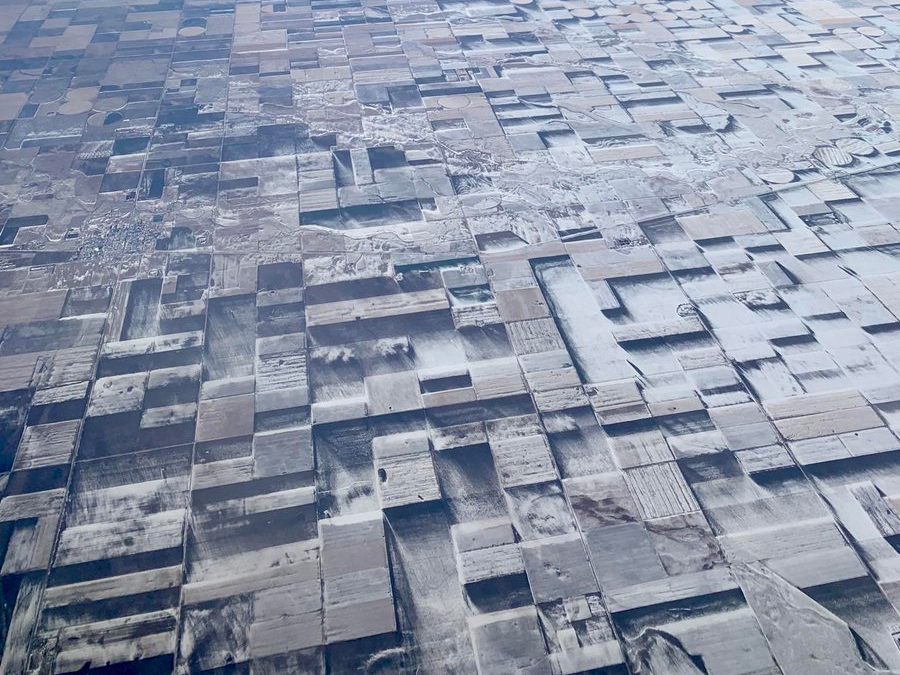 When a man was flying over the plains of Colorado, he noticed they appeared 3D – almost as if they were an elaborate urban city. But, the Colorado Climate Centre said it most likely was caused by the way snow fell in that area.

“Overall, I am figuring that the culprit is mainly due to the wind as the snow fell – coupled with farming practices such as fallowing some sections while growing crops in others – therefore intensifying the places where the sideways-blowing snowfall was blocked from the crops,” Noah Newman from the Colorado Climate Centre told The Weather Channel.

This isn’t a lens flare from a camera. 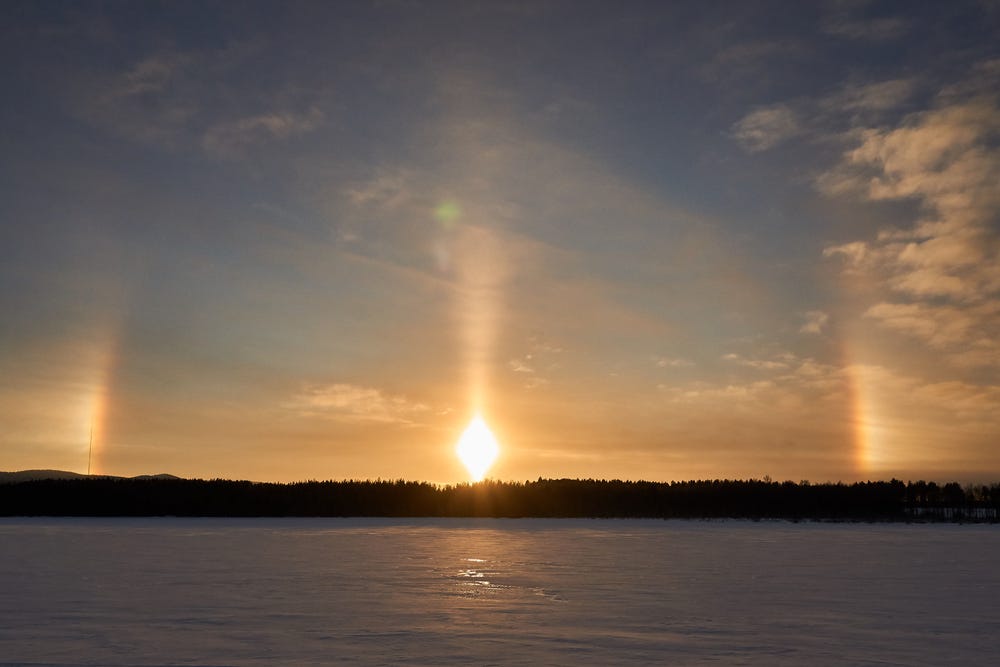 Gen_Shtab/ShutterstockYou can see this optical phenomenon in real life.

Sundogs, or parahelia, are created when sunlight is refracted by ice crystals drifting in the air. The result is one or more patches of bright light located around the sun.

At sea, objects in the distance may appear to be floating above the horizon. 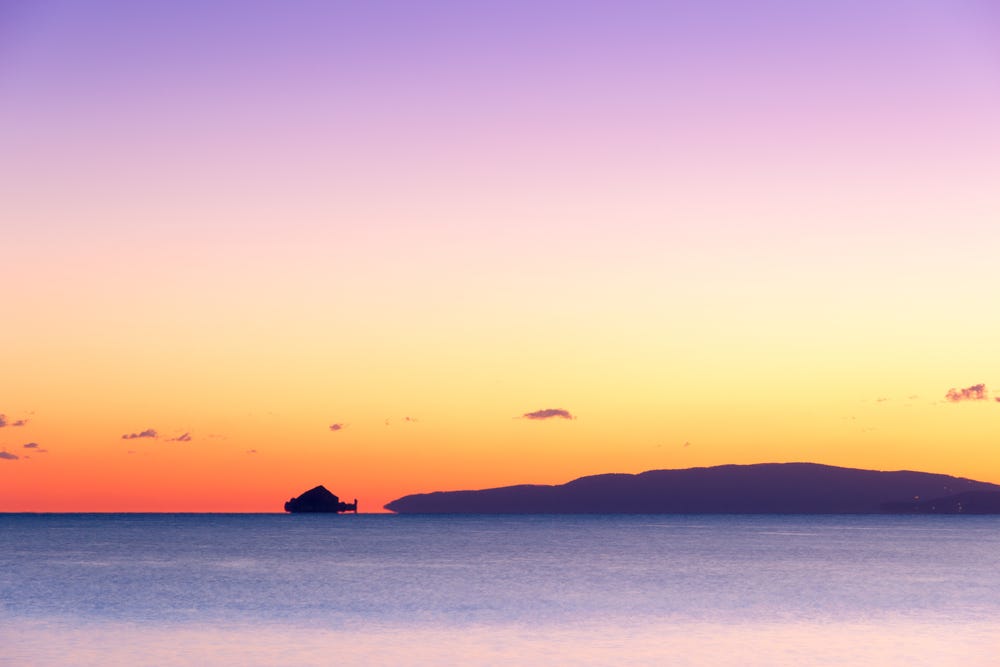 Paolo Querci/ShutterstockThis eerie phenomenon is known as a Fata Morgana.

A Fata Morgana is a complex, rapidly changing form of a superior mirage, an optical phenomenon that is created when light bends as it passes through a layer of air that is warmer than the layer below it.

Made up of several inverted and upright images stacked on top of each other, Fata Morganas appear as warped, often unrecognizable, objects or shapes that seem to float above the horizon.

The surface of an underwater volcano appears to be a mirror into another world. Schmidt Ocean/ YouTubeThe underbelly of the Big Pagoda looks like a mirror.

When scientists explored an underwater volcano, named the Big Pagoda, 6,500 feet under the Pacific Ocean, they found an awe-inspiring optical illusion.

The Big Pagoda was formed when extremely hot chemicals burst through the ocean floor and ran through the icy cold waters of the Pacific. The result is giant structures that seem to be upside-down volcanoes, but they actually help life grow at the bottom of the deep ocean.

While the structures themselves are otherworldly, it’s the surface that really attracted scientist because it looked like a giant mirror with water simmering against it.

Turns out, the mirrored illusion is actually a result of the cold water and hot chemicals mixing together and refracting light at the bottom of the sea.

This German bridge creates a perfect circle when reflected in the river below. 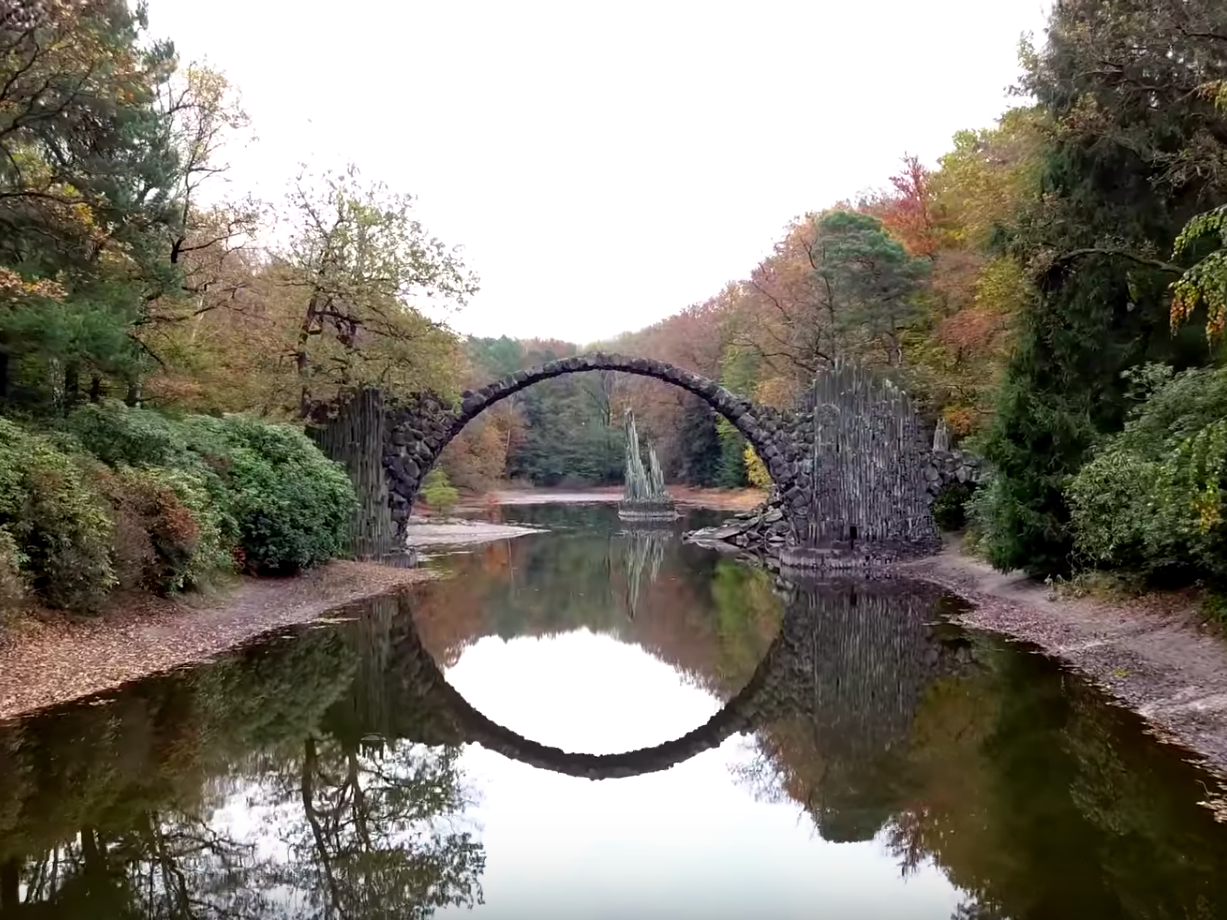 Rakotzbrücke bridge in Kromlau, Germany, was built in 1860 and has earned the name “devil’s bridge” among locals, as such bridges were so dangerous or miraculous they were said to be built by Satan. It was built purposefully as half a circle so that when the waters are still and the light is just right, it will form a perfect circle with its reflection.

This may look like a surrealist painting, but it’s actually a photo of Deadvlei in Namibia. 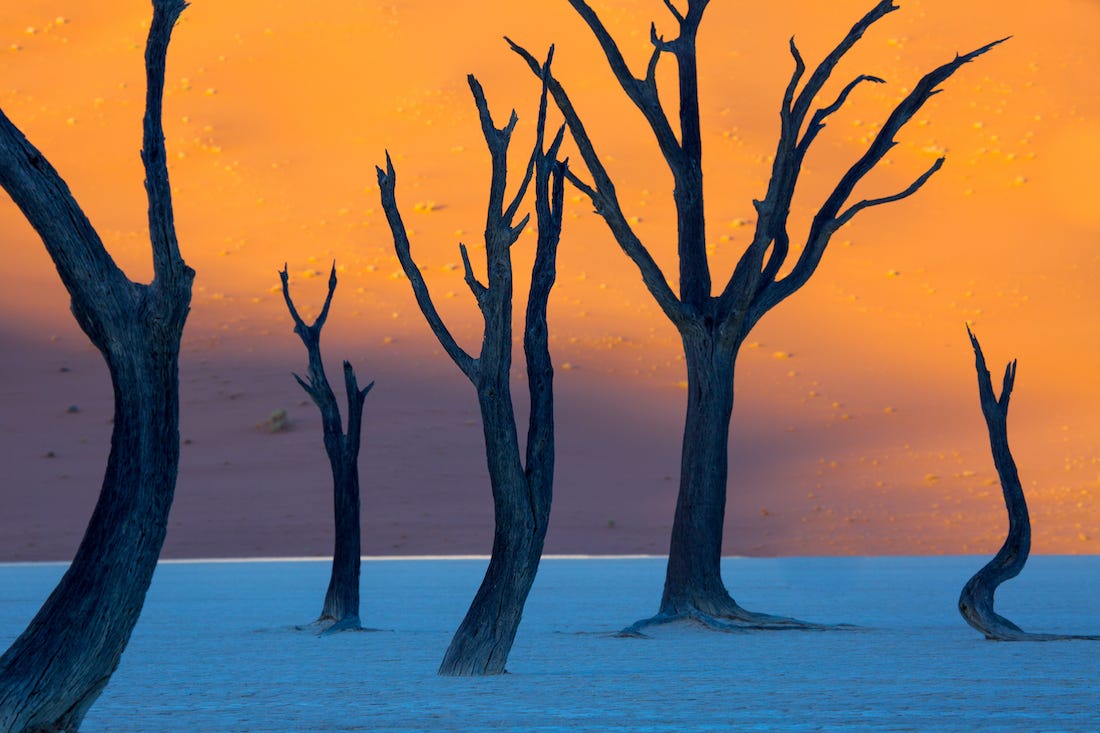 Located inside Namib-Naukluft National Park, Deadvlei is a claypan dotted with many long-dead camel thorn trees, which have not yet decayed due to the area’s dry climate.

The barren landscape, once flooded with water from the nearby Tsauchab River, is now a hot spot for photographers – many of whom have captured the contrast between the claypan’s bleached white floor and sun-scorched trees.

Pictures like the one above are typically taken from a very low angle, so that the sand dunes in the distance, tinted orange by the sun, look like a painted backdrop.

The undulating patterns in this rock formation throw off your depth perception. 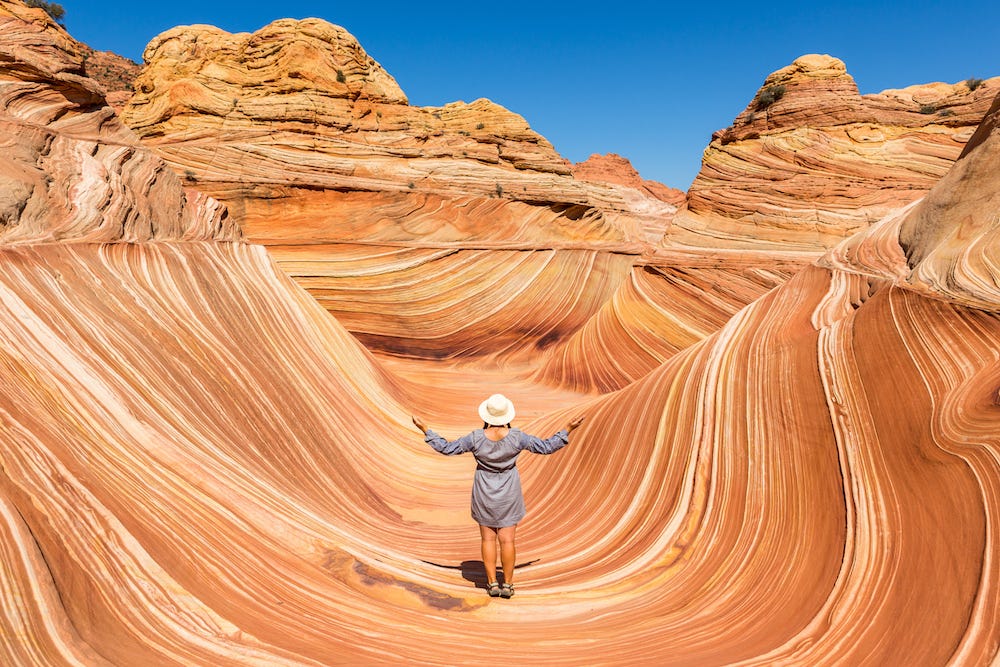 Vyshnivskyy/ShutterstockIt’s a popular spot for hikers and photographers.

This unique rock formation is known as The Wave. It’s located in Arizona, in the Coyote Buttes North area in the Paria Canyon-Vermilion Cliffs Wilderness. To see this stunning sight in person, however, you’ll need to enter a lottery system to get a permit four months in advance.

It’s easy to mistake simple mirages for bodies of water in the desert. 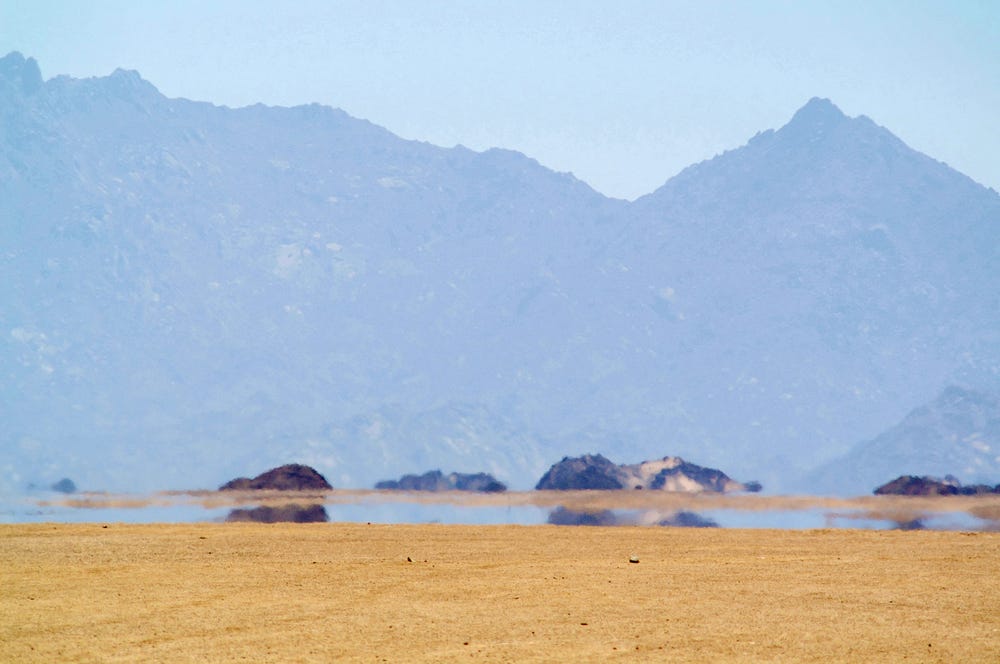 loskutnikov/ShutterstockThat’s not a lake in the distance.

Compared to Fata Morganas, inferior mirages are created when air near the ocean or earth’s surface is much warmer than the air above it. Light passing through these layers of air bends, producing an inverted, displaced mirage of an object (for example, a distant mountain range or the blue sky) that appears below the object itself. 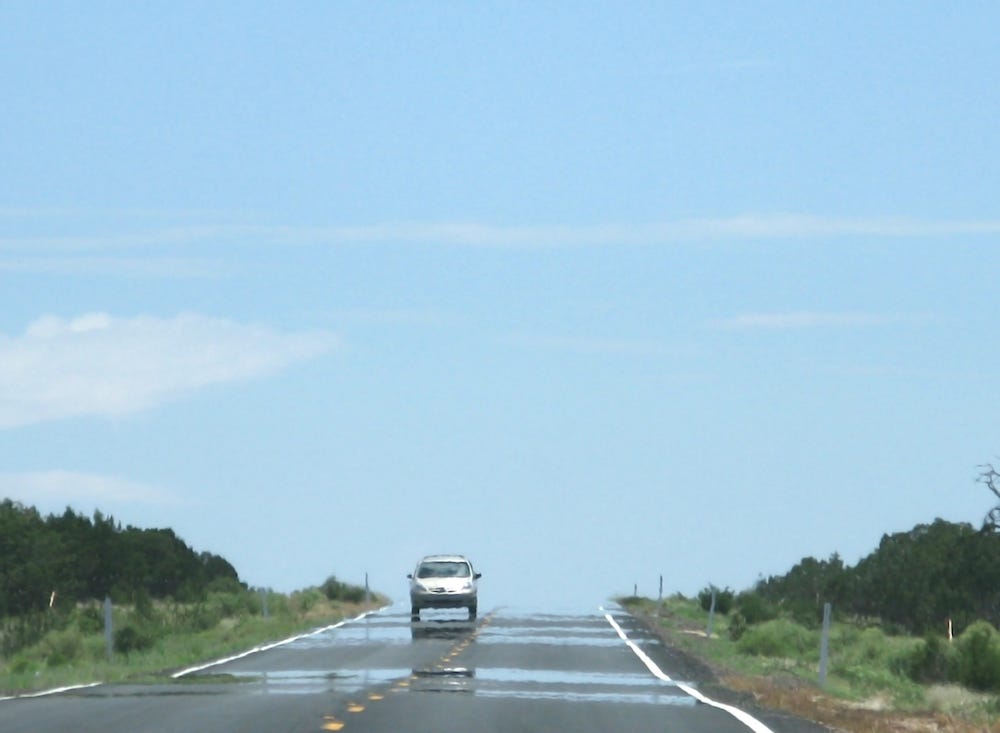 Artesia Wells/ShutterstockIt’s all an illusion.

This phenomenon is another example of an inferior mirage. Like sand in the desert, roads hold onto heat and warm up the air directly above it. Your brain then mistakenly perceives an inferior mirage of the sky as water on the ground reflecting light.

This moth has wings that look exactly like a snake’s head. 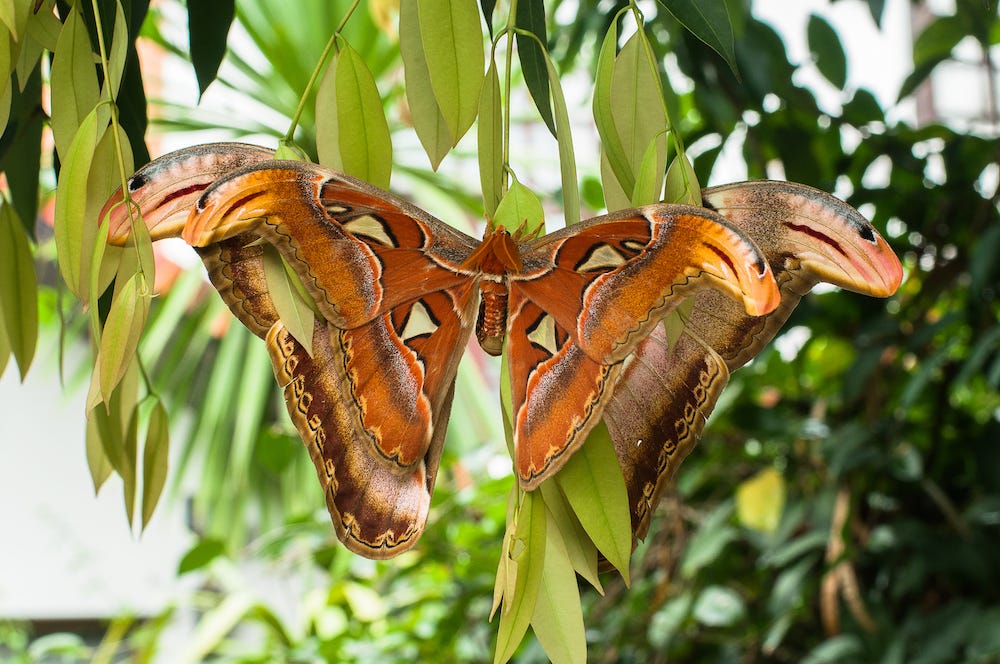 When threatened, the atlas moth drops to the ground and flaps its wings. The tips of the insect’s wings look incredibly similar to a snake’s head, which allows the moth to scare off predators.