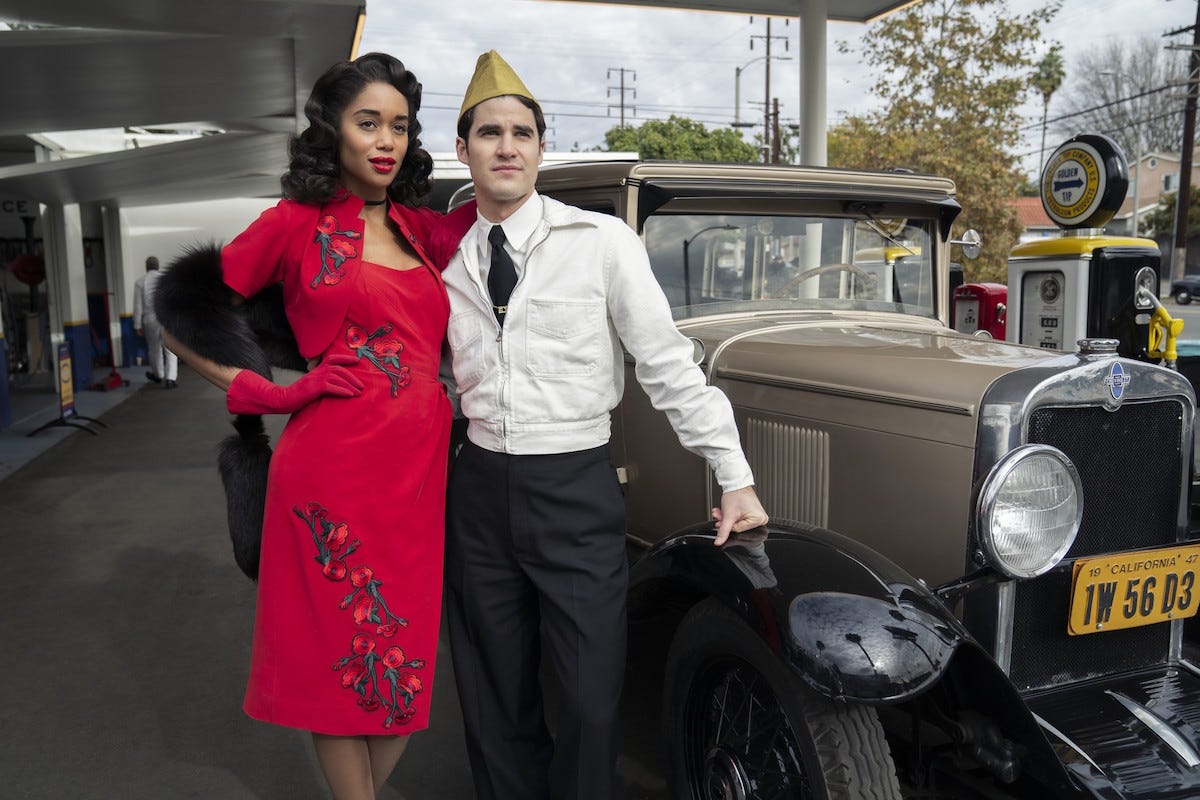 NetflixLaura Harrier and ‘Glee’ star Darren Criss as Camille and Raymond in ‘Hollywood.’

It’s hard not to be captivated by the 1940s glam of Netflix show “Hollywood,” especially when taking a look into the secret lives of the rich and powerful Tinseltown elite.

After a series of successes, fans know what to expect from a Ryan Murphy show. From “Glee” and “American Horror Story” to “The Politician” and “Pose,” a Murphy production has to be bright, loud, campy, sexy, and even a bit scandalous.

And since “Hollywood” is all about a group of young talents willing to do anything to make it in the big city, the raunchiness is arguably the biggest appeal of the show. Case in point: one of the main locations is a gas station which acts as a front for sex work.

To tie up the requirements for a Netflix hit, the show’s star pedigree is more than its characters could even dream of. Broadway legend Patti LuPone, Queen Latifah, “Glee” star Darren Criss, and “Big Bang Theory”‘s Jim Parsons join Murphy cast regulars David Corenswet and Dylan McDermott alongside the huge ensemble performers.

Corenswet plays Jack Castello, the main character who just moved to Los Angeles to become a movie star after serving in the war. Jack is struggling to make ends meet and provide for his pregnant wife with just his stints as a background extra, so he accepts a position at the gas station as a pump boy/escort, and recruits Archie Coleman (Jeremy Pope), a gay and black aspiring writer, to help out with the “guy stuff” he himself is not too keen on.

When Jack catches the attention of one of a regular customer, a studio head’s wife and former silent movie star Avis Amberg (LuPone), he is soon under contract as an actor and is given a leading role in the studio’s newest project, “Peg,” a movie about the life and death of young actress Peg Entwistle, who in real life killed herself by jumping off the Hollywoodland sign in 1932.

The film’s director Raymond Ainsley (Criss), however, decides to cast his own girlfriend, Camille Washington (Laura Harrier), in the part of Peg. To ease the studio’s concerns about having a black woman as the lead playing a white British girl, they rebrand the film “Meg.”

This sounds like the perfect set-up for a ruthless look into the scandalous sexism, homophobia, corruption, and coercion that governed the entertainment industry and shaped the history of cinema and America both.

Instead, though, the show heads into a fantasy world that goes beyond what could be called an alternate history and instead becomes a counterfactual one.

The story the show tells is dishonest, delusional, and even dangerous 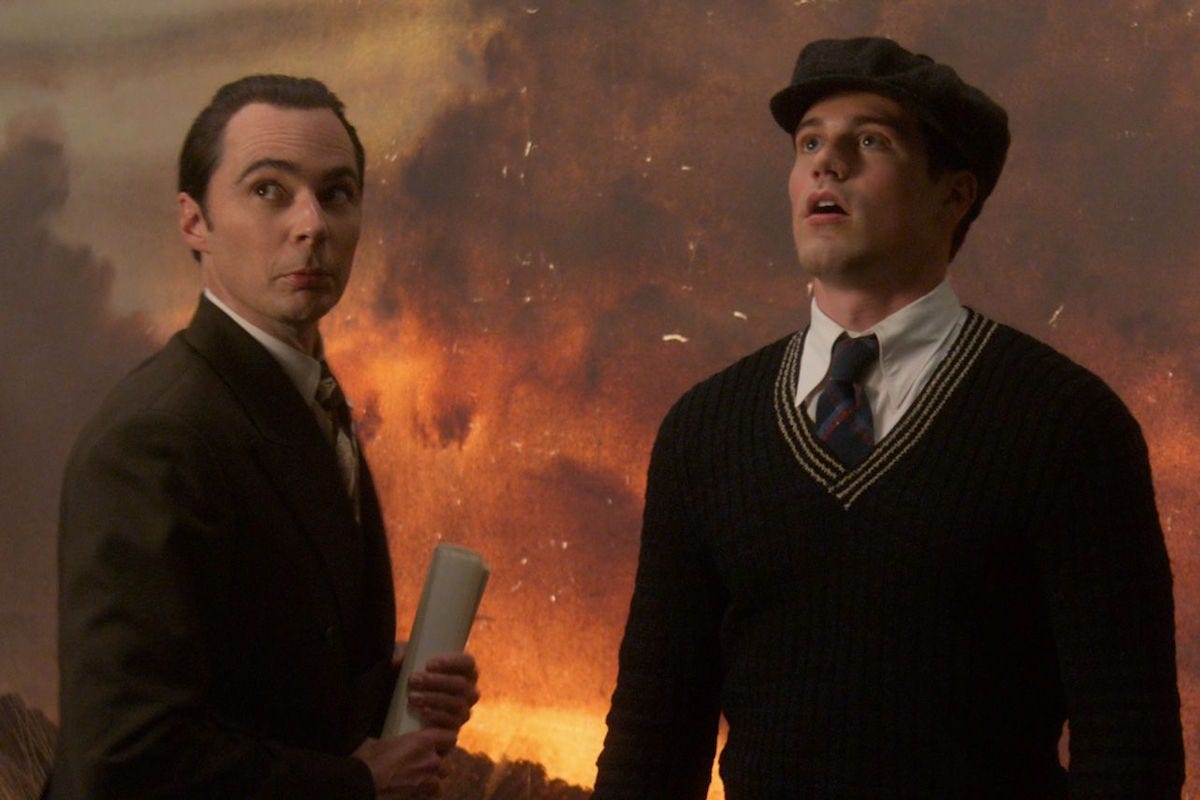 “Hollywood” seems to suggest that all it would have taken for racism to vanish off the face of the film industry – and America – is a few daring producers and one smash hit. Not even white supremacists and the KKK could fight the power of a successful box office.

The newsreel introducing “Meg” decries: “Racial protests around the country simply melted away!”

If only it could be this simple.

While Murphy’s show is trying to celebrate the achievements of women, gay people, and people of colour in Hollywood, what it actually manages to do is tell a dishonest, delusional, and even dangerous story.

In Murphy’s world, with a brush of a pen on a script, the sexism and homophobia that still reside in Hollywood vanish completely.

The show completely erased how in reality, Rock Hudson – played in the show by Jake Picking – had to keep his homosexuality secret throughout his career until his eventual death to AIDS.

In the world of “Hollywood,” after only one screen appearance as a background character in “Meg,” Rock walks the red carpet at the Oscars hand-in-hand with Archie, his black and gay boyfriend.

As Vulture reported, real-life Hudson only had a number of short-term boyfriends according to his biographer, and his agent, Henry Willson (played by Jim Parsons in the show), pushed for him to present as straight and keep his personal life out of the limelight and headlines.

Vulture also reported that in 1955, after tabloid magazine Confidential threatened to publish an exposé about Hudson’s secret homosexuality, Hudon got married to Phyllis Gates, Willson’s secretary, who later admitted to being forced into the marriage by her boss without knowing Hudson was gay.

The marriage only lasted three years, and Hudon’s sexuality remained a secret until shortly before his death in 1985, when his AIDS diagnosis was revealed.

‘Hollywood’ treats misogyny in the industry like a short-term problem 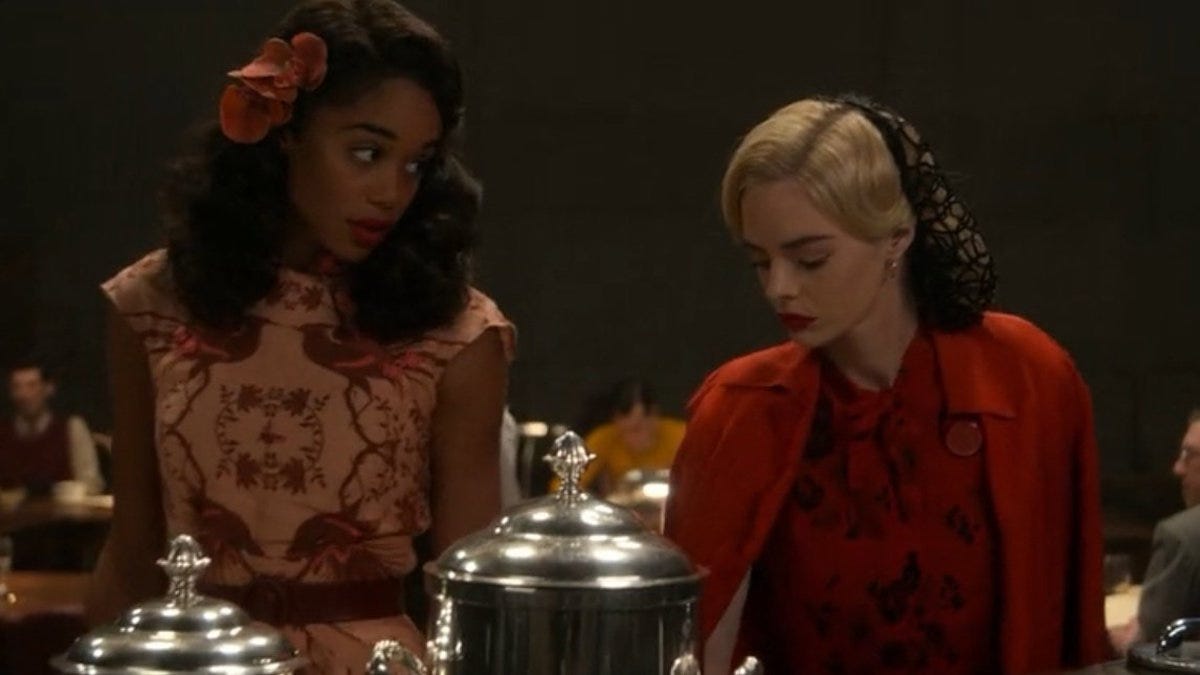 “Hollywood” also seems to tell us that the rampant sexism that brought Peg Entwistle to her tragic death wasn’t that bad after all, and that she could have lived if only she had a little bit of hope in herself.

In reality, Peg didn’t have a supportive boyfriend who chased after her and begged her to climb down from the 50 ft. tall sign. Instead, she had an alcoholic and abusive ex-husband, according to the biography “Peg Entwistle and the Hollywood Sign Suicide” cited by Vulture, whom she had divorced, but the news of his remarriage a few years later broke her.

When her dream of being a star, the dream she had staked her whole life on, shattered in front of her eyes when her first and only Hollywood role got cut to only four minutes of screen time, it was seemingly more than enough to make her take that step and fall to her death.

In Netflix’s “Hollywood,” though, this ending just doesn’t work for the picture the fictional filmmakers are trying to create. Painting Peg, or “Meg,” as a symbol of all those who were worn down by Hollywood would be too sad. So she doesn’t jump, and it becomes a far less accurate story of hard work and perseverance during hard times.

Anna May Wong was wronged, forgotten, and never got her second chance 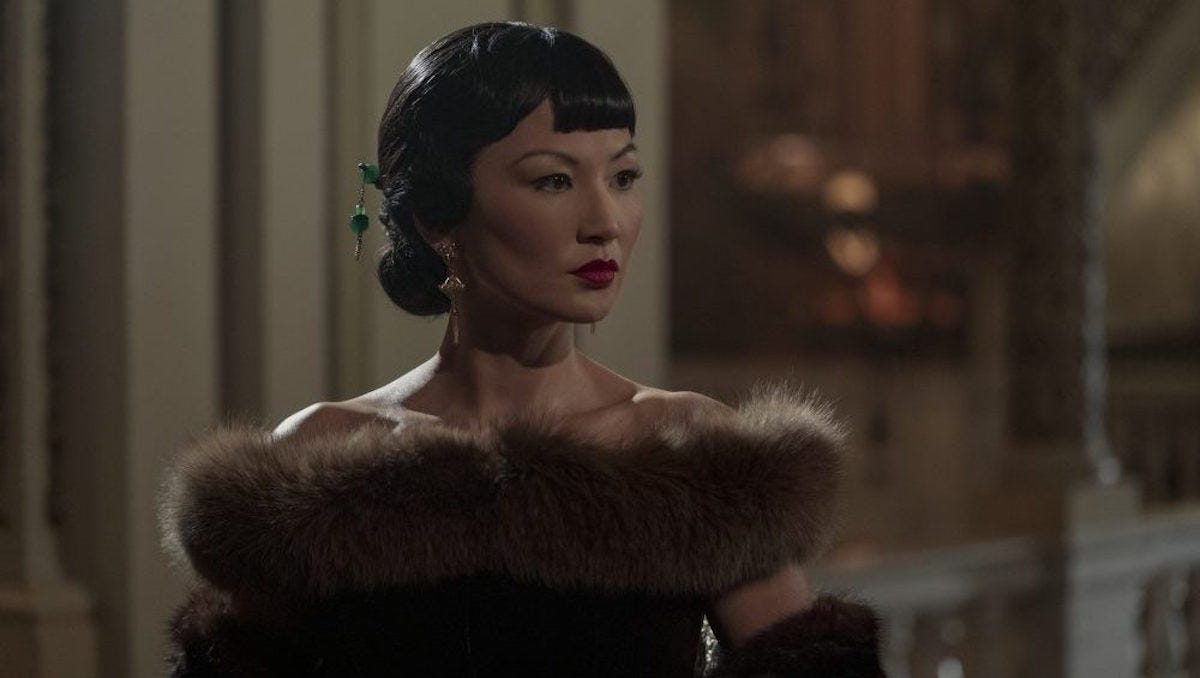 NetflixAnna May Wong (played by Michelle Krusiec) is given a second chance at success in the Netflix show.

It’s nice to see Anna May Wong win an Oscar in “Hollywood,” but that is the closest the real actress ever got to one.

During her lifetime she was not an acclaimed actress who had a “nomination long overdue,” as the show suggests. She was known for playing dragon ladies up until she faced the possibility of starring in “The Good Earth,” a film about a husband and wife from a remote Chinese village – the perfect role for Anna May Wong to shine in.

Instead, she lost the role to German actress Luise Rainer – who later went on to win an Oscar for her performance – after Paul Muni, a white actor, was cast as the lead male, as no interracial relationships were allowed on screen at the time.

Wong felt wronged by this choice and rejected the offer to play yet another exotic temptress in the same movie. From that point on she only starred in B-movies where Asian characters were portrayed in a positive light.

In the showrunners’ eyes, ‘Meg’ would have been an award-sweeping success 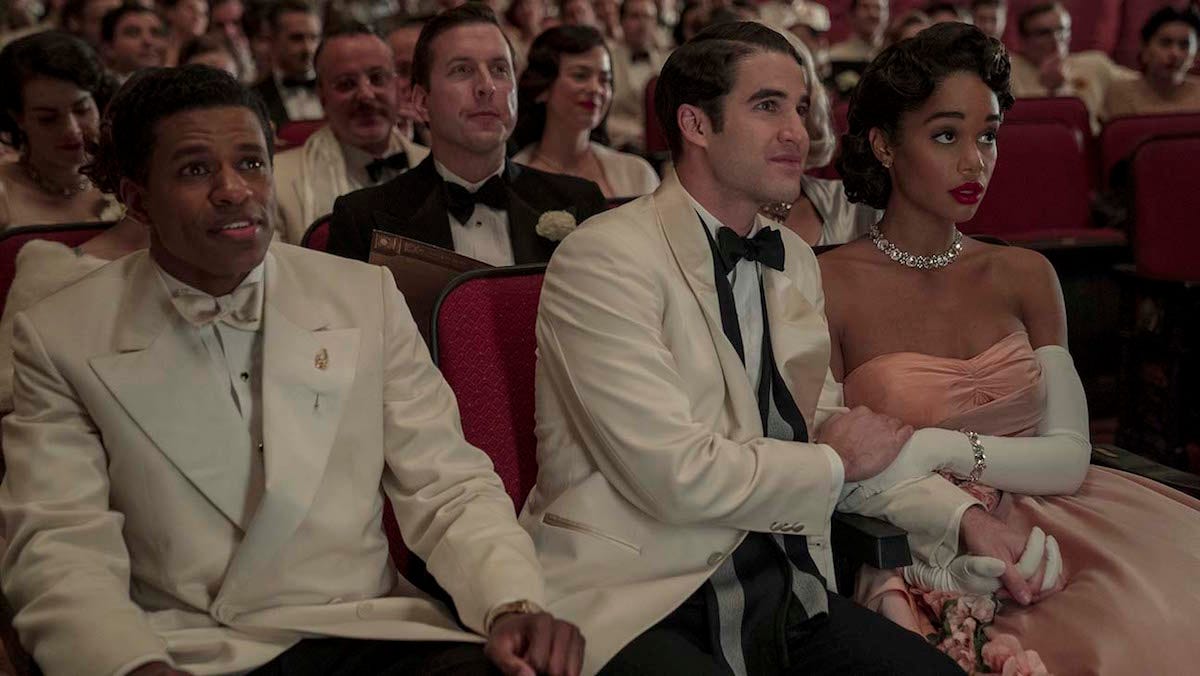 NetflixArchie (Jeremy Pope), Raymond (Darren Criss) and Camille (Laura Harrier) sat in the first row at the Oscars, ready to sweep up their awards.

The last episode of the Netflix show – set during 1948’s Oscars ceremony – could have been the show’s apex, coming to a balanced conclusion that courage and hard work, while noble, aren’t always enough to win against a bigoted industry.

Instead, “Meg” is a landslide success, taking home all but one of the awards it was nominated for in a sickly self-congratulatory sequence.

When the film’s writer Archie (Pope) is called on stage to collect his award, he kisses boyfriend Rock in front of the entire theatre and thanks him in his speech, responding to the audience’s boos by saying he is just too happy to care. The thugs who earlier threatened Camille for being a black lead in a film were nowhere to be seen.

It is at this point that Hollywood truly becomes a Dreamland, a wish-fulfilling machine cleansed of any discrimination.

This fairytale attitude disrespects the memory of so many more people who were like Hudson, Wong, and Entwisle, suffering similar hardship at the hands of Hollywood.

The show doesn’t let their stories live, and instead only gives them a quick out to a happy ending, never acknowledging – not even in the end credits – what these actors really had to go through and the power Hollywood had over their lives.

The true winners didn’t arrive for many more decades 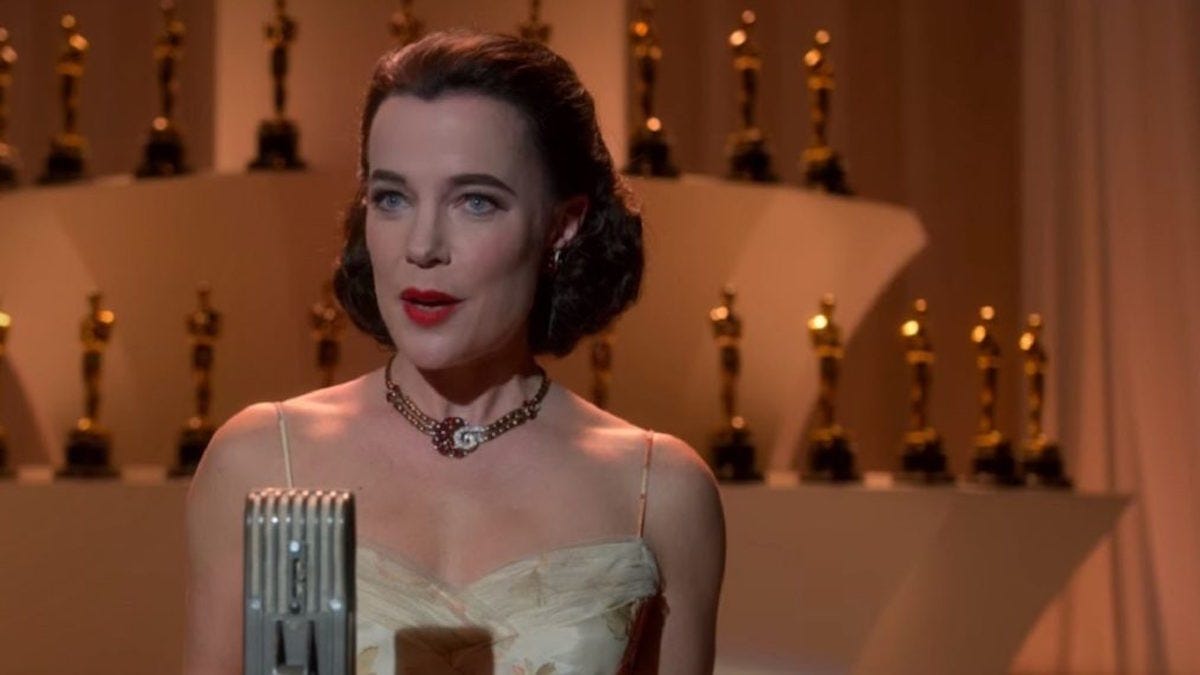 NetflixKatie McGuinness as Vivien Leigh presenting the Oscars in 1948.

“Hollywood” also disrespects the legacy of the brave people who had to fight for decades to set the same landmark achievements.

The world had to wait until 1963 for a black person (Sidney Poitier) to win an Oscar for a leading performance, and it wasn’t until 2001 that Halle Berry became the first black woman to do the same.

Further, it seems no out gay person won the award until the 80s, with Linda Hunt being the first publicly out LGBTQ+ acting nominee and winner at time of her win in 1983. Meanwhile, Rob Epstein and Richard Schmiechen’s 1984 “The Times of Harvey Milk” was the first gay-themed film by openly gay filmmakers to win an Academy Award.

Everything that was wrong (and still is, according to #MeToo and #OscarsSoWhite) with the industry is simply being willed away in this show as Hollywood climbs back on its moral high horse.

Ironically, in its alternate reality, “Hollywood” erases the true winner of the 1948’s best picture winner, “Gentleman’s Agreement,” which was a groundbreaking movie that famously tackled the rampant anti-semitism of the time head-on.

These moviemakers were trying to push for change, but not the kind of change the makers of “Hollywood” wanted to champion.

“To everybody listening, your story is important,” Archie says in his fictional Oscars speech. “Don’t go thinking otherwise, don’t get your story go untold. You are important. Your life has value. You go out and you live your life with your head held high and you tell your story ’cause I’m proof that there are folks out there who want to hear it.”

He was right. There are countless powerful stories worth telling from Hollywood – it’s just a shame Murphy wrote them out of the town’s history.

‘The Help’ is trending on Netflix, and it’s the worst type of ‘white saviour’ movie Americans could watch right now

Movies you can stream for free about social injustice, from ‘Ali’ to ‘Selma’

10 things to watch to educate yourself about systemic racism