The head of the Trump administration's Operation Warp Speed vaccine effort has had 'no contact' with Biden, and can't share confidential information with the President-elect 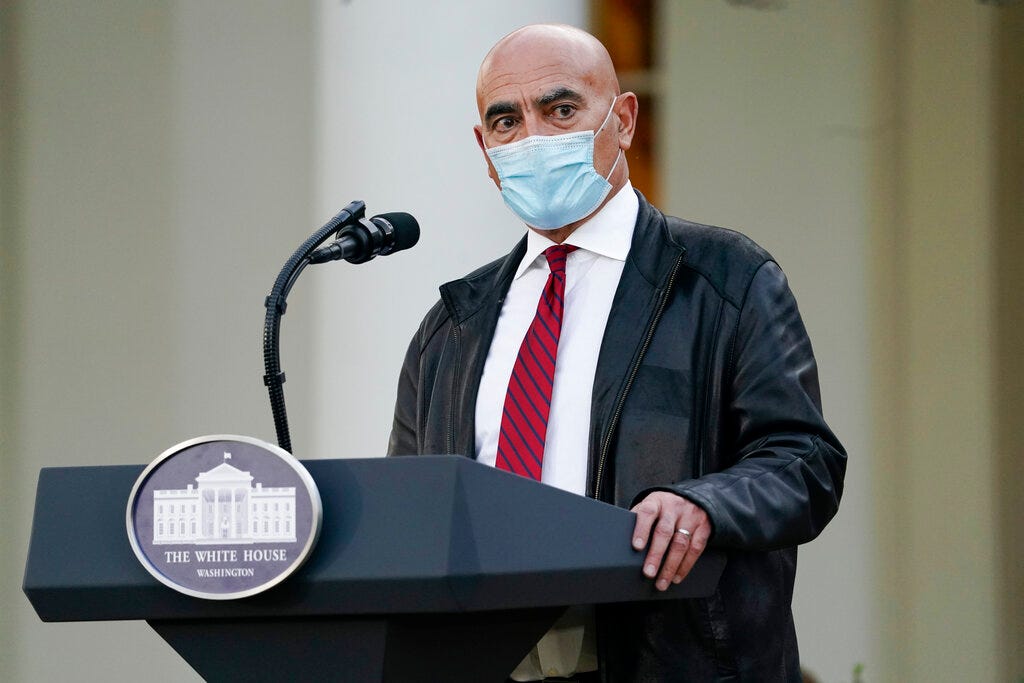 Moncef Slaoui, the chief scientific adviser to the Trump’s administration COVID-19 vaccine effort, Operation Warp Speed, has said he is not allowed to share any confidential information about the program with President-elect Joe Biden.

Slaoui, who was selected to lead the White House’s initiative to bankroll vaccine candidates, said in an interview with ABC on Sunday that he’d had “no contact” with the incoming administration.

On NBC’s Meet the Press on Sunday, he was asked whether he would be open to speaking to the Biden administration.

“I have been informed that I should not be saying anything that is confidential to anybody, including anybody that’s not a part of the administration, and I’ll act in accordance with what the legal requirements are.”

He said he’d be “happy” to share information that is already public with Biden’s team.

Operation Warp Speed hopes to help drug companies deliver 300 million coronavirus shots by January 2020. Since the top COVID-19 candidates in the vaccine race require two shots per person, that would mean vaccinating 150 million Americans, which is around 45% of the population.

He said he “can’t see” the transition from President Donald Trump to Biden disrupting vaccine distribution.

“I hope there is no disruption in any way,” Slaoui added in the NBC interview.

Slaoui said that he’s “highly supportive” of Operation Warp Speed and “if it means I work with the new administration, I’ll be happy to.”

“All the information that I make public of course I’ll make public to the new administration,” Slaoui said.

In another interview on Sunday, Slaoui said some Americans could “hopefully” receive the vaccine for COVID-19 as soon as December 11 or 12.

“Our plan is to be able to ship vaccines to the immunization sites within 24 hours from the approval, so I would expect maybe a day or two after approval,” Slaoui said on CNN’s “State of the Union.”

“On the 11 or 12 of December, hopefully, the first people will be immunized across the United States,” he said.

His comments come after Pfizer and BioNTech requested Friday that the US Food and Drug Administration review their coronavirus vaccine for emergency authorization.


Read more:
A Biden victory in 2020 would disrupt the race for a coronavirus vaccine. Insiders reveal the future of Operation Warp Speed minus Trump.

Pfizer and its German partner BioNTech, which said Wednesday their COVID-19 vaccine was 95% effective, are one of six vaccine candidates funded by Operation Warp Speed. Pfizer will receive $US1.95 billion from Warp Speed to manufacture and deliver 100 million doses.

Moderna, another drugmaker which claims its coronavirus vaccine was 94.5% effective, was granted $US955 million by Operation Warp Speed to advance its clinical trials and a further $US1.5 billion to manufacture and distribute 100 million vaccine doses.

The coronavirus has infected more than 12.3 million people and killed more than 256,587, according to the New York Times COVID-19 tracker.

The University of Oxford and AstraZeneca, one of the frontrunners in the race for a vaccine, said Monday their two-shot candidate was 70% effective on average in a 20,000-person late-stage trial.

Biden announced on November 9 the public-health experts making up his COVID-19 advisory board. In a statement, the President-elect said the board “will help shape my approach” to managing the coronavirus pandemic.