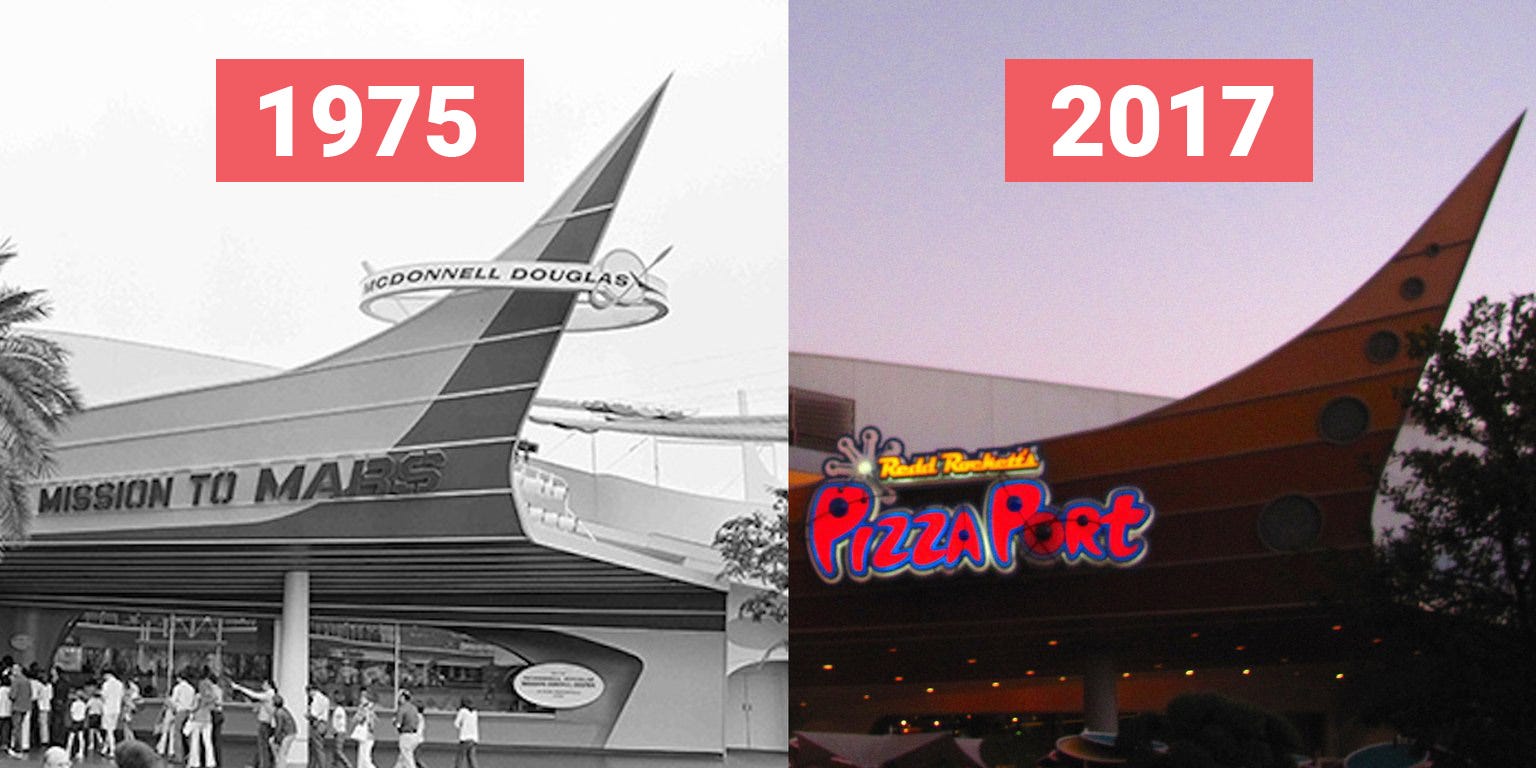 Disney/FlickrMission to Mars is now a restaurant in Disney’s Tomorrowland.

Over 60 years ago, Disneyland opened in Anaheim, California. In the decades since, Walt Disney’s original theme park vision has undergone changes both big and small. Rides, attractions, and entire swaths of land have sometimes been overhauled or torn down to make way for modern amusements.

But thanks to documentaries and numerous Disney bloggers, we can still look back at some of the most iconic rides that are now only a memory.

Keep reading for a look at nine extinct Disneyland attractions you probably never knew about.

The Flying Saucers ride was only open for five years. 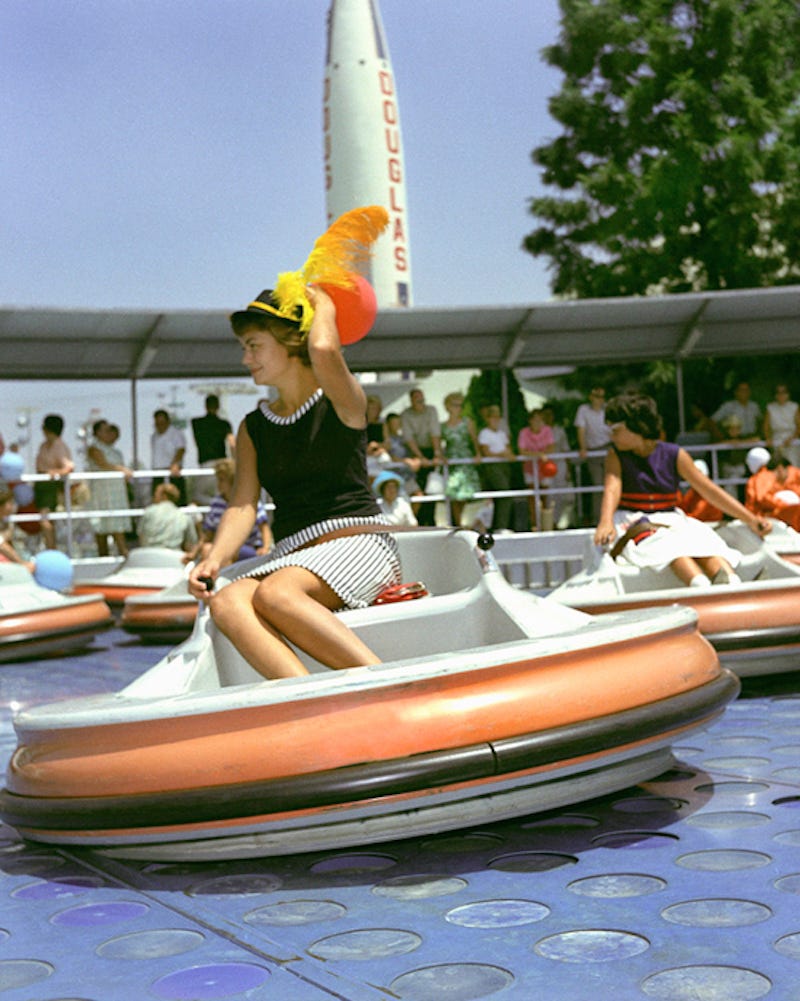 DisneyThe Flying Saucers were built in the spot where Space Mountain is now.

The Flying Saucers ride was basically like a giant air hockey board, but with bumper car “saucers.” Air from the circles on the ride’s floor would push up the saucers, creating a floating effect.

Thanks to the official Disney Parks blog, you can watch the Flying Saucers in action on the ride’s opening day in 1961.

The Rocket Jets ride was a Tomorrowland landmark from the ’60s through the late ’90s. 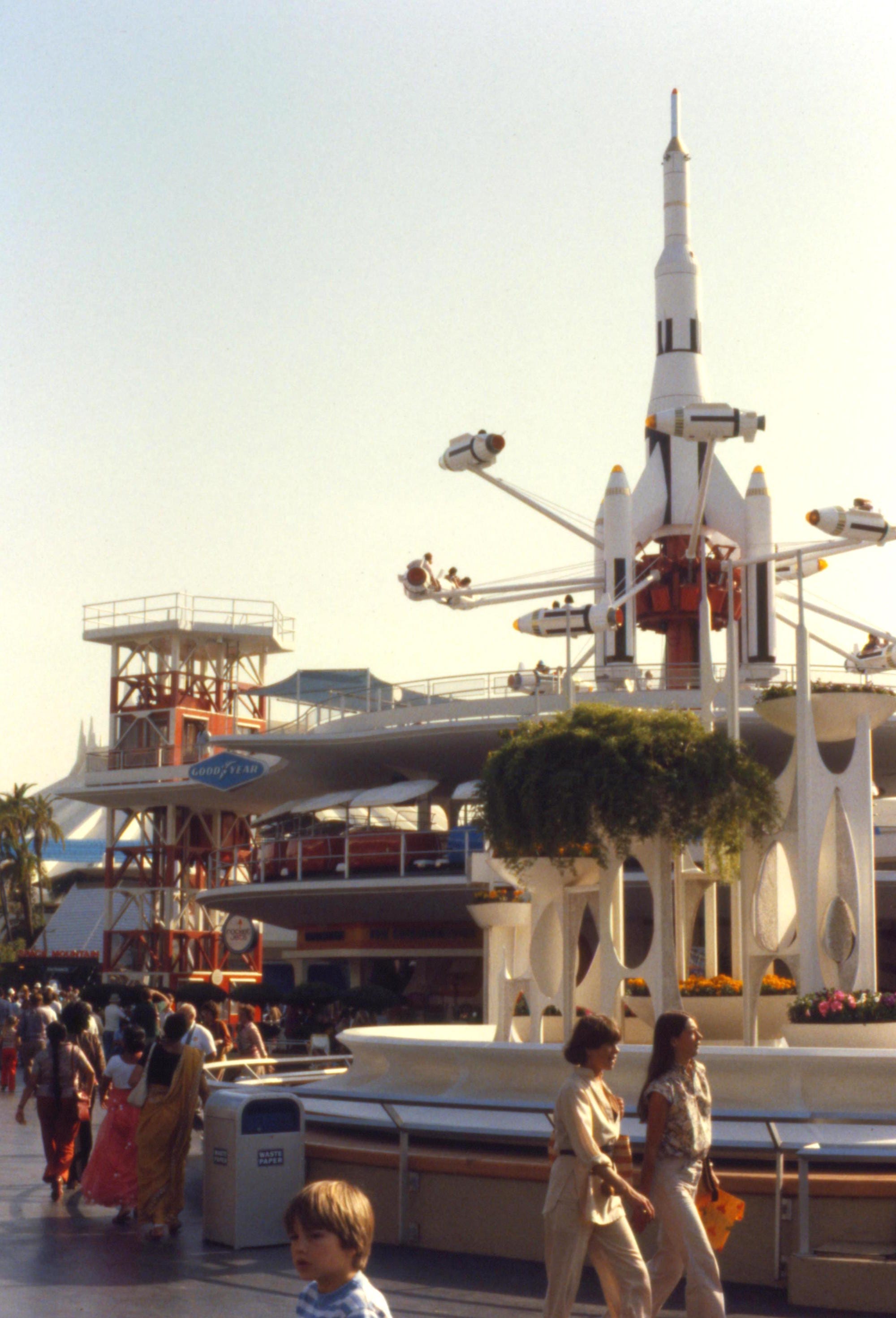 Rocket Jets was actually a replacement for a similar ride called Astro-Jets, but we’ve included it here because it had a much longer tenure. Rocket Jets was a spinning attraction similar to the well-known Dumbo ride.

After it closed in 1997, Disneyland built a new rotating rocket ride called the Astro Orbitor. But the replacement was too heavy to build in the exact same spot as the Rocket Jets, so it was moved to the entrance of Tomorrowland on the ground level.

The PeopleMover is one of Disneyland’s most-missed extinct attractions. 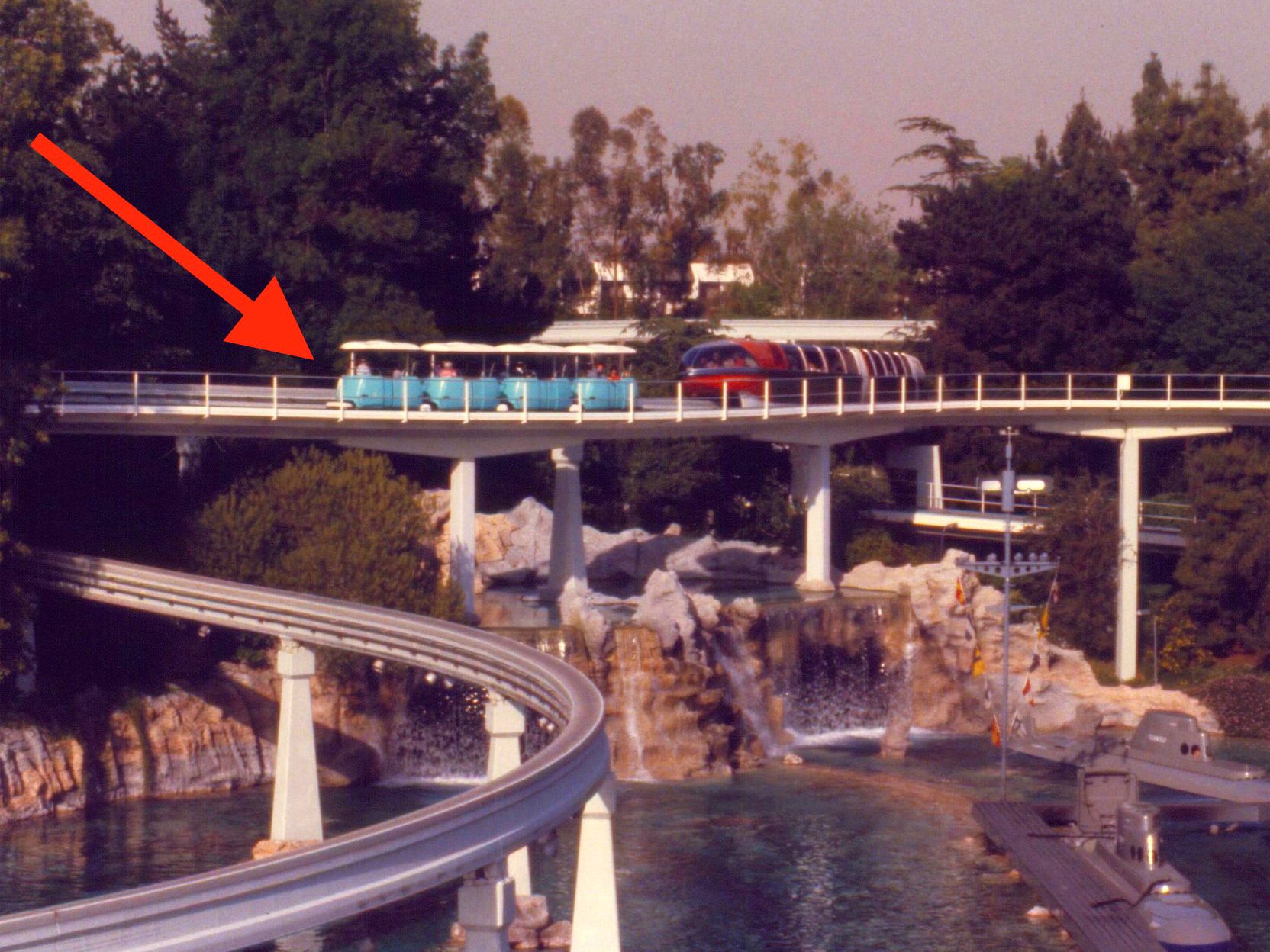 Many who visited Disneyland in its earlier years will remember the PeopleMover – a train ride that ran along an elevated track. First built in 1961, the ride was a great way to relax and enjoy a unique view of Tomorrowland. Though a version of this ride still exists in Disney World, the original California park version was retired in 1995.

For a full look at the ride’s history, watch David Oneal’s mini-documentary.

Here’s another look at the PeopleMover back in its Tomorrowland heyday. 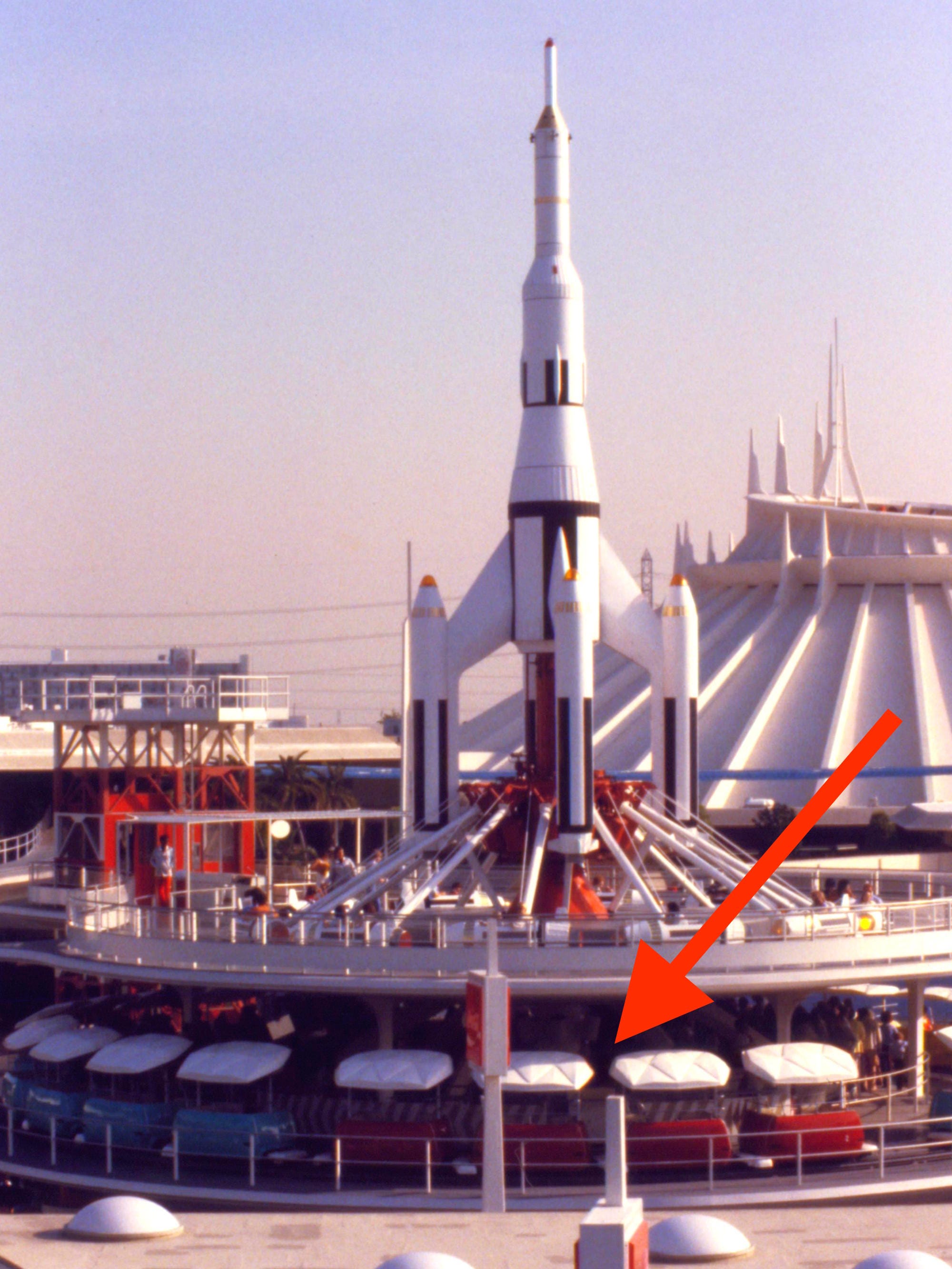 The boarding station for the PeopleMover was right below the Rocket Jets ride. 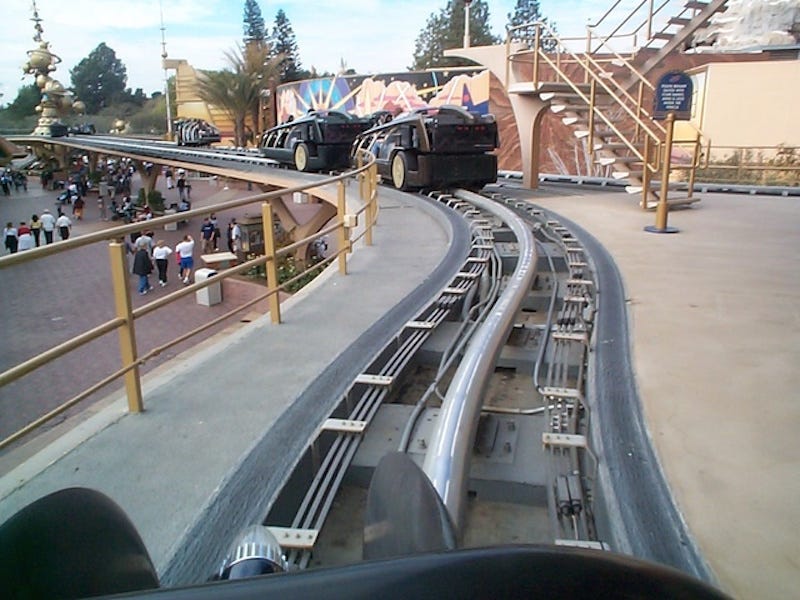 Not to be confused to the extinct ride we just looked at (Rocket Jets), the Rocket Rods ride was a high-speed thrill ride that used the old PeopleMover track to jet parkgoers around Tomorrowland. Think of it like a roller coaster but with no loops or major ups and downs. Rocket Rods was only open for two years, from 1998 to 2000.

Now the PeopleMover and Rocket Rods track sits unused above Tomorrowland, with no plans to install a new attraction in their place.

Similar to the PeopleMover, the Skyway was a memorable Disneyland ride that closed in the ’90s. 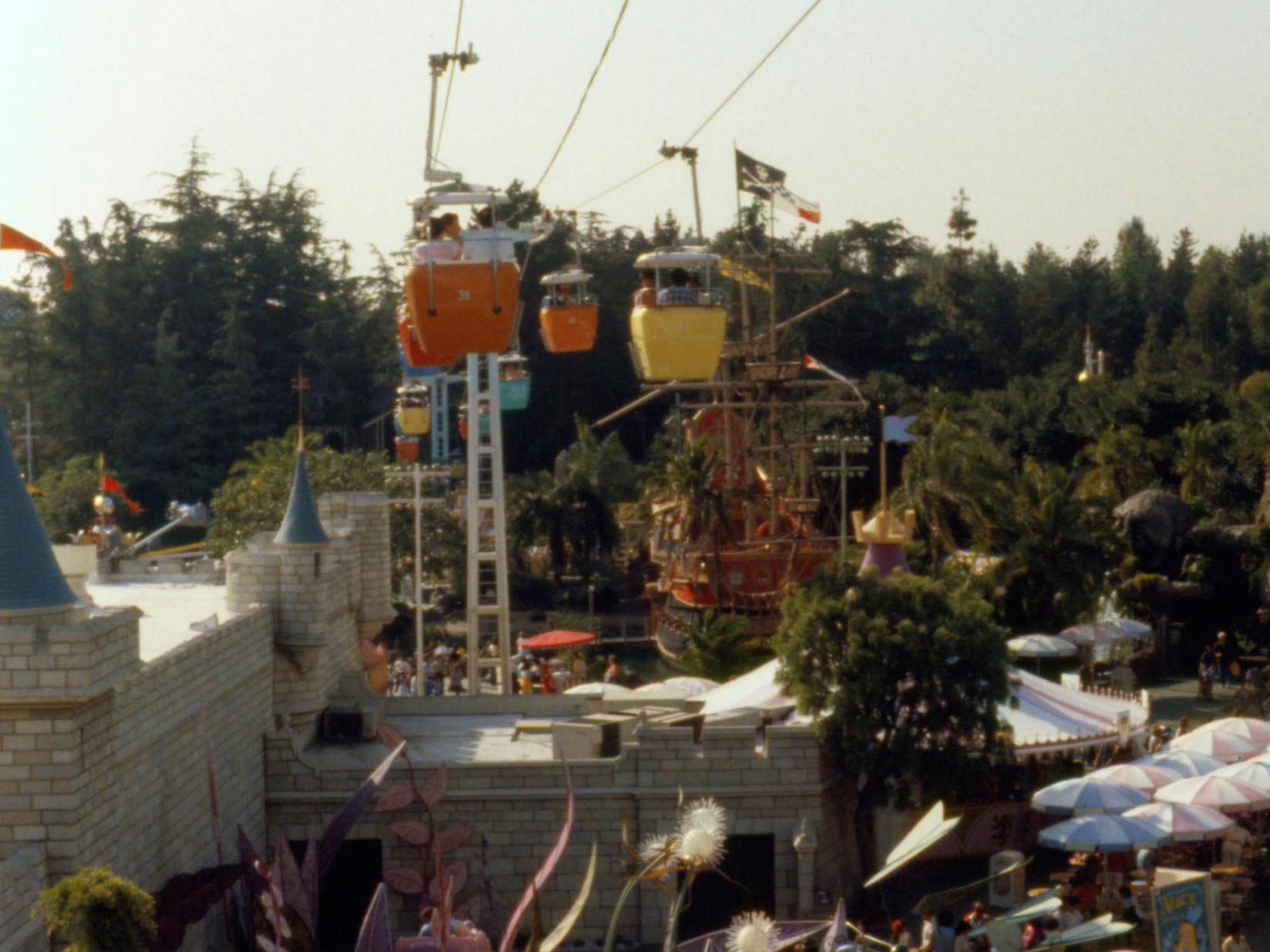 The Skyway opened in 1956. It was a gondola ride that transported people from Tomorrowland to Fantasyland and back. The colourful buckets were suspended from cables swinging high above the pedestrian paths.

The Skyway cables went right through the middle of the Matterhorn Bobsled ride. 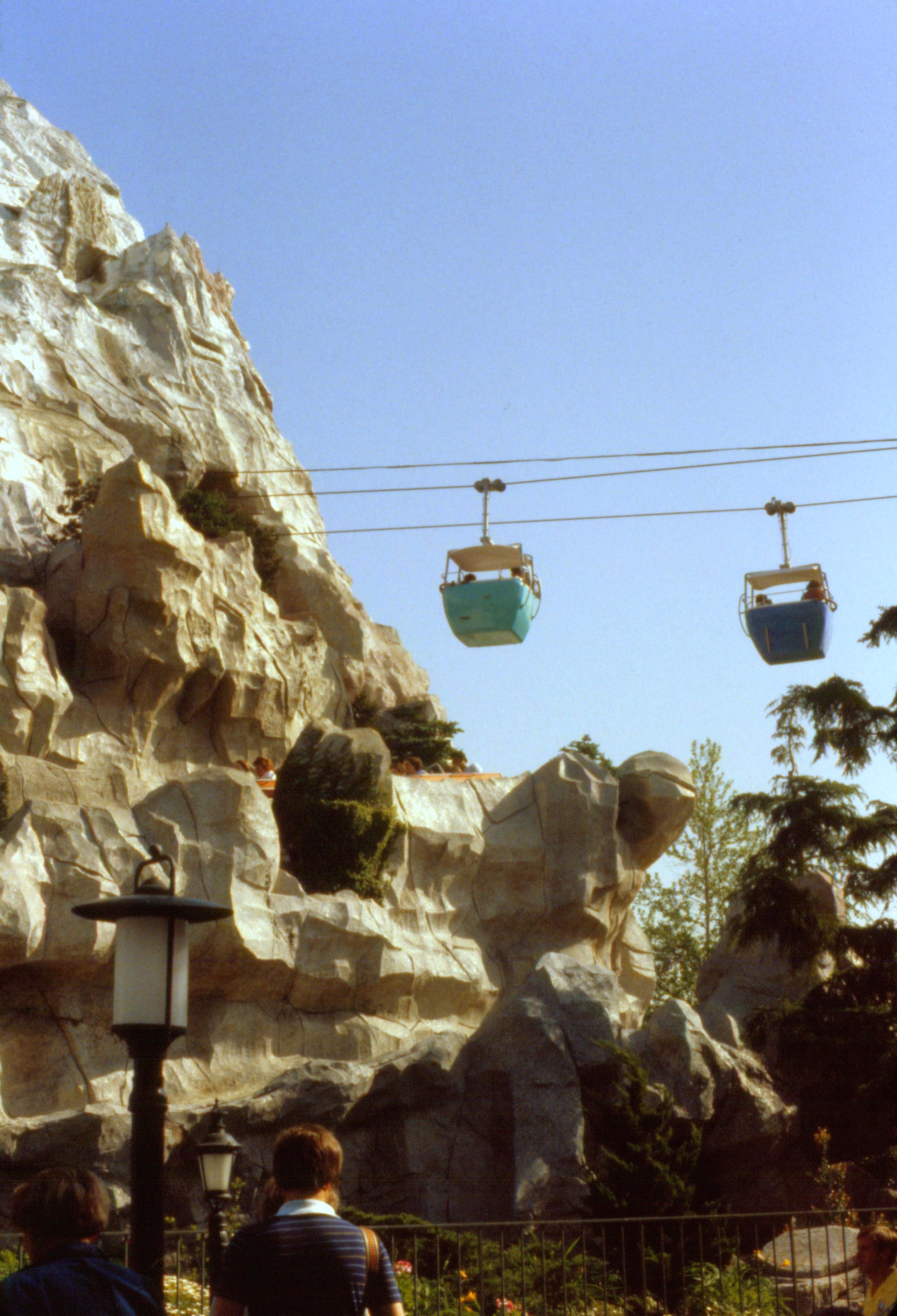 Gene Spesard/FlickrA look at the Skyway cables going into Matterhorn.

The height combined with open sides made the Skyway a bit of a thrill ride for any parkgoers (especially younger children) who were intimidated by heights. But the Skyway closed in 1994 after popularity waned and the park operations team needed to re-allocate employees to work the brand new Indiana Jones ride.

The Submarine Voyage ride was open for 40 years before it closed in 1998. 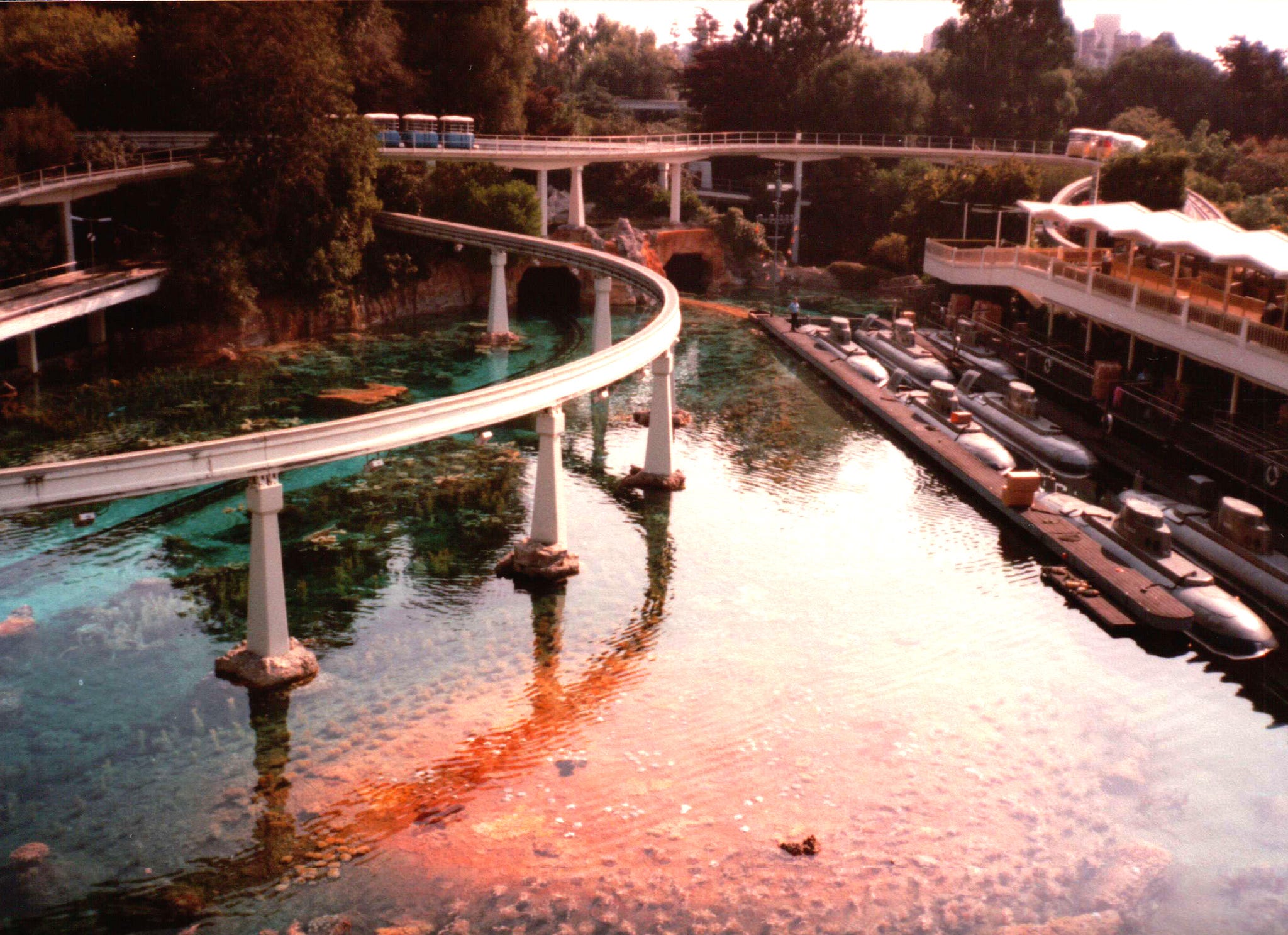 Thomas Duff/FlickrOne of the most scenic areas of Disneyland was always the blue lagoon which held the Submarine Voyage ride.

For the Submarine Voyage, guests entered the submarine at a docking station, and then looked out of circular windows as the sub made its way around a track.

The Submarine Voyage was closed in 1998 after surveys indicated that parkgoers wanted something “more exciting,” according to the Los Angeles Times.

Here’s a rare look at the lagoon in 2003 during construction: 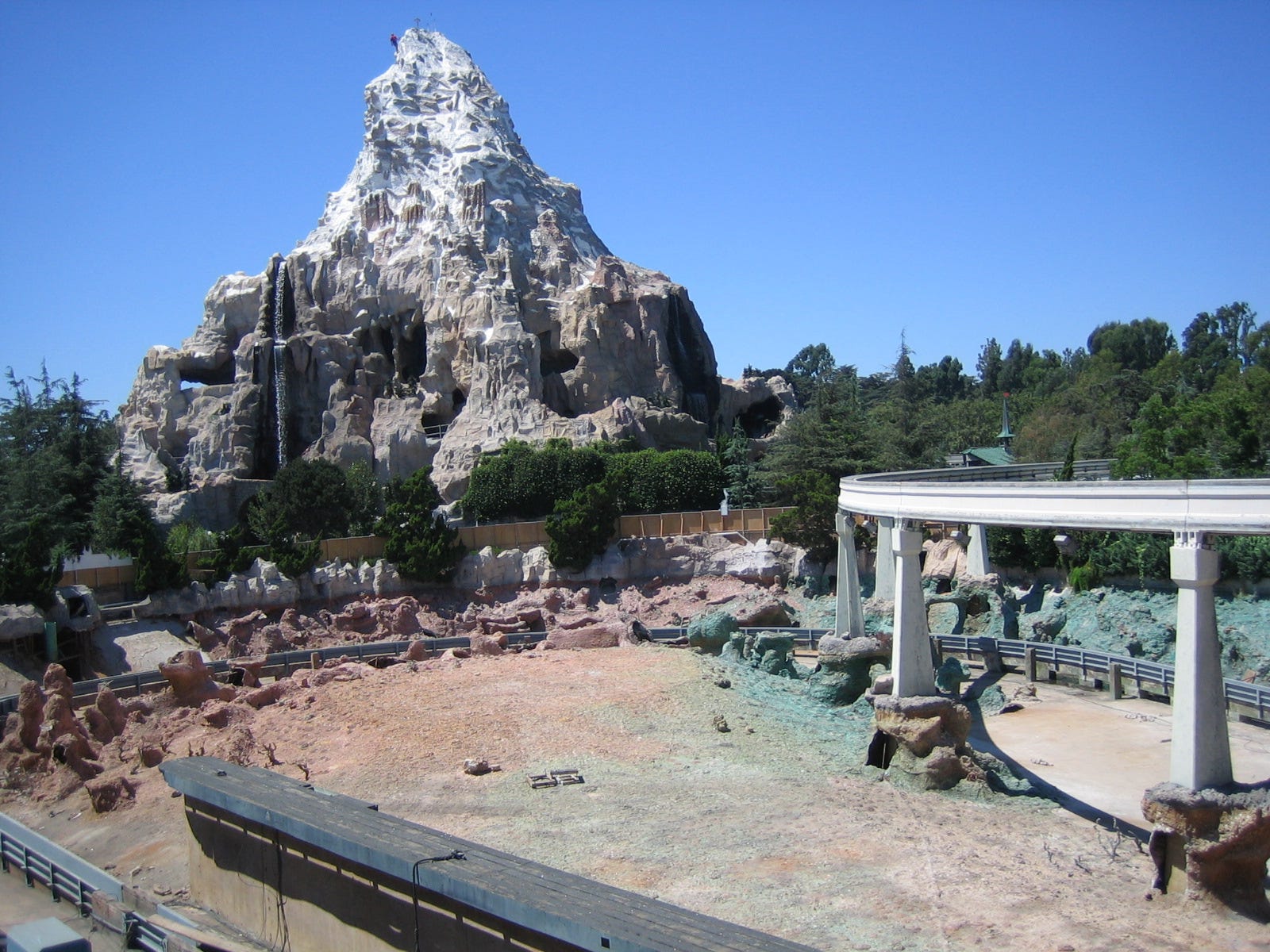 Though the Submarine Voyage closed in 1998, it was five years before Disney decided how to replace it. They found a solution in the 2003 Pixar hit “Finding Nemo.”

The “Finding Nemo” version of Submarine Voyage opened in 2007. 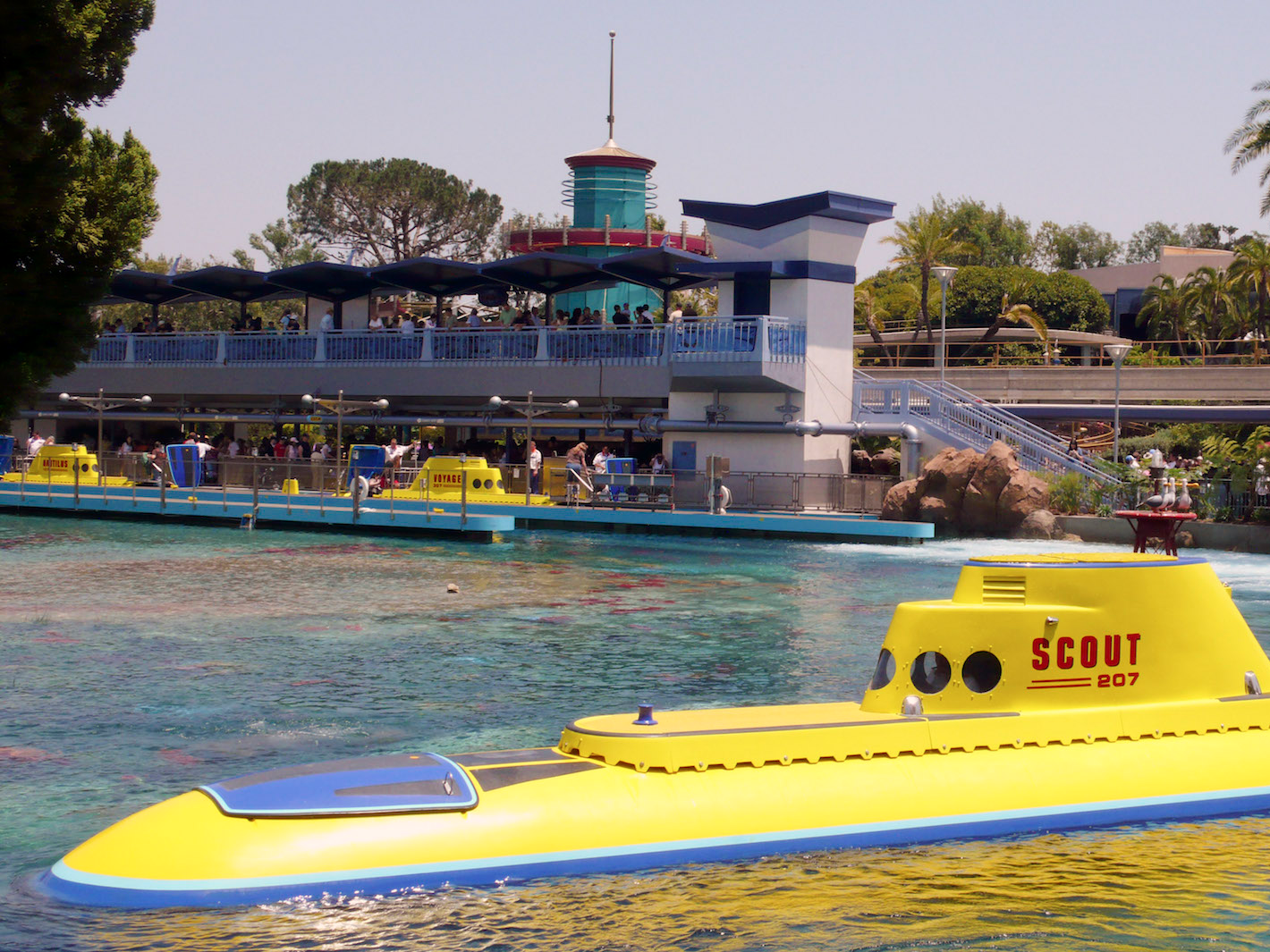 Associated PressThis is one of the newer rides inside Disneyland park.

Though the general set up was exactly the same, the updated version of Submarine Voyage incorporated new technology that makes the ride more engaging. Digital renderings of Nemo, Dory, Marlin and friends can be seen through the windows of the submarine as they go on an underwater adventure.

Midget Autopia was a miniature version of the classic Autopia car ride. 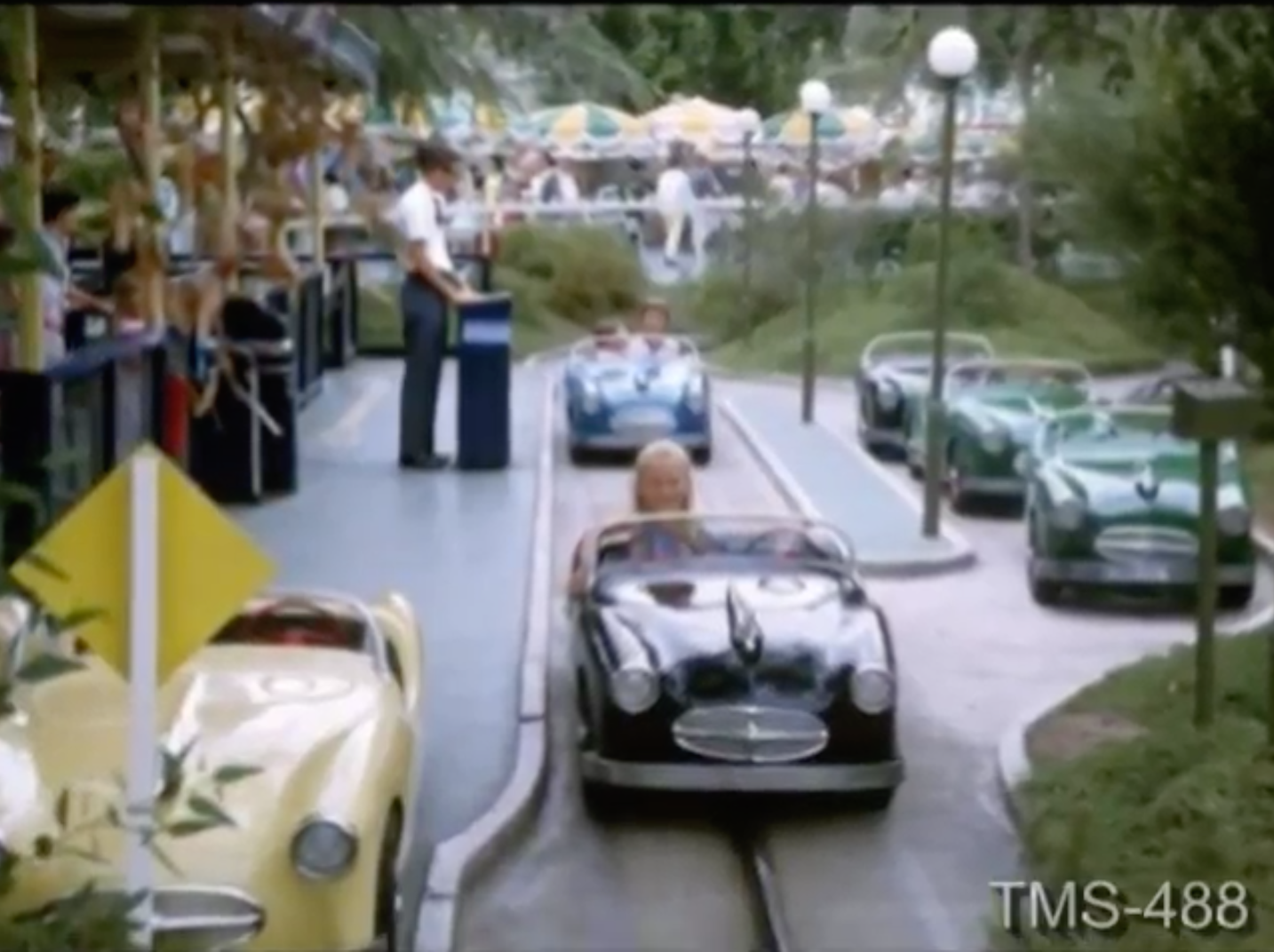 Midget Autopia opened in 1956, giving youngsters the opportunity to get the same car-driving experience that older kids and adults had with Autopia. The ride was remote controlled though, so the children were never in control of the vehicles. The ride used the word “midget,” which is now considered to be an offensive term, to refer to the cars, not the guests who would drive them.

Honey, I Shrunk the Audience! was a 3D theatre adventure. 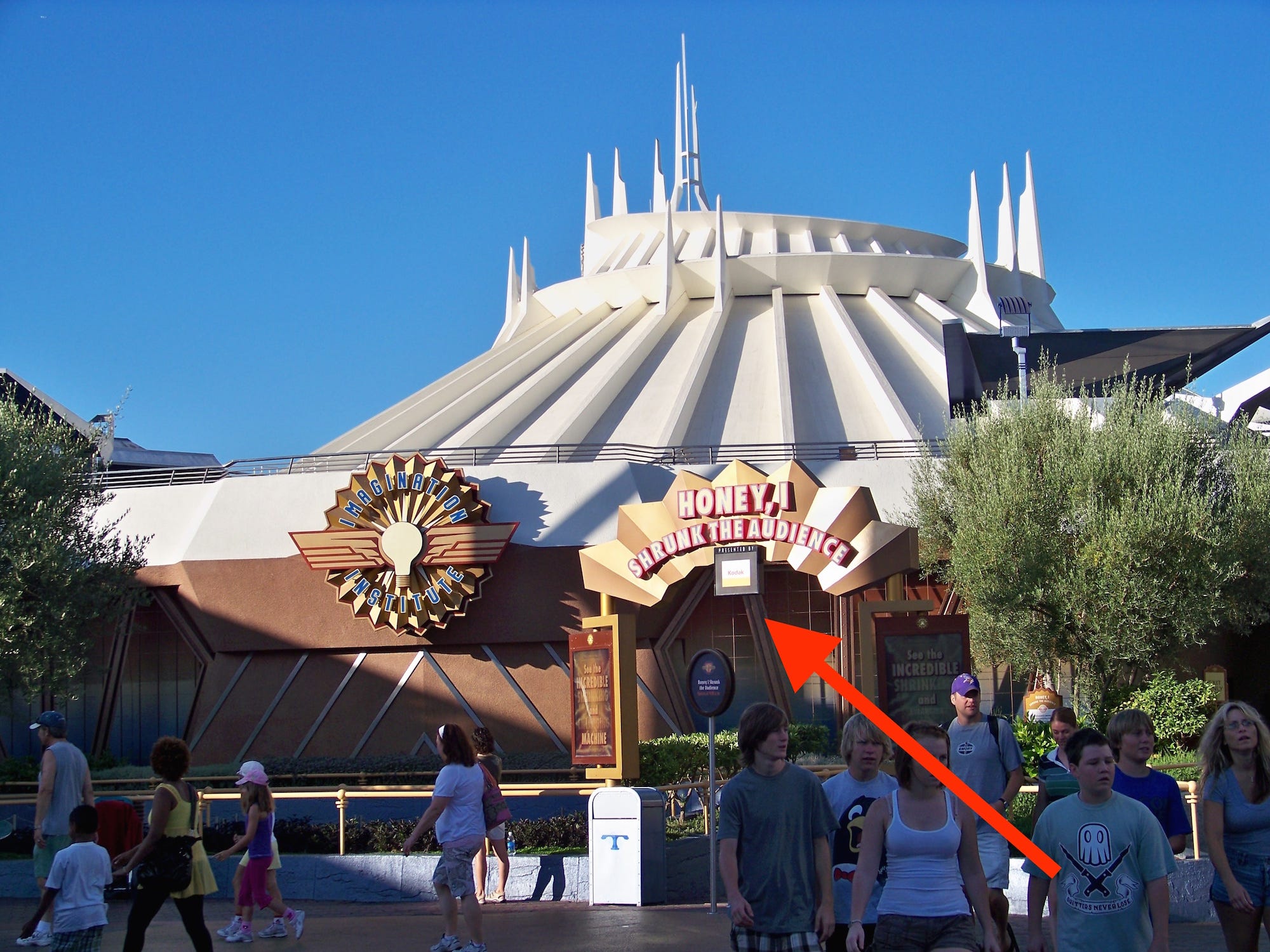 Loren Javier/FlickrThe theatre is right in front of Space Mountain.

Based on the movie “Honey, I Shrunk the Kids,” this attraction was a popular addition to Disneyland. It replaced “Captain EO” – a 3D sci-fi movie starring Michael Jackson that had been shown in the theatre from 1986 until 1998.

For Honey I Shrunk the Audience, guests donned “safety goggles” (a.k.a. 3D glasses) in order to watch an award ceremony. But a series of goofs leads to the theatre and audience being temporarily “shrunk.”

The 3D experience was open until 2010, and then the theatre went back to showing “Captain EO” after Michael Jackson’s death as a tribute to the dead pop star. But “Captain EO” was discontinued in 2014, and now the theatre sits unused.

Mission to Mars was a space-inspired thrill ride. 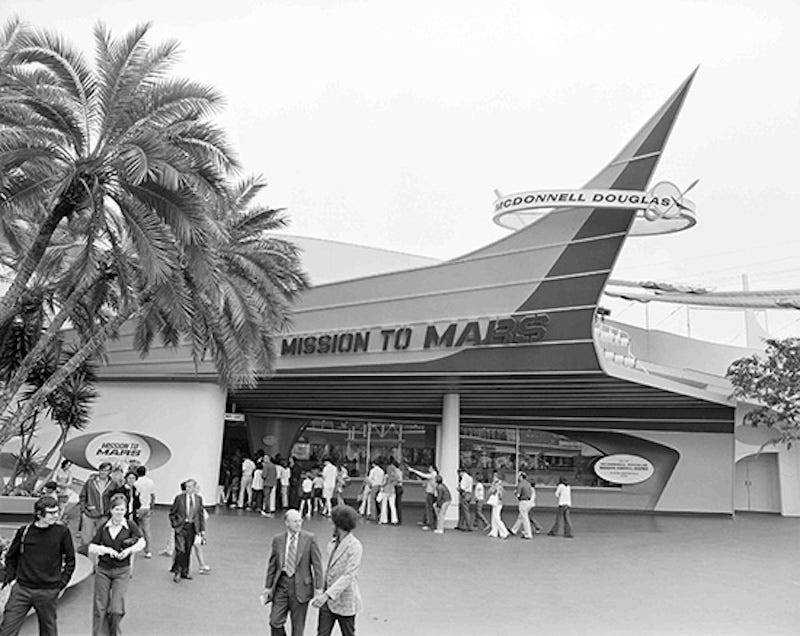 DisneyA look at the old Mission to Mars facade in Disneyland.

Originally called Rocket to the Moon, Mission to Mars was rebranded in 1975 – six years after NASA successfully put a man on the moon.

Tomorrowland needed to update its vision, and so a Mars mission ride was born. Visitors sat in a circular room (meant to replicate the inside of a space ship) and a projected video on the ceiling mimicked space flight.

Mission to Mars was closed in 1992 as Disneyland planned to revamp Tomorrowland once again. 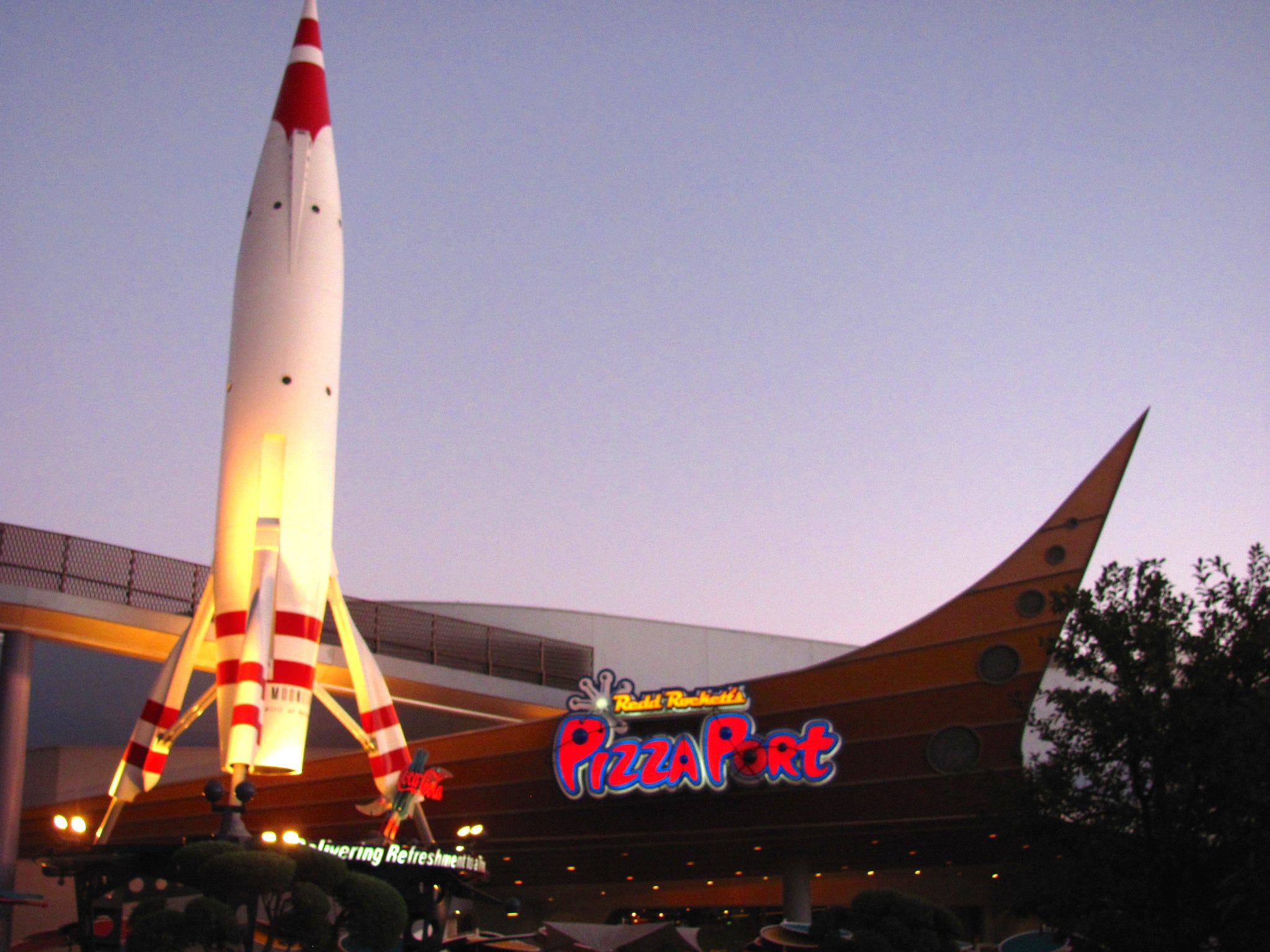 Jeremy Thompson/FlickrPizza Port in the 2000s.

But instead of a new ride, Disneyland parkgoers received a new restaurant. Redd Rockett’s Pizza Port reused the building (and the rocket design from Rocket to the Moon) as decor.

Now people the restuarant has been revamped again with a “Toy Story” alien theme.