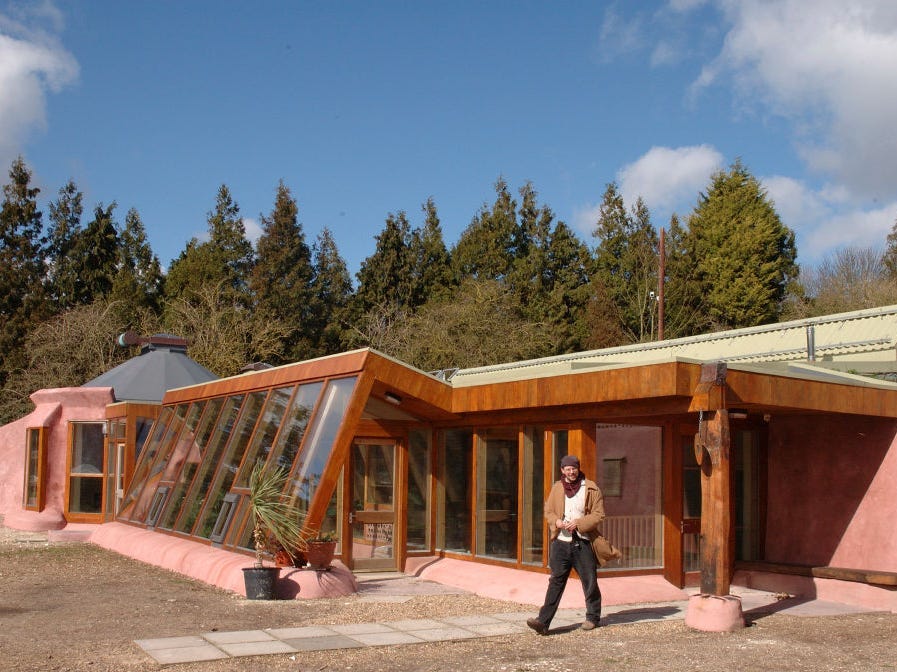 From Earthships to “hobbit homes,” these off-grid homes are just a few examples of how people are ditching city life in favour of living much more remotely.

While laws vary on the legality of living off-grid in a home powered by solar, wind, or hydropower, some are throwing caution to the wind and embracing the sustainable lifestyle.

Here are 20 photos of off-grid homes that will make you want to move to the middle of nowhere.

This narrow off-grid home was built in a tree canopy of a South African nature reserve. 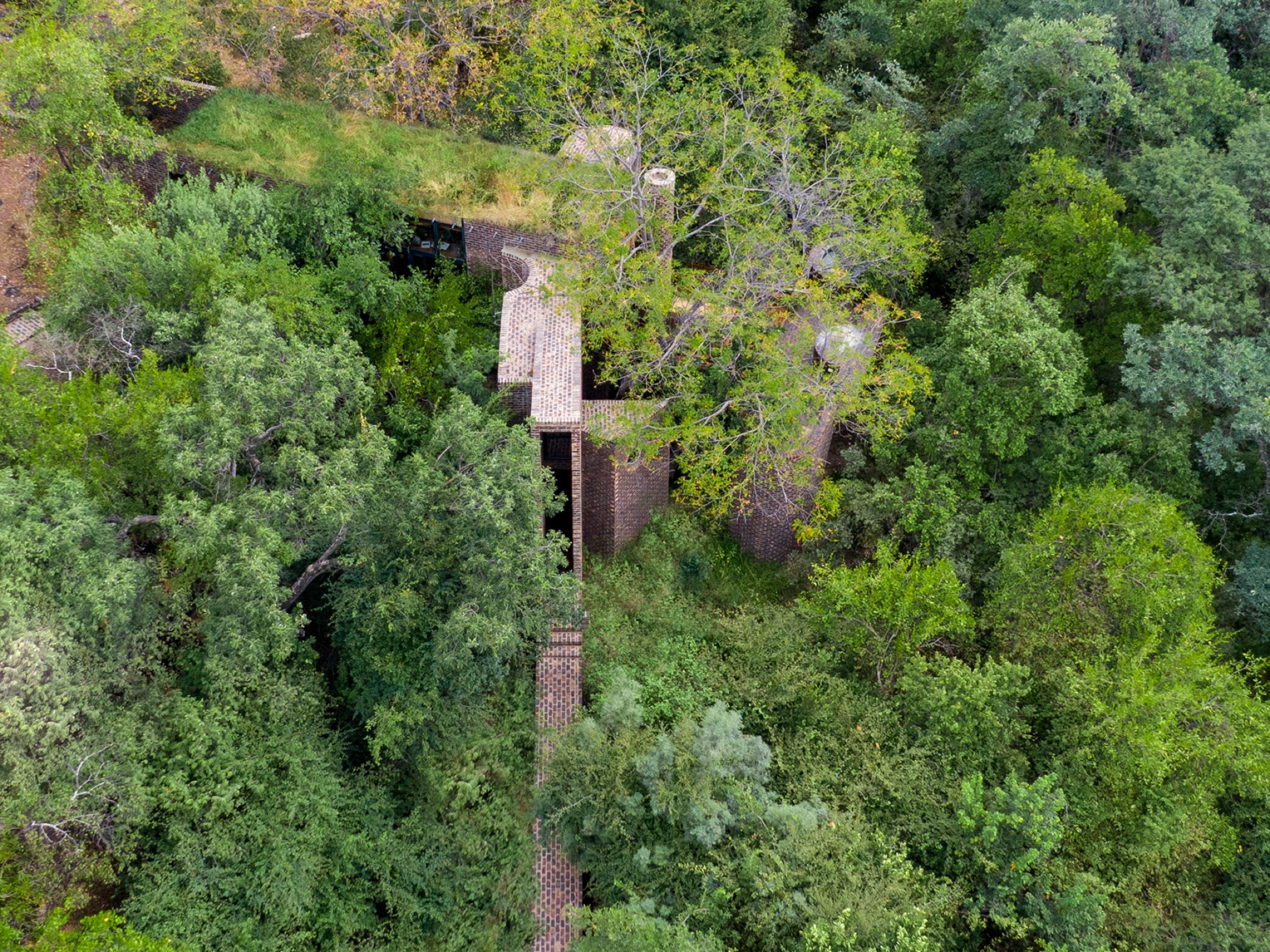 © Frankie PappasAn exterior view of the House of the Big Arch.

According to a previous article by Business Insider, Johannesburg-based designer Frankie Pappas designed the home to blend in with the natural surroundings, making it virtually invisible beneath the tree canopy.

The structure relies on solar panels and rainwater collection to power the remote home. 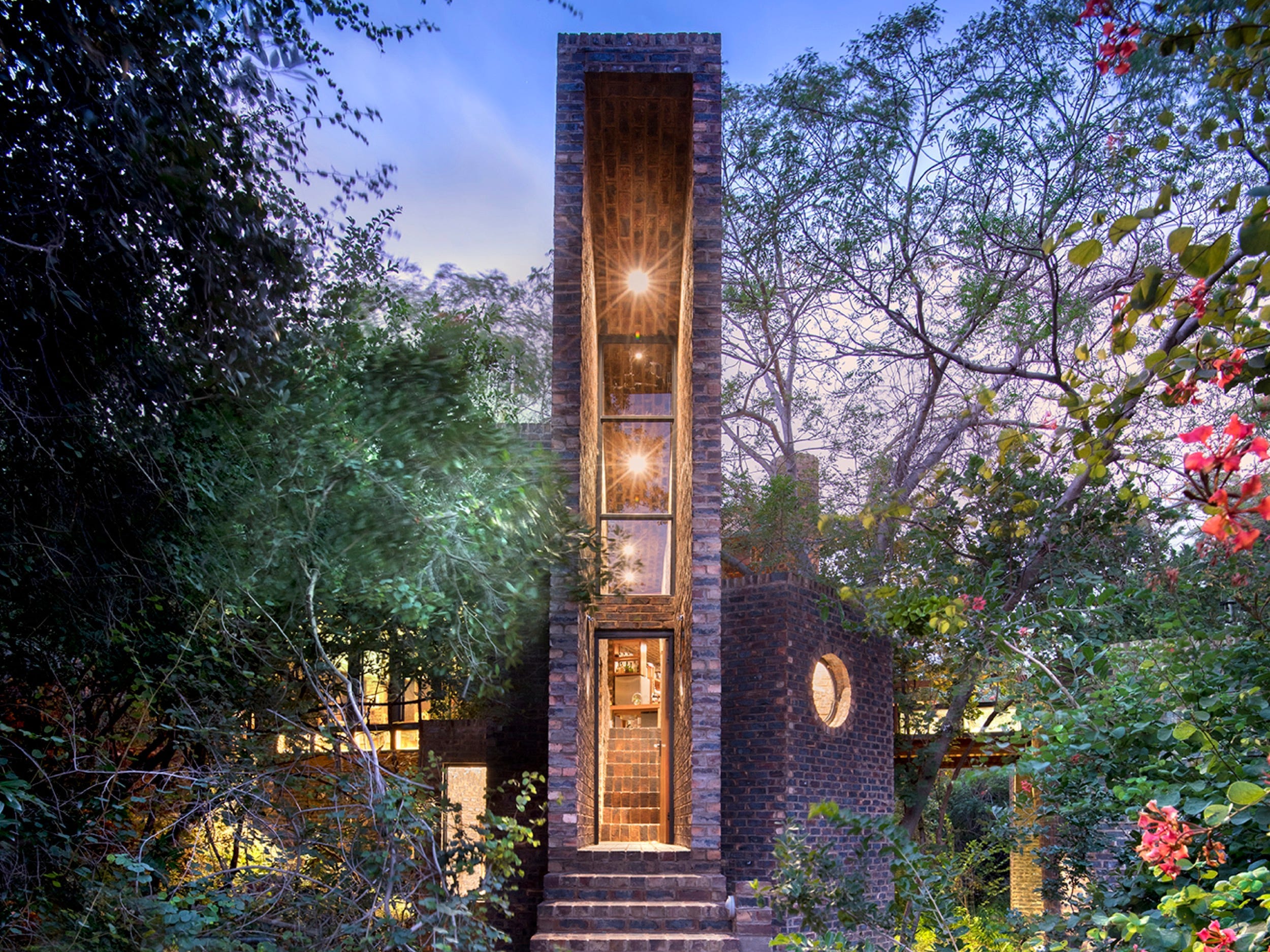 © Frankie PappasThe entrance to the House of the Big Arch.

Some parts of the home, which is officially called the House of the Big Arch, measure just 11 feet wide, giving the house a narrow appearance.

No trees were taken down during the construction of the home, which features a sun-lit lounge, dining room, kitchen, and even an outdoor deck with a fireplace. 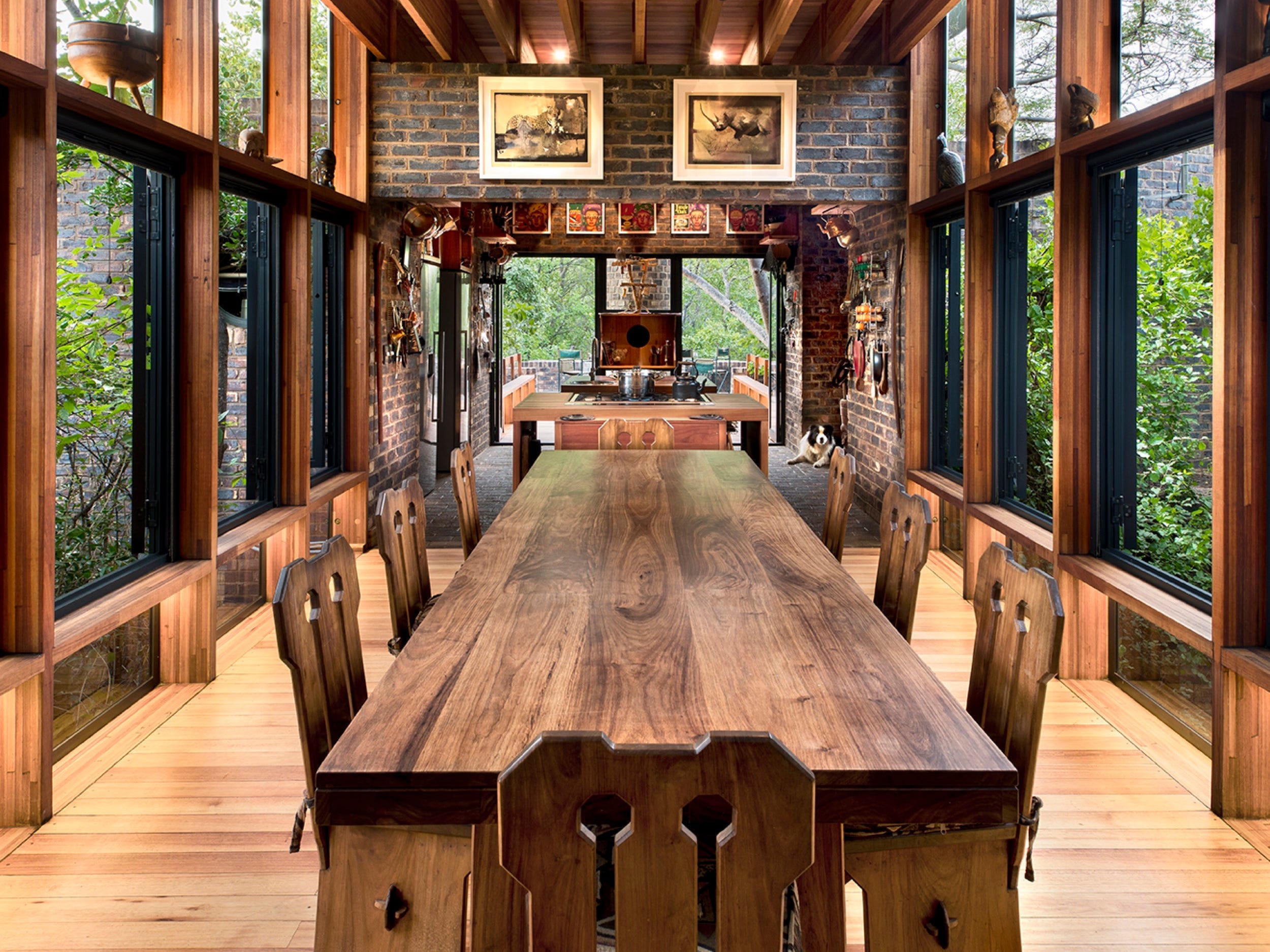 © Frankie PappasThe dining room inside the House of the Big Arch.

Other features include a wine cellar, multiple courtyards, and an above-ground pool.

This tiny pod called an Ecocapsule is powered by solar energy and wind. 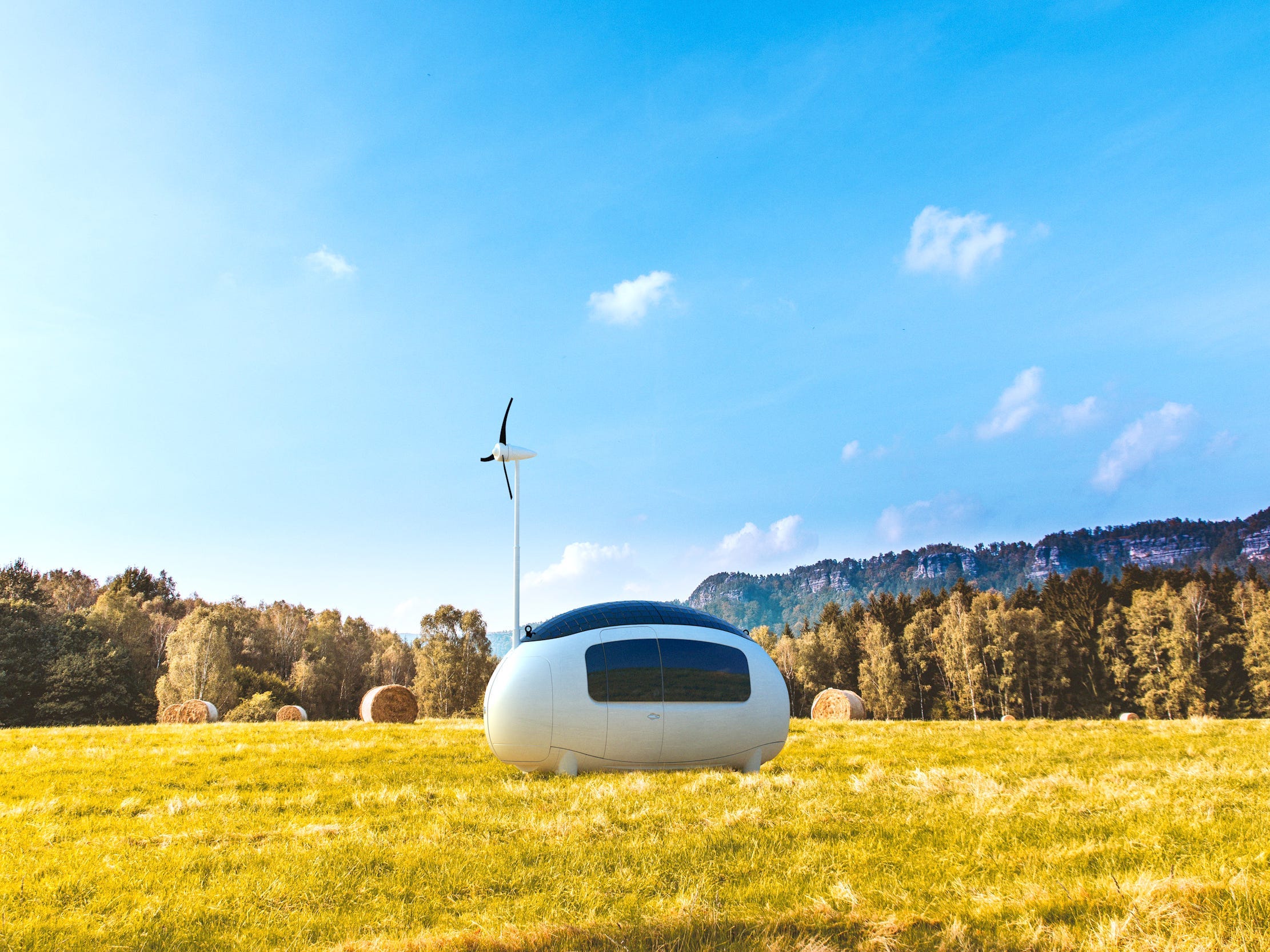 According to Business Insider, the pod is fitted with solar panels, a wind turbine, and a rechargeable battery should either of the sustainable energy options fail.

The egg-shaped design of the pod is meant to prevent heat loss. 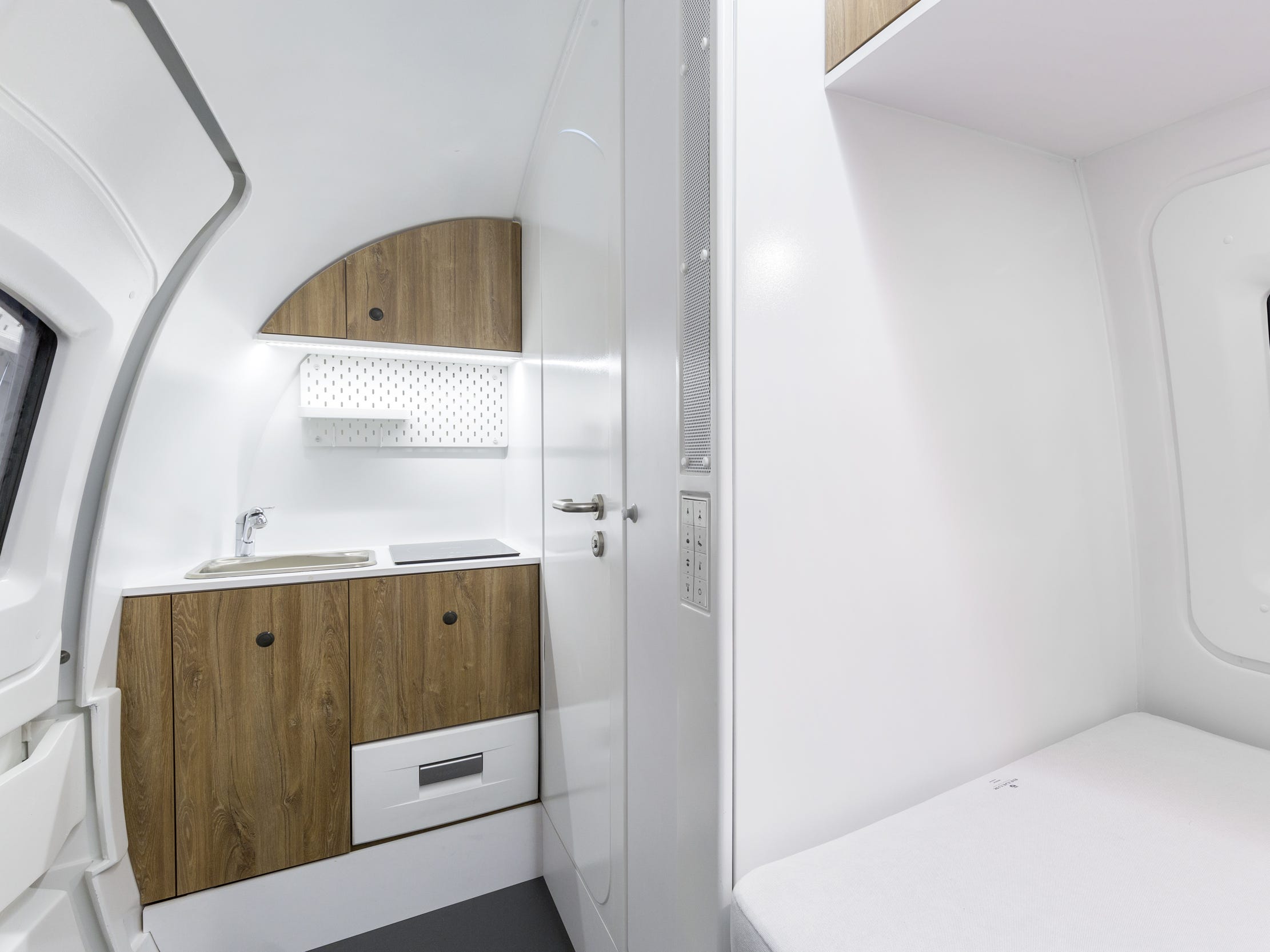 The pod is able to collect water that lands on its surface and filter it for drinking and bathing water. A bed, small working and dining space, shower, and kitchenette fit inside the Ecocapsule.

This Phoenix Earthship looks like a green and blue oasis in the middle of the New Mexico desert. 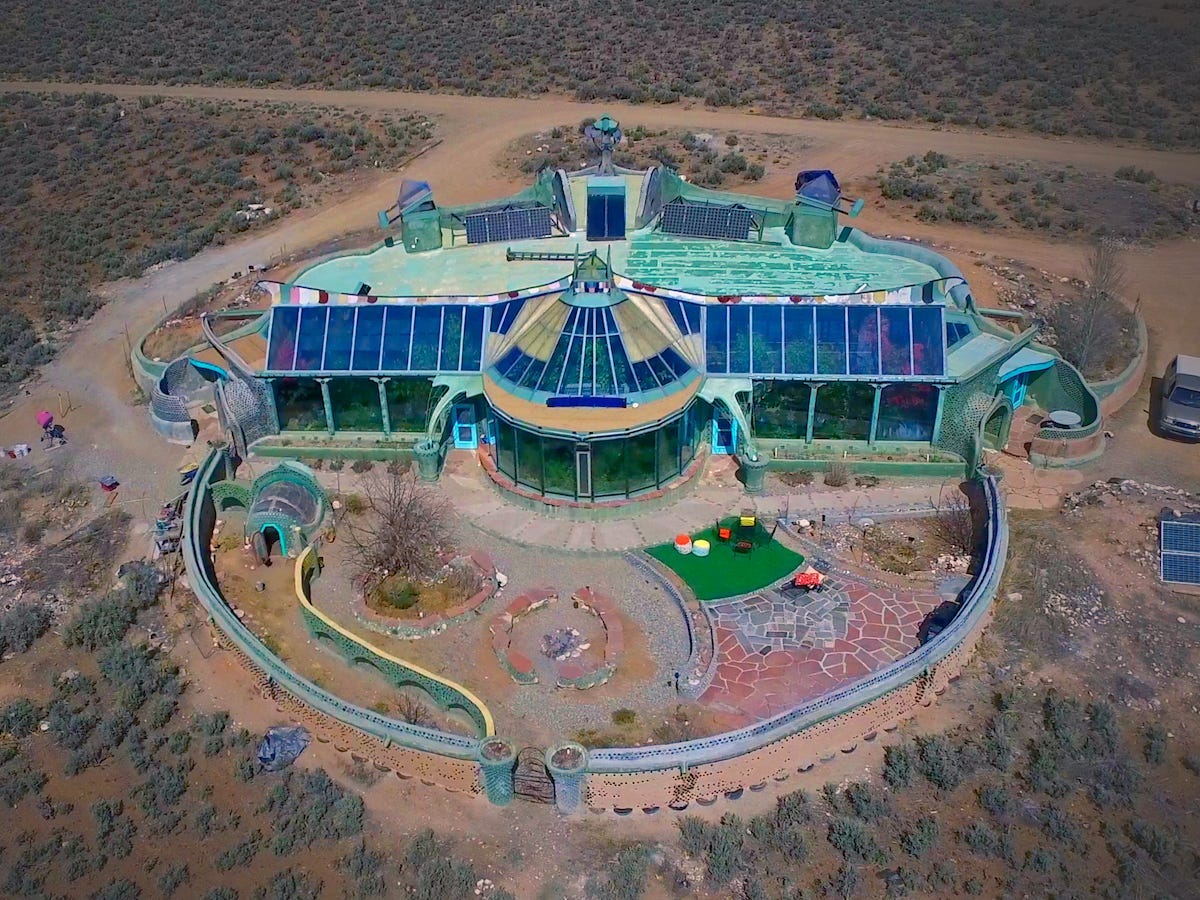 The home, which is part of a community of other “Earthships,” is made from recycled bottles, cans, and old tires, and is completely autonomous. 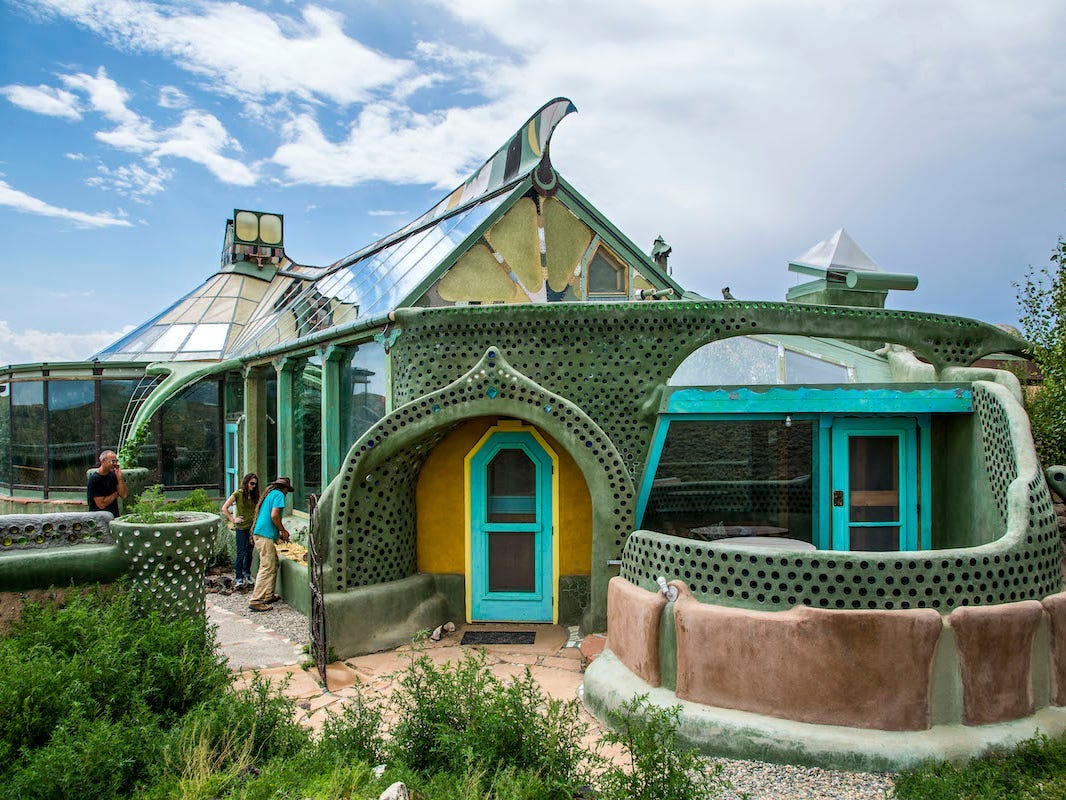 Inside the home are two bedrooms, three bathrooms, and plenty of windows to gaze out at the surrounding desert and night sky.

Indoor gardens with plants, fruits, and vegetables are also a major part of the Earthship’s design. 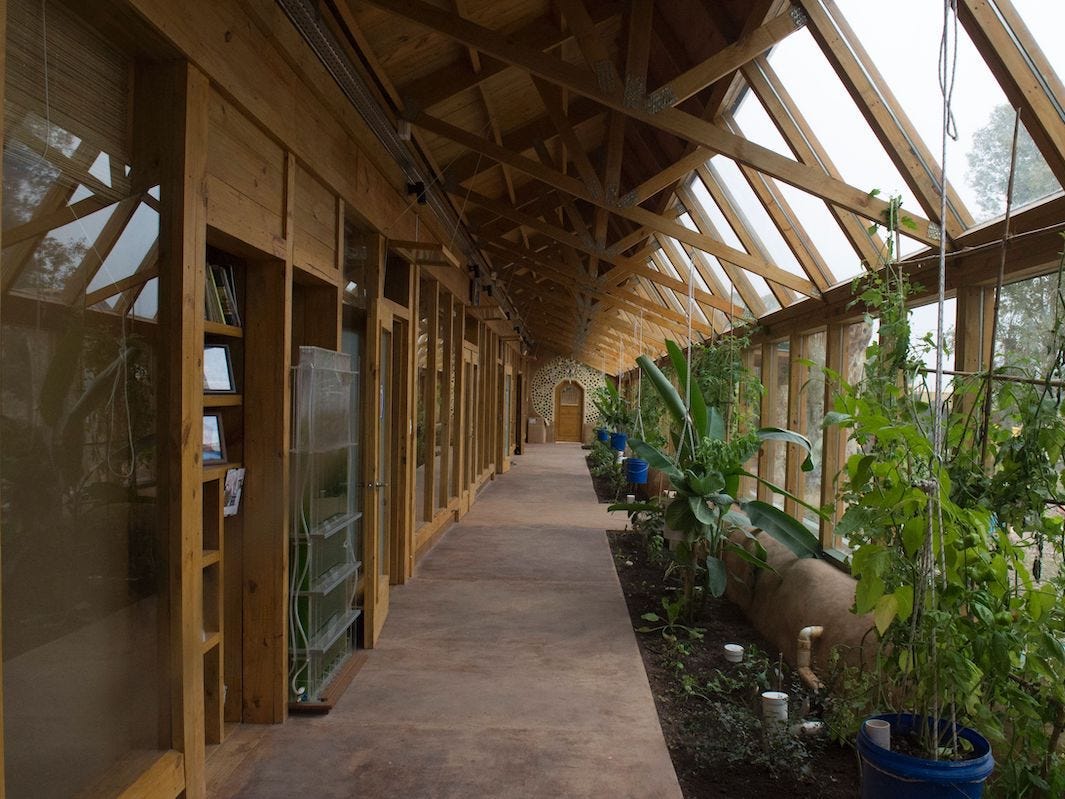 In addition to the greenhouse and food garden, the Earthship allows guests access to an outdoor fire pit, fish pond, and modern amenities like WiFi and Netflix, which are powered by solar energy.

Guests from all over the world have stayed in the Phoenix Earthship. 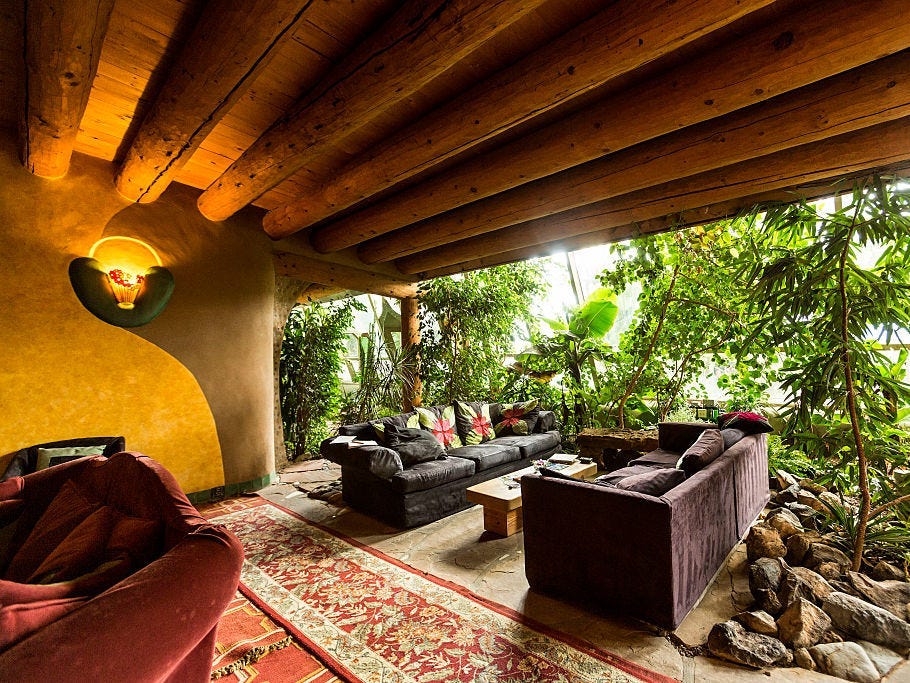 The home is currently available to rent on Airbnb for $US245 per night.

This Earthship in Brighton, UK, was built by the organisation Low Carbon Trust. 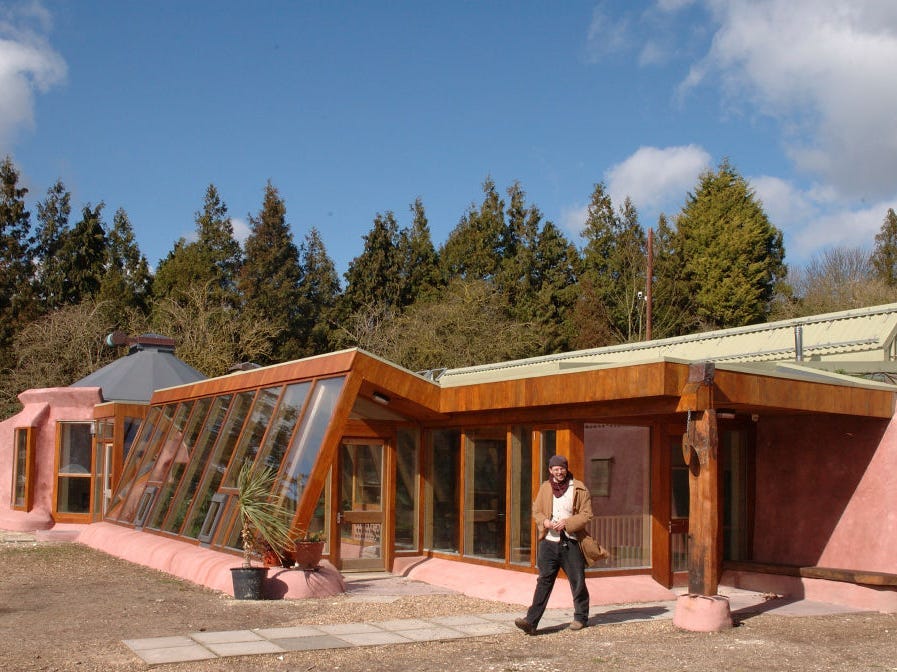 The structure is completely sustainable and autonomous, according to the Low Carbon Trust. Powered by solar energy and water harvesting, the Earthship is able to cool and heat itself.

It is the first Earthship to be built in England. 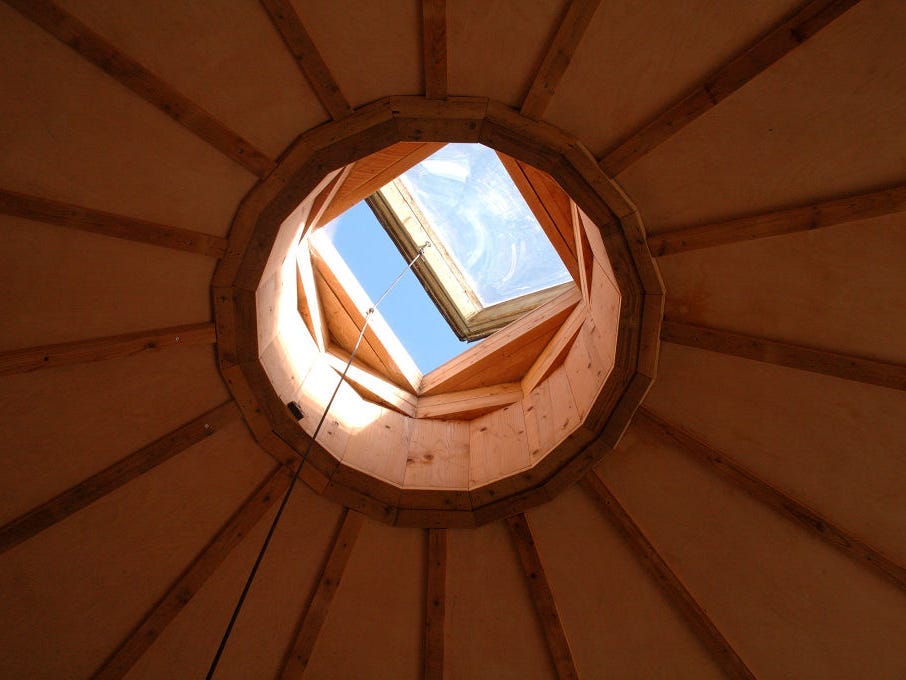 The Normandy Earthship in Ger, France, is also self-sufficient. 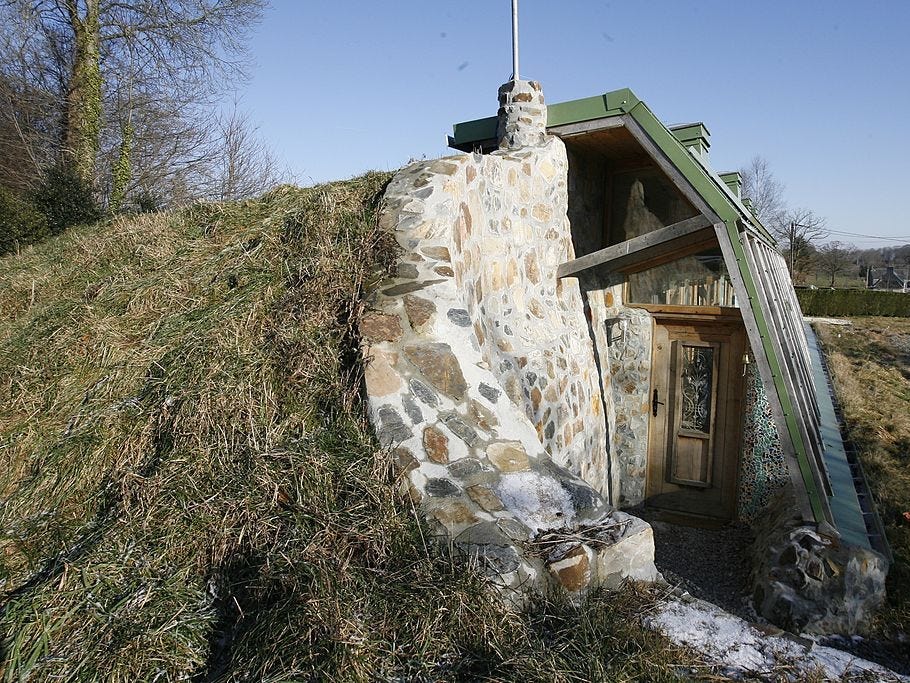 According to The Independent, the home is completely off-grid and runs solely on solar energy, wind, and rainfall.

The main exterior wall was constructed with tires, while the interior walls were built using recycled bottles embedded into cement made from mud and straw. 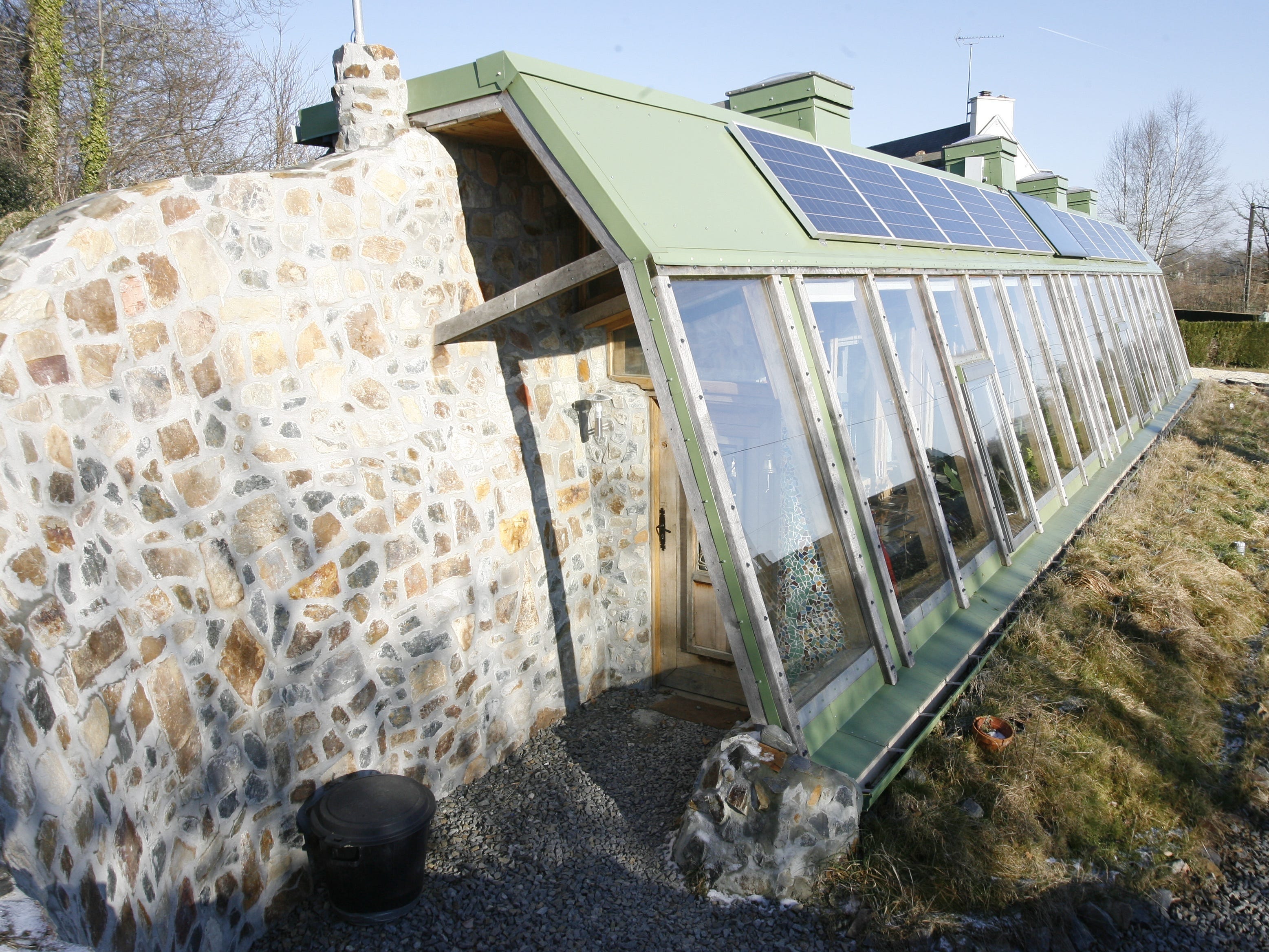 One of the most unique parts of the Normandy Earthship is that it’s buried halfway underground.

However, as The Independent explains, this can make the air inside the Earthship feel quite damp. However, since the Earthship includes a wood-burning stove, this is a quick hack to dry the air out.

The Earthship has three bedrooms for guests. 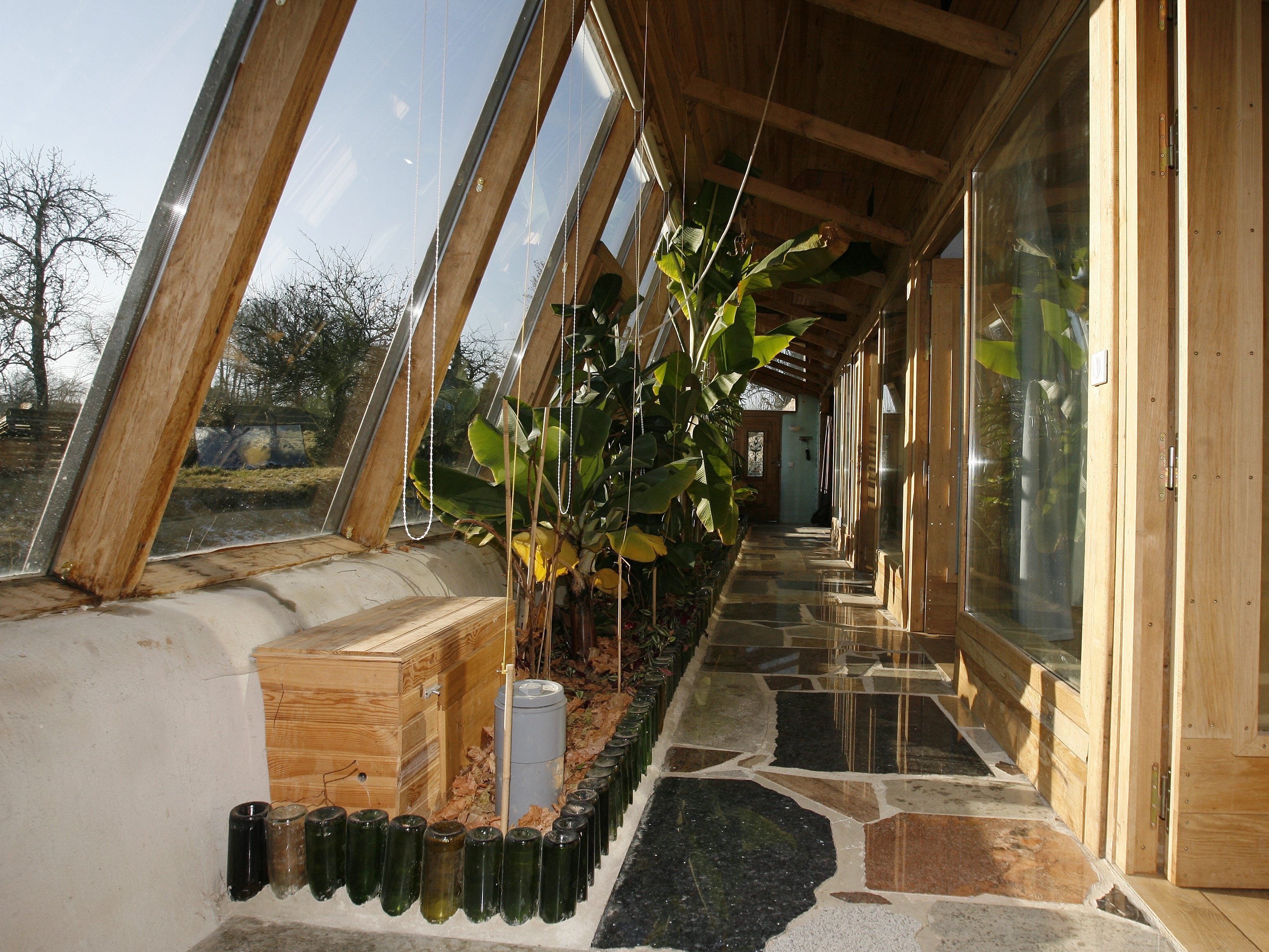 Pierre HOUNSFIELD/Gamma-Rapho/Getty ImagesThe interior of the Earthship in Normandy.

The sustainable home also has access to a garden and a nearby grocery store, a butcher shop, and a boulangerie. 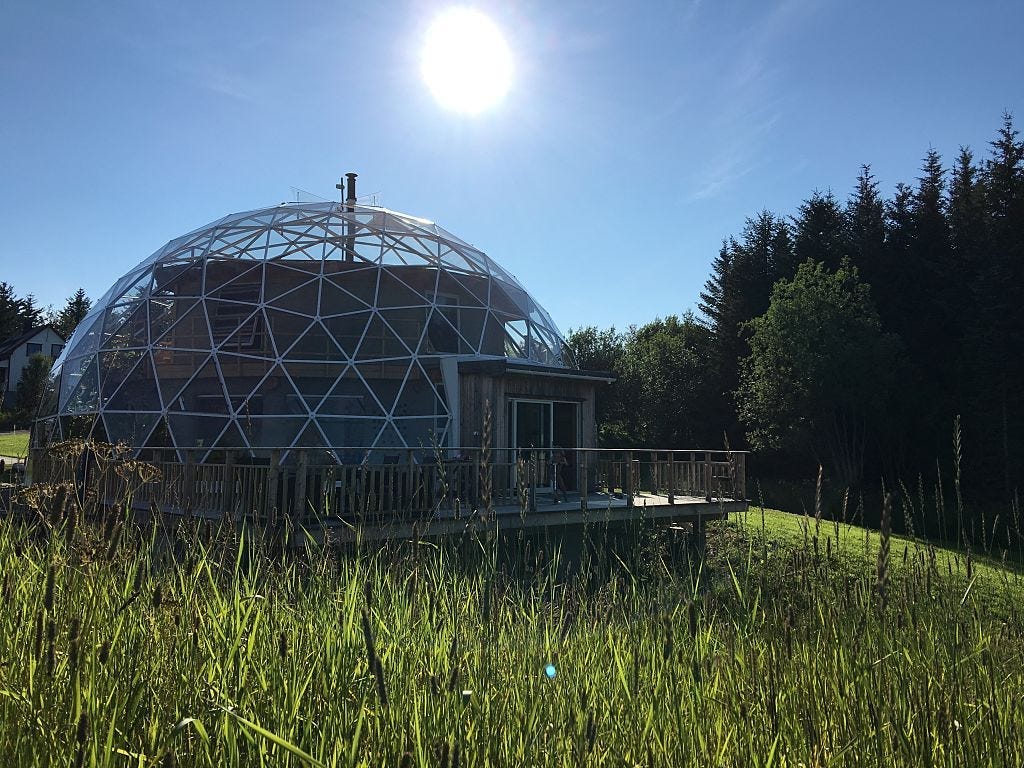 The sustainable home is located on Sandhorney Island, which is found in northern Norway. The dome measures about 24 feet high and is made up of 360 glass panels.

Ingrid and Benjamin Hjertefolger began the project in 2012 and moved in with their four children a year and a half later, according to Barcroft Planet.

Inside the dome-shaped abode, the Hjertefolgers are able to grow their own produce. 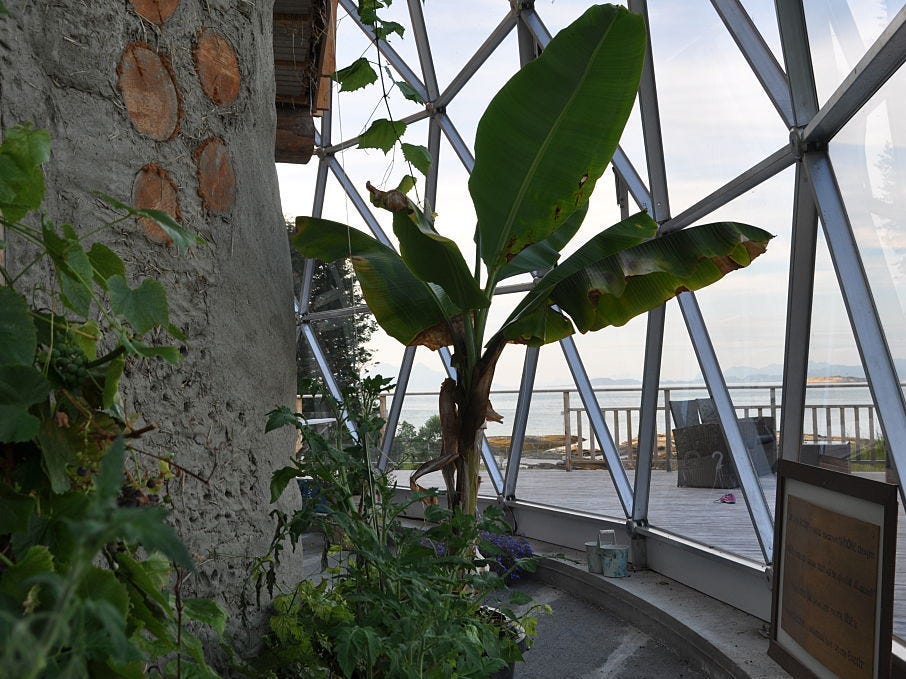 “The dome is made out of toughened glass and aluminium. It provides shelter from the Arctic Circle, it gives us a longer and warmer growing season for our fruit and vegetable garden and it allows us to use less energy to heat our house,” Benjamin Hjertefolger told Barcroft Planet.

The dome is equipped with a modern bathroom and uses a water treatment system that allows the family to sustainably source water. 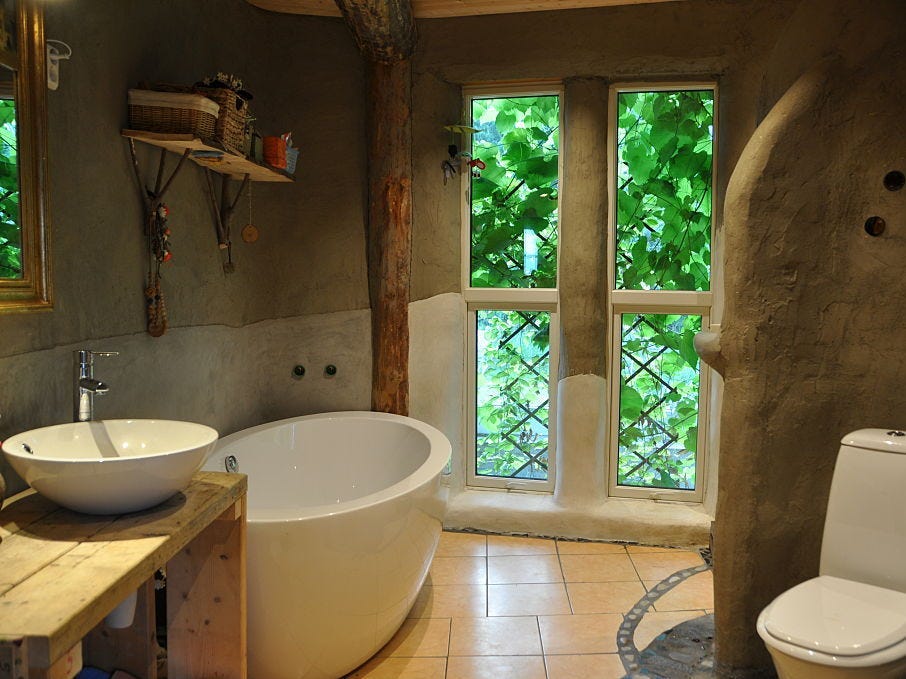 Ingrid Hjertefolger says their children even helped build the walls of their own rooms.

“They love the house and they say that they never want to move, they want to grow old here with us,” she told Barcroft Planet. 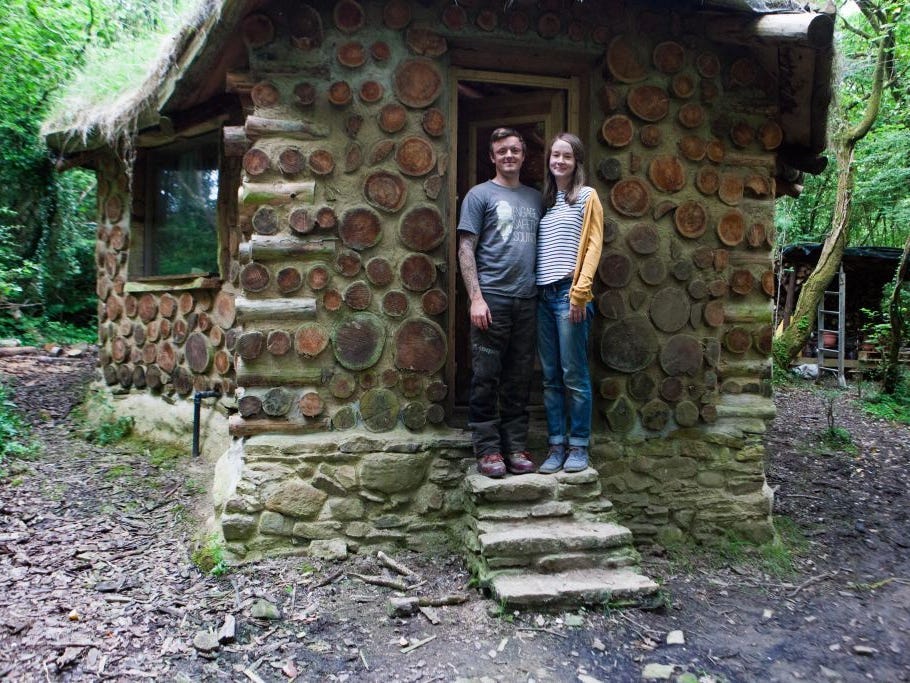 Harbour told Barcroft he built the eco-friendly home from scratch after stumbling across an 18.5-acre plot of land in South Wales on eBay. After selling his two properties and quitting his job, he moved into the home.

The house took about a year to complete and is almost completely made using natural materials. 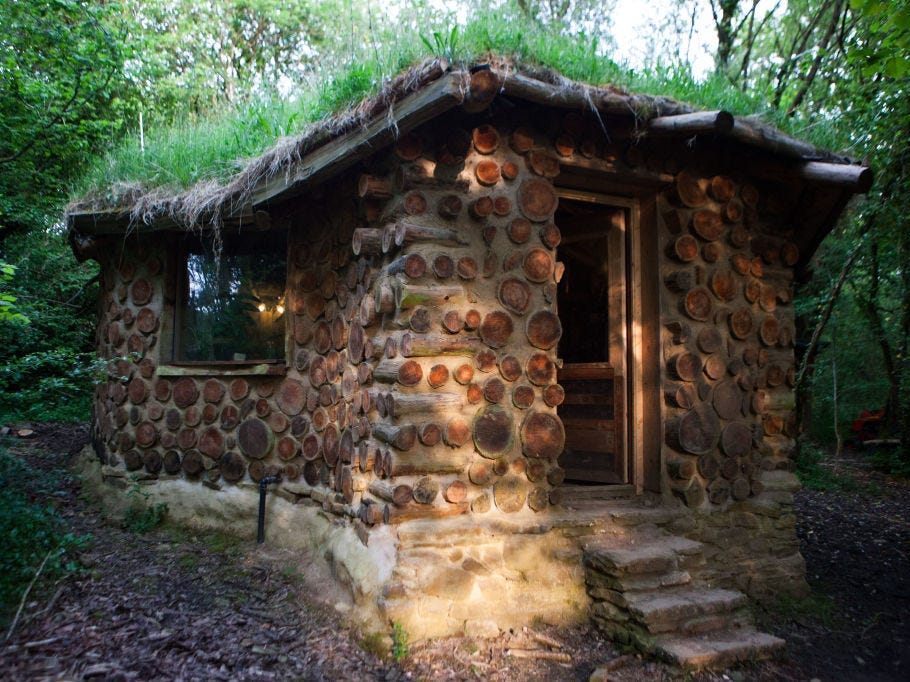 “There is some foam installation that isn’t natural in the roof. Then just things like screws, some pipes and fittings and things like that,” Kris Harbour told Barcroft. “Everything else is wood, sand, clay, straw and that’s it.”

The small studio-style home is off-grid and powered by solar and hydropower. 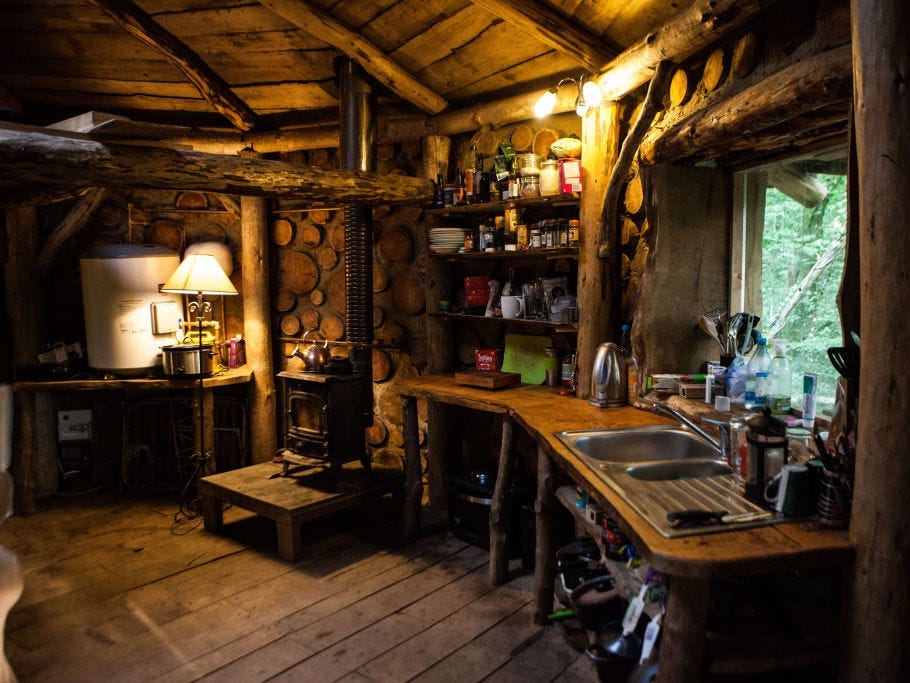 Harbour used a combination of found and gifted items, including old windows and a glass fridge door acting as a larger window, to complete the home.

The engineer also says that with minimal maintenance the house should last up to 20 years, and even longer with more work on the home.