OccipitalOccipital sells software and hardware that can accurately map and measure a room.

Apple has said it’s going all-in on augmented reality, a new technology that uses advanced cameras and sensors to understand the world around our devices.

TapMeasure, which is now available for download, is an iOS app that can automatically make measurements and draft floor plans with an iPhone. It can create both simple 2D floorplans and 3D room models.

One target audience for the app is interior designers, who can now make to-scale CAD files from an app. But normal homeowners might want to check the app out to do things like simple measurements or level framed items or artwork. Occipital was founded in 2008 and has raised $US23 million dollars in venture capital, according to PitchBook data. It not only makes AR software and apps, it also makes a device called Structure Sensor for iPads and iPhones that’s an advanced 3D sensor that can take accurate measurements from farther away than Apple’s new front-facing 3D sensor on the iPhone X.

Occipital uses the Structure Sensor in a device it calls Bridge, a headset that runs AR software. Occipital also  previously released an app called Canvas that used the $US379 sensor to create detailed CAD models of rooms.

But now some of those features are available in an app for iPhones launched in the past two years that you can download without needing any specialised hardware. Take a look:

TapMeasure can accurately measure parts of your home or office. It works horizontally, too. Tap spots in the camera to outline important features in your room. And generate a to-scale birds-eye view floor plan which you can use for interior design purposes. The 'Smart Level' feature lets you ensure that you don't have crooked frames in your home. TapMeasure can also be used to make sure a new piece will fit into your room before you buy it. It can automatically detect doors, windows, and artwork. Watch a promo video below: 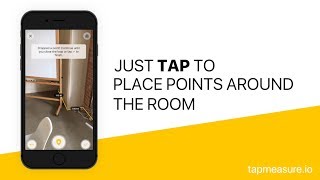