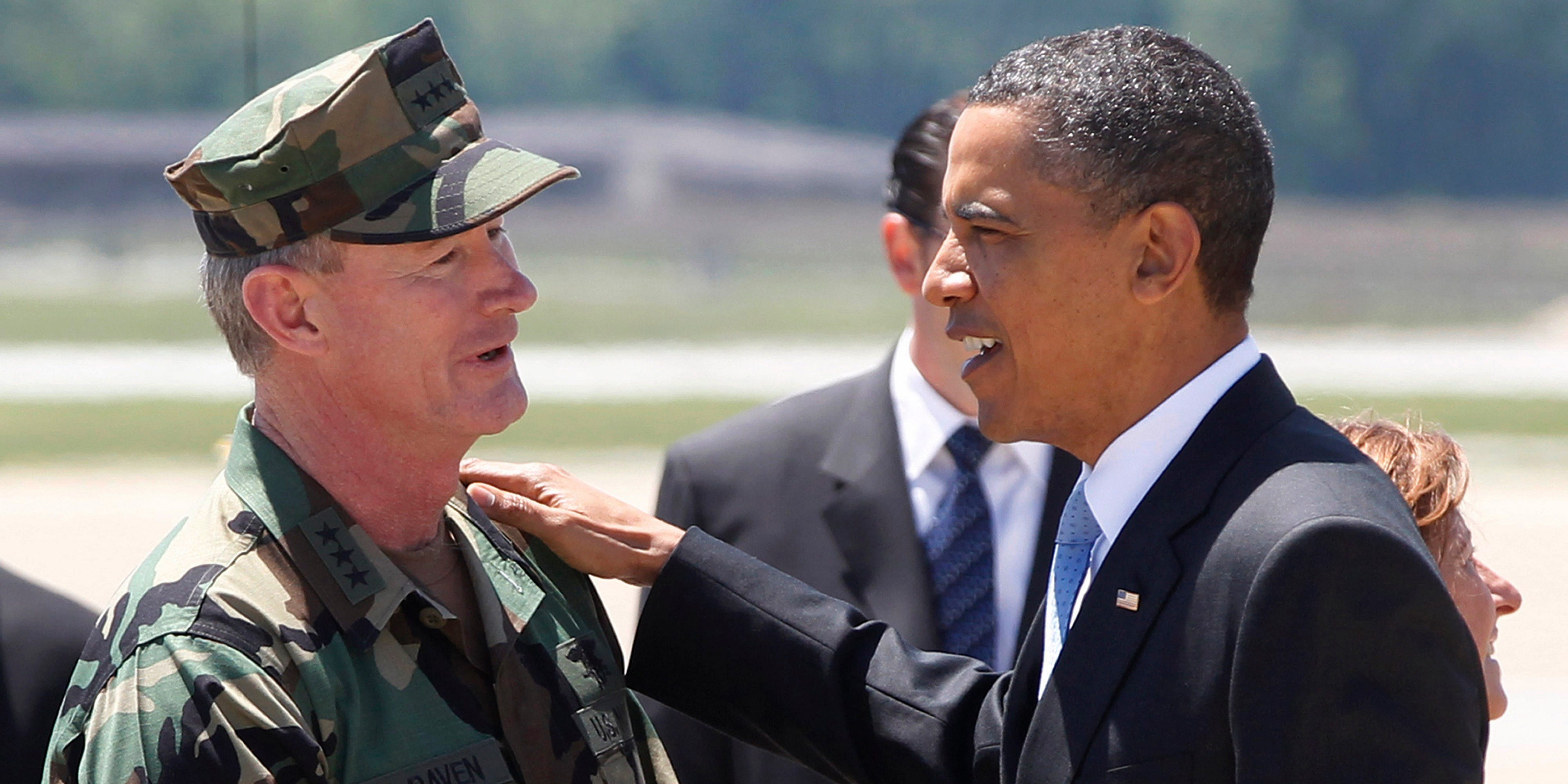 As president, Barack Obama thanked Adm. William McRaven, the Navy SEAL who oversaw the raid that took down Osama bin Laden, by giving the military leader a tape measure.

While the unusual gift was reported in 2011 a few days after the May mission, both the former president and the retired admiral recounted the inside joke in more detail in their respective memoirs.

The bin Laden raid was executed by members of SEAL Team Six, who, after a great deal of planning and preparation, slipped into Pakistan early on May 2 (local time) and eliminated the man behind the 9/11 terrorist attacks.

When the SEALs returned to Jalalabad, Afghanistan, with bin Laden’s body after the early-morning raid on his compound in Abbottabad, Pakistan, McRaven, who was then the head of Joint Special Operations Command, contacted Obama via video teleconference.

“McRaven explained that he was looking at the body as we spoke, and that in his judgement it was definitely bin Laden,” Obama wrote in his new book, “A Promised Land.” “To further confirm, McRaven had a six-foot-two member of his team lie next to the body to compare his height to bin Laden’s purported six-foot-four frame.”

“Seriously, Bill?” Obama recalled himself joking to the admiral. “All that planning and you couldn’t bring a tape measure?” He wrote that it was the first light-hearted thing he’d said all day.

McRaven wrote in his book “Sea Stories” that when he and some fellow SEALs pulled bin Laden’s body out of the bag in Afghanistan after the Operation Neptune Spear raid, he took a look at the remains, noting to himself that the dead man was tall, just as bin Laden was said to be.

He turned to one of the special operators nearby, a tall sniper, and asked, “Son, how tall are you?” He caught the SEAL off guard and had to repeat the question, to which the SEAL replied, “Six foot two.”

“Good,” McRaven said. “Lie down next to the body.”

Apparently confused, the operator asked, “You want me to lie down next to the body?” The admiral repeated it, and the SEAL did as told. It was visibly clear the dead man was roughly 2 inches taller.

Talking to Obama over video afterward, he told the president: “Sir, I can’t be 100 per cent sure until we do the DNA tests, but it certainly looks like him, and all the physical features match.”

He added: “While his face was contorted from the impact of the rounds, I did have a SEAL, who was over six foot two, lie down beside the body, and the remains were at least six foot four.”

He said there was a noticeably long pause after he made his remarks.

“So let me get this straight, Bill,” McRaven recalled Obama saying at the time. “We could afford a sixty-million-dollar helo, but we couldn’t afford a tape measure.”

“I had no comeback and I didn’t need one,” McRaven wrote. “The smile on the President’s face said it all. It had been a good night, and just for a moment we could laugh about it.”

After returning to the US, the admiral visited the Oval Office, where Obama, according to his new book, offered him not only a “heartfelt thanks for his extraordinary leadership” but also a tape measure the president had mounted to a plaque.