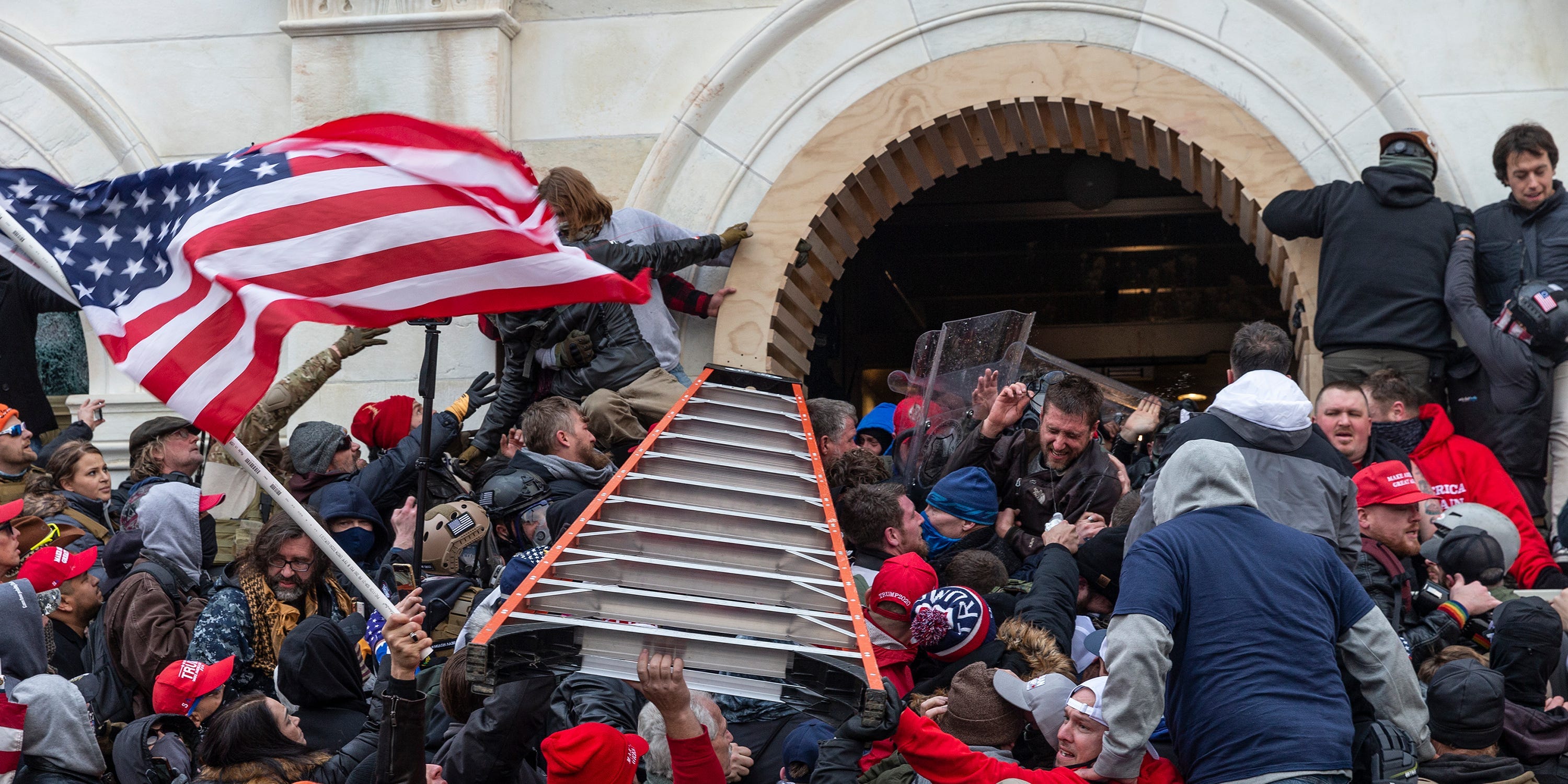 Lev Radin/Pacific Press/LightRocket via Getty ImagesRioters clash with police using a big ladder trying to enter the Capitol building through the front doors.

A man who officials say is a leader in the far-right militia group, the Oath Keepers, previously worked for the Federal Bureau of Intelligence and maintains a Top Secret security clearance, his lawyer said Monday.

Thomas Caldwell, 66, was arrested last month and charged with conspiracy related to the Capitol insurrection, after authorities said he was involved in the planning and coordinating of the January 6 attacks.

According to charging documents, the Department of Justice believes Caldwell holds a leadership role in the Oath Keepers, an anti-government group made up of current and former military officers and law-enforcement officials.

On Monday, his lawyer, Thomas Plofchan, filed a motion requesting pre-trial release on the basis of Caldwell’s numerous physical ailments from service-related injuries.

Caldwell, who has denied being a member of the Oath Keepers, is an awarded Navy veteran who has held a Top Secret security clearance since 1979, his lawyer said in new court documents.

He worked as a section chief for the FBI from 2009 to 2010, the records say. He also operated a consulting firm, performing classified work for various sects of the US Government, including the Drug Enforcement Agency, the Department of Housing and Urban Development, and the military, according to documents filed in court.

“He has been vetted and found numerous times as a person worthy of the trust of the United States government, as indicated by granting him Top Secret security clearances,” his lawyer wrote.

In addition to highlighting his past work for the government and his service-connected injuries, the defence argued Caldwell should be released because he has no prior criminal history and does not pose a danger to himself or the community.

Court documents say Caldwell is a retired lieutenant commander in the Navy and is classified as a 100% disabled veteran. Plofchan said Caldwell has been diagnosed with a disability in his right shoulder, chronic knee pain, degenerative joint disease, and PTSD, among other ailments.

“A decorated, disabled veteran who is disabled from efforts defending the country and the Constitution is unlikely to engage in the alleged conduct,” Plofchan wrote.

Members of the Oath Keepers, which has membership numbers in the tens of thousands, claim to fulfil the oath that all military and police officers take to defend the Constitution against all enemies, foreign and domestic. They believe the federal government has been co-opted by a conspiracy trying to strip Americans of their rights, charging documents say.

Caldwell, along with two other suspected members of the Oath Keepers, were charged with conspiracy, obstructing an official proceeding, destruction of government property, and unlawful entry on restricted buildings or grounds.

Caldwell has denied all charges and said his physical ailments would have prohibited him from forcing his way into the building or “storming past any barrier.”

“It is noteworthy that despite reports of 100,000 photo and video recordings of the incidents on January 6, 2021, the Government has not identified any photo or video that shows Caldwell in the US Capitol Buildingâ€¦,” Plofcan wrote.

But charging documents suggest authorities do have proof Caldwell was involved and present in the Capitol building on January 6.

Authorities say they obtained Facebook messages that indicated Caldwell played a significant role in securing lodging for fellow oath keepers for the trip and noted that other self-proclaimed oath keepers referred to Caldwell as “Commander.”

On the evening of January 6, Caldwell reportedly started a Facebook Live video that appears to have been taken from inside the Capitol building. Later that day, Caldwell sent a Facebook message reading, “Us storming the castle…I am such an instigator!”

Minutes later authorities said he sent another message: “Proud boys scuffled with the cops and drove them inside to hide. Breached the doors. One guy made it all the way to the house floor, another to Pelosi’s office. A good time.”

Later, he sent a message suggesting the rioters should attack the government at the local level, according to charging documents.

“Lets storm the capitol in Ohio. Tell me when!” he wrote, according to the charging documents.


European spies can stop holding back secrets from the US after Biden called for end to Trump’s briefings, sources say

During the siege, Oath Keepers discussed where specific lawmakers were located, according to an affidavit included in court filings obtained by the George Washington University Program on Extremism.

The FBI said Caldwell received a message during the attack that said: “all members are in the tunnels under the capital. Seal them in turn on gas.”

In the release request, the defence argued that the government was “prematurely” relying on alleged photos and social media content that have not been “vetted for accuracy.”