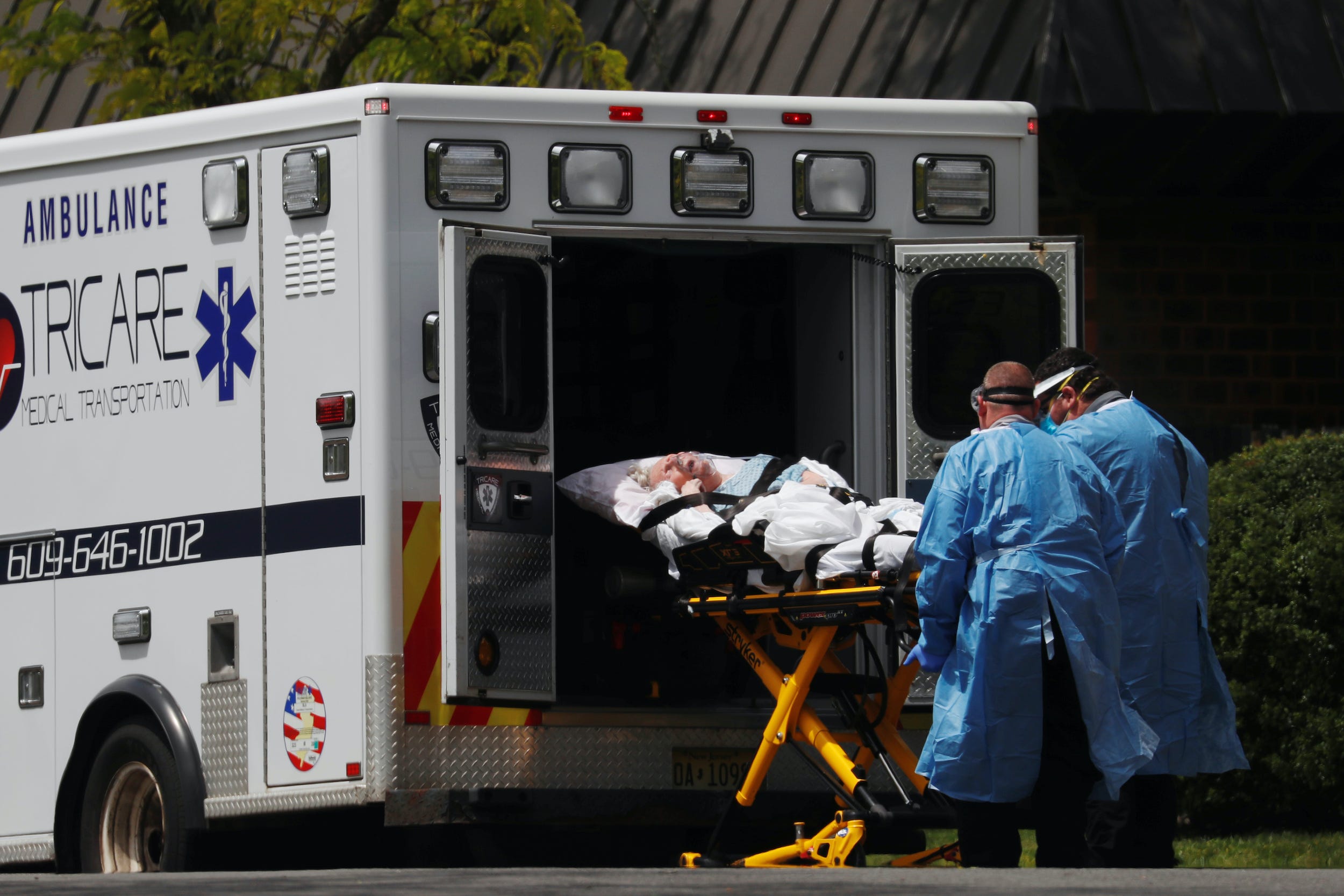 Lucas Jackson/ReutersNursing homes serve the most vulnerable segments of society.

A man at Kingston Healthcare Centre in California fell off his bed, naked, and hit his head on the ground, according to a Medicare document. He “experienced vomiting, sleepiness, elevated blood pressure and heart rate, and decreased level of consciousness” and was unable to recognise his wife, but employees “delayed his transfer to a higher level of care for almost 10 hours,” the report added.

And seniors who lived at the Mescalero Care Centre were subject to “abuse, fear, and intimidation” because a nursing assistant, who they’d said was “rough” and “verbally abusive,” stayed on staff at the New Mexico facility, another Medicare report said.

These are a handful of the more than 200 worst-rated nursing homes in the US that were awarded millions in coronavirus relief funds despite yearslong histories of violations.

According to a Business Insider review of data compiled by ProPublica, the Centres for Medicare and Medicaid Services (CMS), the Paycheck Protection Program, and Medicare.gov, about 220 nursing homes that have been flagged for a litany of violations benefited to the tune of millions of dollars by way of Small Business Administration Paycheck Protection Program (PPP) loans.

This lending program is part of the Coronavirus Aid, Relief, and Economic Security Act, a $US2.2 trillion bill that was passed by Congress in March in response to the pandemic’s blow to the economy. In all, nursing homes cited by CMS’s Special Focus Facility (SFF) Program, as well as hospitals and business entities that own and/or manage those facilities received $US149 million to $US427 million.*

“If Chrysler provided nonfunctioning cars to the federal government, people would demand that the government not pay for them. But for some reason, we hand out billions to poorly performing nursing homes with no accountability whatsoever,” Alex Lawson, the executive director of advocacy group Social Security Works, told Business Insider.

Nursing homes serve the most vulnerable segments of society, which makes a yearslong history of violations particularly egregious, Brian Lee, the executive director of Families for Better Care, said. Lee said in some cases, poor quality of care has transformed nursing homes into coronavirus “killing fields.”

“The downplaying of infection-control infractions and the ‘look-the-other-way’ staffing enforcement exacerbated the invasion of COVID-19 into nursing homes,” Lee said. 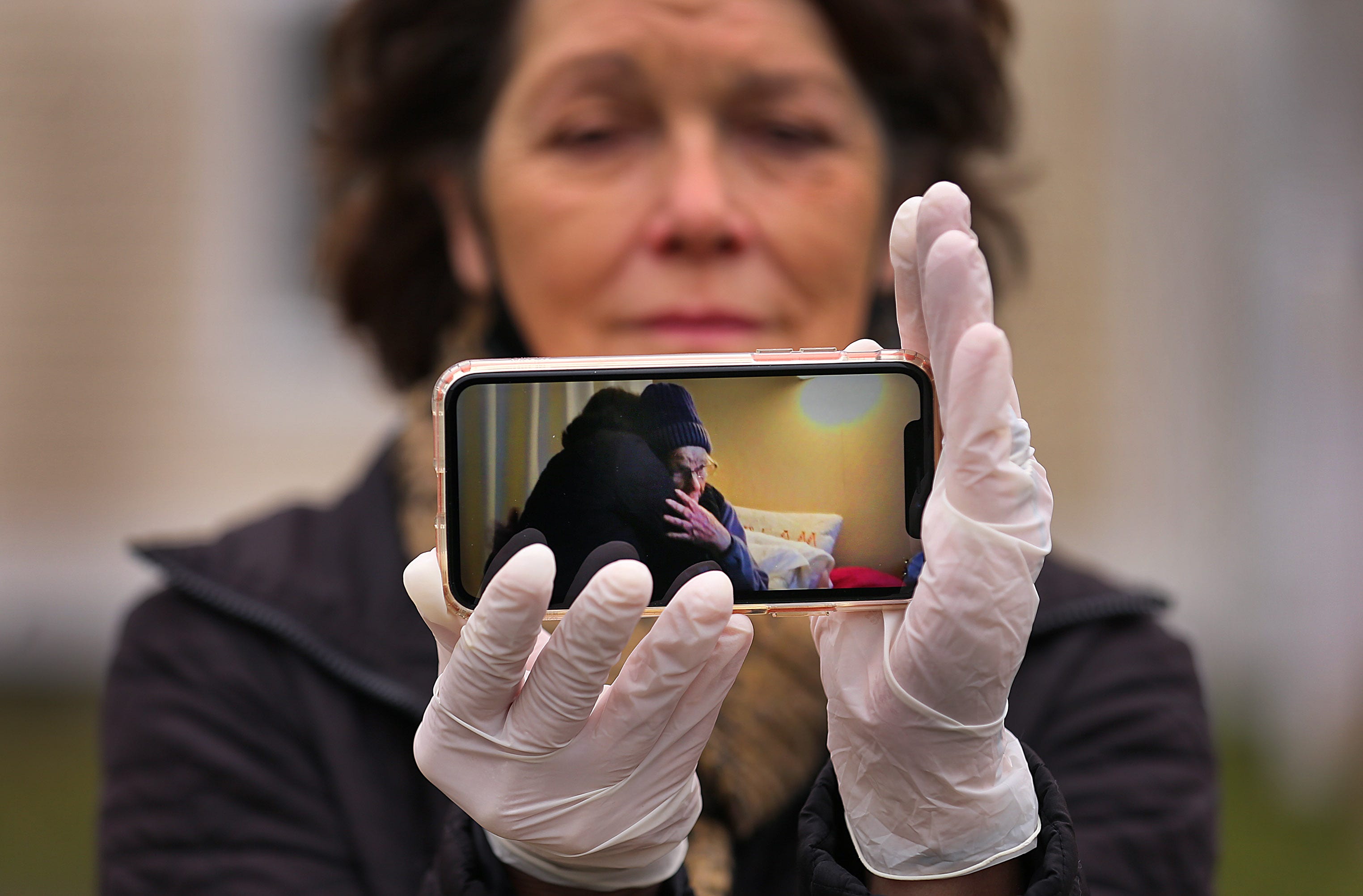 John Tlumacki/The Boston Globe via Getty ImagesA woman shows a picture of her hugging her mum at a nursing home on April 4.

As of Monday, the US has recorded over 5.4 million coronavirus cases and more than 170,000 deaths from the disease, according to data compiled by Johns Hopkins University.

Though the coronavirus has affected people of all ages, it is particularly dangerous for those over 65 with preexisting health conditions.

About 402,000 residents and employees have tested positive for coronavirus at long-term-care facilities – about 8% of the national caseload – and at least 68,000 people have died from the virus, about 41% of US fatalities, The New York Times reported.

CMS, which is part of the Department of Health and Human Services, conducts regular inspections of Medicare- and Medicaid-certified nursing homes to “determine if they are providing the quality of care” that these programs find necessary for the “health and safety” of residents, its website says.

Deficiencies result in citations and can land these nursing homes in the Special Focus Facility Program.

SFF-designated facilities have “more problems” – in both quantity and severity – than other nursing homes, as well as “a pattern of serious problems that has persisted over a long period of time,” according to the SFF website.

Reports of the nursing homes on the SFF list depict nightmarish scenes.

Fifteen health citations have been levied against Commander Nursing Centre, which has been fined over $US288,000 in the past three years, according to Medicare.gov. It still managed to rake in between $US1 million and $US2 million in PPP loans.

Reports said residents lost weight because of unmet nutritional needs and weren’t protected from sexual abuse. An inspector spoke with a woman who “sat in a wet brief with a puddle under her chair,” while “staff failed to provide incontinent care” to another resident for nine hours, a report said.

Meanwhile, Kingston Healthcare Centre has been cited 39 times and fined more than $US11,600. 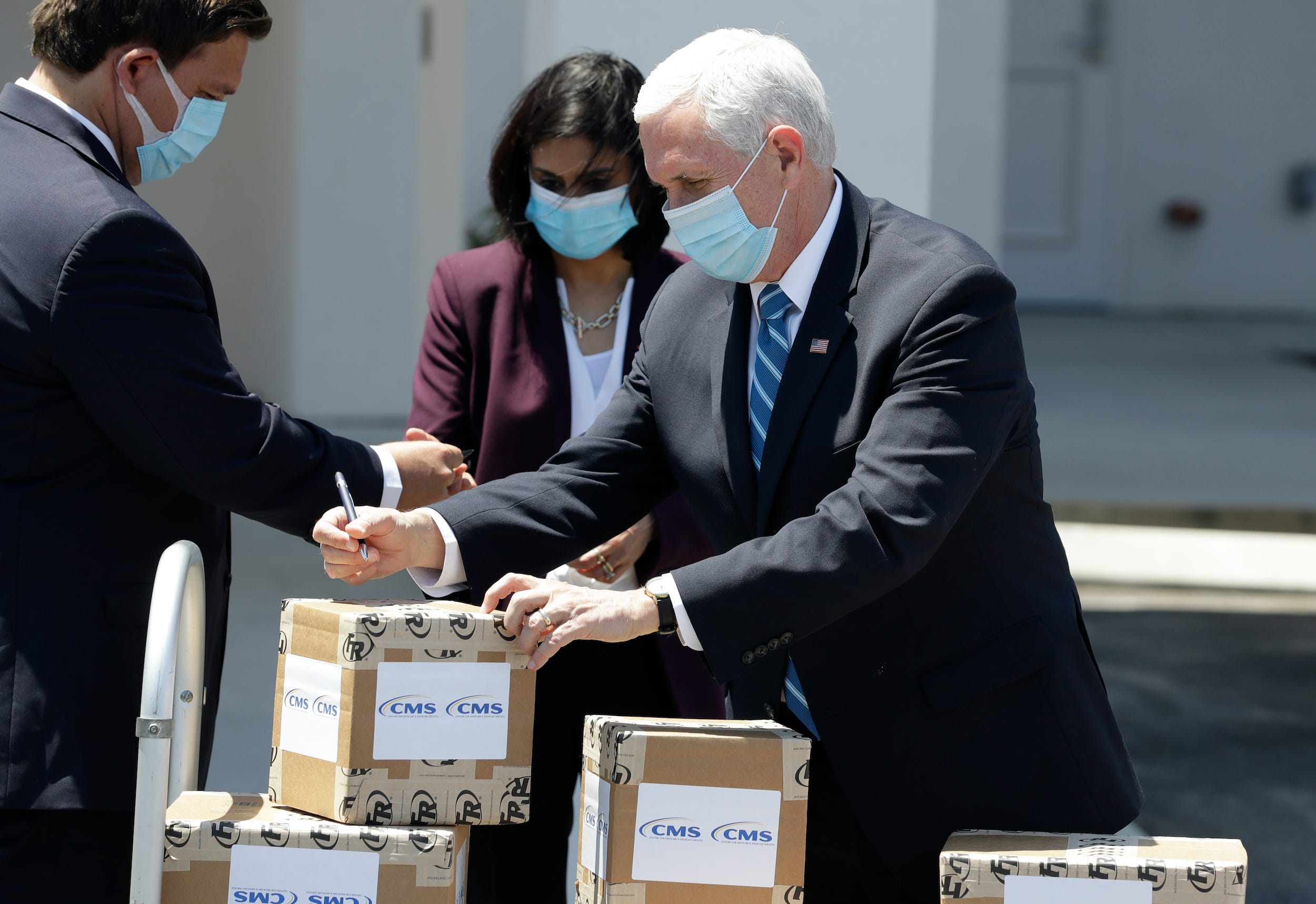 Chris O’Meara/AP PhotoVice President Mike Pence with Seema Verma, the administrator of the Centres for Medicare and Medicaid, and Florida Gov. Ron DeSantis.

Reports described a lack of care plans to protect residents from infections, along with mould and leaks in the building. In one case, staff didn’t document or report a resident’s repeated attempts to get up without assistance despite being a “high fall risk.” Ultimately, “this failure resulted in a fall with a major injury and death,” according to an inspector.

Even so, Kingston was awarded between $US1 million and $US2 million in PPP loans.

A similar situation played out at Mescalero Care Centre, which has been cited 30 times and fined about $US169,000. It received a PPP loan between $US350,000 and $US1 million.

Inspectors reported inadequate dental services, physical therapy, and ulcer-prevention measures, while nurse notes indicated that surveyed residents who were receiving hospice care were bathed only about once a week. It’s unclear if the notes reflect a substandard care plan or if they’re incomplete.

Kingston and Commander did not immediately respond to Business Insider’s requests for comment, and Mescalero had declined to comment.

Experts who talked to Business Insider about this issue were split on whether there should be a “standard of care” requirement when federal money is on the line.

“The CARES Act rewarded lots of companies, not all of which had a great track record of good behaviour. If you want to get $US2 trillion out the door, having a litmus test of being ‘worthy’ would have increased bureaucratic barriers and ended up eliminating a lot of companies from being recipients,” Vincent Mor, a professor at the Brown University School of Public Health, said.

“Any rapid emergency effort like that needs to be as simple as possible to meet its stated goal of keeping small businesses afloat. If you started overlaying industry-specific rules of this type, it would be hopelessly complicated,” he said. 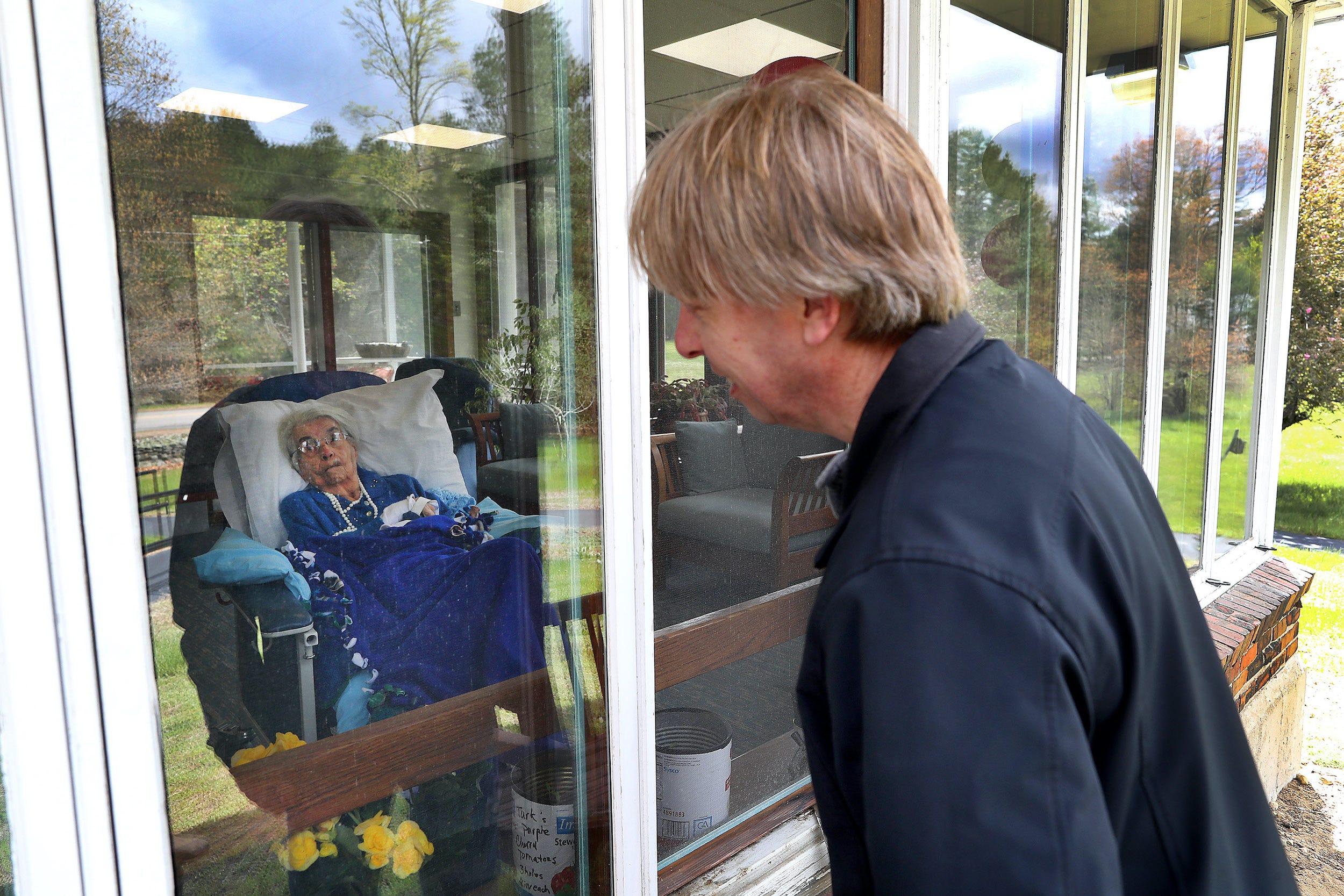 John Tlumacki/The Boston Globe via Getty ImagesA man talks to his mother through a window at a nursing home on May 9.

David Grabowski, a professor of healthcare policy at Harvard Medical School, expressed concern that such demands could result in the closure of already struggling nursing homes.

“Without relief funds, these facilities will close or provide substandard care,” he said. “That is not fair or humane to the individuals living at these facilities or the staff working there.”

Grabowski, though a proponent of supporting such homes, added that it was necessary to “hold them accountable for using relief funds on direct care.”

However, Danielle Brian, the executive director of the Project on Government Oversight, criticised the ease with which “institutions with histories of violations” received loans.

“I realise there was a premium on getting the money out quickly, but modern banking technology surely could have done far better than it did,” she said.

The government needs to crack down harder on nursing homes, some experts say

CMS released a statement on Friday touting the fact that it has collected about $US15 million in fines from nursing homes found to be in “noncompliance with infection control requirements and the failure to report coronavirus.”

But Lee said that’s not enough.

“Good or bad, rain or shine, abuse or neglect, nursing homes still get paid. So the threat of nominal enforcement is something operators have grown to comfortably live with because at the end of the day, they will still get paid regardless of the quality,” he said.

For nursing homes to become safer for residents, Lee said leaders needed “ratchet up fines and prosecute for neglect more often,” adding, “If that happened, care would begin to incrementally improve.” 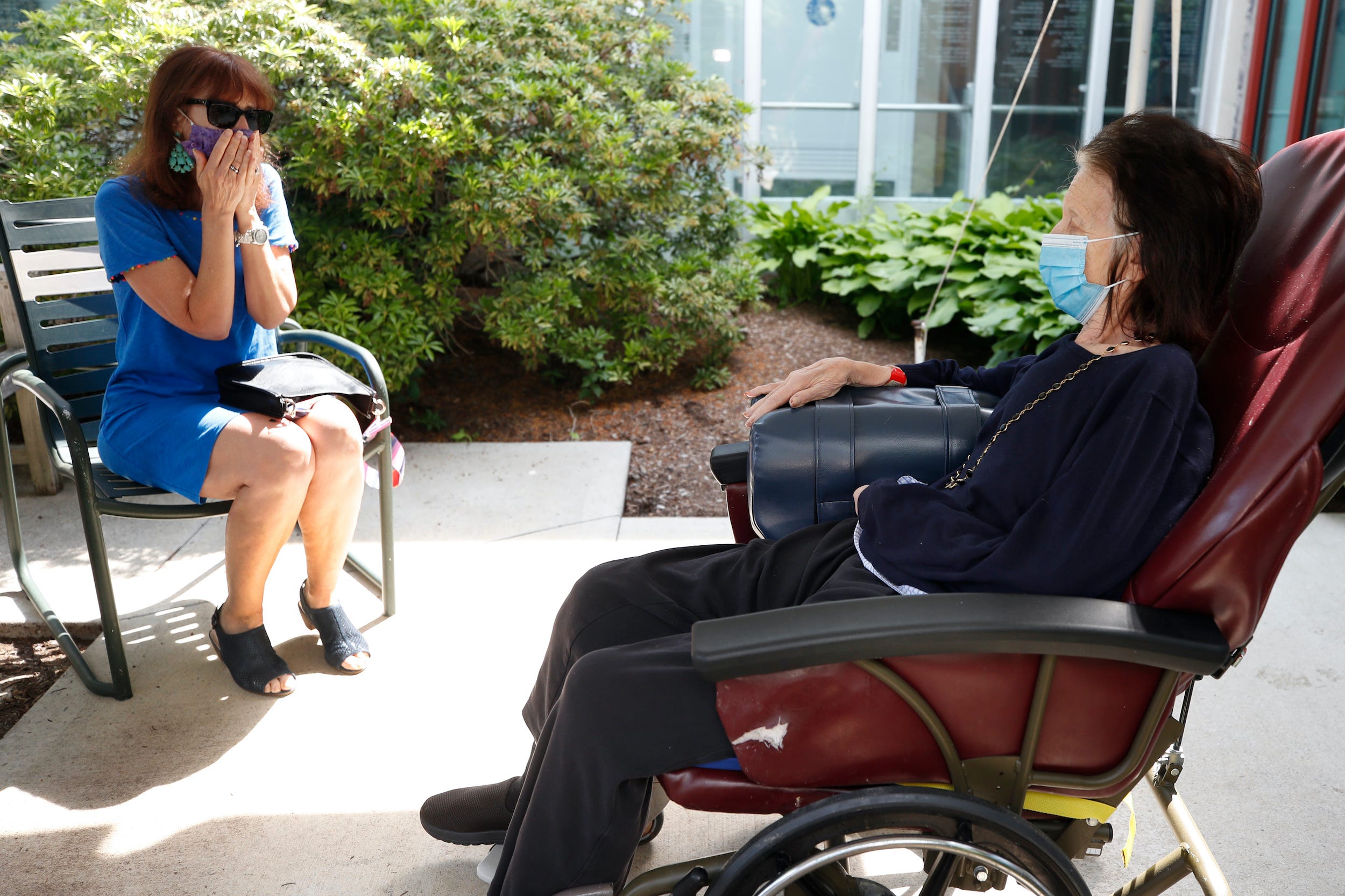 Elise Amendola/AP PhotoA woman talks to her mother outdoors at a rehabilitation centre on June 10.

To Lawson, deficient long-term care is not only a human-rights violation but also a signal that the US isn’t “serious about stemming the tide of the pandemic.”

“That needs to change,” he said.

When Lee was asked which lessons nursing homes should learn, he said it was more important for us as a nation to smarten up to whether such facilities should exist at all.

“Nursing homes are a dinosaur that COVID-19 will make extinct – and it should,” he said.

To that, Taylor added: “COVID-19 has not created problems in the long-term-care industry; it has exposed ones that preexisted.”

*Editor’s note: At the time of publishing, the program released only ranges of awards, not specific award amounts for PPP loans over $US150,000. This story takes only those loans into account.