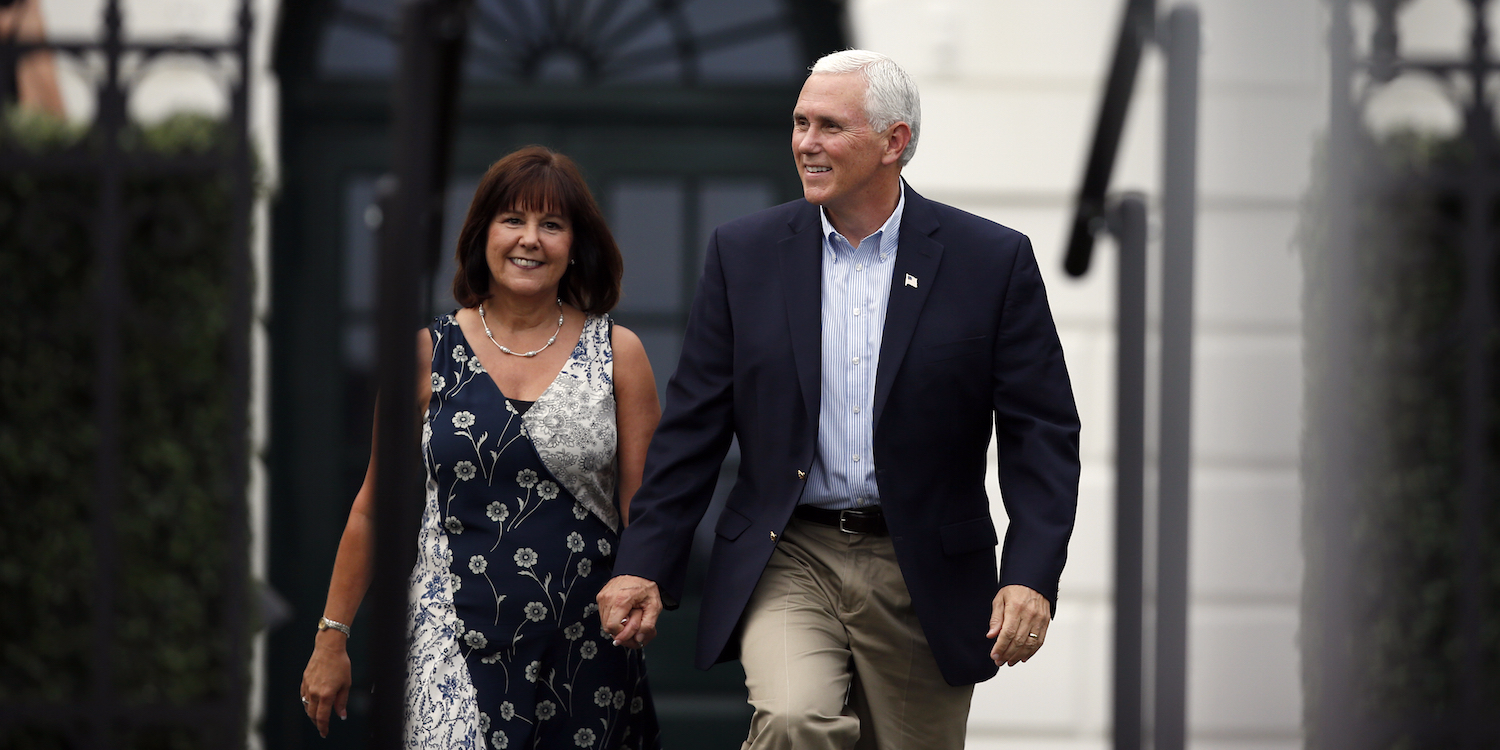 Everyone knows that the president of the United States lives in the White House, but far fewer know that the office of the vice president comes with an official residence of its own.

Number One Observatory Circle, located on the grounds of the US Naval Observatory in Washington, DC, has been the official residence of the vice president since 1974. Vice President Mike Pence and his family currently live in the private complex. Walter Mondale, who served as the vice president under Jimmy Carter, was the first VP to call it home in 1977.

Here’s a look inside the historic residence.

The private residence at Number One Observatory Circle was built in 1893. It’s just 2.5 miles from the White House, but feels worlds away. 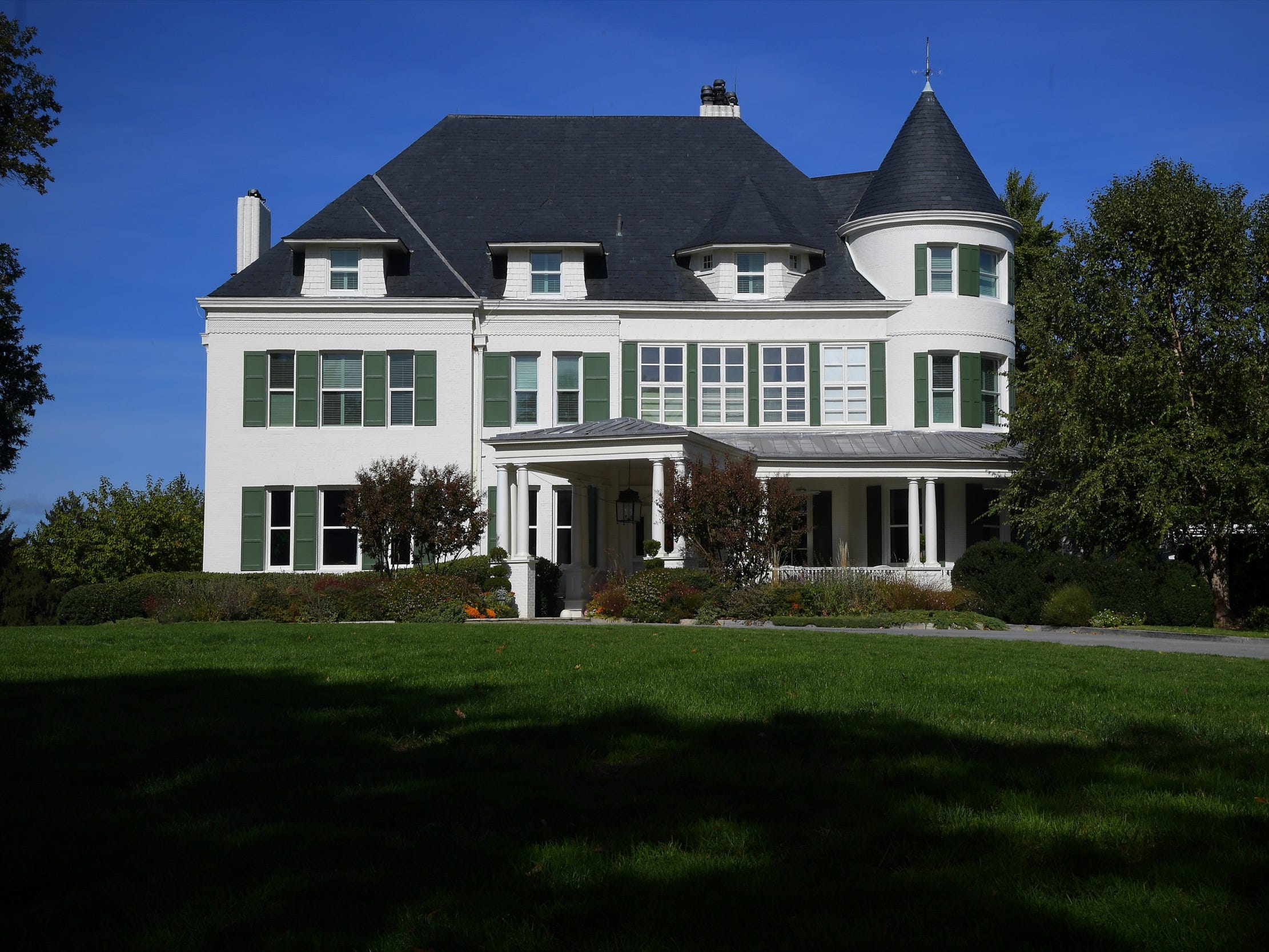 Katherine Frey/The Washington Post via Getty ImagesNumber One Observatory Circle, the official residence of the vice president of the United States since 1974, is pictured on October 28, 2016.

It is located on the grounds of the US Naval Observatory, where scientists study the sun, moon, and stars for navigational purposes. 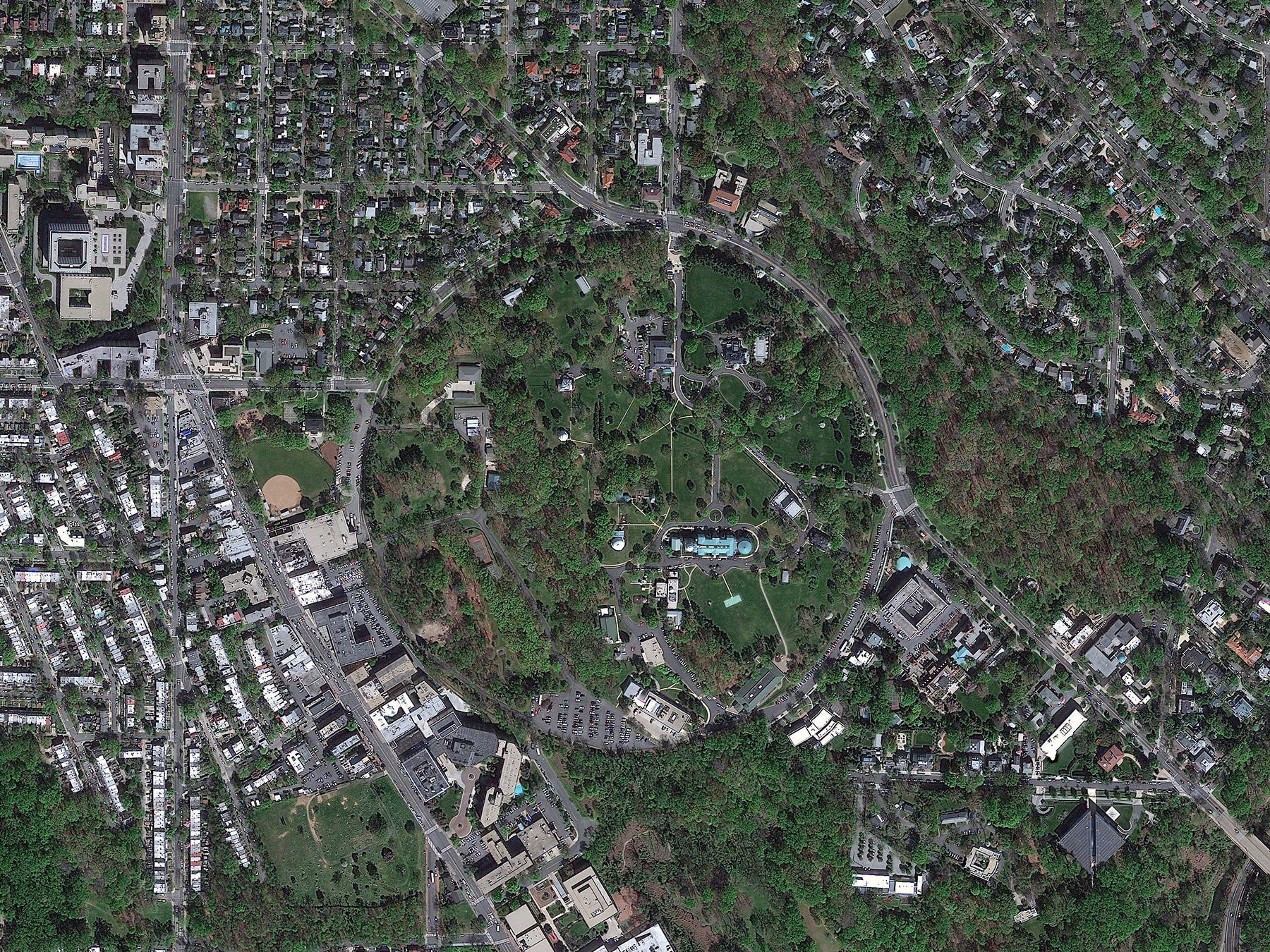 DigitalGlobe/Getty ImagesA satellite image captured April 2, 2012, shows the US Naval Observatory, which is located within the traffic circle.

For 30 years, it served as the home of the superintendent of the US Naval Observatory. Then in 1923, it became the official residence for the head of the Navy. Charles Dharapak/APUS Secret Service personnel close the gates to the Observatory in 2013.

In 1974, Congress designated the house as the home of the vice president.

National Archives Catalogue/Jimmy Carter Library (LP-JC)Jimmy and Rosalynn Carter gather with Walter and Joan Mondale for dinner at the vice president’s residence in 1977.

But the first vice president didn’t move in until three years later, when Walter Mondale was elected second-in-command under President Jimmy Carter. 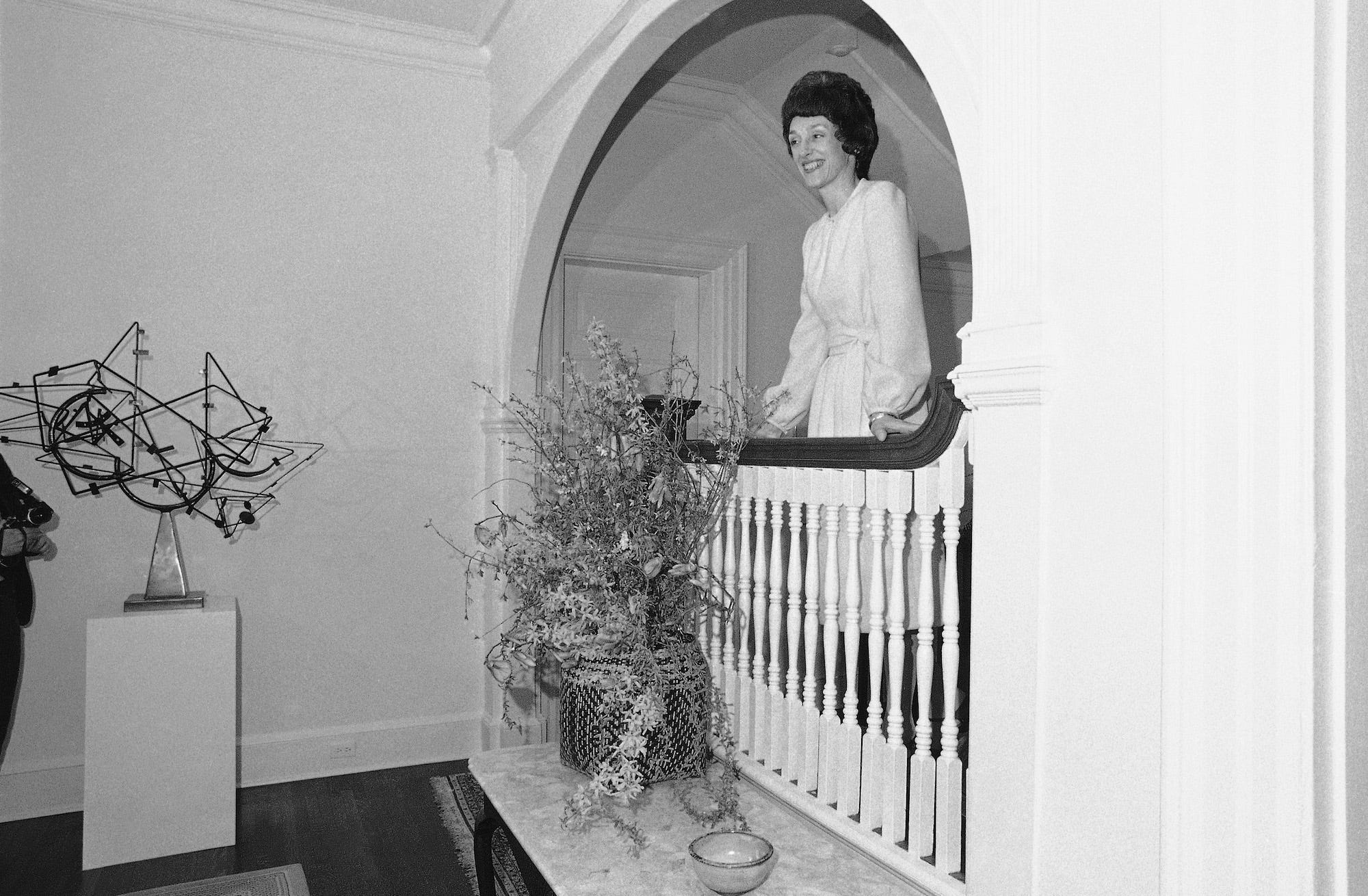 APJoan Mondale poses on the Juliet balcony overlooking the reception hall during a tour for members of the media on March 23, 1977.

On the second floor is the master suite, another bedroom, a study, and a den. The attic used to be servants’ quarters, but now has four bedrooms for children. The main kitchen is in the basement. 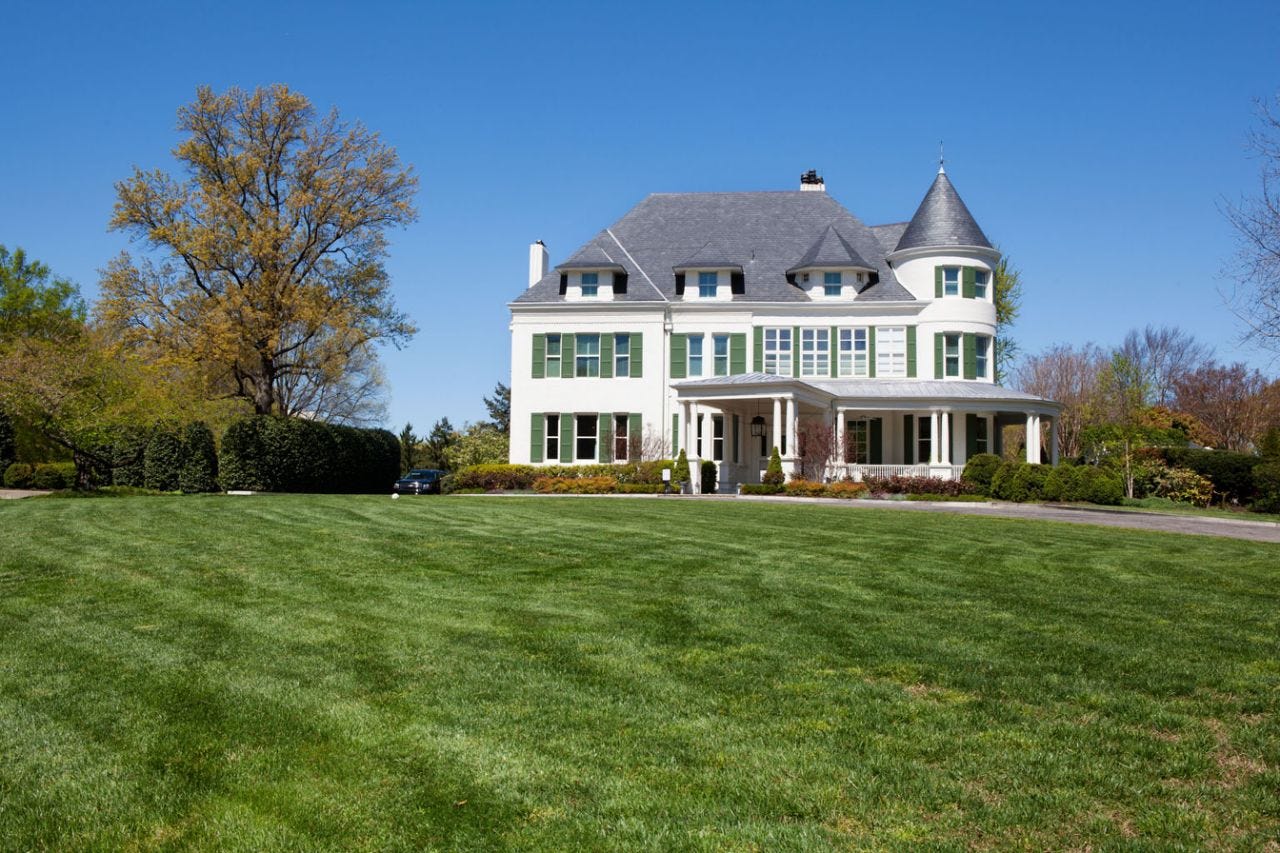 Every vice president has lived there since Mondale, bringing their own unique touch to the home’s 9,150 square feet. 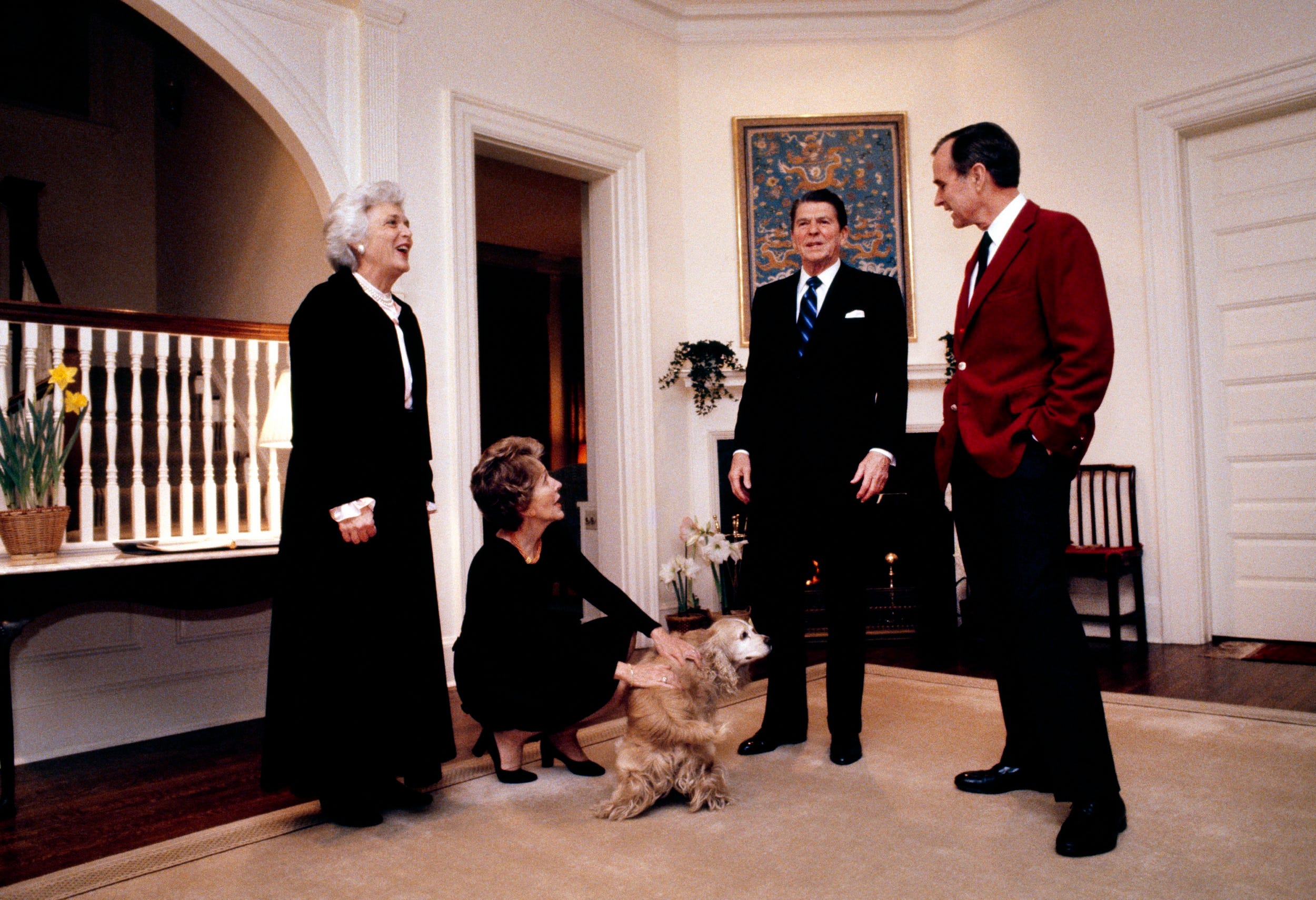 “It really changed from one administration to another,” Charles Denyer, a historian and author of a book about the residence, told USA Today in November 2017. 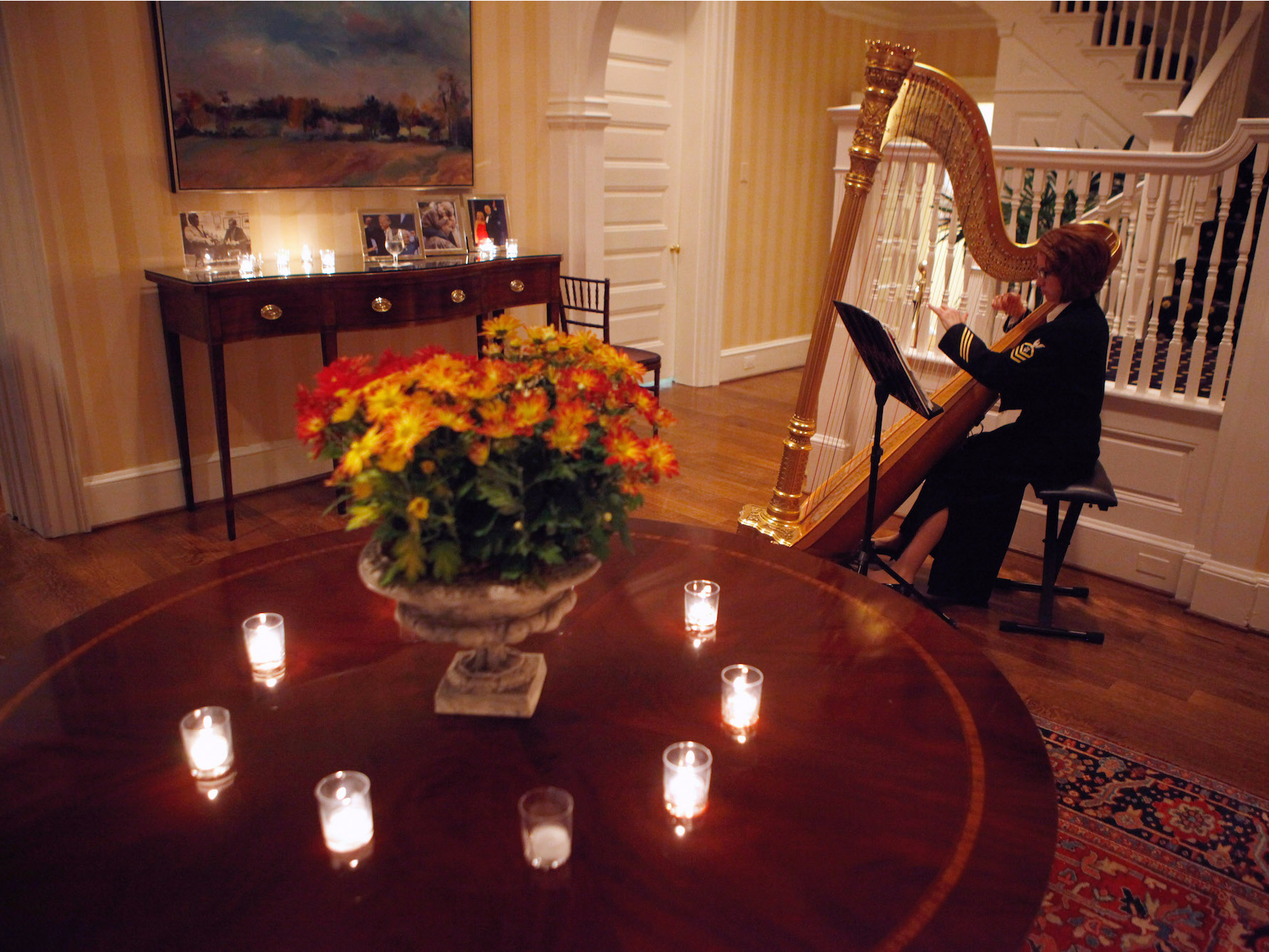 Chip Somodevilla/GettyA military harpist plays music during a Thanksgiving dinner hosted by Joe Biden and his wife, Jill, on November 22, 2010.

George H.W. Bush installed a horseshoe pit on the grounds when he was vice president. 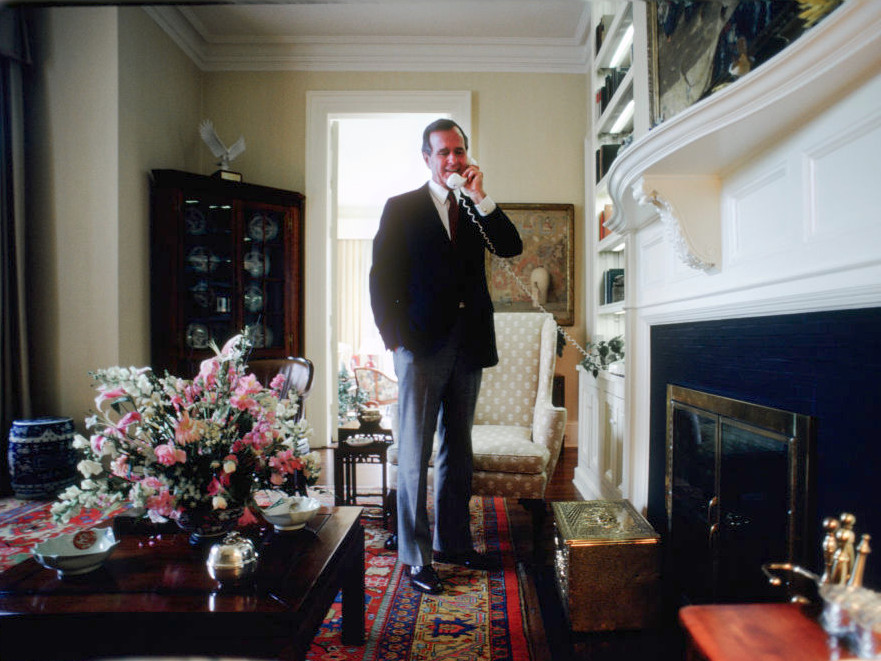 David Hume Kennerly/GettyGeorge H.W. Bush answers a phone call in the residence circa 1983.

When Dick Cheney and his family moved in, they decorated the home using a neutral colour scheme of creams and greens. 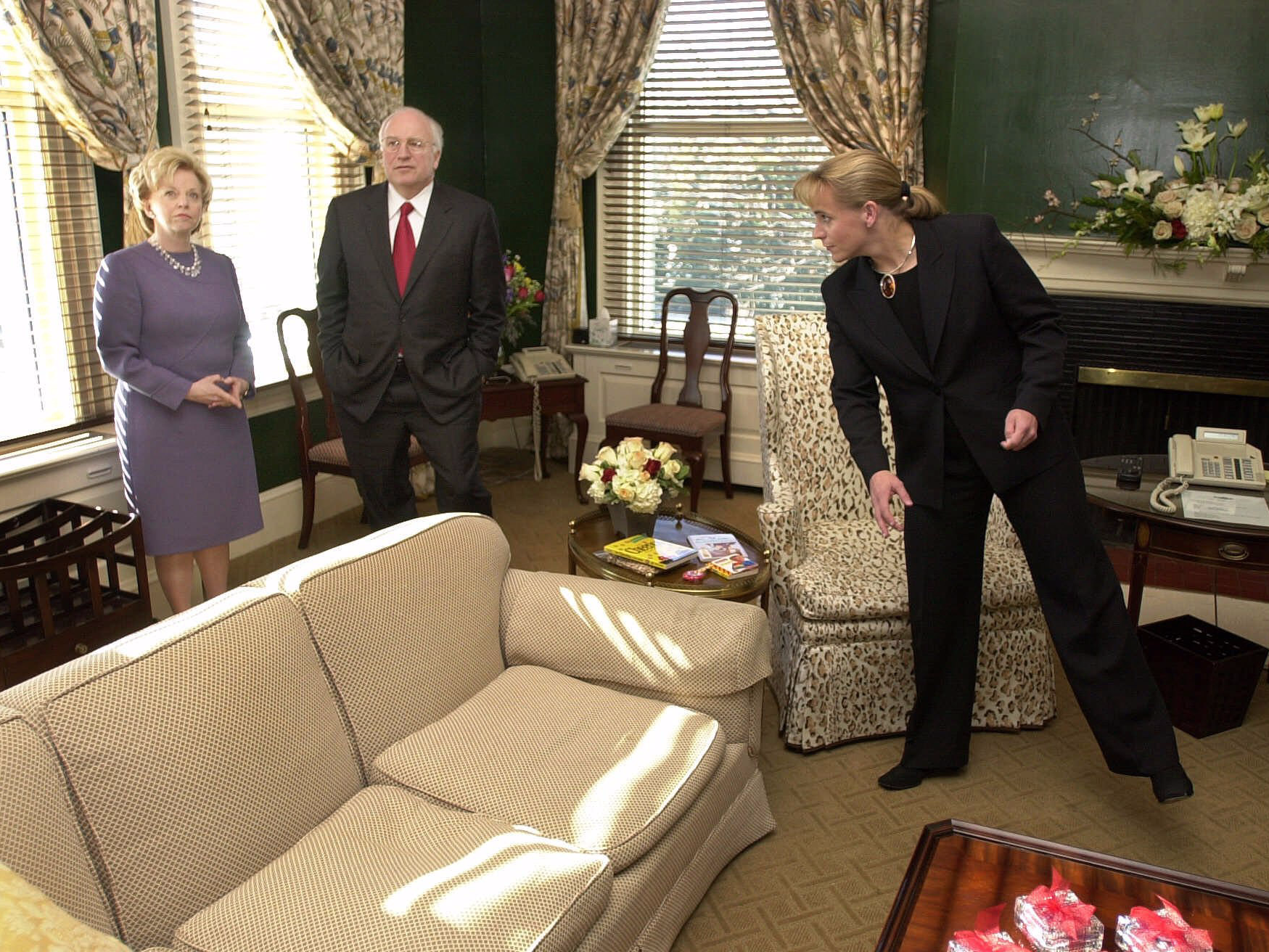 M. Spencer Green/APDick Cheney, his wife Lynne, and their daughter Mary, move into their new home in 2001.

People can donate to the Vice President’s Residence Foundation, a non-profit organisation created in 1991, to help pay for decorating expenses. 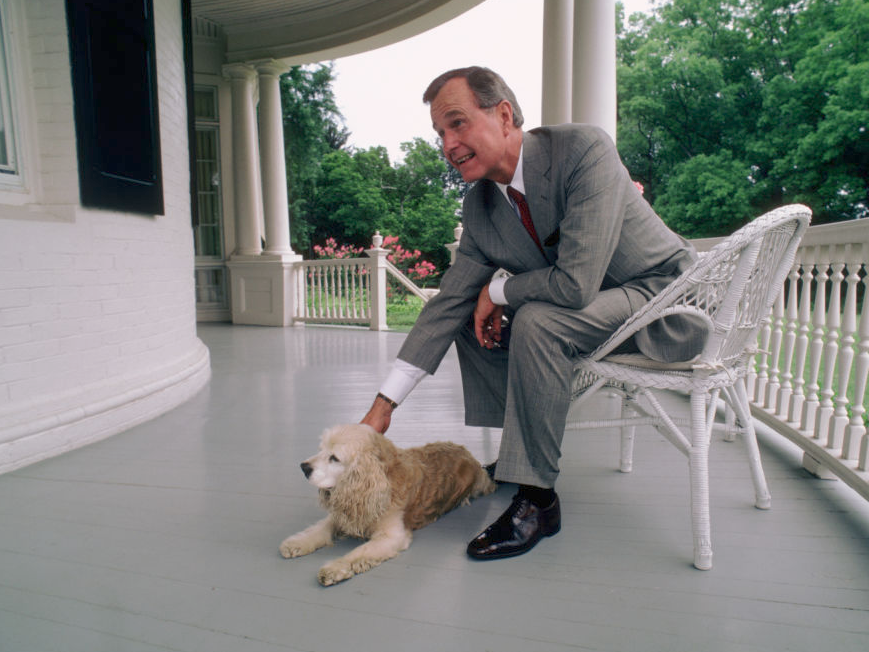 Source: The Centre for Public Integrity

When Al Gore’s family lived there, lacrosse sticks and drumsticks were reportedly always lying around. 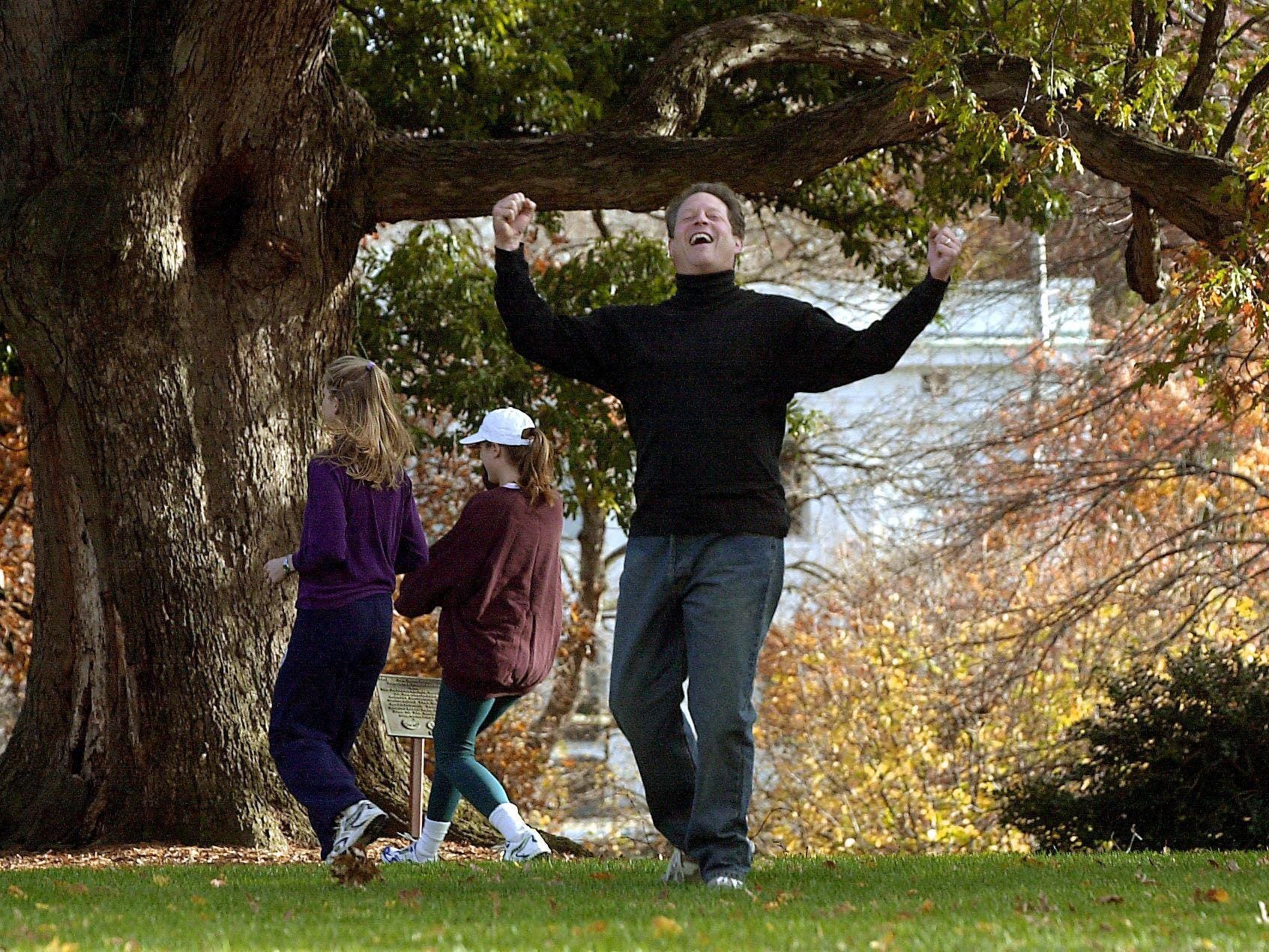 JOYCE NALTCHAYAN/AFP via Getty ImagesAl Gore celebrates scoring a touchdown as his daughters walk away during a touch football game with family members in November 2000 at the vice president’s residence.

The house features Queen Anne-style architecture, and an expansive porch that wraps around the front corner. 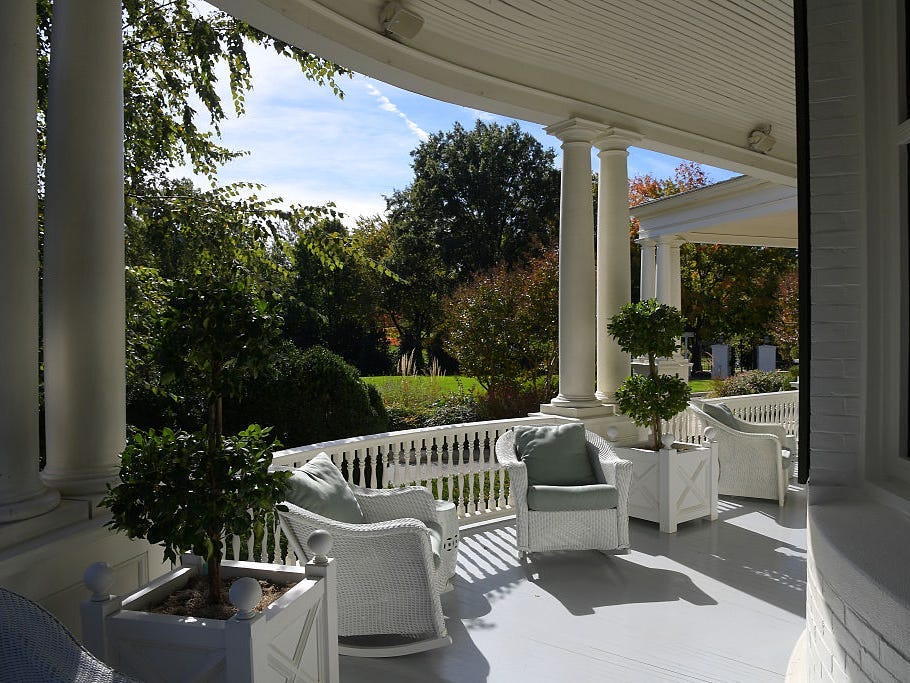 Dan Quayle added a swimming pool and exercise room during his tenure. In 2010, Joe Biden told reporters that Quayle was his “favourite vice president” because he helped build the pool. 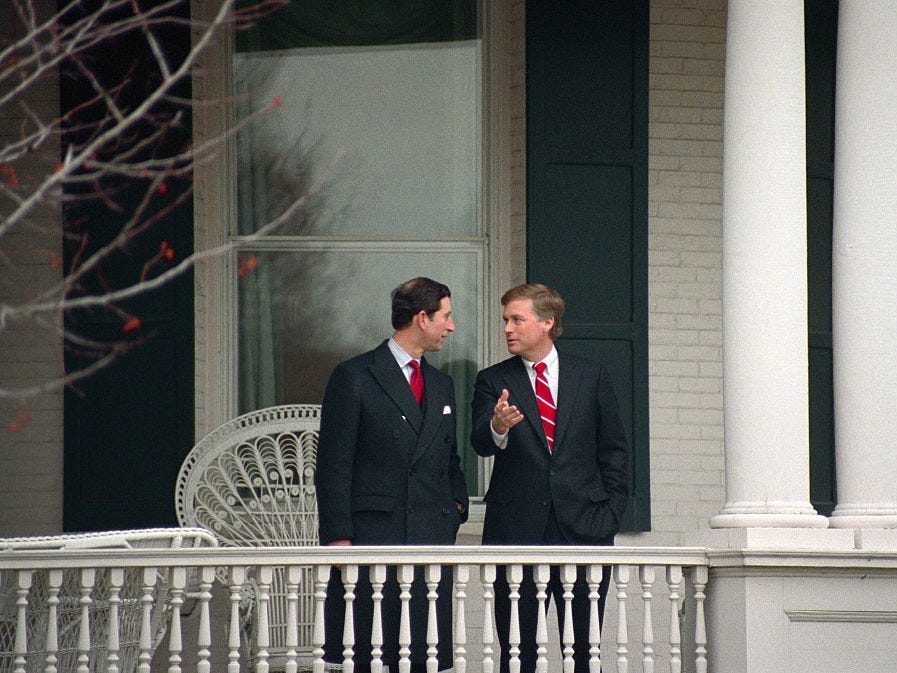 Jill Biden, Joe’s wife, was also grateful for past additions. “Each person has added something to make the home better for the next family,” she told The Washington Post in 2017. 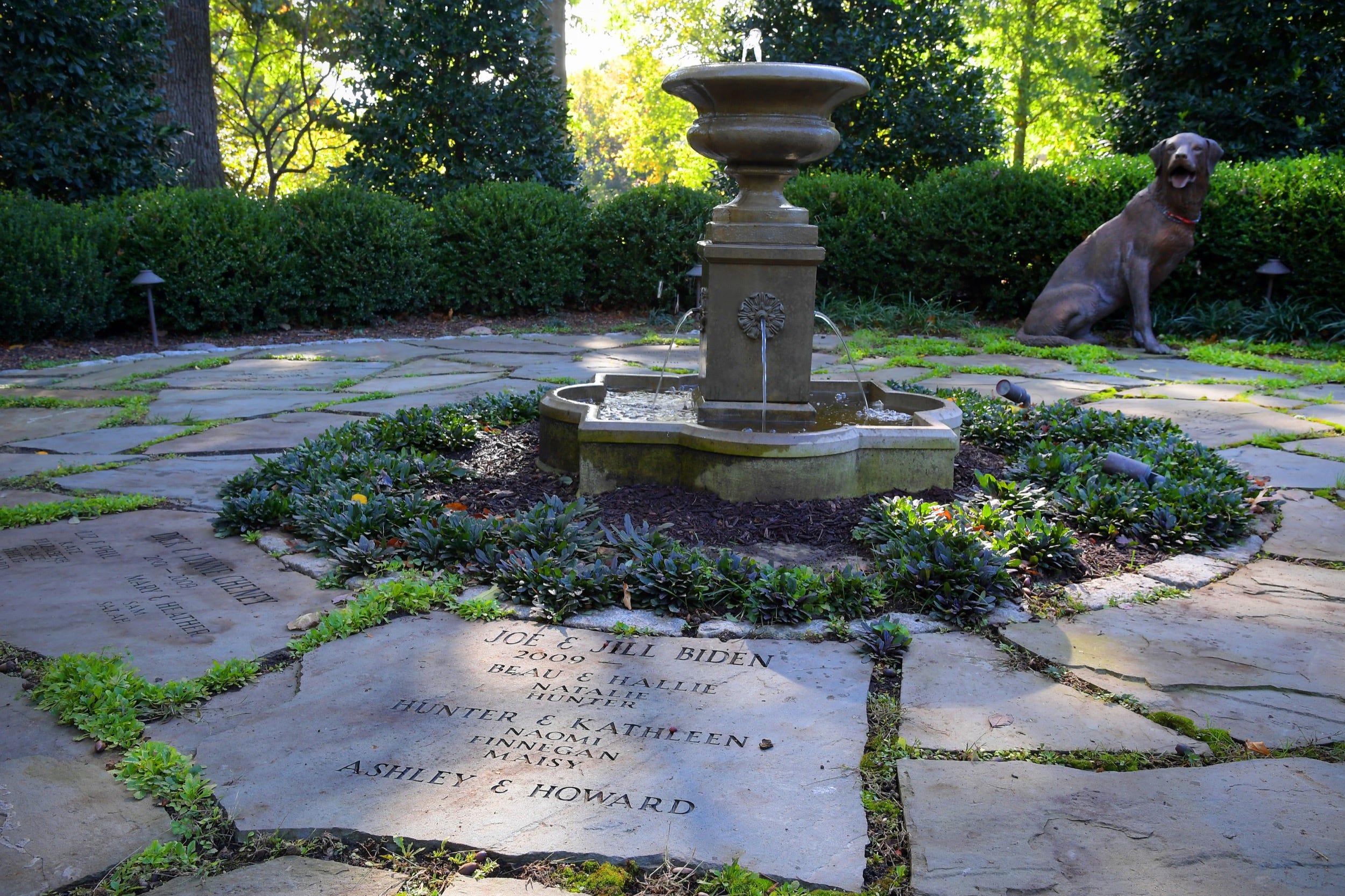 Katherine Frey/The Washington Post via Getty ImagesJill Biden helped create the Family Heritage Garden of the Vice President where all occupants and their family members, including pets, are memorialised on the stone pavers around a fountain. Pictured October 2016.

She was also especially fond of the “serenity” of the place. “When times get tough, and there were some pretty tough times for the Bidens, you could sit outside and reflect. It was very healing,” Jill Biden told the Post. 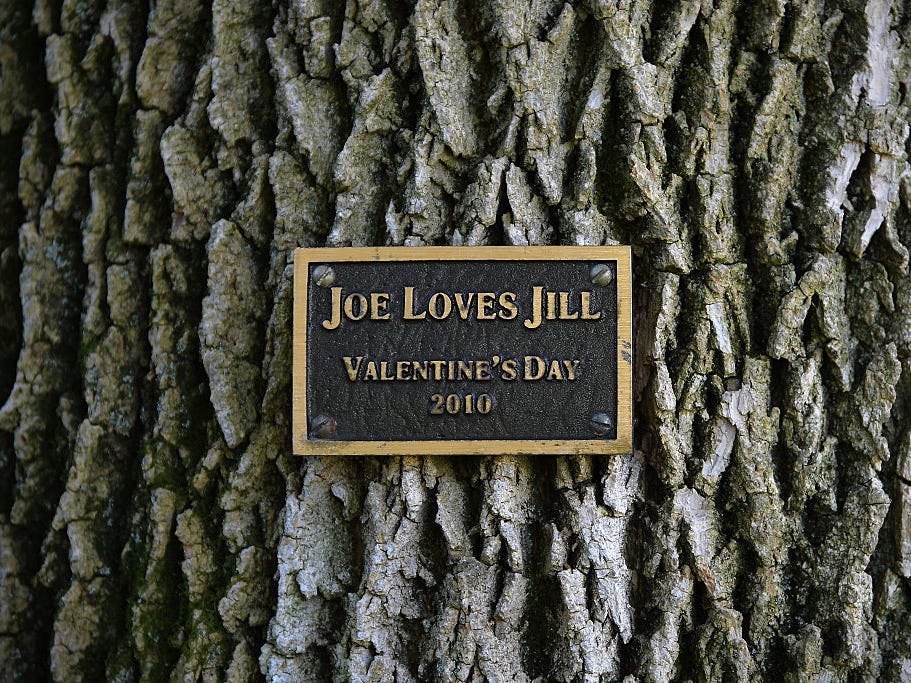 Katherine Frey/The Washington Post via Getty ImagesJoe Biden surprised Jill with a commemorative plaque on a tree on the grounds of the vice president’s residence on Valentine’s Day in 2010.

Numerous leaders and dignitaries have been to the residence over the years. For eight years in a row, Biden hosted Ireland’s Prime Minister Enda Kenny on St. Patrick’s Day. 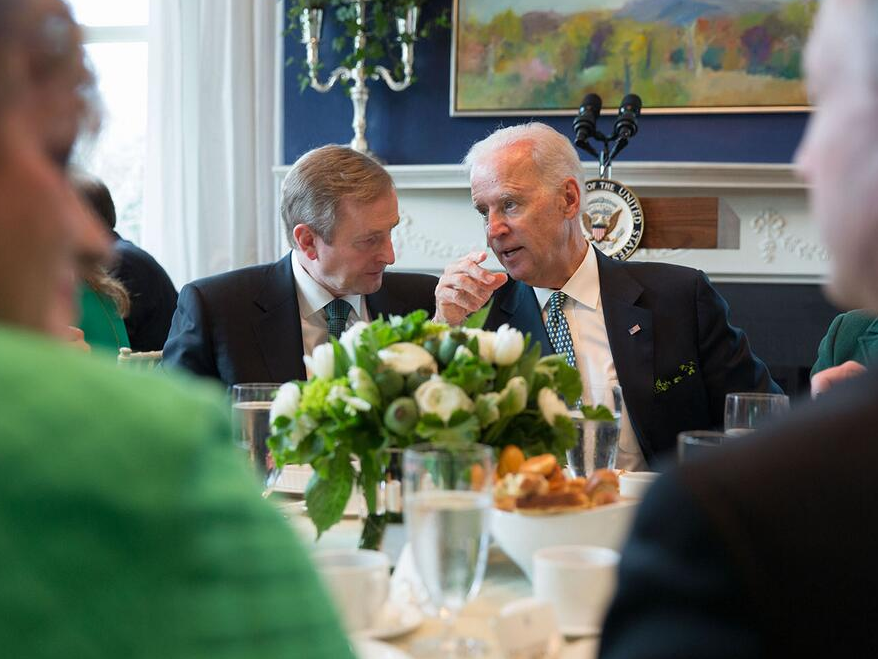 Before moving out, Jill Biden told the Post that the Pences would likely be surprised to find that the Observatory is a respite from the “hectic” nature of Washington life. 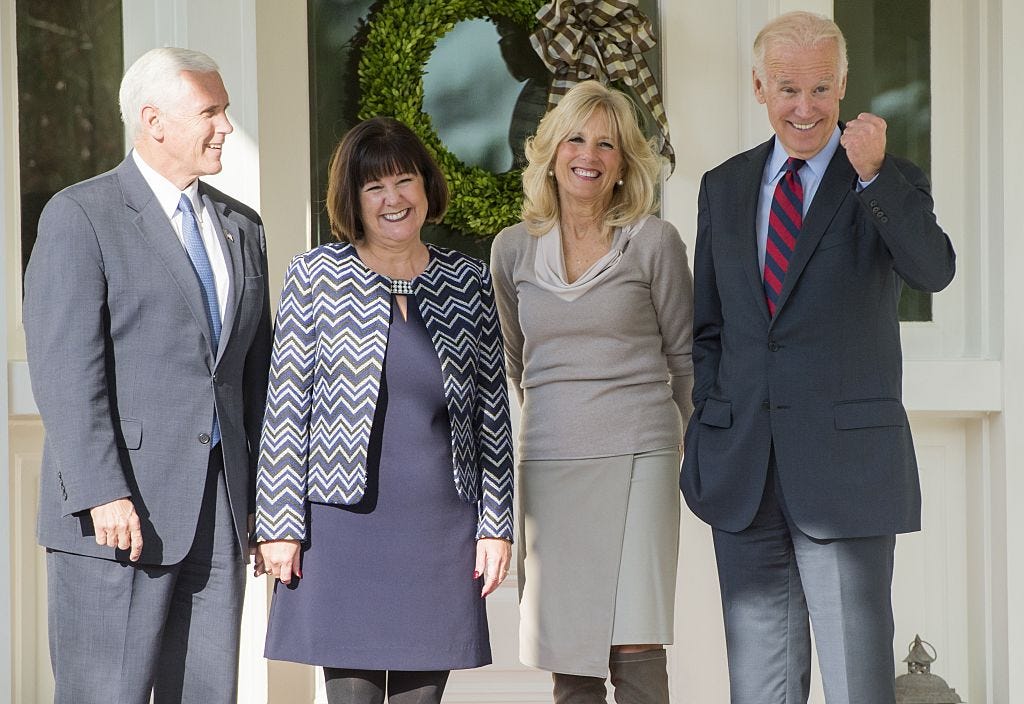 SAUL LOEB/AFP via Getty ImagesJoe and Bill Biden meet with Mike and Karen Pence following lunch at the vice president’s residence on November 16, 2016.

The Pences have lived in the Observatory since January 2017. After moving in, they posed for Inauguration Day photos on the front porch. 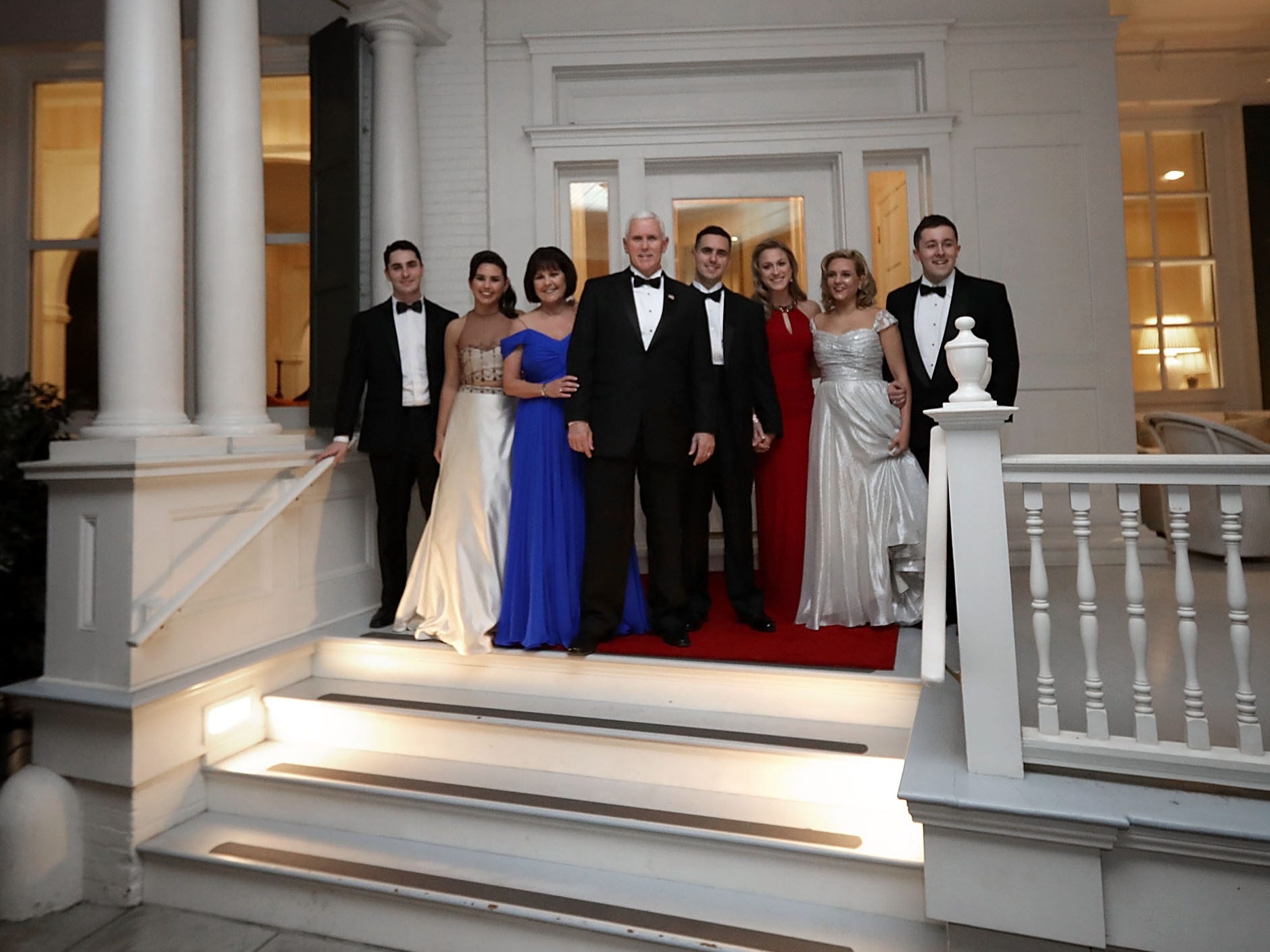 Chip Somodevilla/GettyMike Pence and his family pose for photographs on the front porch of the vice president’s residence on January 20, 2017.

Just like the White House, the Observatory gets all decked out for the holidays. The Pences have posed for official Christmas portraits, like the one here, in what appears to be the home’s sitting room. 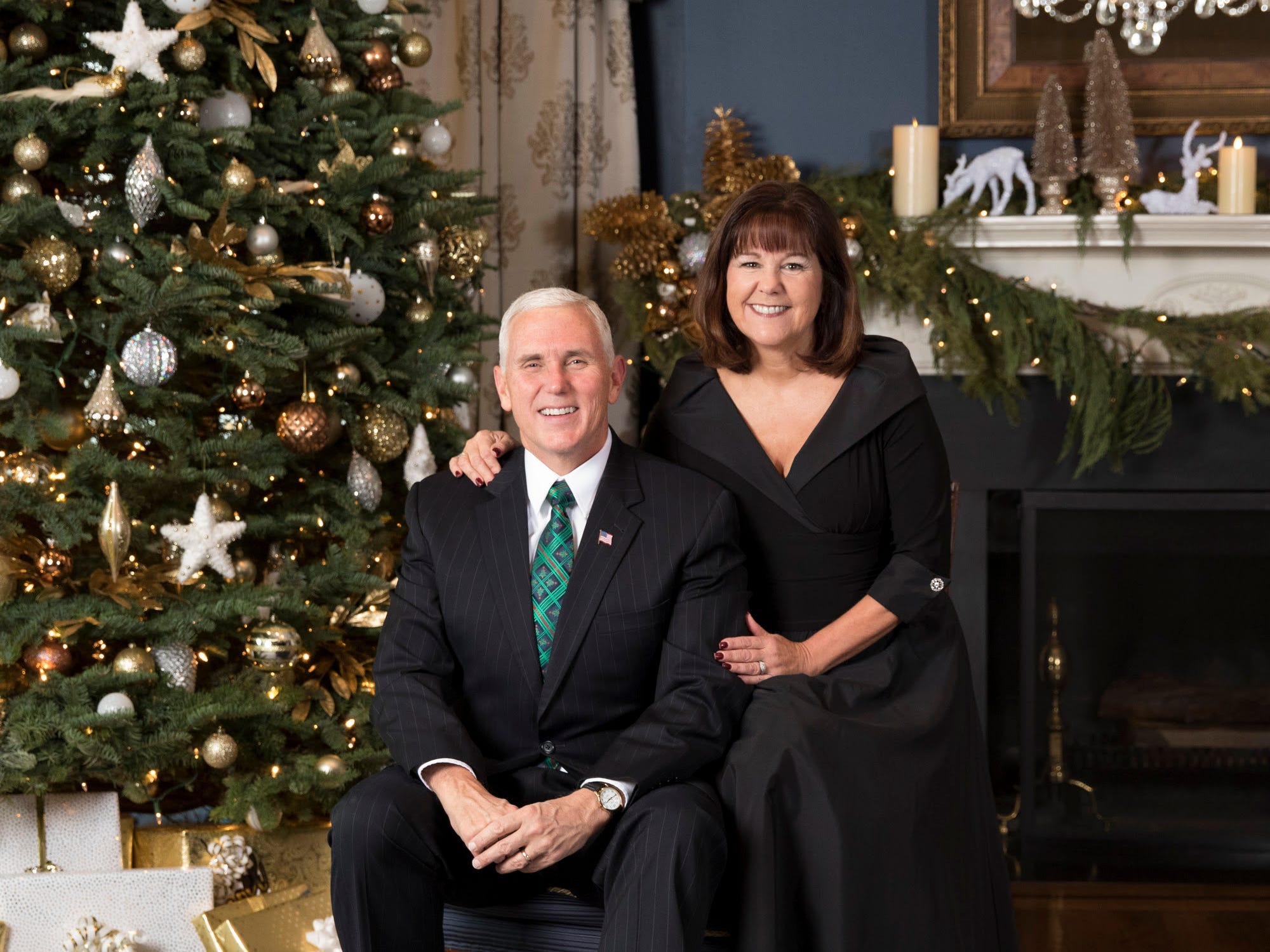 Official White House Photo by Myles CullenMike and Karen Pence are pictured on December 9, 2017, in their official Christmas portrait at the vice president’s residence.

The Pences have also gone all out for Halloween, decorating the home and greeting trick-or-treaters there. 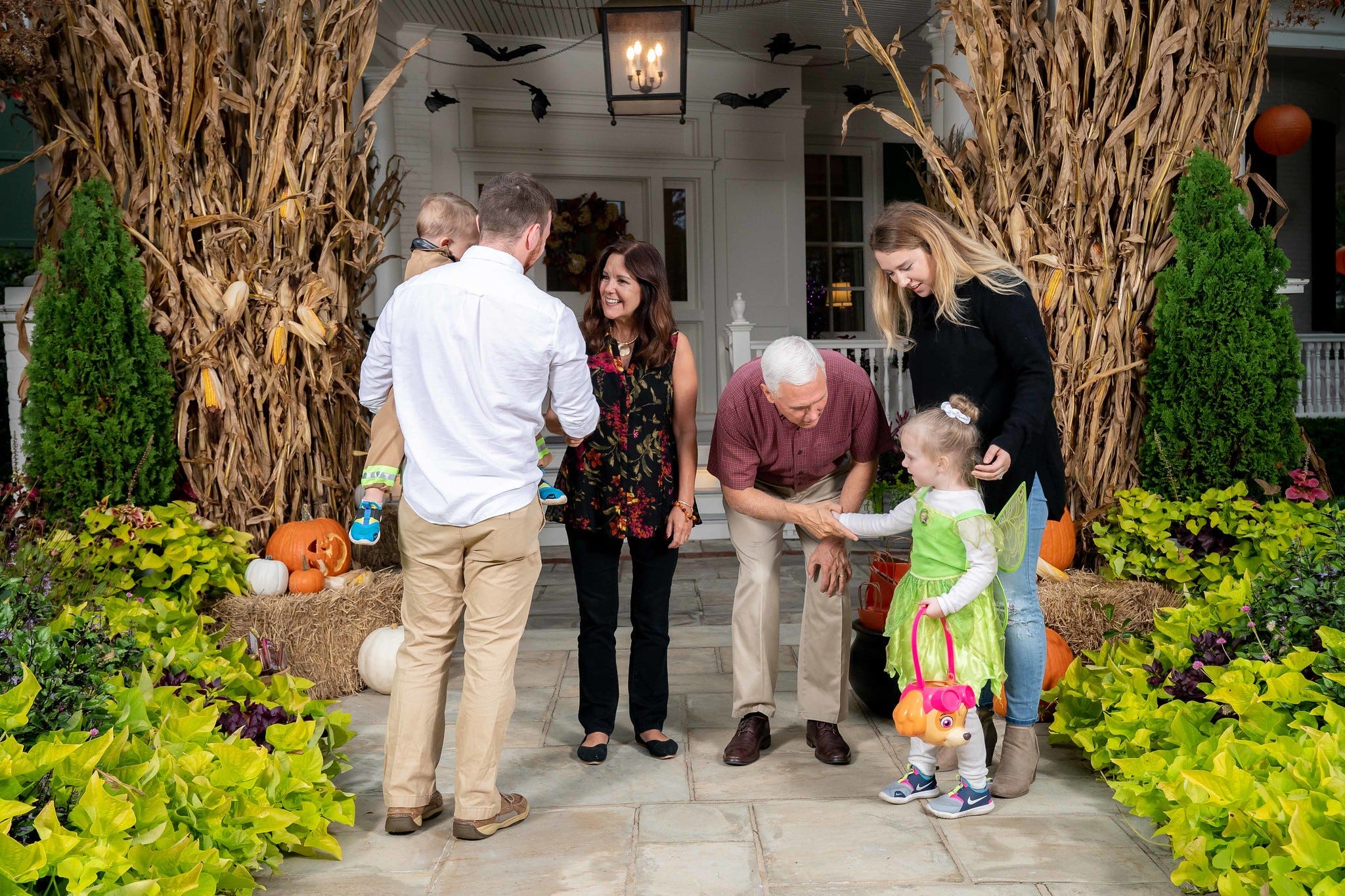 Like their predecessors, the Pences have hosted a broad range of guests, including politicians and world leaders. 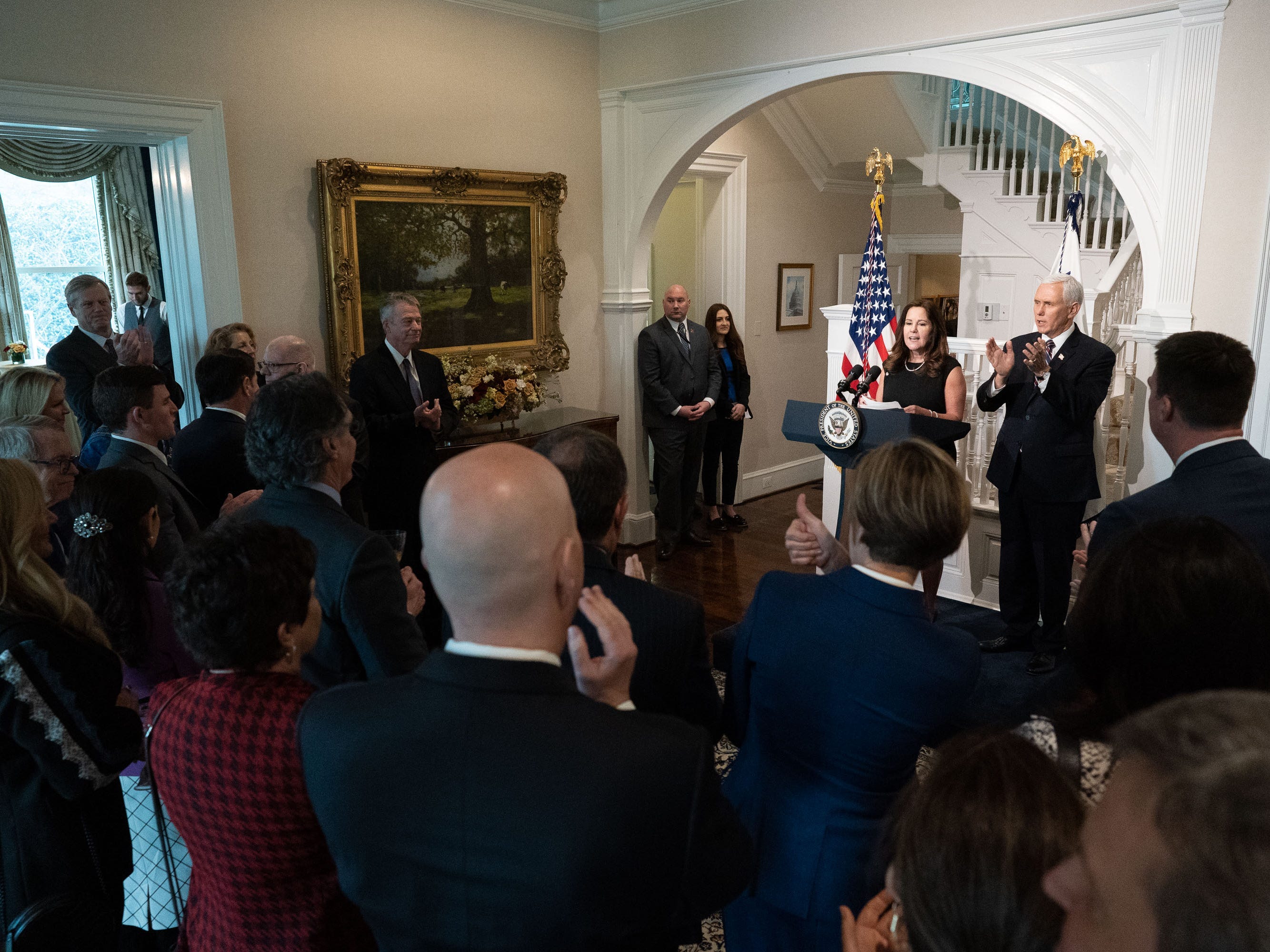 Official White House Photo by D. Myles CullenMike and Karen Pence speak with governors and guests on February 7, 2020, at the vice president’s residence.

In June 2017, US Department of Agriculture Secretary Sonny Perdue joined Karen Pence to unveil the addition of bee hives to the grounds. 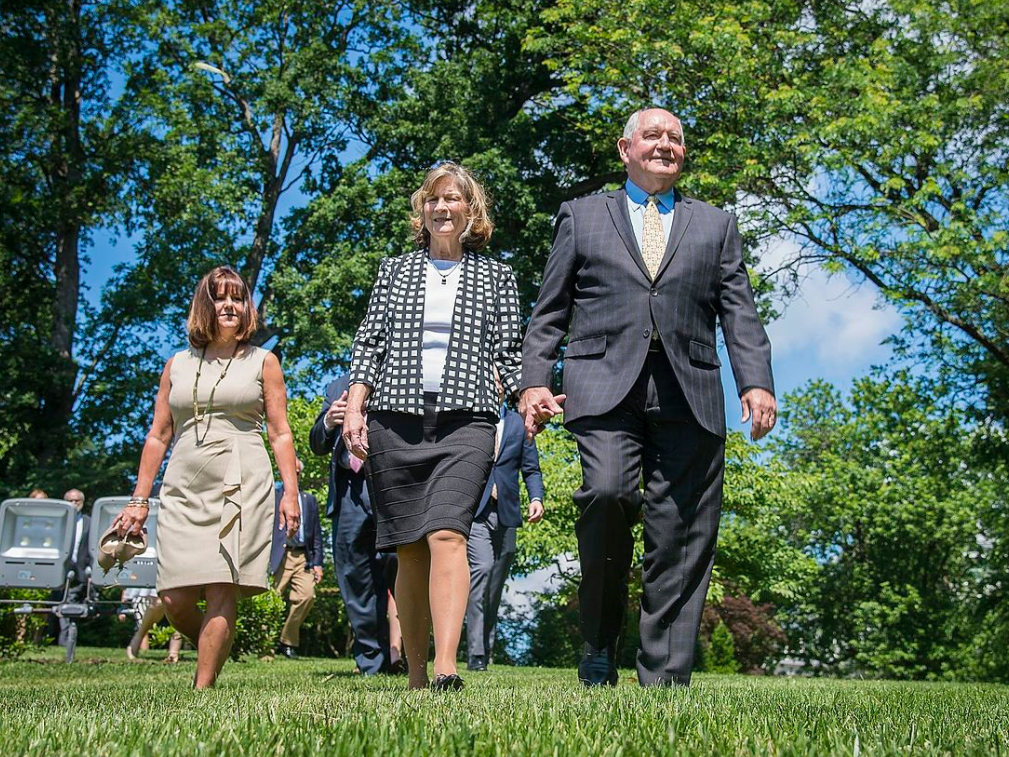 US Department of AgricultureSonny Perdue and his wife Mary joined Karen Pence for a walk on the grounds in June 2017.

Source: US Department of Agriculture

Karen Pence, who declared art therapy as her official cause as second lady, has hosted events for US soldiers suffering from PTSD. 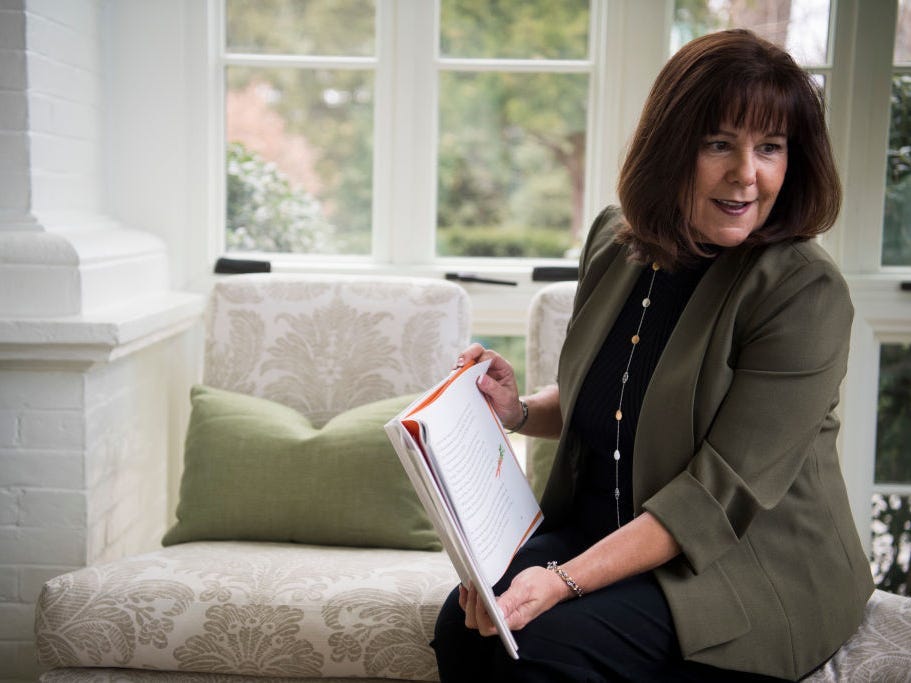 Carolyn Van Houten/The Washington Post via Getty ImagesKaren Pence talks about her illustrated children’s book ‘Marlon Bundo’s Day in the Life of the Vice President’ at the vice president’s residence on March 9, 2018.

A piece of Indiana at the VP Residence! Douglas David delivered a beautiful painting of his artwork. The peony is the IN state flower. Thx u pic.twitter.com/a641kPHJbx

The Pences also host an annual pool party for veterans. 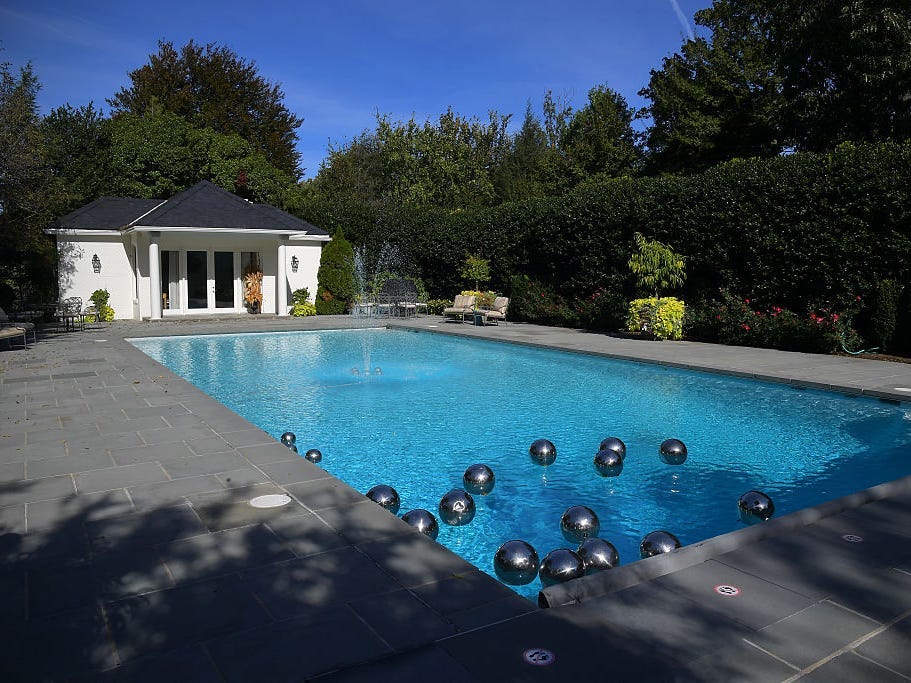 Katherine Frey/The Washington Post via Getty ImagesThe Quayle family had the pool, pictured here in October 2016, installed when they lived at the vice president’s residence.

.@Mike_Pence and I enjoyed hosting #MilitaryFamilies at the @VP Residence for our annual pool party! Military families make great sacrifices to serve our Nation and we enjoyed a fun and safe evening to show our appreciation.???????? pic.twitter.com/dMhfONeKG2

But the public rarely gets the chance to see the property for themselves. There are no public tours and the house is hidden from the street. “If you don’t know about it, it’s not there,” historian Denyer said. 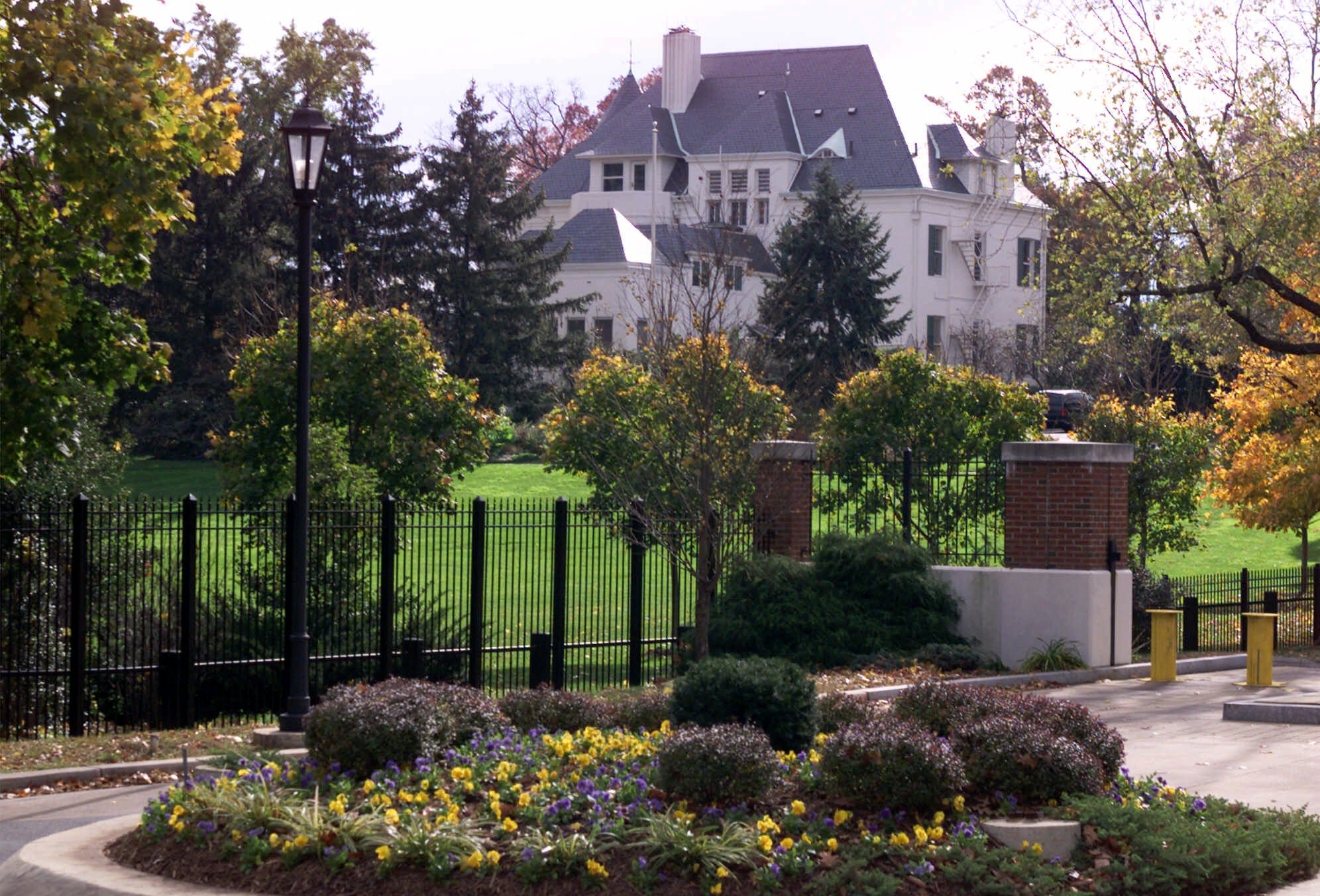