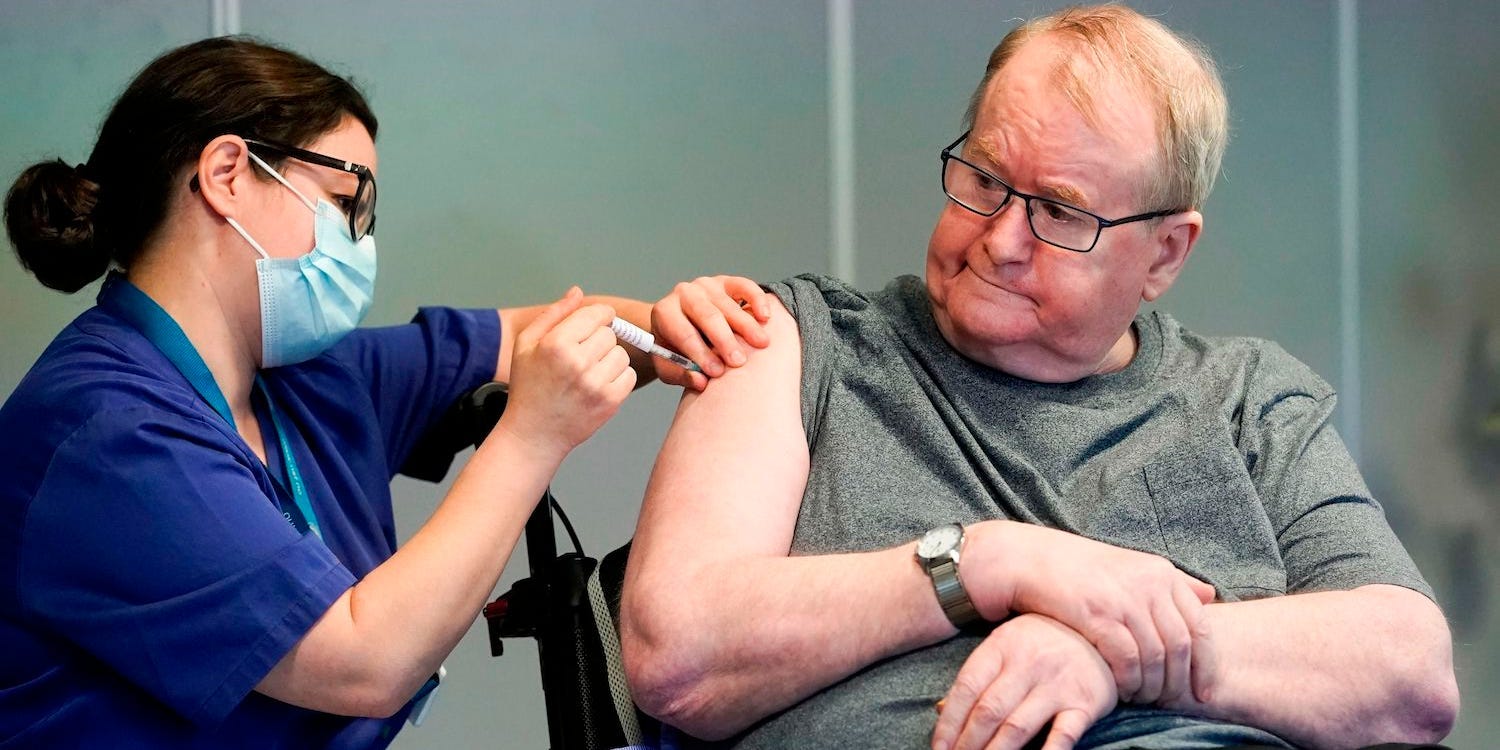 Fredrik Hagen/NTB/AFP via Getty ImagesSvein Andersen, 67, is first in Norway to receive the Pfizer-Biontech COVID-19 vaccine in Oslo, Norway, on December 27, 2020.

Norwegian health officials have warned that vaccinating the most frail older people with serious underlying health conditions could be dangerous after the country reported more than 25 deaths.

The Norwegian Medicines Agency first reported on Thursday that 23 elderly people had died in a short time after receiving their first dose of the Pfizer vaccine, 13 of which may have suffered from deadly side effects.

However, the number of deaths has been updated to 29 people as of Sunday, according to Bloomberg.

According to the agency, “all deaths” are linked to the Pfizer vaccine, which was the only one available in the country until Friday.

Officials listed fever, vomiting, and nausea as side effects which “may have led to the deaths of some frail patients,” Sigurd Hortemo of the Norwegian Medicines Agency said, Bloomberg reported.

The latest deaths, which all occurred among patients in nursing homes, prompted officials to adjust their advice on who gets the COVID-19 vaccine, leaving it up to individual doctors to decide who should be vaccinated.

The country also warned that other countries should keep an eye on their elderly vaccine recipients in the most cautious statement from a European health authority yet.

However, Norwegian officials maintain they are not alarmed and that allergic reactions to vaccines are still very rare.

“We are not alarmed by this. It is quite clear that these vaccines have very little risk, with a small exception for the frailest patients,” Steinar Madsen, medical director with the agency, said, according to ABC News.

“Doctors must now carefully consider who should be vaccinated. Those who are very frail and at the very end of life can be vaccinated after an individual assessment,” he added.

Pfizer and BioNTech have said they are working with the health officials to investigate the deaths but added that “the number of incidents so far is not alarming, and in line with expectations,” according to Bloomberg.

Insider also asked Pfizer for comment but did not hear back at the time of publication.

More than 30,000 people have received the first shot of the vaccine in Norway since the end of December, according to official figures.

According to a tracker by Johns Hopkins University, more than 58,000 Norwegians have been infected since the beginning of the pandemic, but only 517 have died.

On Friday, the European Medicines Agency said it would consider asking for monthly safety reports from companies authorised to sell vaccines, starting in January with the Pfizer jab.