North Korea just unveiled what appears to be a new intercontinental ballistic missile, and it's huge 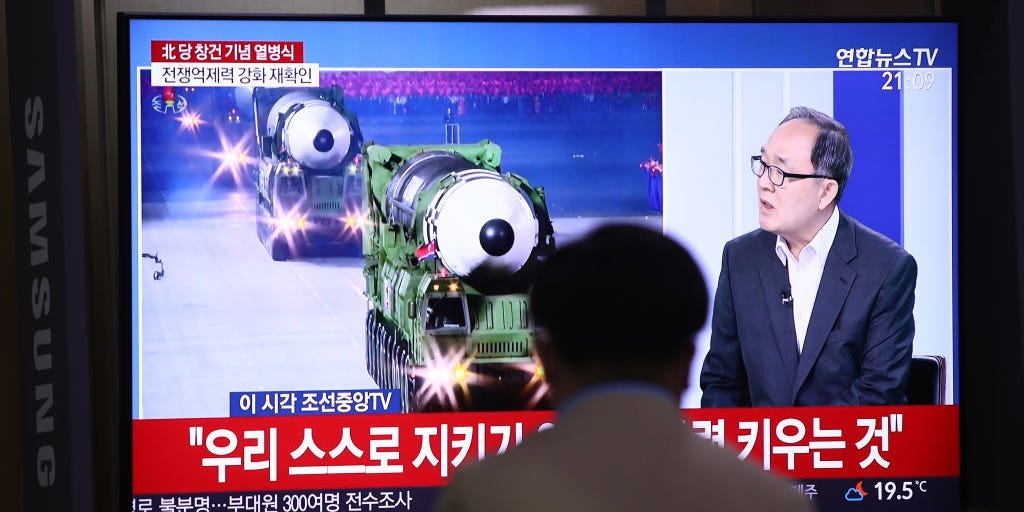 North Korea unveiled what appears to be a new intercontinental ballistic missile (ICBM) at a big military parade in Pyongyang Saturday, and it’s huge.

During the military parade held in Kim Il-Sung Square in the heart of the North Korean capital to mark the 75th anniversary of the founding of the ruling Worker’s Party, North Korea’s military rolled out a massive, previously-unseen ICBM on a transporter erector launcher (TEL) with a total of 22 wheels.

As the finale of its parade, North Korea shows what is apparently a new missile on an 11-axle TEL. pic.twitter.com/4fskoJubBV

The missile appears to be the largest road-mobile, liquid-fuelled missile, Ankit Panda, a Stanton Senior Fellow in the Nuclear Policy Program at the Carnegie Endowment for International Peace, tweeted Tuesday.

Melissa Hanham, a missile expert and the deputy director of the Open Nuclear Network, said the missile was “Huuuuge,” adding that the missile is potentially capable of carrying Multiple Independent Reentry Vehicle [MIRV] nuclear warheads, a capability North Korea has not yet demonstrated.

About a week before the parade, South Korean and US intelligence detected the movement of North Korean ICBMs, a South Korean official told local media.

“The missile is larger than the one they fired in 2017, and we believe they will showcase that at a military parade on October 10,” the Seoul official said, according to The Korea Herald.

The powerful weapon was unveiled just a few months after the country tested its first ICBM, the Hwasong-14, in July 2017. Analysts said they believe the Hwasong-15 could theoretically strike anywhere in the continental US.

The Trump administration has been trying to persuade North Korea to abandon its pursuit of missiles and nuclear weapons. President Donald Trump even met with North Korean leader Kim Jong Un twice to discuss the matter.

Despite the Trump administration’s claims that the Korean peninsula was on a path toward denuclearization, North Korea appears to be moving in the opposite direction, even if it is no longer conducting nuclear tests.

“Progress toward the denuclearization of the Korean Peninsula” is not going quite to Trump’s “plan”… https://t.co/W0dChexJ1v

Kim Jong Un said Saturday that his country “will continue to strengthen war deterrence for self-defence to deter, control and manage all dangerous attempts and threatening acts, including ever-growing nuclear threats, from hostile forces,” according to Yonhap News Agency.

Saturday’s display of the previously-unseen ICBM marks the first time the country has shown off a new long-range missile at a military parade since 2018.

Chad O’Carroll, a North Korea watcher and the CEO of the Korea Risk Group, told Reuters that North Korea displayed more military hardware in this parade than almost all previous parades.

Pictures speak for themselves pic.twitter.com/SYYp3xCTL8

In addition to the new ICBM, the country appears to have also shown off a new submarine-launched ballistic missile.

“It is disappointing to see the DPRK continuing to prioritise its prohibited nuclear and ballistic missile program over working towards a brighter future for the North Korean people,” a senior Trump administration official told Reuters.