Many have called for Capitol Hill rioters to be added to the no-fly list, but watchdog groups say the notoriously secretive process is 'unconstitutional' 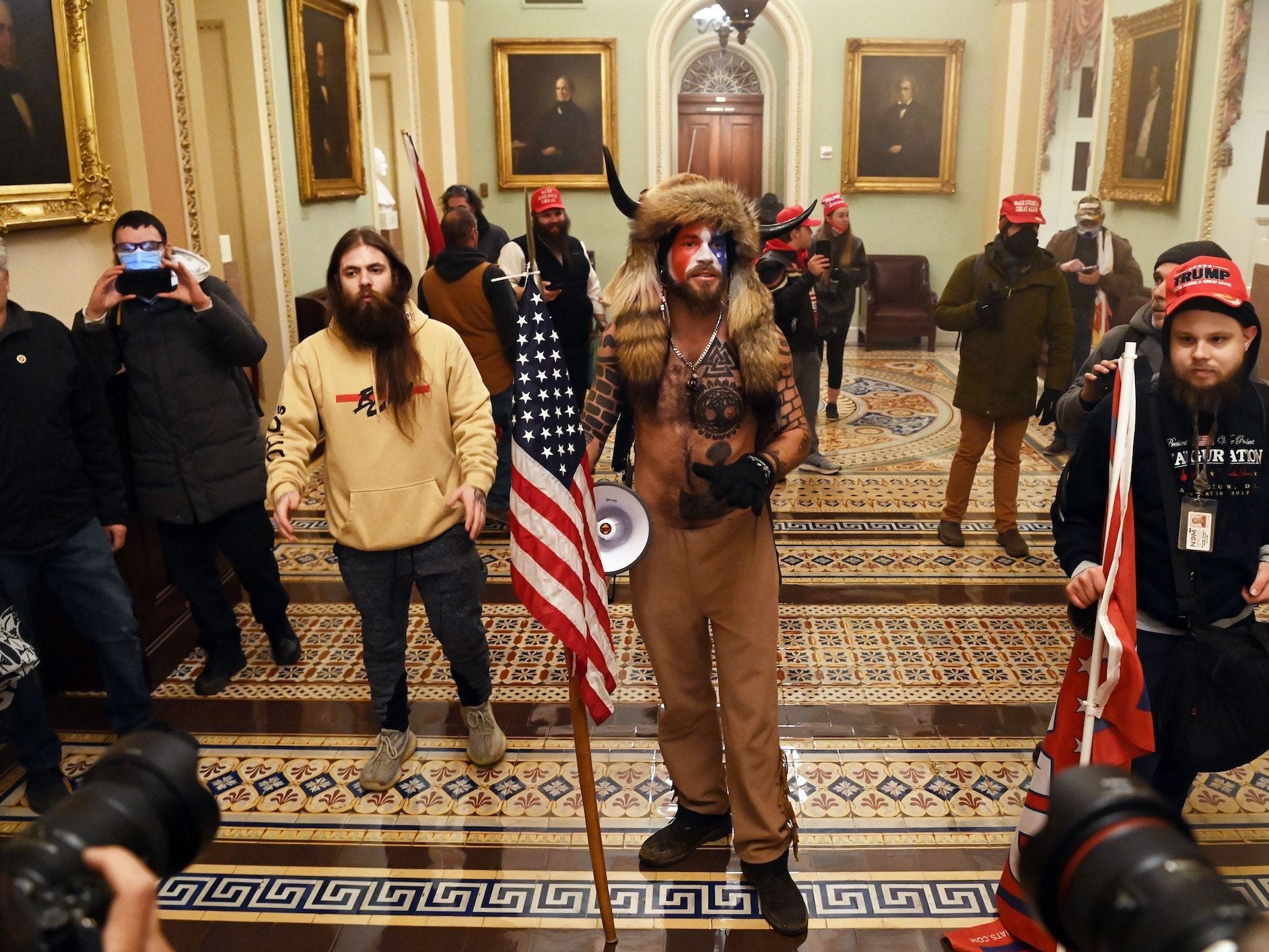 Saul Loeb/AFP via Getty ImagesSupporters of President Trump in the US Capitol on January 6, 2021.

Shortly after pro-Trump rioters stormed the US Capitol, videos of passengers being arrested or deplaned went viral on social media, with some people claiming they show Capitol rioters being prevented from flying because they have been put on the no-fly list.

While many of those claims have turned out to be false, the idea that Capitol Hill rioters should be added to the no-fly list appears to resonate with a lot of people.

This comes after politicians ranging from Senate Minority Leader Chuck Schumer to Bennie G. Thompson, the chair of the House Committee on Homeland Security, called for all rioters involved to be added to the no-fly list, and amid airlines attempting to step up their security measures post-siege.


Read also:
Don’t trust those viral videos that claim to prove Capitol rioters are being added to ‘no-fly lists’

While it sounds easy enough to add identified individuals who participated in a domestic terrorist attack on the federal no-fly list, it actually isn’t.

Forbes reports that if it were to happen, it probably wouldn’t be until Joe Biden takes office, as he has previously said he would pass a law against domestic terrorism. This would be necessary for putting the rioters on the no-fly list as domestic terrorists.

Currently, as Forbes reports, the definition of domestic terrorism provided by section 802 of the PATRIOT Act does not make it a chargeable criminal offence: none of the rioters were charged with offences labelling them terrorists.

However, according to CNN, the FBI is now considering adding rioters to the no-fly list.

Little is known about the no-fly list, though, and the notoriously secretive list has been criticised on all sides for being unconstitutional and in need of a major overhaul.


Read also:
How airlines are responding to Wednesday’s siege at the US Capitol as they’re faced with the prospect of flying rioters home 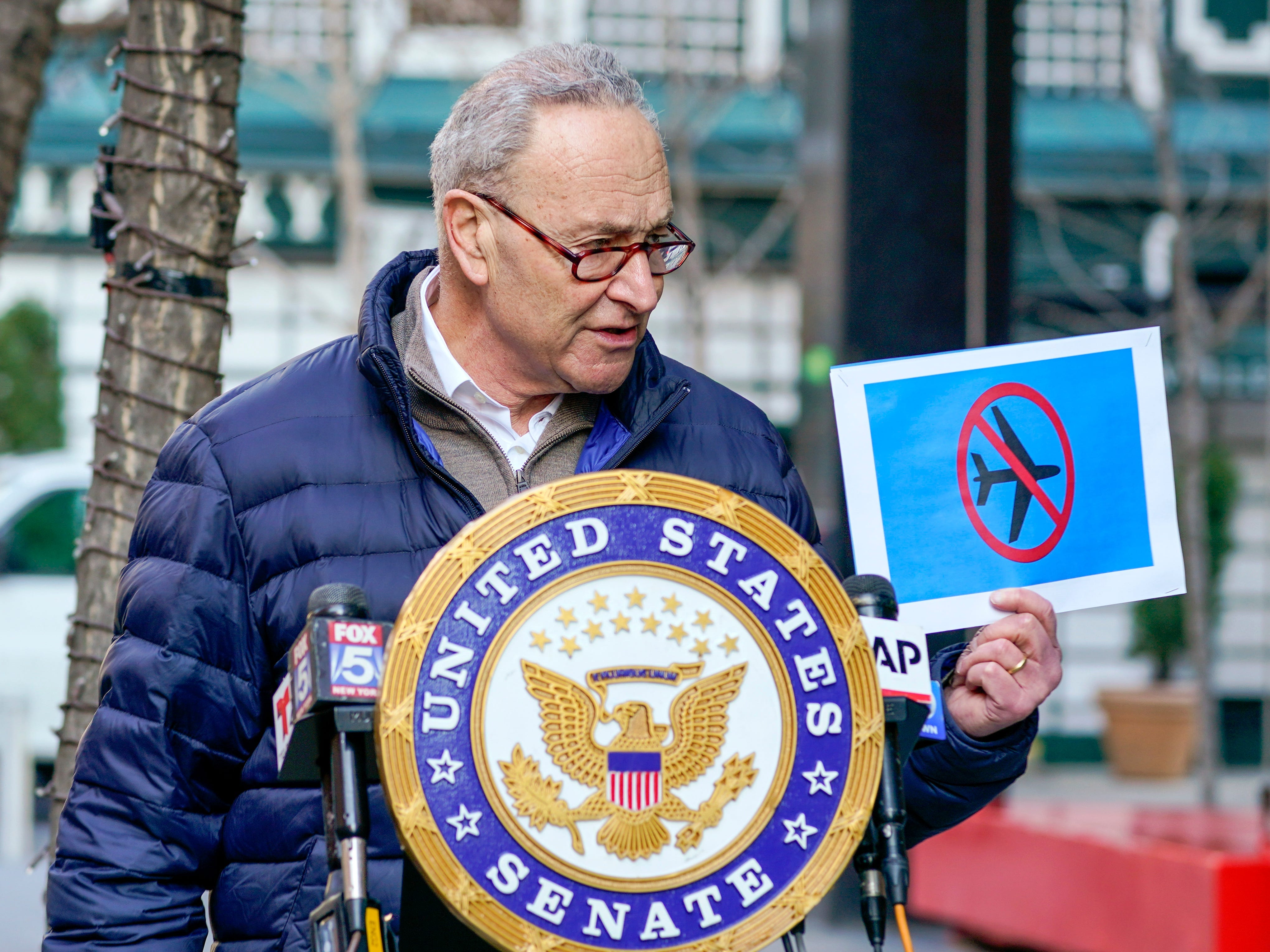 Mary Altaffer/AP PhotoSenate Minority Leader Chuck Schumer called for individuals who stormed the Capitol to be placed on the no-fly list.

According to the Transportation Security Administration (TSA), which has authority over US travel security, the no-fly list “is a small subset of the US government Terrorist Screening Database (also known as the terrorist watchlist) that contains the identity information of known or suspected terrorists.”

The list is maintained by the FBI’s Terrorist Screening Centre, but used by the TSA as part of its Secure Flight program, which allows the TSA to prevent those it deems high-risk from getting past security.

Representatives for the TSA declined to provide further information about the no-fly list but said in a statement that they’re on high alert following the events of January 6, and that “TSA prepares for all contingencies, and employs multiple layers of security that are both seen and unseen.”

The statement also clarifies that their no-fly list screening is just one of many security measures and that it takes place prior to passengers arriving at security checkpoints. 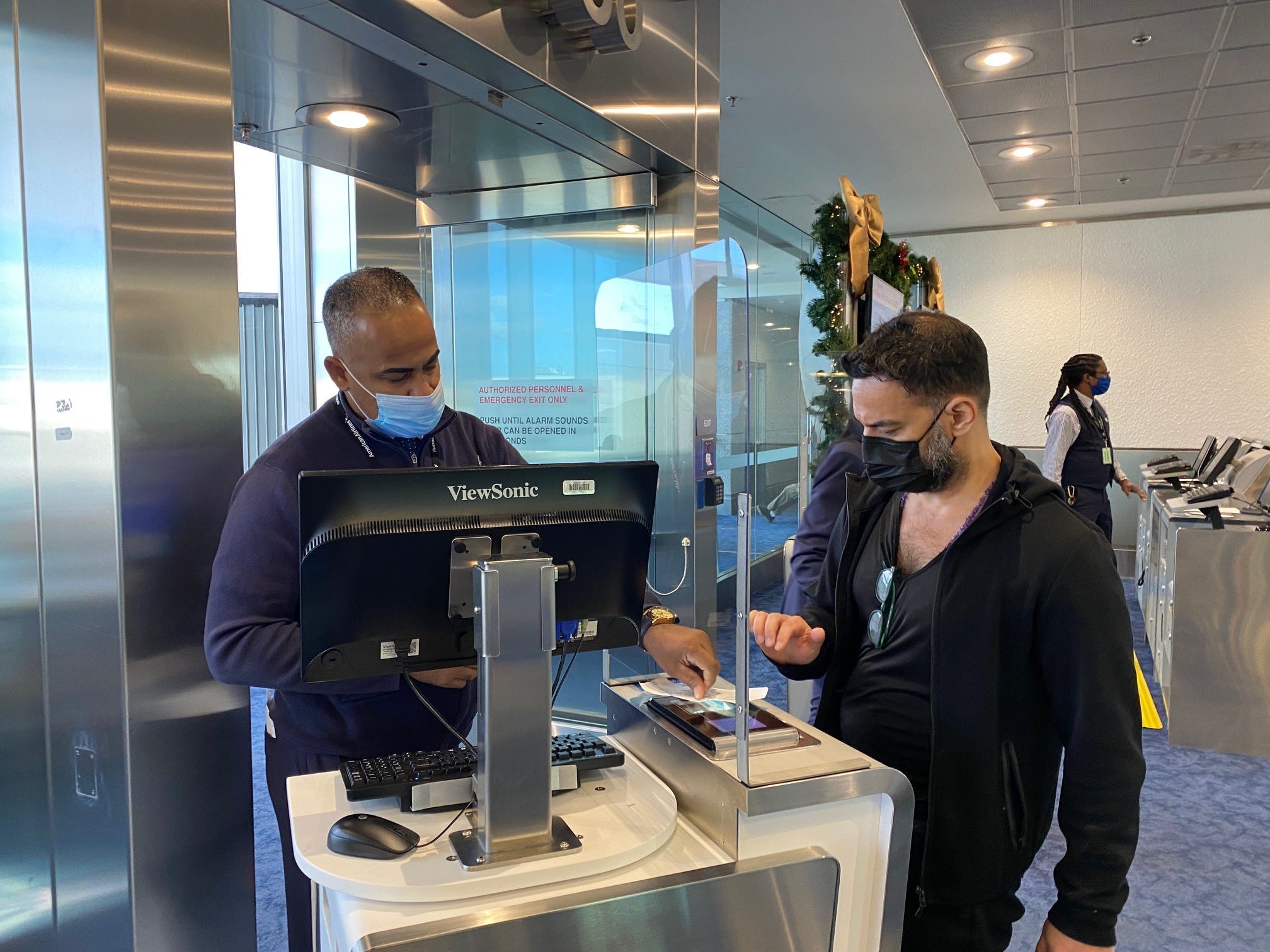 Chris SloanIndividual airlines have their own lists of banned passengers.

The government doesn’t disclose how many people are on the no-fly list, though a June 2016 statement by Democratic California Senator Dianne Feinstein said that there were around 81,000 people on the no-fly list at the time, with fewer than 1,000 of those people being US citizens.

Most US-based airlines have their own, separate list of banned passengers, in addition to the federal no-fly list.

For example, a spokesperson for United told Insider that they have banned 615 people from the airline since implementing their mandatory mask policy in early May.


Read also:
Major US airlines have created a ‘no fly list’ for travellers who refuse to wear face coverings during the pandemic

Representatives for Delta, United, and American Airlines did not wish to share further details or specifics about their internal no-fly lists.

According to a spokesperson for American, “At American, safety is our highest priority. We will continue monitoring closely and working with local law enforcement and airport authority partners to ensure the safety of our customers and team members on the ground and in the air.”

For Capitol rioters to end up on airlines’ individual no-fly lists, they would have to fail to comply with airline-specific regulations. 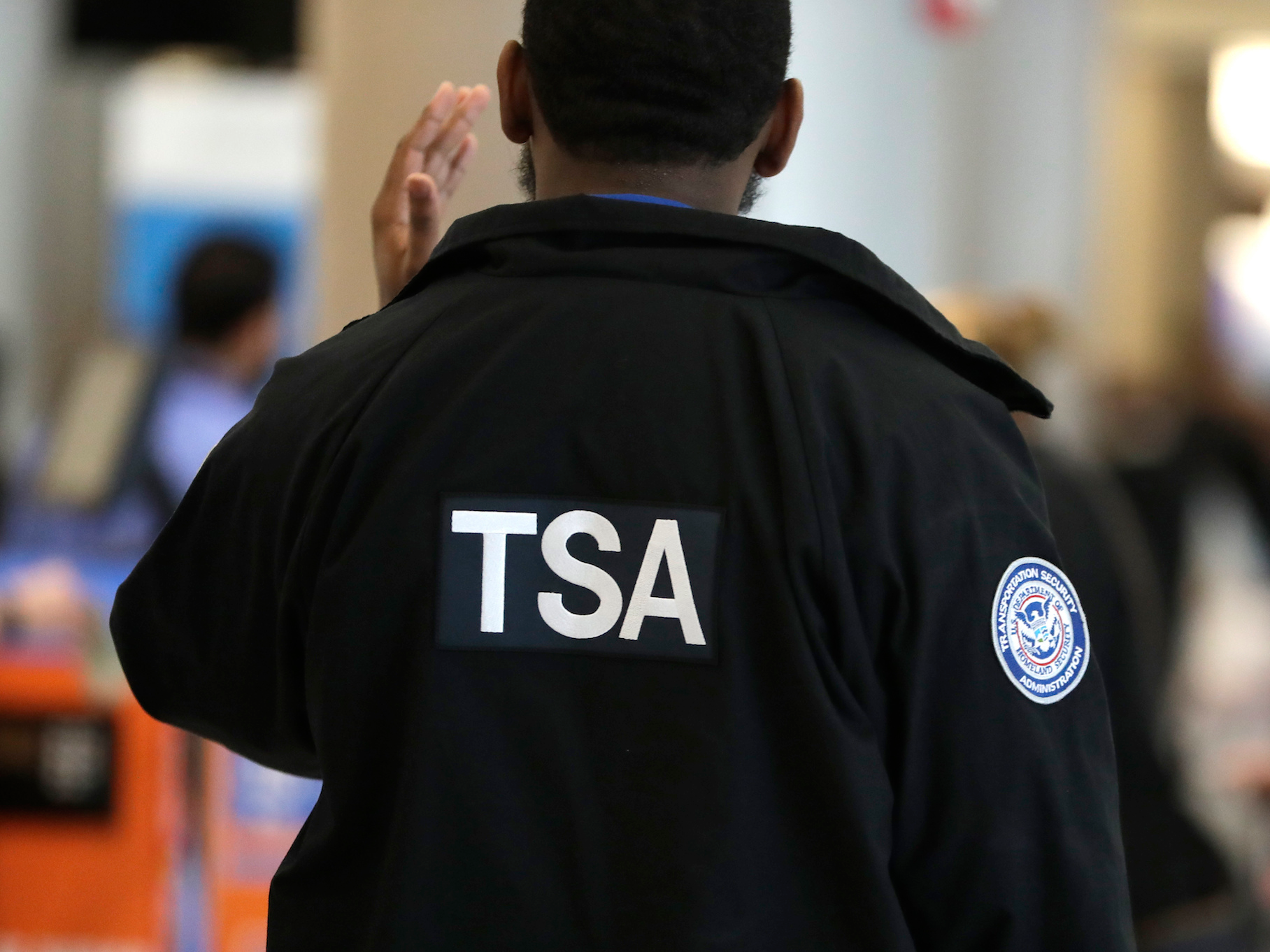 Lynne Sladky/APThe no-fly list is maintained by the FBI’s Terrorist Screening Centre, but used by the TSA as part of its Secure Flight program.

Very little is known about who goes on the list and why, as the government doesn’t disclose this information. However, the Yale Law Journal writes that “public record suggests that it’s based on tips collected by confidential sources.”

According to the FBI, those on the list “may present a threat to civil aviation or national security.”

The FBI further states that to get on the list there must be “credible information demonstrating that the individual presents a threat of committing an act of terrorism with respect to an aircraft, the homeland, US facilities or interests abroad, or is a threat of engaging in or conducting a violent act of terrorism and is operationally capable of doing so.”

HG.org, a website for legal resources pertaining to law and government, says that the list is not just used against domestic terrorism, but also to stop registered sex offenders or those suspected of trafficking illegal drugs from boarding flights.

Patrick G. Eddington, a research fellow in homeland security and civil liberties at the Cato Institute think tank, told Insider that, according to his sources at the Department of Homeland Security (DHS), “the criteria is fairly expansive.”

He said that the only reason the public knows anything at all is because of leaks that have been made to various press organisations over the last several years.

Citing a 2013 leak of watchlist guidance, he said getting someone added to the list “doesn’t require that you have any kind of concrete facts or irrefutable evidence.”

“So because the bar is so relatively low to be put on these lists to begin with, anytime you get people like Chuck Schumer and Bennie Thompson making noise about putting literally what could be hundreds or thousands of people on a list, that raises all kinds of alarm bells” he said, calling it “a completely due process-free approach to things.”

Things may change soon, though, making getting added to the list more difficult.

A bill titled “No Fly for Terrorists Act,” was introduced to Congress in 2019, which would prohibit the Department of Homeland Security from stopping US citizens or permanent residents from travelling “unless they have been convicted of a federal crime of terrorism.” 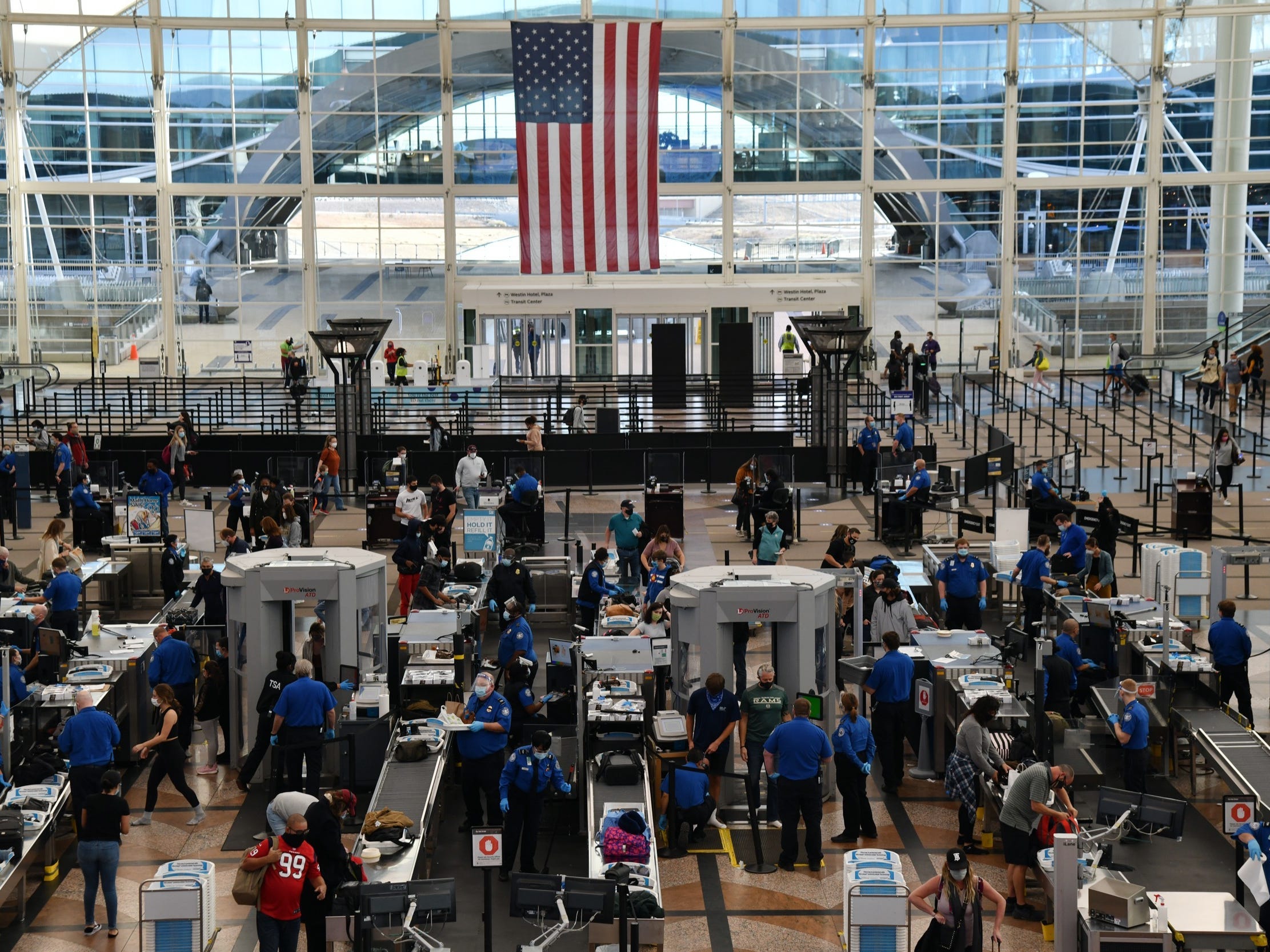 The no-fly list has been criticised on the basis of impinging on civil liberties, as well as for its potential for ethnic, religious, economic, political, and racial profiling and discrimination.

“The No Fly List has been used since its inception to unjustly target Black and Brown people, particularly Muslims, and is a due process nightmare,” Manar Waheed, a senior legislative and advocacy counsel at the American Civil Liberties Union (ACLU), told Insider.

Of the many calls to add Capitol rioters to the list, he said “Doubling down on it now will simply further entrench an error-prone and unconstitutional system that will continue to be used unfairly against people of colour.”

There are currently a number of lawsuits against the government by individuals on the list who claim no affiliation to any terrorist groups, many of which are represented by the ACLU, according to law website HG.org.

However, since the US government can withhold classified information on the grounds of protecting national security,HG.org says that prosecuting these claims is difficult.

There have been some wins for plaintiffs.

In 2015 for example, the 9th Circuit ruled that the TSA had to start disclosing whether people were on the list, and summarize why â€” previously they had to share absolutely no information regarding the no-fly list.

However, they must do this without revealing classified information, which the ACLU argues keeps their reasonings too vague.

In 2019 however, the 9th US Circuit Court of Appeals ruled that the government was not required to give full detailed explanations due to national security concerns, according to the AP.

Another issue with the no-fly list is that it’s allegedly prone to “false positives,” which is when innocent people are added to the list because, for example, their names are similar to those of suspected terrorists.

In 2008, it was reported that “one major US airline records 9,000 false-positives a day,” according to an NBC article sourcing then-Homeland Security Secretary Michael Chertoff.

Public figures such as the late Senator Ted Kennedy and former Georgia Representative John Lewis have found themselves on the no-fly list, according to CNN, as well as Yusuf Islam, formerly known as Cat Stevens. 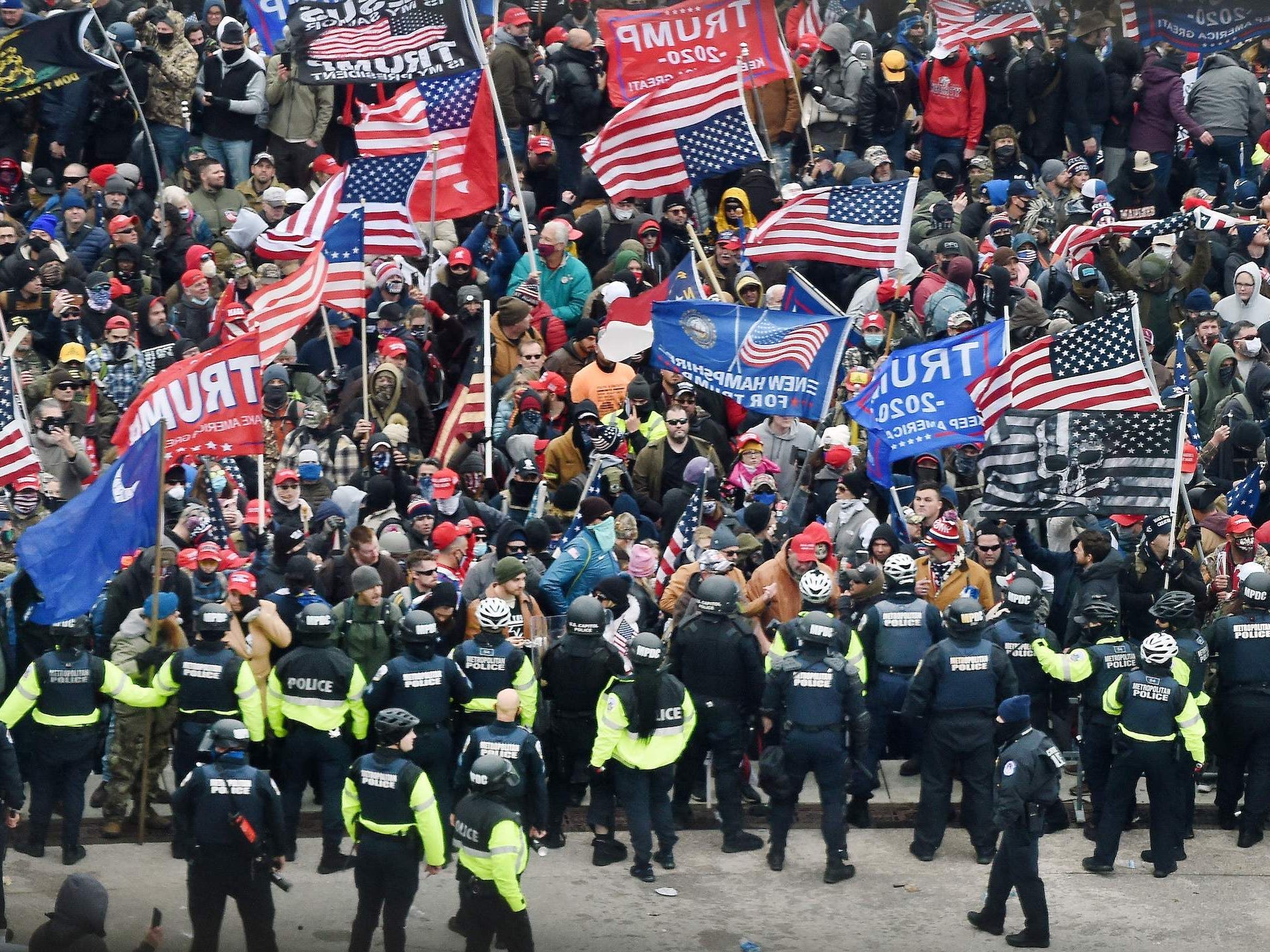 OLIVIER DOULIERY/AFP via GettyNot everyone on Capitol Hill grounds on January 6 committed a crime.

Eddington described the calls for adding rioters to the no-fly list “security theatre,” a term he borrowed from privacy and security expert Bruce Schneier, saying that the FBI acknowledged having over a hundred thousand digital images to sort through and that not everyone on Capitol grounds on January 6 committed a crime.

Those who did commit crimes, were identified, and have arrest warrants issued he said are “automatically going to be on the no-fly list,” though he worries that this will just spur people to drive next time.

“Think about what that means for somebody who went to the Capitol, didn’t actually engage in the breach, has their photograph swept up in all of this, and then because of this political pressure winds up getting put on the list,” he said. “Their ability to get off that list is going to be really difficult because there is no judicial review stuff.”

Eddington believes that Americans ought to have a legally protected right to sue the TSA, DHS, or FBI should they find themselves on the list without reason.

He also believes that the no-fly list is in need of “massive legislative overhaul,” saying that the list needs to be based on actual probable cause, and ought to be directly tied to constitutional standards from a legal standpoint.

“And it’s not, that’s why this stuff is so troubling,” he said.