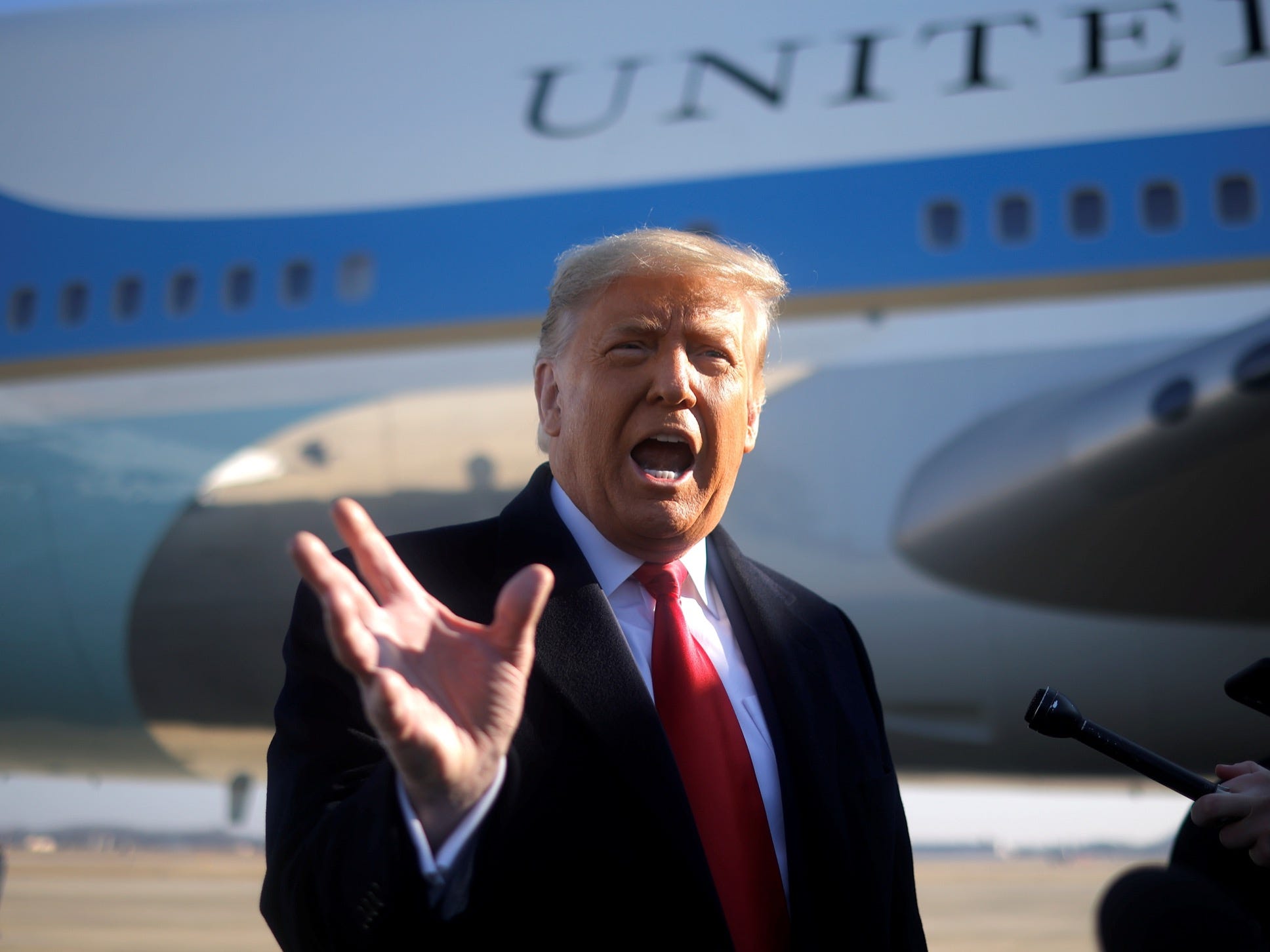 REUTERS/Carlos Barria TPX IMAGES OF THE DAYU.S. President Donald Trump speaks to the media before boarding Air Force One to depart Washington on travel to visit the U.S.-Mexico border Wall in Texas, at Joint Base Andrews in Maryland, U.S., January 12, 2021.

Nearly a week after a mob stormed the US Capitol building, not a single federal official has hosted a public briefing to inform Americans about what happened, and what the federal government is doing to bring insurrectionists to justice.

The public information about the riot and its aftermath has trickled in from various sources: Individual journalists doing the legwork, briefings from public officials available only to members of the press, public statements, court filings, interviews with members of Congress, and briefings hosted by the Washington, DC, mayor’s office.

Five people are known to have died in connection with the storming of the Capitol, where pro-Trump rioters invaded the building to stop the certification of electoral college votes confirming President-elect Joe Biden’s 2020 election victory over President Donald Trump. At least 150 people are being investigated by the Department of Justice, according to The New York Times.

But top officials in the federal government have been largely silent. None have appeared before the American people to address the riot at the nation’s Capitol, the most severe breach on the branch of government in more than 200 years.

Trump, in command of the most sophisticated intelligence apparatus in the world, himself spoke with reporters for two minutes Tuesday before boarding Air Force One for an event in Texas.

He did not say anything about law enforcement activity following the riot, and said his speech inciting the insurrection was “totally appropriate.”

Two federal agencies involved in the response to the riot â€” the Department of Justice and the US Military â€” have provided private briefings to journalists.

Michael Sherwin, the Acting US Attorney in Washington, DC, spoke to reporters Thursday. Gen. Daniel Hokanson, who oversees the National Guard Bureau, spoke with reporters Sunday about how the agency was mobilized to gain control of the riot.

The Acting Attorney General, Jeffrey Rosen, has told all federal prosecutors that the US Attorney’s office in Washington and the central Justice Department would be in charge of prosecuting rioters, according to a memo obtained by The New York Times. Rosen and FBI Director Chris Wray have published public statements condemning rioters, but have otherwise kept out of the public’s eye.

Neither Rosen nor Wray has given a public briefing, and neither are expected to participate in a briefing to members of Congress about the chaos, according to The Wall Street Journal. Representatives for the FBI didn’t immediately respond to Insider’s request for comment.

After Insider inquired about the lack of public briefings, the Justice Department announced it would host one at 3 p.m. Tuesday.

The US Capitol Police department, which is in charge of security at the federal complex that houses the Senate and House of Representatives among many other legislative offices, has distributed written statements but hasn’t given a public briefing either. Capitol Police Chief Steven Sund resigned following the riot without giving any public briefings. A representative for the department didn’t immediately respond to Insider’s request for comment.

Rep. Tim Ryan, a Democratic member of the Legislative Branch Subcommittee that oversees the department’s spending, told reporters Monday he received a private briefing from the department. A Capitol Police officer was among the five dead in connection with the event, and Ryan said several officers were under investigation for their conduct during the insurrection.

Washington, DC, Mayor Muriel Bowser has held daily press conferences addressing the city’s response to the insurrection and to the ongoing coronavirus pandemic. Army Secretary Ryan McCarthy, who participated in approving the National Guard backup for Capitol Police, explained the process at a press conference hosted by Bowser a day after the riot.

On the same day, White House Press Secretary Kayleigh McEnany made a brief statement about the violence, but took no questions from reporters and gave no information about how the federal government was addressing it.

The White House has otherwise not held a briefing since December 15. The White House press office didn’t immediately respond to Insider’s request for comment.