On Monday, Nintendo announced a slew of new games coming to its Switch console.

Many of the games Nintendo has planned will revive classic franchises like Pokémon and Metroid. Others are sequels to newer games.

Release dates have also been given for two highly-anticipated Switch titles: the upcoming “Super Mario Odyssey” and the first downloadable expansion to “The Legend of Zelda: Breadth of the Wild.”

Here are all of the new games that we know are coming to the Nintendo Switch:

To kick things off, Nintendo showed a trailer for 'Xenoblade Chronicles 2,' the sequel to the original game that was released for the Wii U. This next instalment will be released for the 2017 holiday season. An entirely new Kirby game is coming to the Switch in 2018. It looks like there will be lots of fun co-op playing opportunities with this one. Nintendo surprised everyone by teasing 'Metroid Prime 4,' the first update to the beloved series in 10 years. Details are scarce, but we can't wait for this new instalment.

A new instalment of the Wii U's 'Yoshi's Woolly World' is also coming to the Switch next year. Nintendo has already announced that it will release a Pokémon fighting game, 'Pokémon Tournament Deluxe.' But on Monday it revealed that a core RPG version of Pokémon is also coming to the Switch. Don't expect to see this one for at least another year, as it's still under development. Two downloadable expansions are coming to the Switch's critically acclaimed 'The Legend of Zelda: Breath of the Wild.' The first is called 'The Master Trials,' and it can be downloaded on June 30 for $20. That $20 also gives you access to the game's second expansion coming later this year, called 'The Champions' Ballad.' The first 'Breath of the Wild' expansion also includes a new last-man-standing game mode called 'Trial of the Sword,' which will give you a sweet reward once you defeat dozens of waves of enemies: a fully-powered Master Sword, which will never break. The sequel to Nintendo's critically-acclaimed 'Splatoon' game is coming to the Switch on July 21. A new 'Rocket League' will be available this holiday season. It will support cross-network play with the Xbox One and Steam. 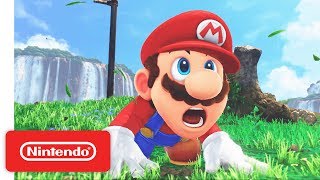