These days, you can follow every aspect of a game’s development online before it comes out. There are countless trailers, interviews and mini-documentaries made about big games that didn’t always exist a couple of decades ago.

Thanks to Game Escape on YouTube, you can now get a quick look at what life at Nintendo was like in 1994. This 12-minute clip is from a French documentary called “Otaku” that, according to the uploader, has never been translated into English before it was unearthed back in April. Hat tip to Kotaku for bringing this to our attention.

The clip begins by showing us some footage of 1990s Japan, which is great. It's always nice to establish a setting. We then get a short interview with former managing director Hiroshi Imanishi, an important figure at Nintendo from the 1960s until his retirement in 2002. Here, he's talking about the legacy of the Famicom, the company's first big game console. As an aside, the director of the documentary loved to show this statuette in the Nintendo office. It's pretty charming. Next, we meet Masayuki Uemura, the designer of some of Nintendo's old consoles. This seems silly nowadays, but he had to describe how a video game console works to the interviewer. We then get to see a game tester playing 'Super Mario All-Stars,' with a pretty choice quote about Nintendo's philosophy in the subtitles. My favourite part of this video is when the game tester is seen playing with a Super Scope, which was a shoulder-mounted gun attachment for the Super Nintendo. They splice footage of him holding the gun with footage of the game 'Star Fox,' even though that game didn't support the Super Scope. After that, we get an inside look at the secretive game development area. Those subtitles aren't a joke. Old games used to use fake names in the credits so it would be hard for their talent to be poached by other companies. Here's Shigeru Miyamoto, the creator of 'Super Mario Bros.' and many other Nintendo franchises. He's talking about his inspiration for creating Mario. He designed Mario to be especially cartoonish so he would be more recognisable in an era when video game characters were just bundles of pixels. Here is his response when he's asked if he thinks Mario is as recognisable as Mickey Mouse. This is sort of mindblowing, but as of 2016, Mario is only 15 years away from being 50. The clip ends with Miyamoto drawing his most famous creation for the documentary crew. To see the whole clip for yourself, click below and enjoy the 90s French goodness. 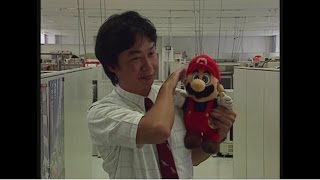