NintendoThe 1998 Game of the Year! It says so right on the box!

It was one of the most popular games on the Nintendo 64, which many of us grew up with.

But it came out 20 years ago, and the game’s visuals don’t look quite as stunning as they once did. So one intrepid student artist decided to give the game a makeover, taking “GoldenEye’s” iconic “Facility” level and turning it into the gorgeous level you’ll see if you head with us below.

'Facility' was one of 'GoldenEye's' most memorable single-player campaign levels, and could also be played in multiplayer mode. But it never looked this good. These scenes are the work of 3D modelling student Jude Wilson at Sheffield Hallam University. Jude actually just graduated with a Masters in game design! Congrats Jude! For context, this how the level looked in the original game, which debuted in 1997: Wilson re-created the level using 'Unreal Engine 4,' which is a software environment for creating games that was designed by the studio that created the blockbuster series 'Gears of War.' In the original game, James Bond descended from air vents into the bathroom at the top of the stairs where he'd pounce on an unsuspecting Russian soldier who was using the toilet. Jude Wilson
The bathroom is through the single door at the top of the stairs, on the left side.

In the original game's multiplayer level, there were countless firefights fought in these relatively constricted rooms. Jude Wilson
All the doors pictured here could be opened, which led to a lot of surprise battles.

And who could forget the side room full of secret Russian stuff? Jude Wilson
It's got a keypad and everything!

The gorgeous re-creation features details that simply weren't possible on the Nintendo 64. These details may seem small, but they're representative of the big differences between modern games and those of the late 1990s. Now if only we could play it, grenade launcher in hand... Check out a full video tour right here, care of Jude Wilson himself: 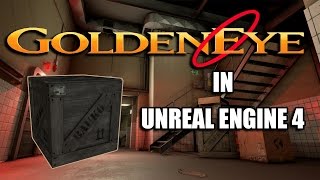