The 53% surge Nikola Corp. experienced on Tuesday in response to its $US2 billion partnership with General Motors appears to be short lived after a short-seller report sent shares plummeting as much as 13% on Thursday.

Hindenburg Research released a report alleging years of false statements from the electric vehicle manufacturer and its CEO, Trevor Milton.

Hindenburg, which is short shares of Nikola, said it believes that extensive evidence, in the form of recorded phone calls, text messages, and private emails, details “dozens of false statements” by Milton, according to the report.

From over-hyping the capabilities of its electric semi-truck, to its multi-billion dollar order book being “filled with fluff,” Hindenburg alleged a number of deceptive practices at Nikola that led the short-seller to believe that its partners “did not do their homework.”

Hindenburg is likely referring to General Motors and its recent partnership with Nikola. General Motors said on Tuesday it will provide engineering and manufacturing services to build Nikola’s electric Badger pick-up truck. In return, General Motors received an 11% stake in Nikola worth $US2 billion.

A strategist at the world’s largest wealth manager lays out 4 election-related risks that could damage investors’ portfolios – and shares how to safeguard against each one now, regardless of who wins

Hindenburg said that it suspects that the relentless rally in Tesla“pressured” General Motors to make a deal with Nikola to increase its exposure to the electric vehicle space.

And as Nikola stock has remained elevated since it went public via a reverse merger with a SPAC, its key backers have been “aggressively cashing out,” according to the report.

“Nikola’s key partners and backers have been cashing out aggressively. Worthington, Bosch and ValueAct have all sold shares. Worthington sold $US237 million shares over a 2-day span in July and another $US250 million in August,” Hindenburg said.

Now Milton is firing back.

In response to the short-seller report, Milton tweeted on Thursday, “It makes sense. Tens of millions of shares shorted the last day or two to slam our stock and hit job by hindenburg. I guess everything is fair game in war, even a hit job. I know who funded it now. Give me a few hours to put together responses to their lies. This is all you got?” 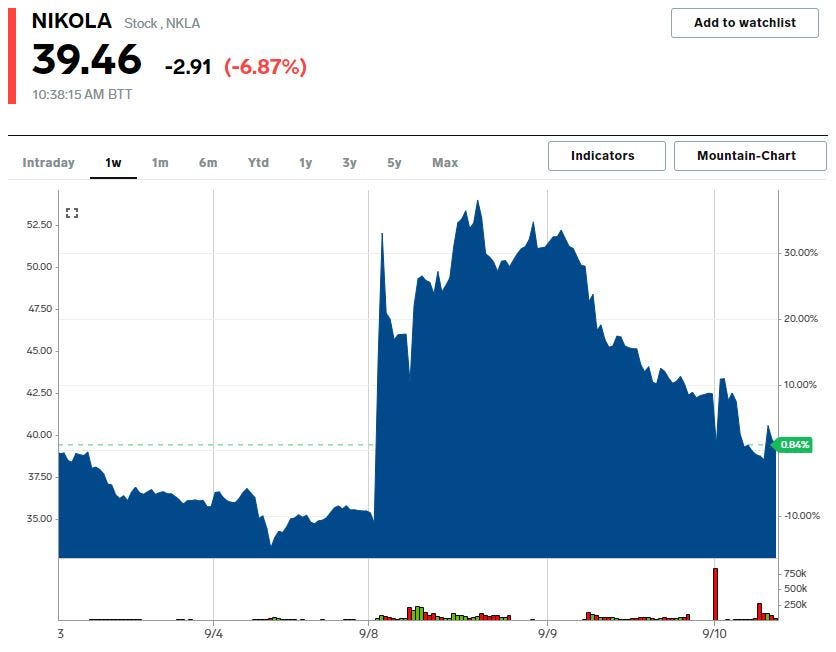