Nikola Motors, a Tesla competitor with zero revenue, is worth $23 billion. That doesn't faze its founder. 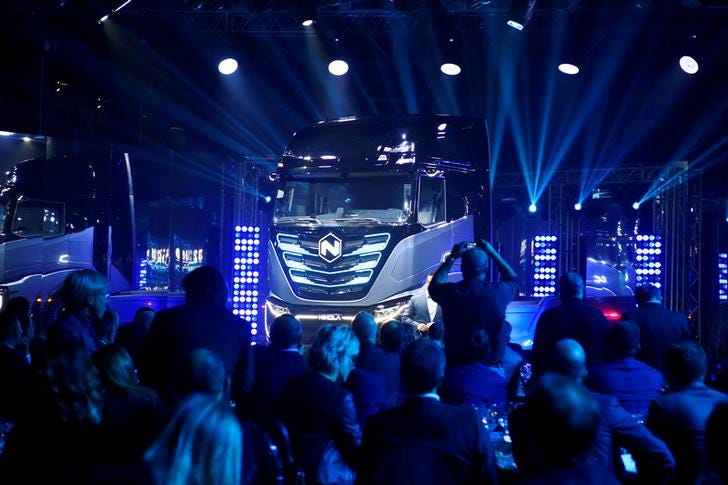 Nikola Motors, an electric truck maker that wants to eventually go after both Tesla and the freight market, is still months away from delivering its first products.

Unphased investors have nevertheless piled into the stock this month, sending the company’s valuation soaring to well above $US20 billion in just three months on public exchanges. CEO Trevor Milton says the new stockholders “don’t care” and neither does he.

“They care more about the environmental impact of what you’re doing,” Milton told CNBC in an interview Monday evening. “‘Oh, you’re six months or eight months from revenue?’ They don’t care. They’re like, ‘you know what? You’re changing the world. You’re going to reduce emissions more than anyone else we’re invested into you.'”

Nikola’s most recent surge was fuelled by the announcement that it will begin taking reservations on June 29 for its Badger truck, a full-size F-150 and Tesla Cybertruck.

But it’s the semi truck – another segment Elon Musk has lofty plans for – where Nikola plans to really make money. However, there’s one major powertrain difference: hydrogen.

“Nicola’s main revenue stream is the semi-trucks,” Milton said. “We can make about $US750,000 or more in revenue per truck we sell, which is almost five times what our competitors make per truck. That’s because we actually include all the fuel with it that we own, and we manufacture the hydrogen fuel. That’s the way we make all the money.”

Hydrogen fuel cells have been an industry choice for heavy trucks, especially on off-highway uses where batteries can be quickly depleted. CNH Industrial, a maker of heavy-duty trucks and farm equipment with a similar stance on hydrogen versus pure batteries, previously invested $US100 million in Nikola before exiting the stake during the reverse-public offering in March.

That’s where Milton thinks Nikola can get an edge on Tesla’s charging network.

“It does take more energy to produce hydrogen than it does to charge a battery electric truck,” Milton said, “but the advantage you get with hydrogen is building all your hydrogen stations on the interstate freeways, where you’re able to source your energy directly and pay under 4 cents a kilowatt hour for energy.”

In California, for example, Nikola charging could be as low as 30 cents per kilowatt hour, roughly in line with Tesla, and can help trucks work multiple shifts in a day with recharging. Orders are already backlogged to the tune of $US10 billion with customers including Anheuser-Busch.

“If you look at cost comparison of a battery electric versus hydrogen battery would be cheaper if you were paying the same rate on energy, but you don’t because the battery electric truck you’re paying the utility for energy, the hydrogen, we actually control the energy through the, through the federal transmission lines so we can get energy really cheap,” Milton said.

But despite all the optimism, there are plenty of people betting against Nikola and its soaring stock price. The company might be one of the top names on Robinhood, where investors are buying more shares of it than General Motors or Netflix, but it’s also climbed to the sixth most shorted stock in the US, according to data from S3 Partners.

“I don’t think they will ever get a mass produced car,” famed short-seller Andrew Left told Business Insider this week, dismissing the company as a “wannabe Tesla.”

And with Tesla’s “battery day” on the horizon for this month if plans hold, the race is on.