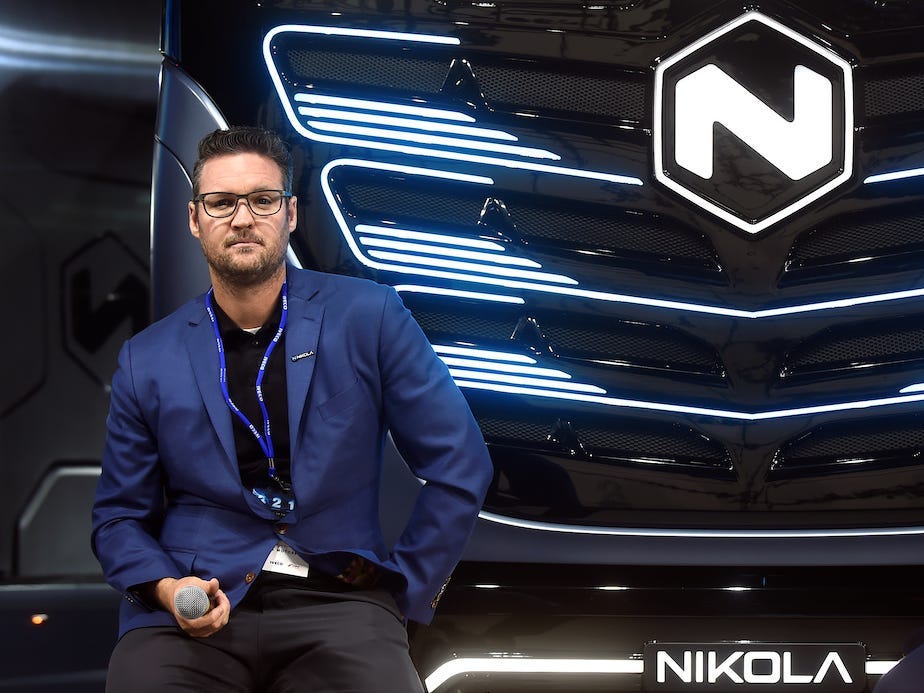 REUTERS/Massimo PincaAllegations against Nikola founder Trevor Milton aren’t all related to his company.

Until a few weeks ago, life looked very good for Trevor Milton. His zero-emissions truck company, Nikola, went public in June and put the 38-year-old on the Forbes 400 Billionaires list with a net worth of $US5.5 billion. In September, Nikola announced a deal with General Motors that came with a stock price surge and a hefty dose of credibility.

But then, short-seller Hindenburg Research published a lengthy report calling Nikola an “intricate fraud” and accusing Milton of “numerous lies.” A bit more than a week later, Milton resigned as Nikola’s executive chairman and abandoned his seat on its board.

The allegations against Milton aren’t all related to his company. On Monday, CNBC reported that an unnamed woman accused Milton of sexually assaulting her when he was 22 and she was 15.

That allegation followed one from Aubrey Smith, Milton’s cousin. In an interview with Business Insider, Smith said that Milton sexually assaulted her after their grandfather’s funeral in 1999, when he was 17 and she was 15. She said that Milton took off her bra without her permission while giving her a massage, then groped her.

“I was absolutely shocked,” Smith said. “My mind could not make sense of what was happening.” Milton denies both reports, a representative said.

Elsewhere in the news, President Trump’s COVID-19 diagnosis could mean more pain for struggling airlines, Ford’s new CEO moved into his new office, Tesla found a way to make its batteries cheaper, and more. Read about all that below, and if you haven’t yet,sign up here to get this newsletter in your inbox every week.

The president’s announcement that he and First Lady Melania Trump have tested positive for the novel coronavirus is unlikely to influence how Americans make choices about whether or not to fly themselves, industry watchers say. But the news could encourage public officials to implement new lockdowns and enforce more quarantines, limiting would-be travellers’ ability to hop a flight, even if they want to. And that could wipe out the modest recovery US airlines have been nursing over the past few months.

“I’m really less worried about airline travel and more about the question, where would you possibly go that doesn’t have restrictions put in place?” Richard Aboulafia, vice president of analysis at Teal Group, told Business Insider.

American carriers began the brutal process of furloughing more than 32,000 employees on Thursday, as protections dictated by the CARES Act expired. And while some may disparage the idea of Congress sending more taxpayer money to such big corporations, the flight attendants, baggage handlers, gate agents and others now out of a job face prolonged unemployment in a faltering economy and a loss of health coverage during a global pandemic.

“I could never be as happy working a 9-5 as I am in the skies,” one told Business Insider.

Usually, the first day on a job involves getting your computer set up, learning who’s who, finding the restrooms, and assessing the snack situation. For Jim Farley, it involved shaking up the highest echelon of Ford’s management team. The automaker’s new CEO is bent on delivering the 8% profit margin that Wall Street has demanded for years, and his plan to get there (along with some those changes in the C-suite) hinges not on chasing Tesla, but on Ford’s specialties: pickup trucks and Mustangs.

Cash-strapped airlines must gamble on how many travellers will book last-minute Thanksgiving flights, with no room for error

As anyone who’s flown over Thanksgiving has probably guessed, the holiday weekend isn’t just a peak travel time for many airlines, it’s a peak profit time. But data shows that so far, American and United are seeing just 25% as many November bookings as they did last year. Delta’s looking at 12%. Travellers may be waiting until the last minute to make plans â€” but a late surge in bookings would present its own suite of challenges for already struggling airlines.