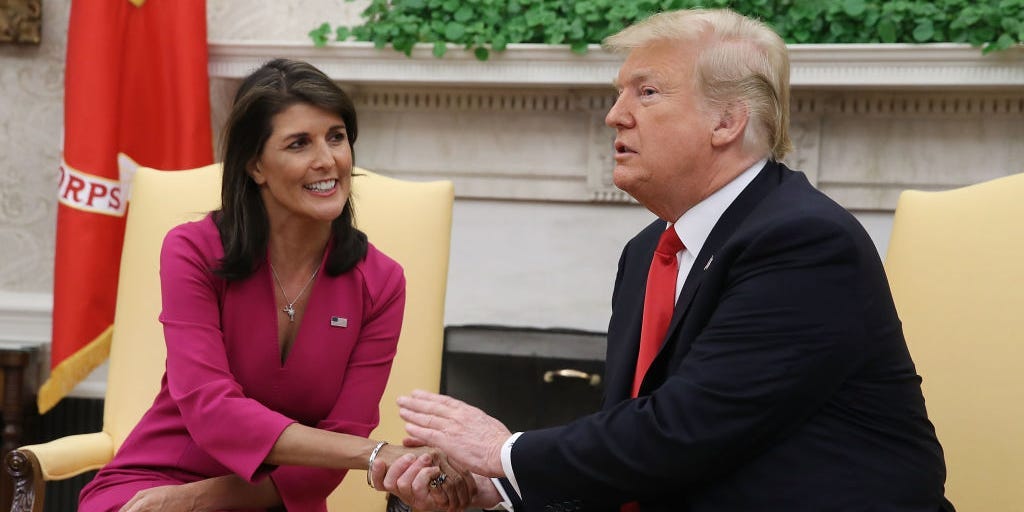 Most of President Donald Trump’s allies have thrown their support behind his baseless claims of voter fraud in an effort to overturn the 2020 election results.

Yet Nikki Haley â€” his former United Nations ambassador and a consistent supporter of the Trump administration since her departure from the in 2018 â€” has so far steered clear of the conversation.

Last week, before Insider and Decision Desk HQ called the race for President-elect Joe Biden on November 6, Haley treaded carefully to display her support for Trump.

“We all owe @realDonaldTrump for his leadership of conservative victories for Senate, House, & state legislatures,” Haley tweeted. “He and the American people deserve transparency & fairness as the votes are counted. The law must be followed. We have to keep the faith that the truth will prevail.”

Her vague comment came less than an hour after Donald Trump Jr., the president’s son and campaign adviser, called out future presidential hopefuls for a “total lack of action” in the Trump campaign’s voter-fraud fight. Haley has been rumoured as a potential candidate for the Republican presidential nomination in 2024.

The total lack of action from virtually all of the “2024 GOP hopefuls” is pretty amazing.

They have a perfect platform to show that they’re willing & able to fight but they will cower to the media mob instead.

Don’t worry @realDonaldTrump will fight & they can watch as usual!

In the days that followed, however, Haley hasn’t echoed or defended Trump’s false rhetoric that he “will win” the election.

Read more: Tom Cotton is already laying the groundwork in New Hampshire for a 2024 presidential run

Instead, she’s focused on touting other GOP priorities, including winning two upcoming run-offs in Georgia, which would help Republicans maintain a majority in the Senate or give Democrats control over the upper chamber of Congress.

“One of many reasons these Georgia races matter is that if the Dems gain control, Bernie Sanders becomes budget chair,” she tweeted.“He has said he wants to slash military budgets and called for $US97 trillion more in federal spending. Georgia, we are counting on you! #SayNoToBernie.”

Her statement suggests that Biden has won the election, as Vice President-elect Kamala Harris would then have the power to cast a tie-breaking vote in the Senate.

I could not be more excited or proud to support our GOP women. While they might have been outspent, they could not be out worked. I can't wait to see what they do when they bring that same fight and determination to Washington.https://t.co/D4vST1NexS

With Dems adopting far-left stances, like defunding the police, packing the Supreme Court, & the Green New Deal, the Dems failed to take control of the Senate, Republicans gained seats in the House. This will push the radical Dems to rethink their extreme agenda. @standamericanow

The most contentious subject Haley recently waded into was the high-profile college football game between Clemson and Notre Dame, with the former South Carolina governor rallying behind her alma mater.

Haley is known to be friendly with the press and open to weighing in on the major issues of the day throughout her political career, though she was more cautious as UN ambassador when Trump’s behaviour or tweets would make headlines.

She served her role in the Trump administration for two years and resigned in 2018. She has since founded a conservative nonprofit, Stand for America. She held a speech at the Republican National Convention in August to support Trump’s reelection.

Haley did not respond to Insider’s request for comment.