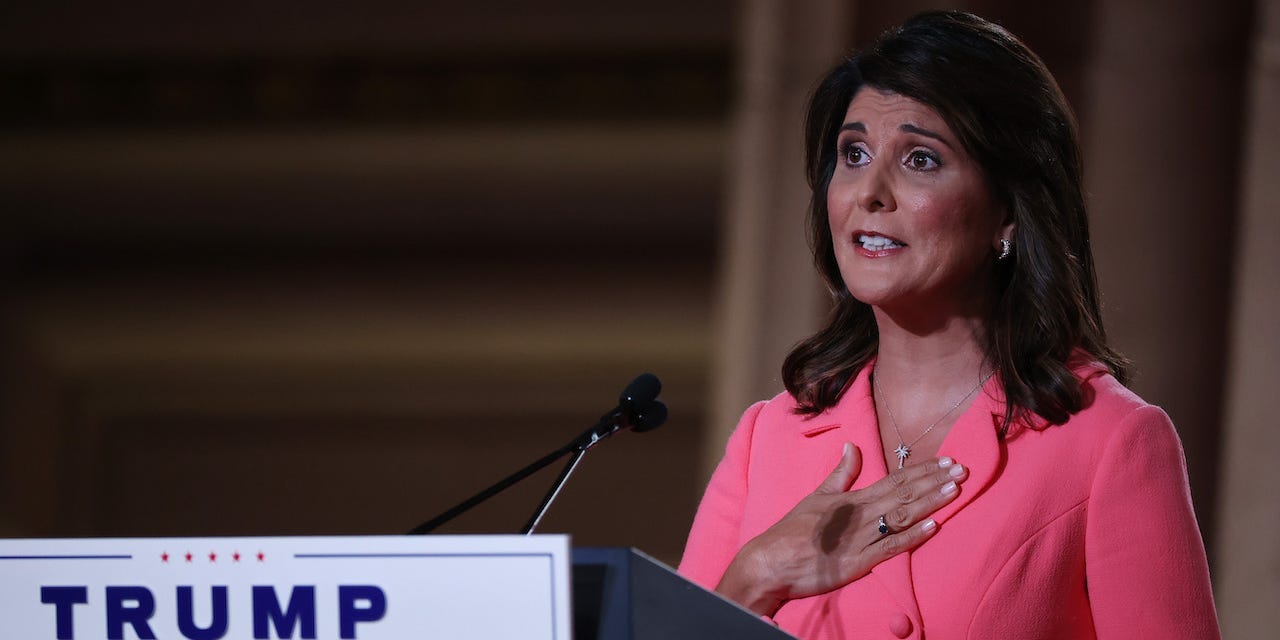 Chip Somodevilla/Getty ImagesFormer U.S. Ambassador to the United Nations Nikki Haley stands on stage in an empty Mellon Auditorium while addressing the Republican National Convention at the Mellon Auditorium on August 24, 2020 in Washington, DC.

“Joe Biden and the Democrats are still blaming America first,” she said. “Donald Trump has always put America first and he has earned four more years as president.”

The former South Carolina governor defended Trump and her own record on relations with Iran, North Korea, and Israel, celebrating the president for “ripping up” the previous administration’s nuclear deal with Iran and for imposing sanctions on North Korea.

Haley argued that the Democratic party’s “vision for America is socialism” and that “they want to tell Americans how to live and what to think.”

The daughter of Indian immigrants, Haley argued that “America is not a racist country” and that “every Black life matters,” mentioning Black police officers, business owners, and children whose “lives are being ruined and stolen by the violence on our streets.”

Haley resigned from her post as UN ambassador after two years at the end of 2018, shortly after Trump announced he trusted Russian President Vladimir Putin over US intelligence officials at his notorious Helsinki press conference. She has since served on the board of Boeing, raked in a reported $US200,000 for speaking engagements, and founded a conservative non-profit, Stand for America.

She’s publicly disagreed with Trump on rare occasions, including in certain instances when the president has made racist statements.

“I proudly serve in this administration, and I enthusiastically support most of its decisions and the direction it is taking the country,” Haley wrote in a September 2017 op-ed. “But I don’t agree with the president on everything.”

Haley called Trump’s response to the deadly 2017 neo-Nazi rally in Charlottesville “hurtful and dangerous” in her 2019 book, which offered a largely glowing review of the president.

She wrote that she called the president during the backlash to his offensive remark that there were “very fine people” among the neo-Nazi marchers. She said she told Trump he had to “stop acknowledging the haters” and “understand the power of your voice.” Haley said Trump disagreed with her comparison between the racist ralliers’ intentions to stoke hate and the motivations of the neo-Nazi shooter who massacred 10 Black Americans at a Charleston, South Carolina church in 2015.

Haley also publicly criticised Trump during the 2016 Republican primary, calling on him to denounce his white supremacist supporters and release his tax returns. Haley endorsed Florida Sen. Marco Rubio during the 2016 primary and urged GOP voters not to support the party’s “angriest voices,” referring to Trump.

“I will not stop until we fight a man that chooses not to disavow the KKK,” Haley said at a campaign rally for Rubio. “That is not a part of our party. That’s not who we want as president. We will not allow that in our country.”

Trump hit back by claiming in a tweet that “the people of South Carolina are embarrassed of Nikki Haley!”

Haley has since been staunchly supportive of the president and his administration, stoking rumours that Trump would pick her to replace Vice President Mike Pence as his 2020 running mate. Haley is a rare woman of colour in the Republican party’s highest ranks, and is widely viewed as a future leader of the party.