If you are seeking an amusing yet disconcerting diversion from QE talk, please consider Lawmaker fined about $4,000 for insulting EU chief.

How much does it cost to tell the one of the EU’s top officials he has “the charisma of a damp rag?” About €3,000, or close to $4,000, as a European member of Parliament has discovered.

In 2010, Nigel Farage, an anti-European Union member of the EU Parliament, rose following a speech by Herman Van Rompuy, the president of the European Council. As Van Rompuy listened, Farage, a Briton, added that the former Belgian prime minister came from “pretty much a non-country.”

The Parliament docked Farage €2,980 — 10 days’ expenses. Farage appealed to the European Court of Justice. It ruled this month that he filed his appeal too late and would also have to pay Parliament’s legal expenses.

The decision was posted on the court’s website on Monday.

On August 8, 2012, Der Spiegel claimed Nigel Farage was Europe’s 7th most dangerous man. I think Farage is a hero and spelled out my own list in Europe’s Most Dangerous Politicians

Der Spiegel is Clueless and Dangerous

While the list does include some fascists and other questionable characters, the main “crime” against the collective group is they seek to end the euro.

In contrast, Chancellor Merkel is anything but a delusional idiot.

Rather, Merkel is an extremely skilled, as well as widely respected if not charismatic leader, with a seriously misguided notion there needs to be a European nannyzone super-state. Worse yet, she appears willing to sell her soul and the future of Germany to secure that outcome.

As noted above, nothing is more dangerous that ranking politicians on a mission to do the wrong thing, hoping to preserve their legacy.

Without a doubt, Merkel’s attributes make her the most dangerous politician in Europe.

A Note About Nigel Farage 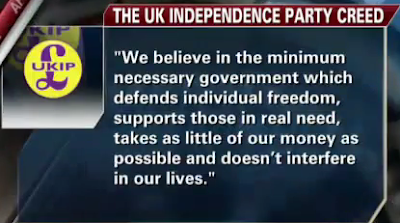 We believe in the minimum necessary government which defends individual freedom, supports those in real need, takes as little of our money as possible, and doesn’t interfere in our lives.

I think the Republican Party in the US should adopt that platform and that anything except a platform based on minimal government and individual freedom is dangerous.