Legendary NFL quarterback Terry Bradshaw broke down why he'd choose Patrick Mahomes over 'slow' Tom Brady, and why neither is the GOAT 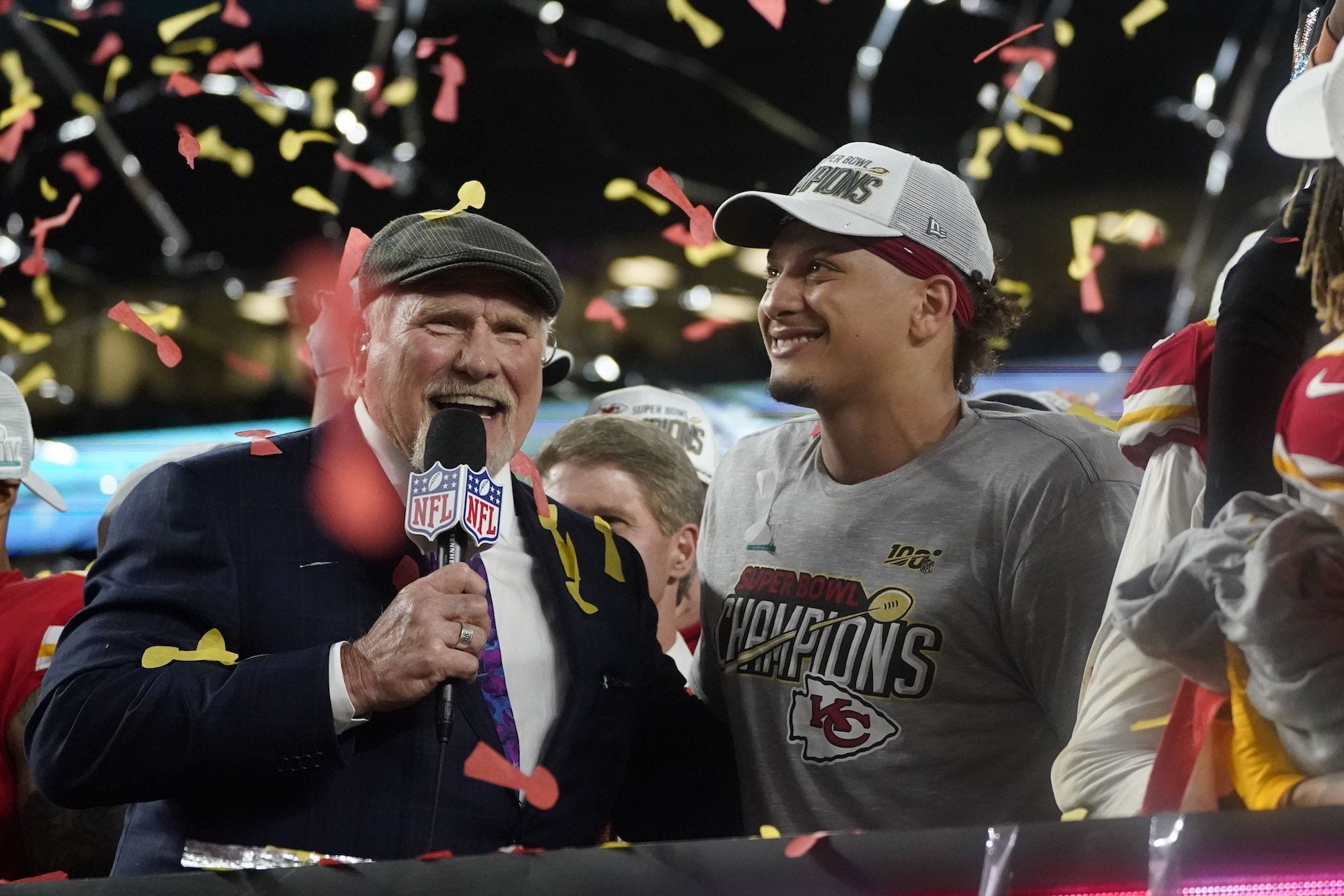 Getty/Timothy ClaryTerry Bradshaw is a big fan of Patrick Mahomes.

NFL legend Terry Bradshaw has told Insider that he’d pick Patrick Mahomes over Tom Brady, but that neither is the greatest quarterback of all time.

“They’re both incredible under pressure,” Bradshaw, who won four Super Bowl titles with Pittsburgh Steelers in the 1970s, told Insider when asked to compare the two superstar quarterbacks.

“The ability to come from behind. I would give the edge to Brady because in his seven Super Bowl wins, he went behind in every one of them, except for maybe one.”

Brady became the most decorated player in NFL history in February when he guided the Tampa Bay Buccaneers to victory over Mahomes’ Kansas City Chiefs at Super Bowl LV.

The 43-year-old helped the Bucs come from behind on the day to seal victory, just as he has done in five of his six other Super Bowl wins, which came with the New England Patriots.

“But that’s kind of where [the similarities] would stop,” said Bradshaw.

“Mahomes’ athletic ability, scrambling ability, running ability, arm location in a way to throw the football, is like nothing we’ve ever seen in our league.

“He’s probably the best quarterback I’ve seen in a while who’s able to go to the left and throw to the right, which is very difficult to do, or go to the right and really sling it back to the left.

“He’s a very gifted athlete at the quarterback position.” 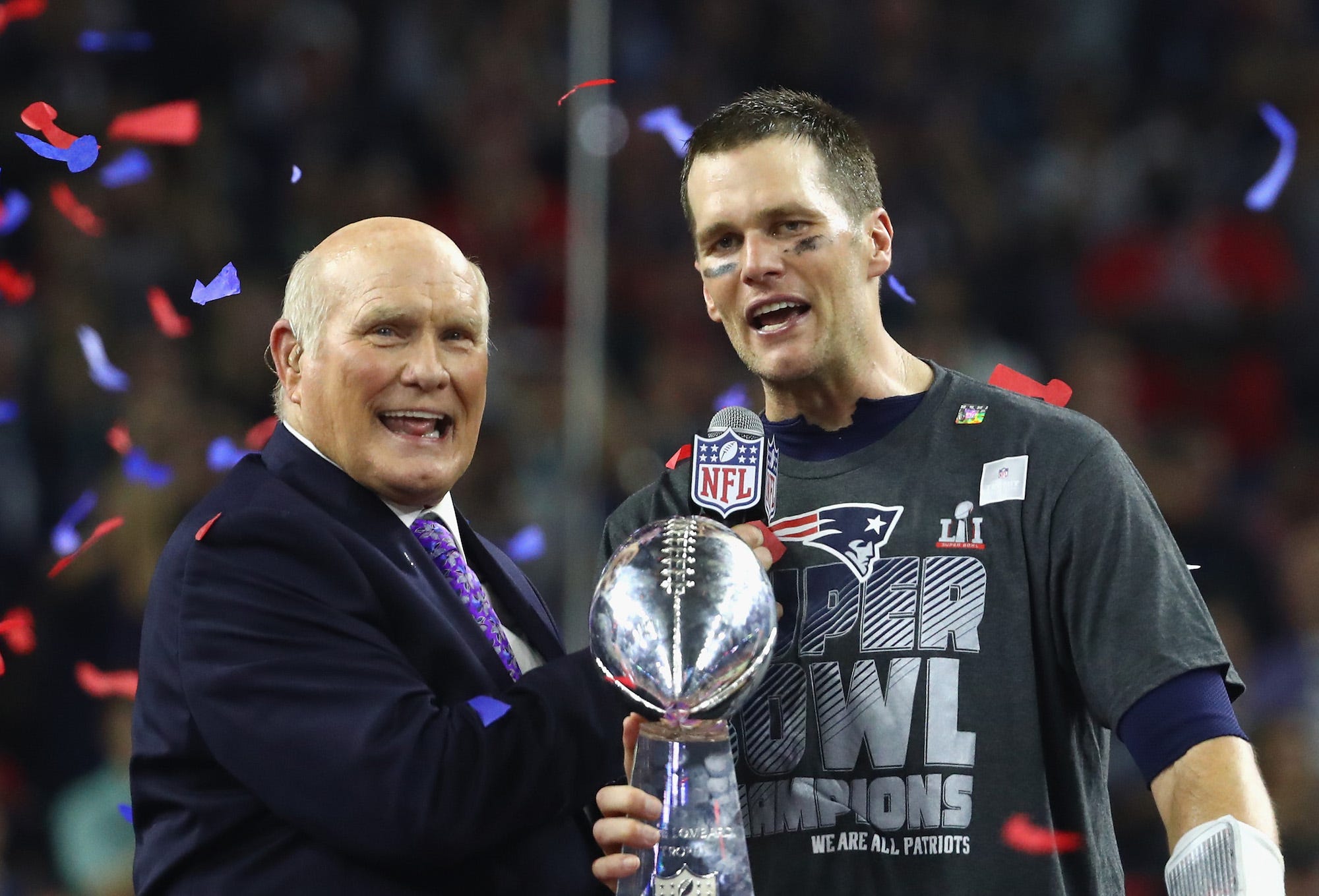 Getty/Al BelloBradshaw with Brady after the Patriots’ Super Bowl LI victory in 2017.

Bradshaw added that Brady simply cannot compete with Mahomes in terms of athleticism and ingenuity.

“Tom can’t go anywhere. Tom’s not strong – you can knock him down really easy. But when he’s upright, he’s spot on. He’s deadly accurate with the football.

“Which one would I take? If you say: ‘Terry, which one do you want on your team?’ I would want to take the young Mahomes over Brady.

“Mahomes can make things happen in a tough situation, and Tom can’t. He can’t move.”

Bradshaw says neither man is the greatest quarterback of all time.

In-fact, the 72-year-old, who recently became an ambassador for sandwich brand Schlotzsky’s, says there is no such thing.

“Tom Brady is not the greatest of all time,” he said.

“Do you know who Roger Staubach is?” he asked, referencing the Dallas Cowboys’ two-time Super Bowl winning quarterback in the 1970s.

“I can go back 30 years and name quarterbacks that I would take, that can be my quarterback anytime, including Mahomes.”

“I’ve said Tom was the greatest quarterback before. I said it one time, and I wish I hadn’t,” Bradshaw added, alluding to comments made after Brady’s most recent Super Bowl win with the Bucs.

“I would have no problem saying he’s the best that’s ever played the position,” Bradshaw said at the time.

Speaking to Insider, Bradshaw expressed his regret at that statement, saying his acheivements and the acheivements of Joe Montana are comparable to Brady’s.

“Brady has won seven, but he’s lost three. Four, four, and four if you subtract three. Bingo. There is no great one.”

Bradshaw spoke to Insider as part of his recent partnership with fast food brand Schlotzsky’s, which has recently released a new line of high protein sandwiches.