NFL players whose children followed in their footsteps 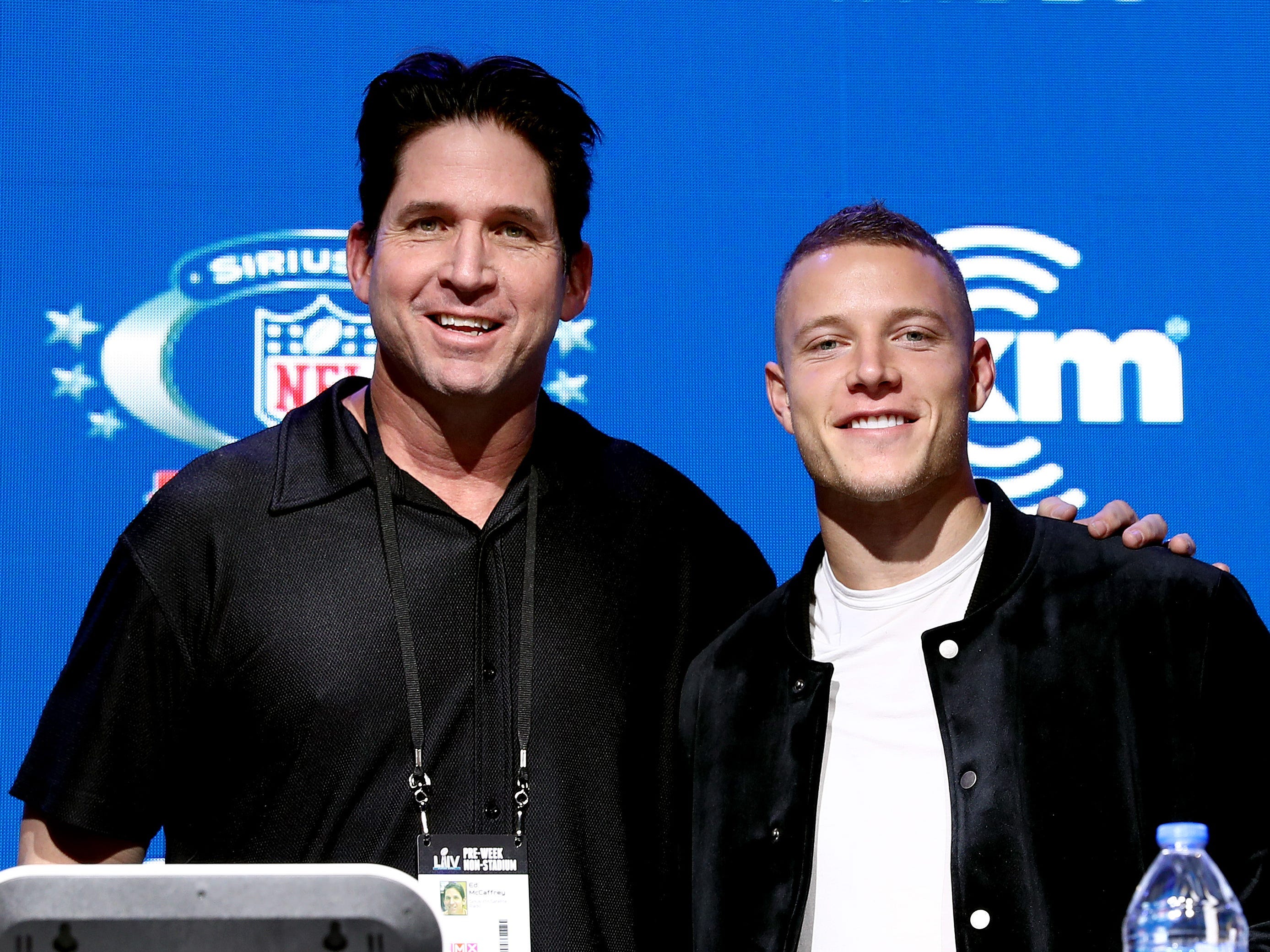 Cindy Ord/Getty ImagesEd McCaffrey and his son, Christian McCaffrey, in 2020.

Millions of kids dream of playing football in the NFL one day.

Yet some families have overcome those low odds multiple times: In fact, throughout the years there have been numerous players whose children have followed them to the NFL. There are even the “royal families” like the Mannings and Matthewses, and more low-key father-son duos like Terrence and DK Metcalf.

Keep reading to see NFL players whose kids followed in their footsteps to become football pros. 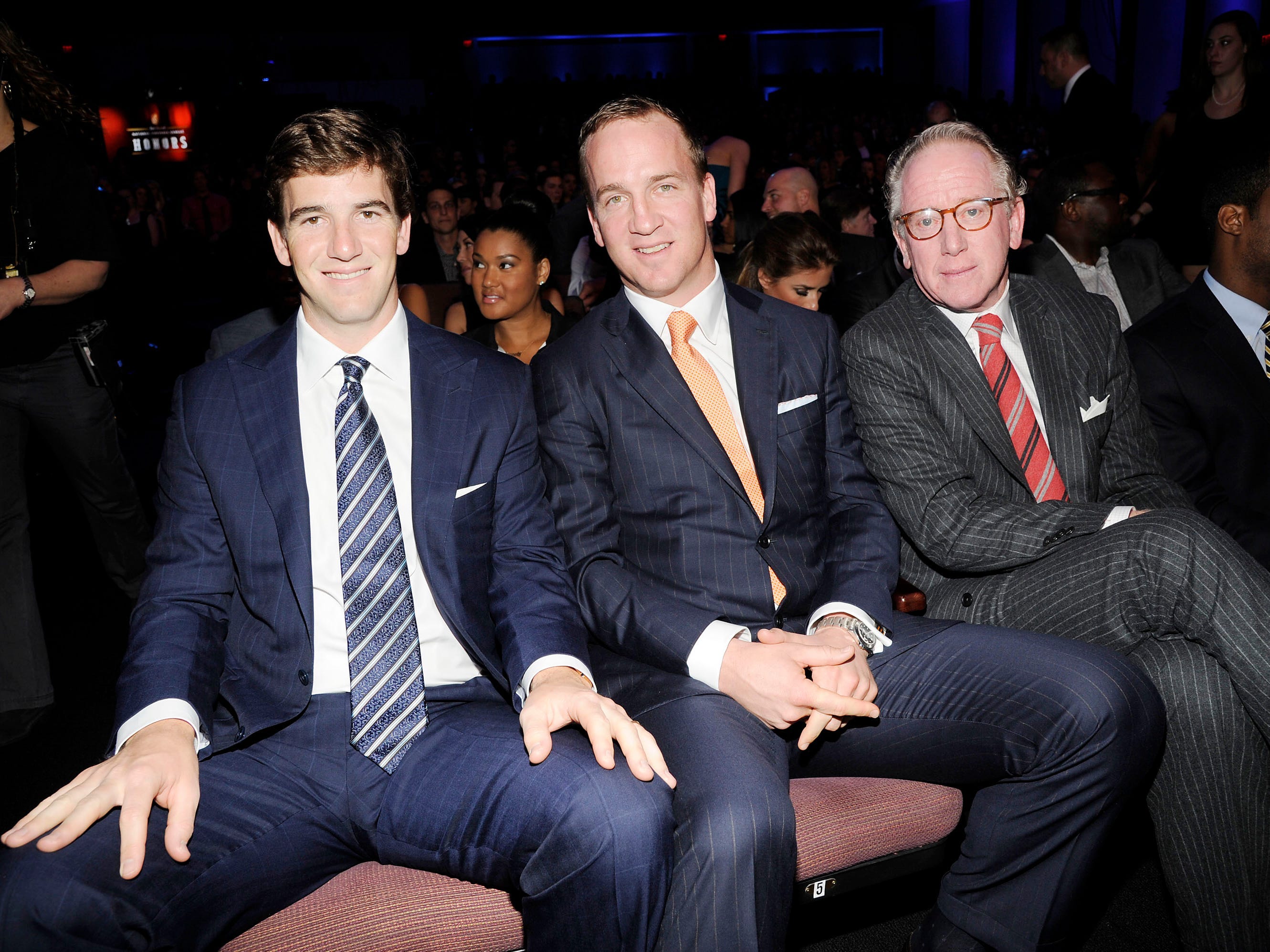 Kevin Mazur/Getty Images(Left to right) Eli, Peyton, and Archie Manning together in 2013.

Perhaps the most famous NFL family, the Mannings have created an impressive legacy.

Archie Manning played quarterback for 13 seasons between 1971 and 1984; his longest tenure being with the New Orleans Saints, though he played briefly for both the Houston Oilers and Minnesota Vikings. Though he never won a Super Bowl, he was selected for two Pro Bowls and named a first team All-Pro twice.

Archie’s second son, Peyton, is one of the most beloved and accomplished quarterbacks in NFL history. During his 17-year career, he won a Super Bowl championship with the Indianapolis Colts in 2006 and another with the Denver Broncos in 2015. He won numerous awards including Offensive Player of the Year, MVP, and the Walter Payton NFL Man of the Year.

Eli, the youngest son, also won two Super Bowl championships, both with the New York Giants in 2008 and 2012. Throughout his 16-season tenure with the Giants, Eli was selected for four Pro Bowls and also won the Walter Payton NFL Man of the Year Award.

Who knows, the Manning family’s dynasty could extend into a third generation if Arch Manning – Archie’s grandson via his eldest son, Cooper – is drafted to the NFL. He is currently ranked as the No. 1 quarterback of the 2021 high school class, according to 247 Sports.

The Matthews family has produced three generations of NFL players. 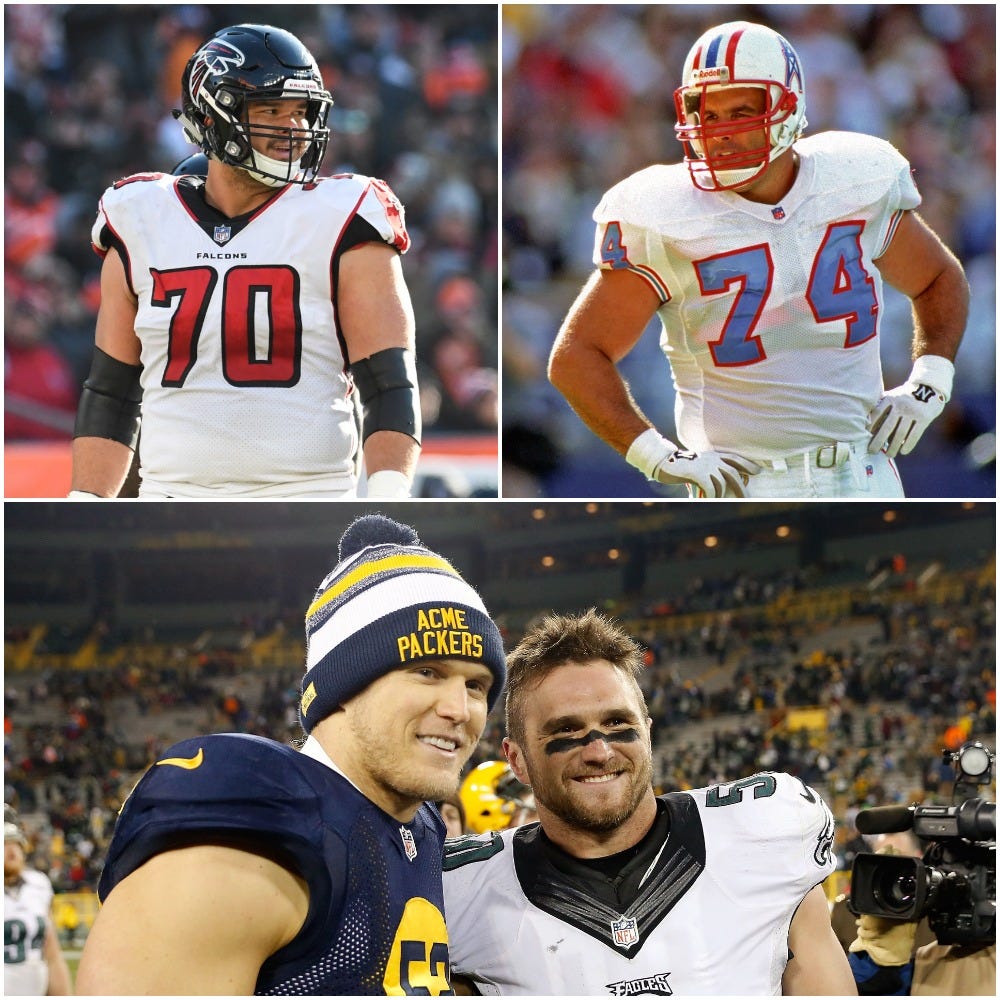 Clay Matthews Sr., who played for the San Francisco 49ers in the 1950s, is where the lineage starts. His sons Clay Jr. and Bruce were both drafted in the first round – Clay played linebacker for the Cleveland Browns and Atlanta Falcons; Bruce played as an offensive lineman for the Houston Oilers/Tennessee Titans.

Clay Jr.’s son, linebacker Clay III, a first-round pick like his father, played 10 seasons with the Green Bay Packers and one with the Los Angeles Rams before becoming a free agent this season. His brother, Casey, also a first-round pick, played four seasons as a linebacker for the Philadelphia Eagles and one for the Minnesota Vikings. The Philadelphia Eagles selected their cousin Jake (Bruce’s son), offensive tackle, No. 6 overall in the 2014 draft. Jake’s brother, Kevin, played centre for three seasons with the Tennessee Titans and then the Carolina Panthers.

Jake is the only member of the Matthews family who played in the 2020-21 NFL season. Together, the Matthews family has collectively played over 900 games, been selected to over two-dozen Pro Bowls, and has earned multiple first team All-Pro selections.

Three-time Super Bowl champion Ed McCaffrey’s son Christian is considered by some to be the best running back in the NFL.

Cindy Ord/Getty ImagesEd McCaffrey and his son, Christian McCaffrey, in 2020.

Ed McCaffrey played for 13 seasons between 1991 and 2003 as a wide receiver in the NFL – he played with the New York Giants, San Francisco 49ers, and the Denver Broncos. Ed won a Super Bowl ring with each team and finished his career having played 185 games and scoring 55 touchdowns.

His son, Christian, is currently the Carolina Panther’s star running back. Since Carolina drafted him No. 8 overall in the 2017 NFL draft, McCaffrey has set numerous NFL and franchise records, including pulling in 116 receptions – the most in league history -in 2019. The same year he became the third player in NFL history to tally over 1,000 rushing and 1,000 receiving yards.

Former Miami Dolphins defensive end John Bosa has two sons, Joey and Nick, who are currently playing in the NFL. 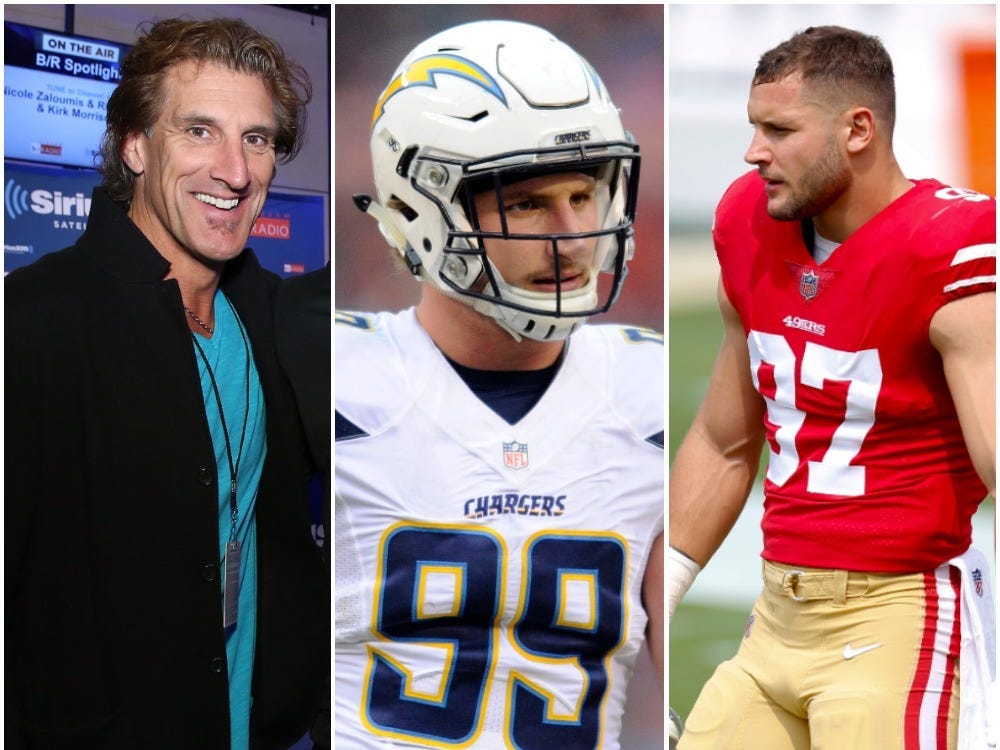 John Bosa’s NFL career may have only lasted three seasons, but his passion for the sport clearly left an impression on his sons: Joey and Nick both became defensive ends and were selected in the first round of the NFL draft.

Joey was drafted third overall by the then-San Diego Chargers in the 2016 NFL draft and has since become one of the team’s standout defensive players. Joey plays defensive end and won Defensive Rookie of the Year after his first season.

Nick, the younger Bosa brother, was drafted second overall by the San Francisco 49ers in the 2019 NFL draft and played in, but ultimately lost, Super Bowl LIV in 2020.

John Bosa told WPLG Local 10, a news station in his hometown of Fort Lauderdale, Florida, that seeing Nick play in the Super Bowl was “pretty cool.”

“Sometimes I kind of have to pinch myself it’s just, it’s amazing,” the eldest Bosa said.

Two of former Raider Howie Long’s three sons have played in the NFL. 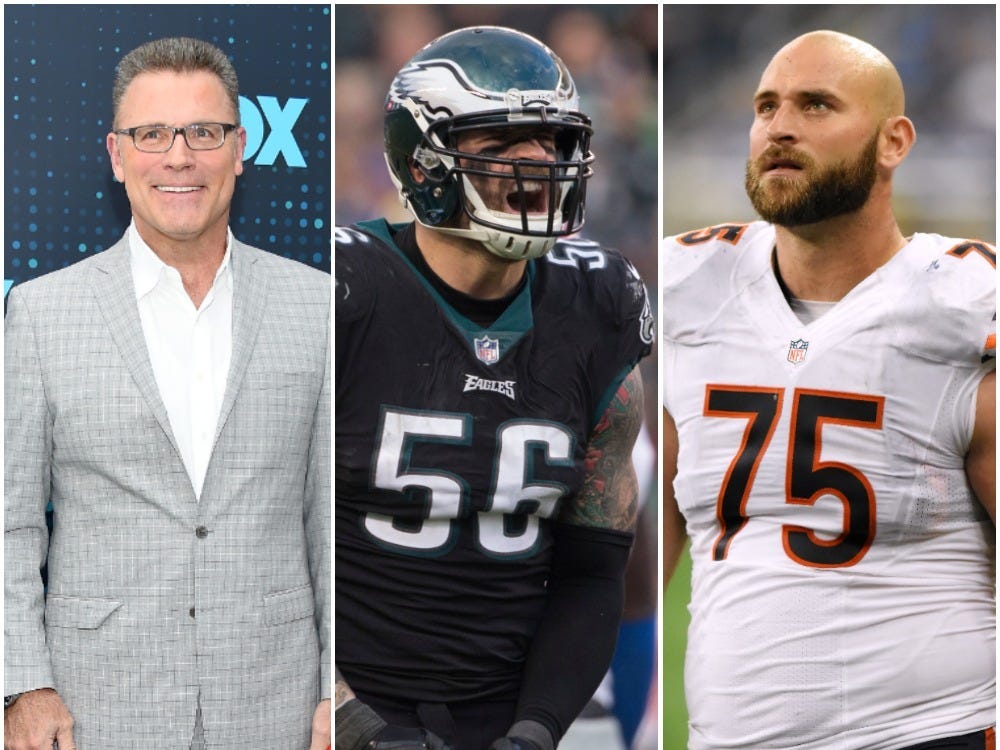 Long before Howie Long became a mainstay of Fox’s commentator team, he played 13 seasons between 1981 and 1993 with the Raiders. He won a Super Bowl championship with the Raiders in 1984, was inducted into the Pro Football Hall of Fame in 2000, and has appeared in multiple TV series.

Two of the defensive end’s three sons, followed in their dad’s NFL footsteps.

The eldest, Chris, is a retired defensive end who spent 11 years in the NFL and won two Super Bowls – one with the New England Patriots in 2017 and another with the Philadelphia Eagles in 2018. Kyle, Howie’s middle child, spent seven years playing guard for the Chicago Bears and was selected to the Pro Bowl three times. 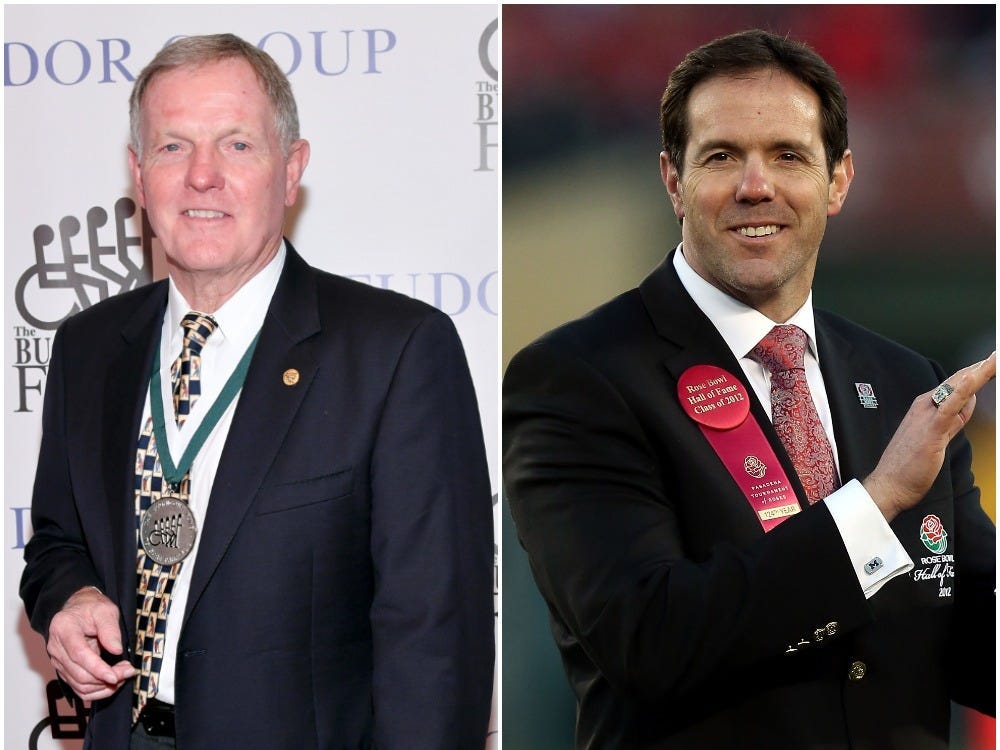 Bob Griese has the unique distinction of quarterbacking the only team to go undefeated in the regular season and then win the Super Bowl. In addition to that miraculous 1972 season, Bob led the Dolphins to another championship the following year and earned myriad awards, culminating with his induction into the Pro Football Hall of Fame in 1990.

Bob’s son, Brian, also played quarterback and won a Super Bowl ring his rookie year with the Denver Broncos – though John Elway was playing quarterback, Brian was the backup. Throughout his 11-year career, Brian also had stints playing for Tampa Bay, Chicago, and Miami. In August 2020, Brian was named a Monday Night Football analyst. 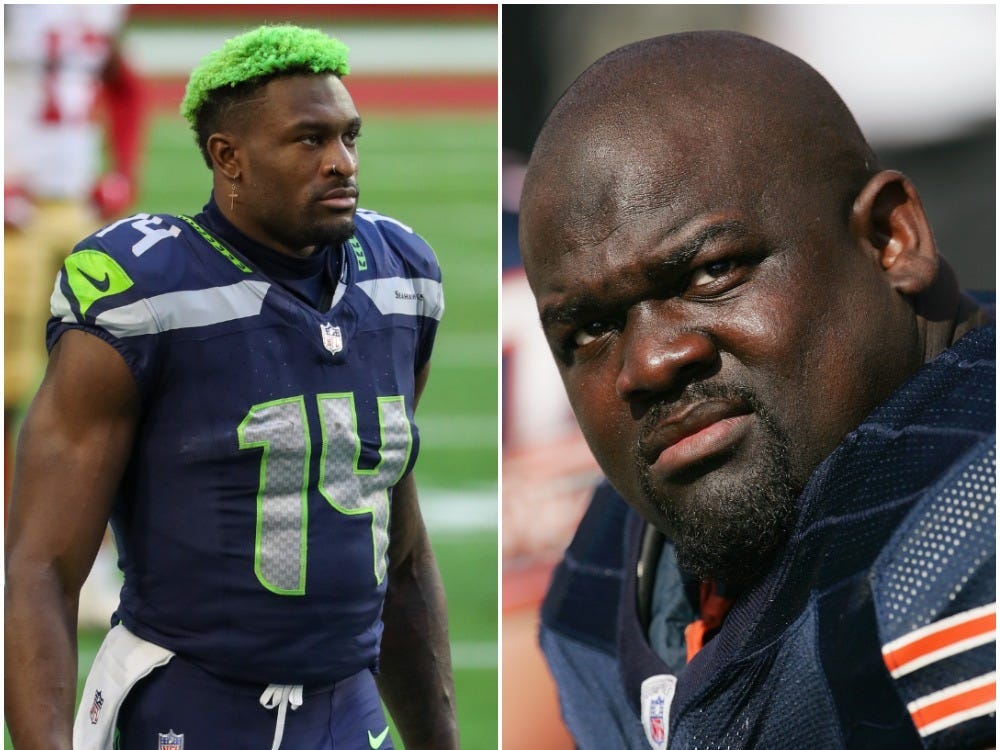 Terrence Metcalf played with the Chicago Bears between 2002 and 2008. When he failed to find a team after his time with the Bears, he retired and shifted his focus toward preparing his son, DK, for the NFL. He told the Clarion Ledger in 2015 that he got the help of former Bears safety Bobby Grey to train DK when he was in elementary school.

“At that age when you’re a parent trying to train your child, they don’t want to listen to you, so you get them with someone else. … The things he remembers helped him become a better receiver,” Metcalf said. “He remembers all of the passing routes he was taught by the guys in the NFL.”

His hard work paid off. After a decent rookie season in 2019, DK has become Seattle’s star receiver. So far this his season, he’s hauled in 83 receptions for 1,303 yards and 10 touchdowns. DK went viral after chasing down Arizona Cardinals tackle Budda Baker to prevent a full-field pick six.

Randy Moss’ son Thaddeus is hoping to follow in his father’s legendary footsteps. 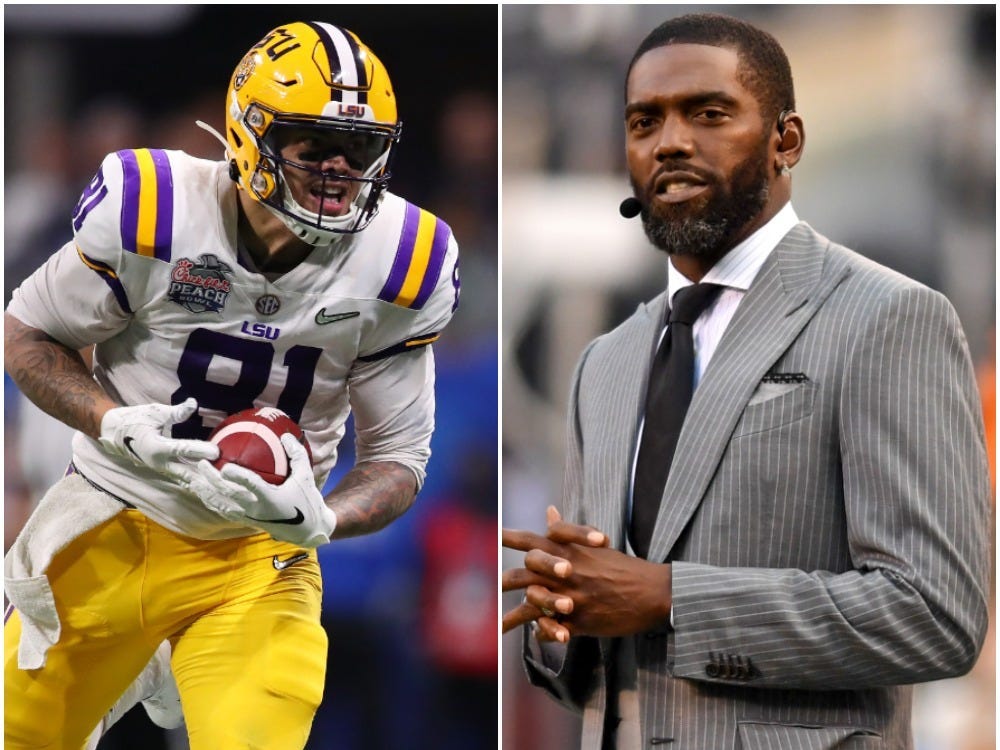 After winning a College Football Playoff National Championship in 2020 at LSU, Thaddeus Moss is hoping to have just as memorable an NFL career as his dad. Thaddeus, a tight end, was picked up by the Washington Football Team as a free agent in April 2020 but released in August.

Randy’s jaw-dropping catches inspired the phrase “getting mossed,” which is when a receiver makes a spectacular catch (usually one-handed or jumping) in Randy Moss fashion, despite being defended well. 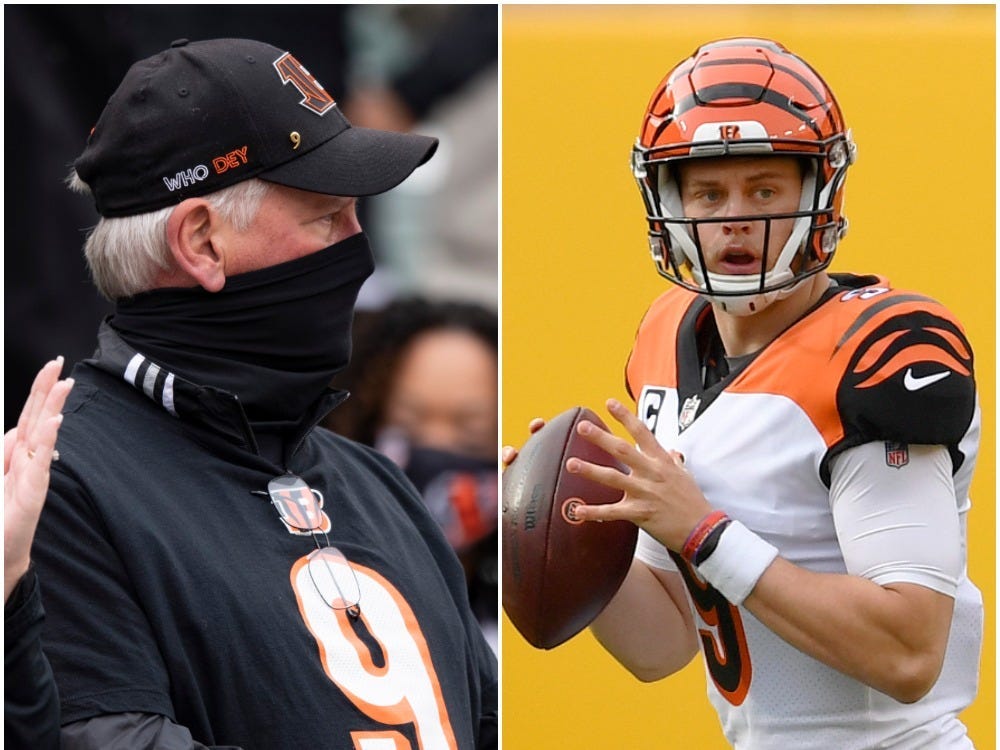 Jim Burrow was drafted by the Green Bay Packers in 1976 but after playing just three games with the team, he headed north to join the Canadian Football League’s Montreal Alouettes. Jim played in the CFL for five seasons, during which he was named East Division all-star twice and won the Grey Cup (the equivalent to a Super Bowl) in 1977. He is now a coach at Ohio University.

Joe has wasted no time following and, by all means, surpassing his father’s legacy. The younger Burrow won the 2019 Heisman Trophy and went on to be selected No. 1 overall in the 2020 draft by the Cincinnati Bengals. Unfortunately, Burrow suffered a torn ACL in week 11, which prematurely ended his rookie season.

49ers head coach Kyle Shanahan is looking to channel some of his father Mike’s legendary success. 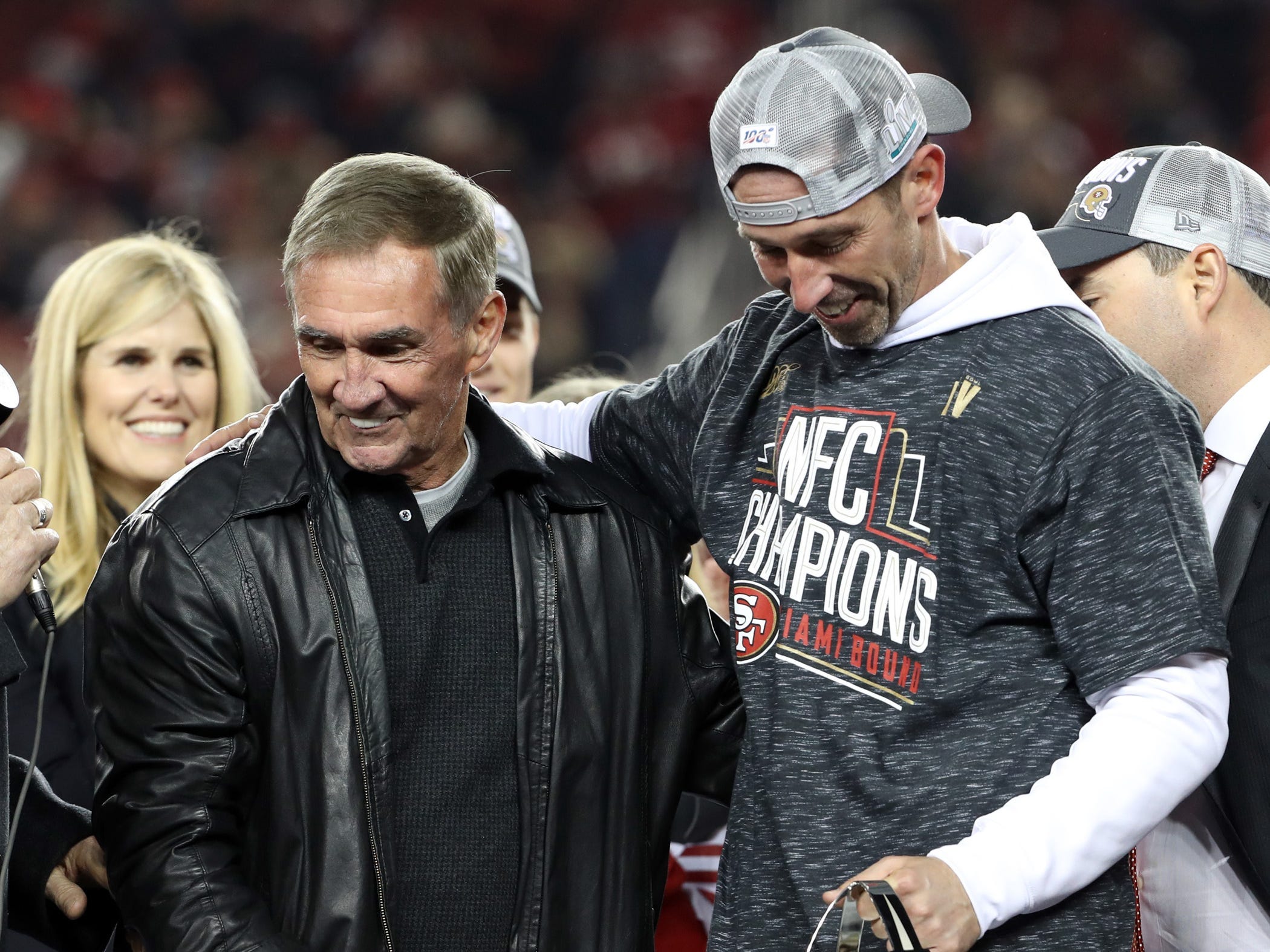 OK, technically the Shanahans are coaches, not players, but this father-son duo still deserves some attention.

Mike Shanahan is one of the most legendary coaches in NFL history. Fourteen of Mike’s 20 years of coaching were spent with the Denver Broncos, which he led to back-to-back Super Bowl championships in 1998 and ’99.

His son Kyle took over as head coach of the San Francisco 49ers – where Mike was once offensive coordinator – in 2017 and led the team to the Super Bowl in 2020.

Both of Super Bowl XXI MVP Phil Simms’ sons made careers as quarterbacks in the NFL. 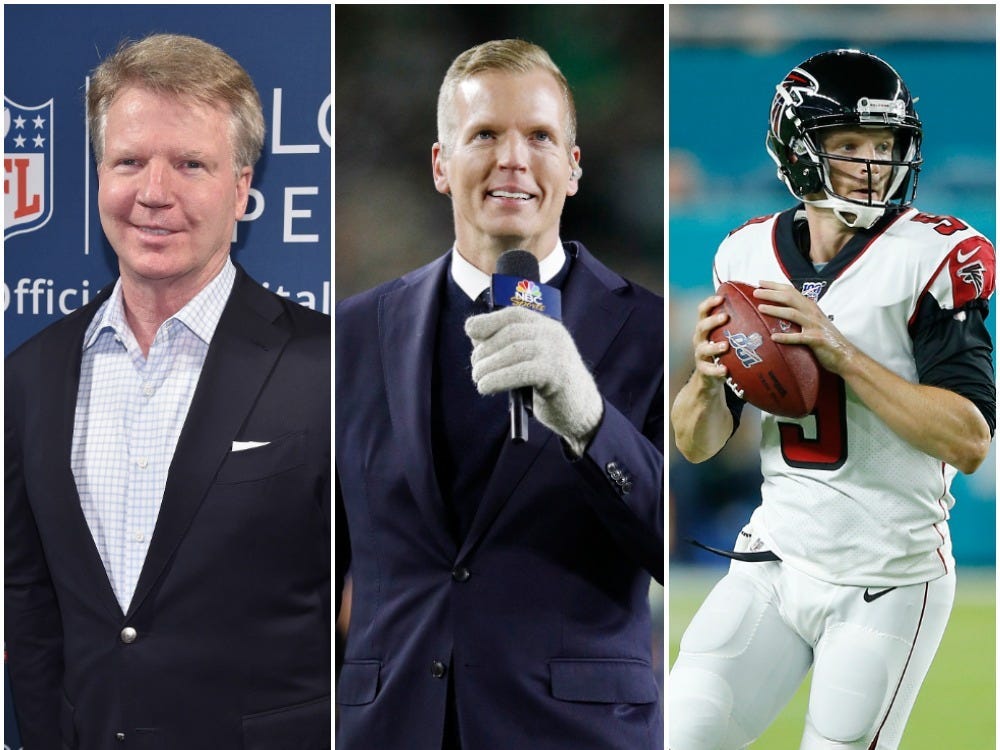 Phil Simms spent his entire 15-year NFL career as quarterback of the New York Giants and won two Super Bowl championships in 1987 and 1991. He was named MVP during the former after completing 88% of his passes, a record that has yet to be bested by another QB. After retiring, Phil became a commentator and analyst and currently works for CBS.

His eldest son, Chris, played quarterback between 2003 and 2010 for Tampa Bay, Denver, and Tennessee. He is now an NFL and college football analyst/commentator for NBC. Matt, Phil’s younger son, played QB for the New York Jets in 2013 and 2014, and for the Atlanta Falcons in 2019. He is currently a free agent. 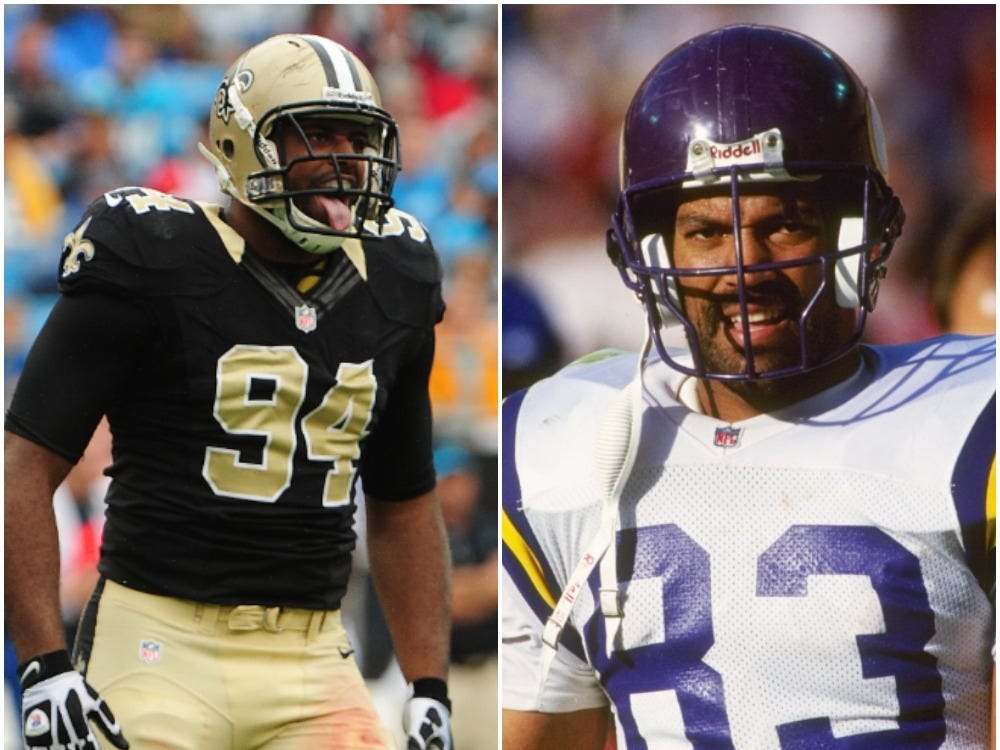 Cam Jordan is one of the best defensive ends currently playing in the league. During his 10 seasons with the New Orleans Saints, the first-round draft pick has accumulated 94.5 sacks, made 346 tackles, forced 11 fumbles, and been named to six Pro Bowls.

His father, Steve Jordan, had an equally impressive career as a tight end for the Minnesota Vikings. Steve played 13 seasons for the Vikings between 1982 and 1994, hauling in 28 touchdowns and over 6,300 yards. Like his son, he was also selected to six Pro Bowls and in 2019, he entered the Vikings Ring of Honour.

Former Colts QB Andrew Luck inherited some of his skills from dad Oliver, who played QB for the Houston Oilers.

Oliver Luck only played QB for the Oilers from 1983 to 1986 before leaving the NFL to become a businessman. In 2018, Oliver was named commissioner and chief executive officer of the XFL, the more “extreme” version of the NFL that has since been suspended due to the pandemic.

After being drafted first overall by the Indianapolis Colts in 2012, Andrew Luck turned the previously 2-14 Colts into an 11-5 playoff team. In the process, he set the rookie records for most passing yards in a season (4,374) and a game (433). He also broke Peyton Manning’s 2010 franchise-record 4,700 yards in a season with 4,761 and made the Pro Bowl four times.

Andrew Luck was one of the more promising quarterbacks of the last decade, who many thought retired early while he was still in his prime. After eight seasons with the Colts and a string of injuries, Luck announced his retirement in 2019, at age 29, citing that he was “mentally worn down, and now checking out.”