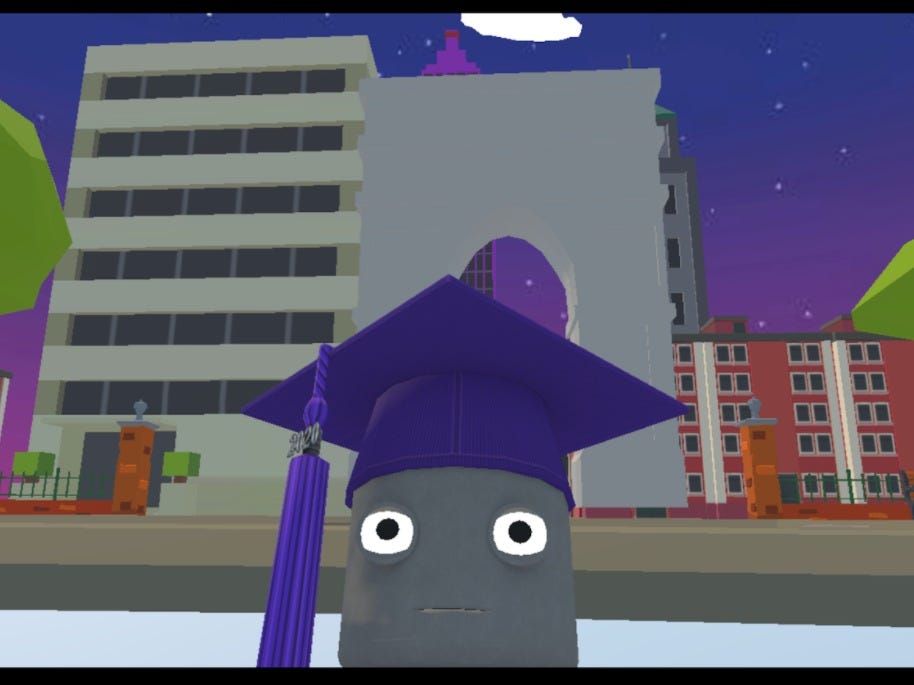 Universities around the world have cancelled, postponed, or modified graduation plans due to the coronavirus pandemic. But as far as I know, my school, New York University, was the first to host a virtual reality graduation party. 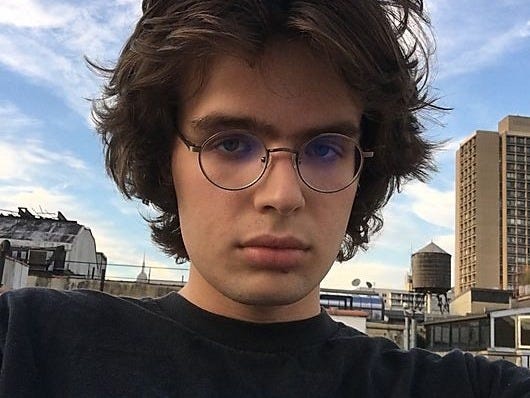 On the day before graduation during years when there aren’t deadly pandemics, NYU typically hosts a “grad alley” celebration, a massive block party in Manhattan’s Washington Square Park. But since New York City is still under lockdown and NYU students like me have dispersed across the world, the university wanted to find a way to let graduates “make some last NYU memories together,” according to an official NYU email. 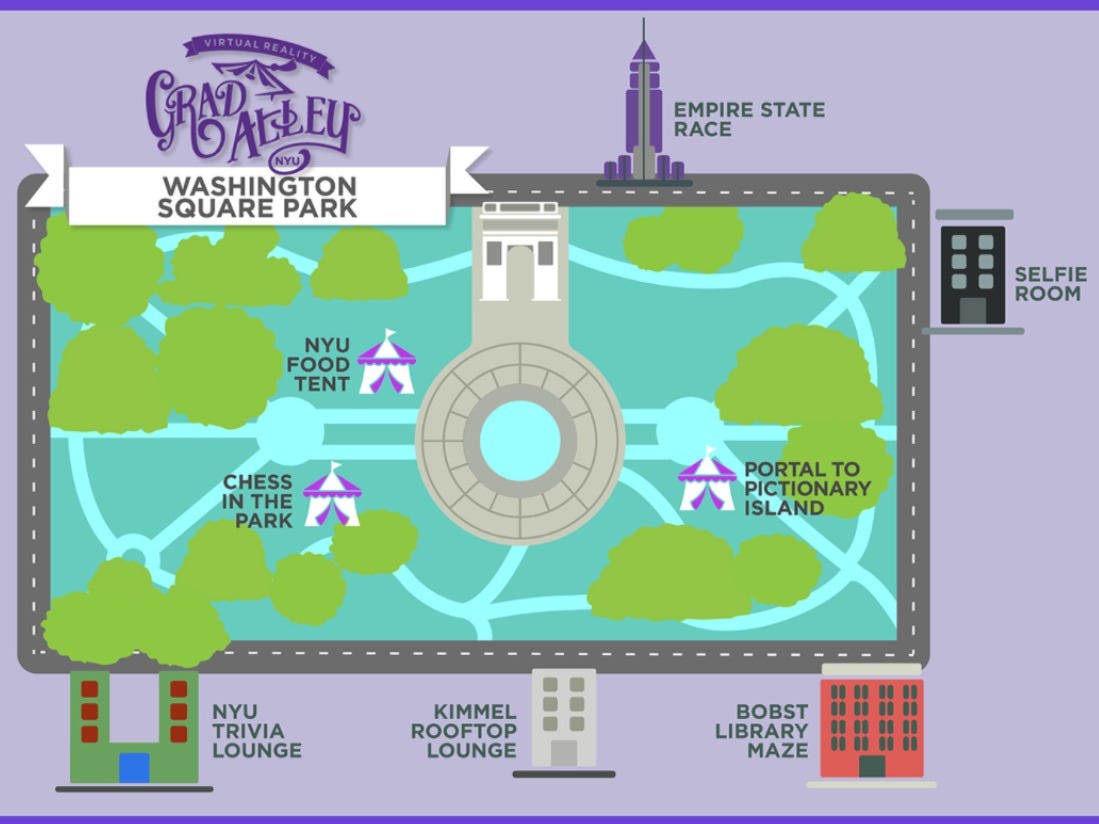 The result was this Tuesday’s “Virtual Reality Grad Alley,” a bizarre online experience where young people graduating into the worst job market since the Great Depression could fly angry-looking avatars around blocky, low-res versions of the Empire State Building, the Statue of Liberty, and the Washington Square Arch. It was supposed to be a pre-party for Wednesday’s 25 minute-long livestreamed commencement ceremony. 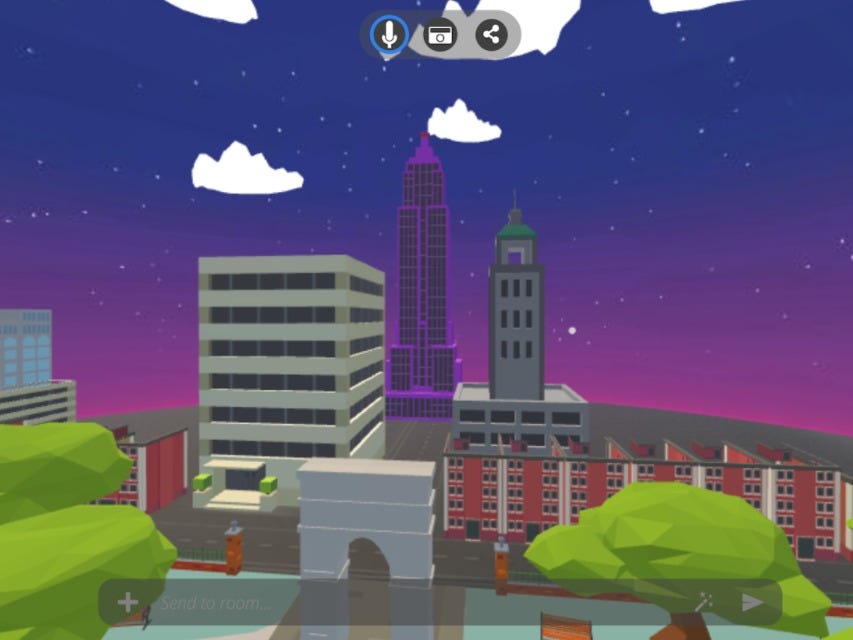 Theo WaytA perspective from the top of NYU’s Bobst Library.

The browser-based program was compatible with VR headsets, computers, tablets, and phones. It was open only to members of the class of 2020 from the hours of 5 to 9 p.m. E.T., and we logged on through our school emails. 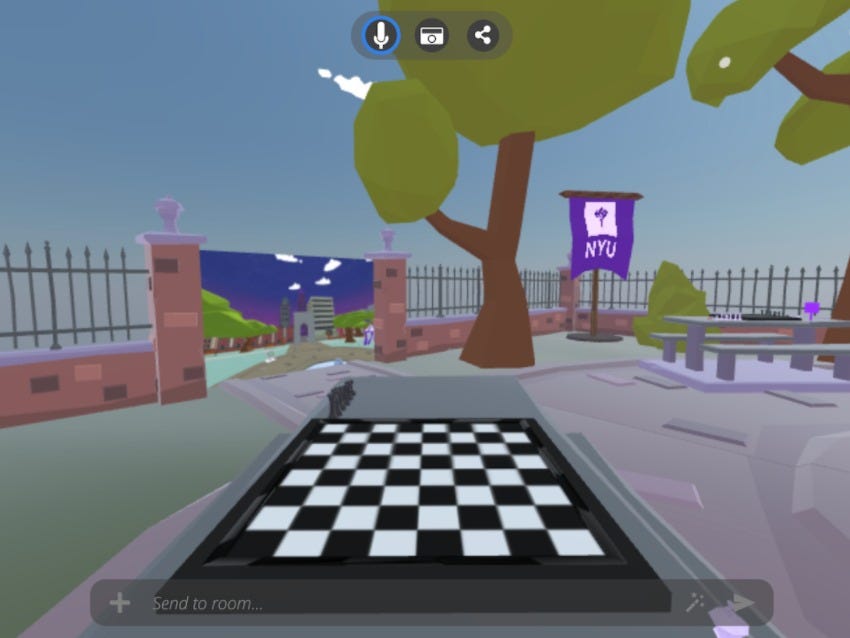 But few members of my graduating class actually showed up, making NYU’s digital version of New York almost as empty and creepy as the city itself.

We chose our avatars to walk around in 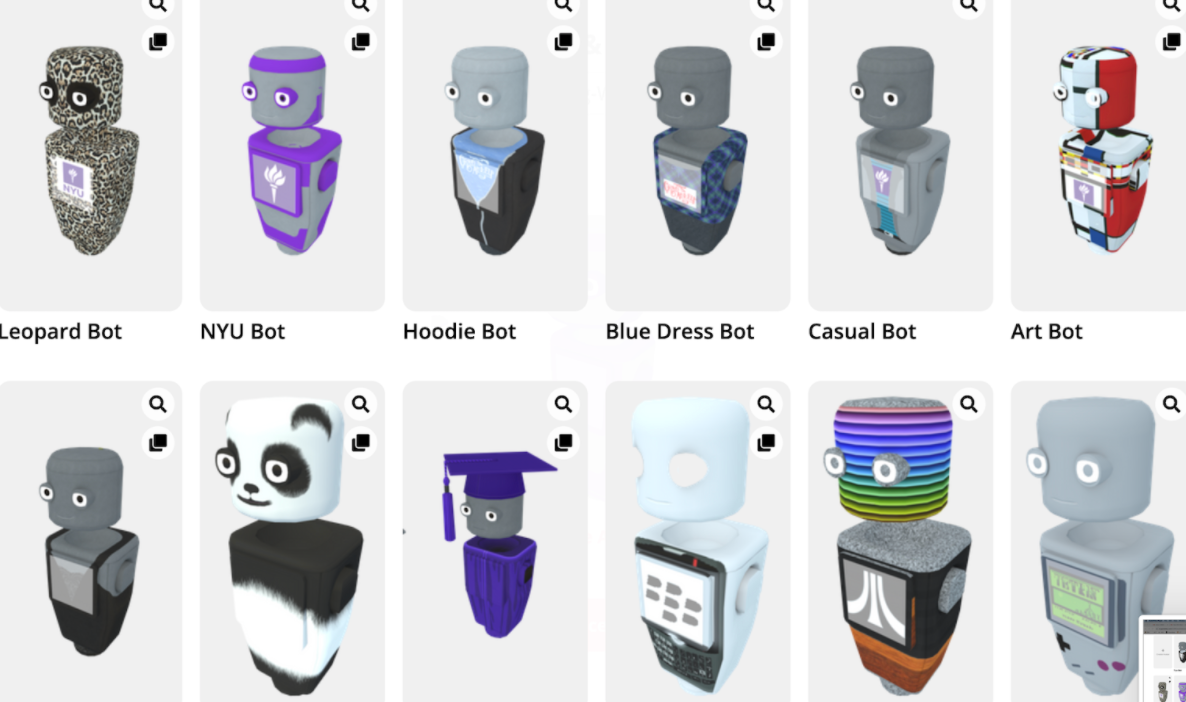 Theo WaytSome of my avatar options.

After I logged on through my school email, I was asked to choose an avatar. Options included a leopard print outfit, a hoodie, and a panda. But since I wasn’t able to don a purple NYU graduation robe IRL, I chose an avatar that was wearing one.

I was then dropped into an empty Washington Square Park. I flew my avatar around, listening to the game’s soundtrack: ambient city traffic sounds and a melancholy harp.

But I did meet someone new 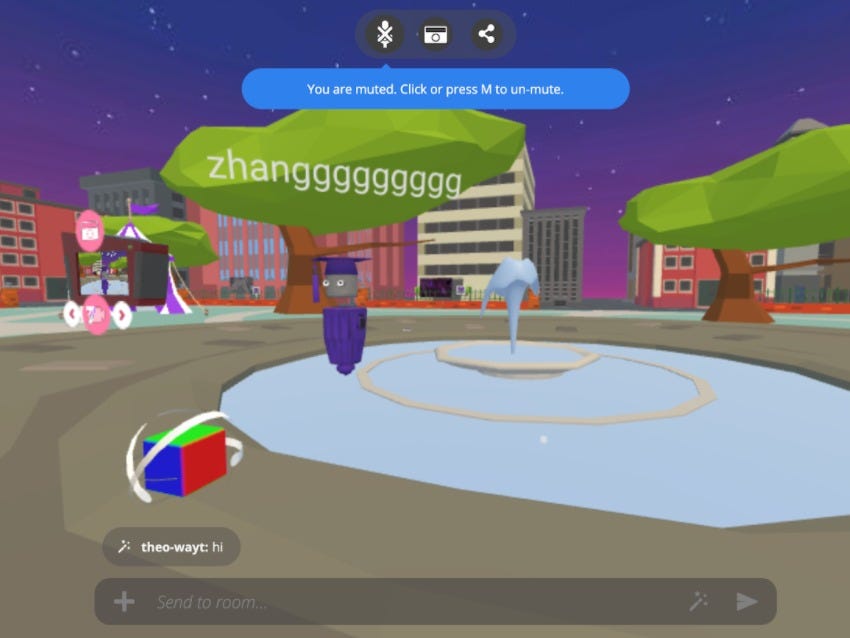 After a few minutes, another member of the class of 2020 joined my server. Their display name was “zhanggggggggg,” and they had chosen the same purple-robed avatar as me. I decided to chat them up. 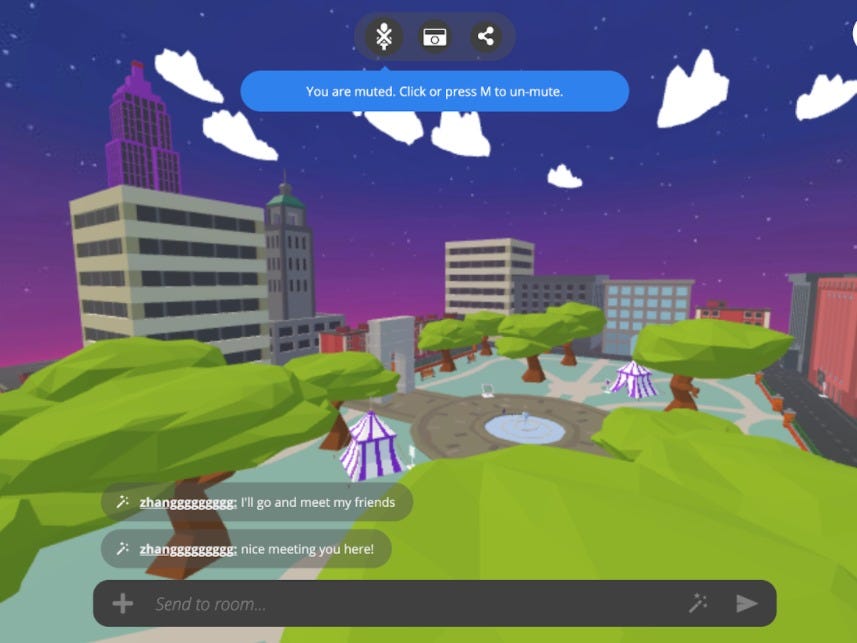 “same here. i thought there would be more people lol,” they replied.

I asked where zhanggggggggg was logging in from, and they said they were still in New York City.

“have you been to the real life washington square recently?” I asked. I was hundreds of miles away in my childhood bedroom in Memphis, Tennessee.

“how does it compare?”

“still a lot of ppl. hanging out. skateboarding. singing. performing. just like the old days.” 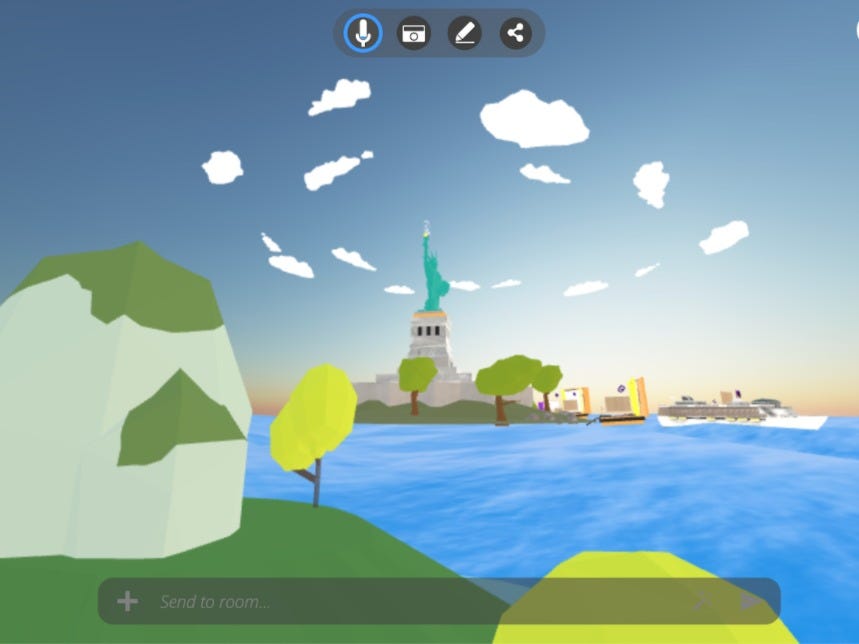 Zhanggggggggg’s purple avatar disappeared. Alone once again, I decided to check out the Statue of Liberty.

No one was there.

Same for our school library, a trivia lounge, and a rooftop dance club next to a purple Empire State Building 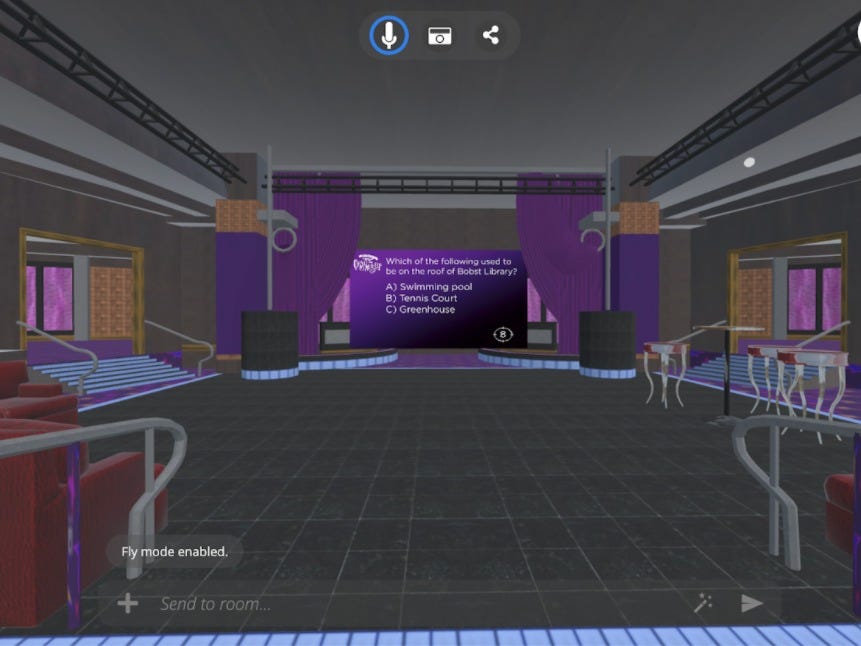 Other members of the class of 2020 I spoke to agreed 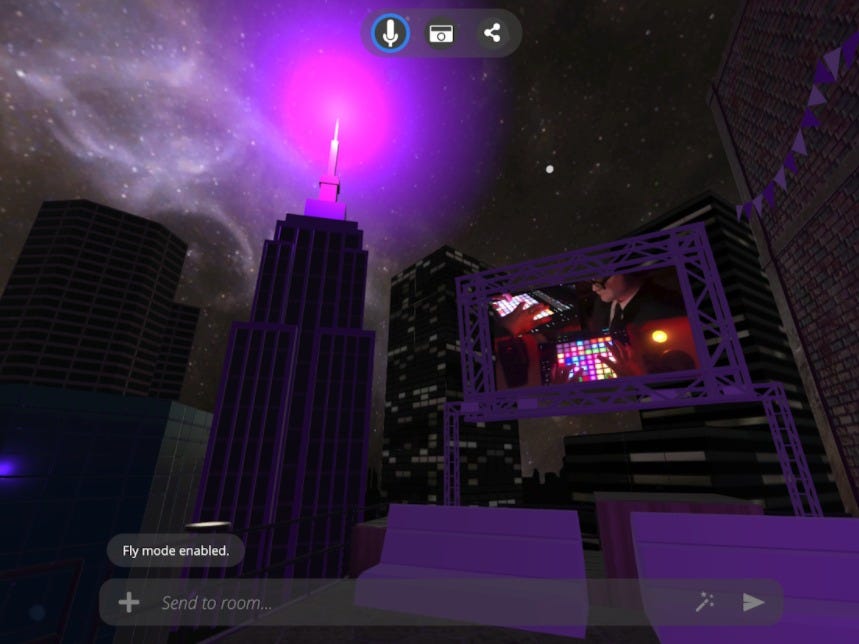 “It was just very Black Mirror and dystopian,” said Nicole Rosenthal, 21, a journalism and psychology double-major from Long Island, NY. “You’re trying to simulate being ‘there’ and having all these cathartic feelings but it just doesn’t translate.”

Rebecca Karpen, a 22-year-old who studied “populist rhetoric and the crisis of narrative,” also criticised the event. “I was only able to convince one friend of mine to join,” Karpen said. “Everyone else either wasn’t interested, had technical difficulties, or had gone on it and hated it. There was no one there.”

Karpen grew up in Greenwich Village near Washington Square Park and was quarantining with her family nearby. “It’s weird for me,” she said. “I can still access the actual grad alley anytime I want, even if it is in a mask.”

Attendance at the event was underwhelming 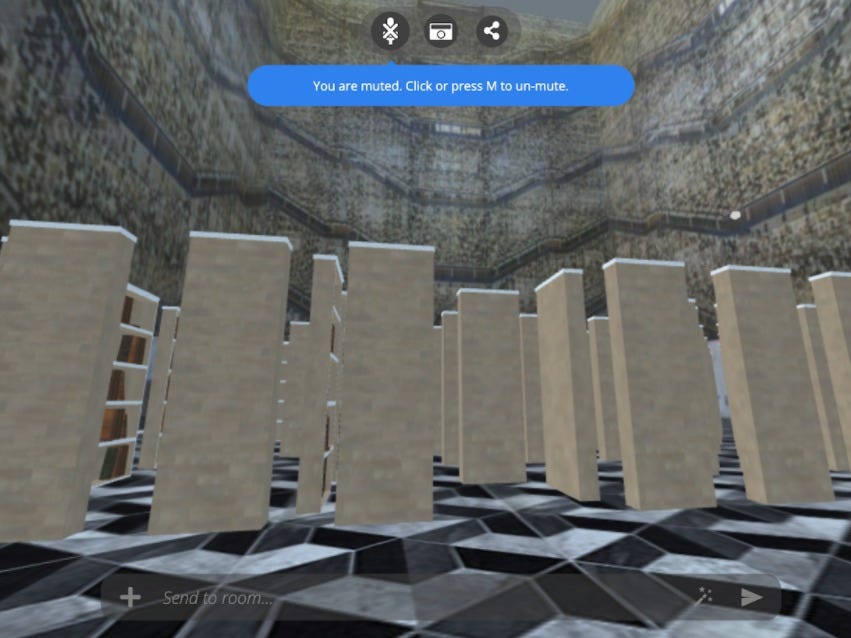 According to a press release from Jump Into The Light, the studio that developed the VR grad alley for NYU, “many thousands of students” were expected to attend. Yet throughout the four hour event, I never observed more than two hundred students logged on at once.

“It feels wrong for me to partake in a virtual graduation ceremony for people, myself included, who will likely not make the world run much smoother,” Miritello said. He explained that the coronavirus pandemic is making “fundamentally inapplicable abstract humanities topics” taught at NYU seem trivial in comparison to the work of essential workers like grocery store clerks, truckers, and pharmacists.

Students have criticised NYU’s response to COVID-19 in general 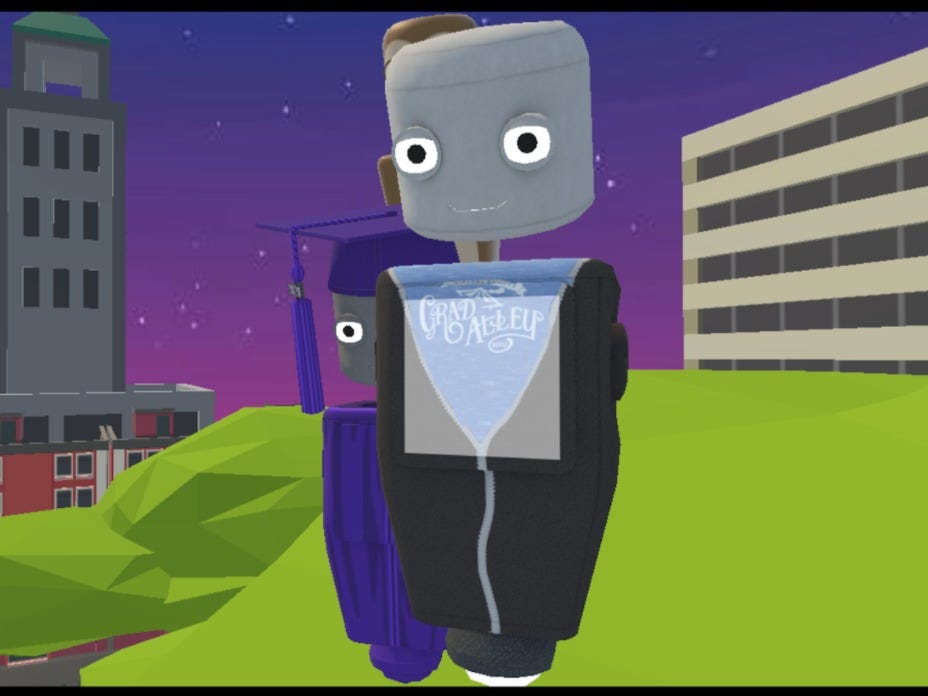 It’s unclear how much NYU paid Jump Into The Light, which developed the event alongside NYU’s Visual Storytelling Team and a group of students. But the university’s coronavirus response has come under fire from graduate student groups demanding increased summer stipends, extra degree funding, and additional assistance for international students, according to Gothamist.

In response to NYU’s announcement of the VR grad alley, graduate student group “Sick-Out NYU” tweeted, “Ummmmm…. we would LOVE to know how much these grim avatars cost.”

NYU spokesperson Shonna R Keogan praised the event as one of the largest interactive VR events ever to date, but did not say how much it cost to produce.

Waiting for a graduation IRL 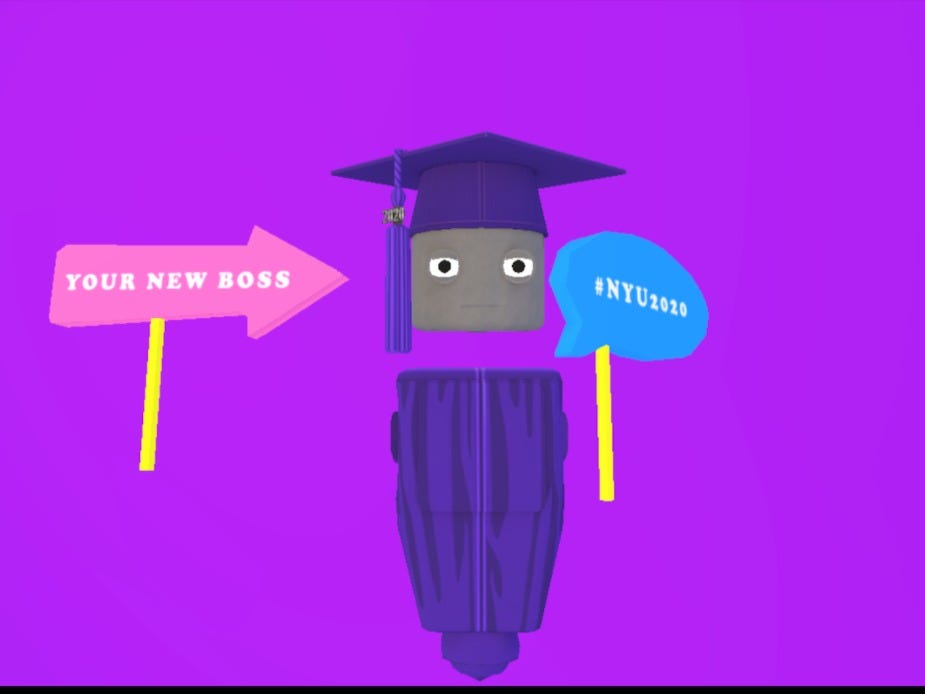 The NYU administration has told students there will be an IRL commencement ceremony once the coronavirus pandemic passes. I plan on attending. Until then, I have screenshots of my purple-robed avatar. I wish he didn’t look so sad.

This story has been updated with a comment from a NYU spokesperson.

Theo Wayt is a reporter who’s written for the Associated Press, NBC News, The New York Post, Vice, and Gothamist.