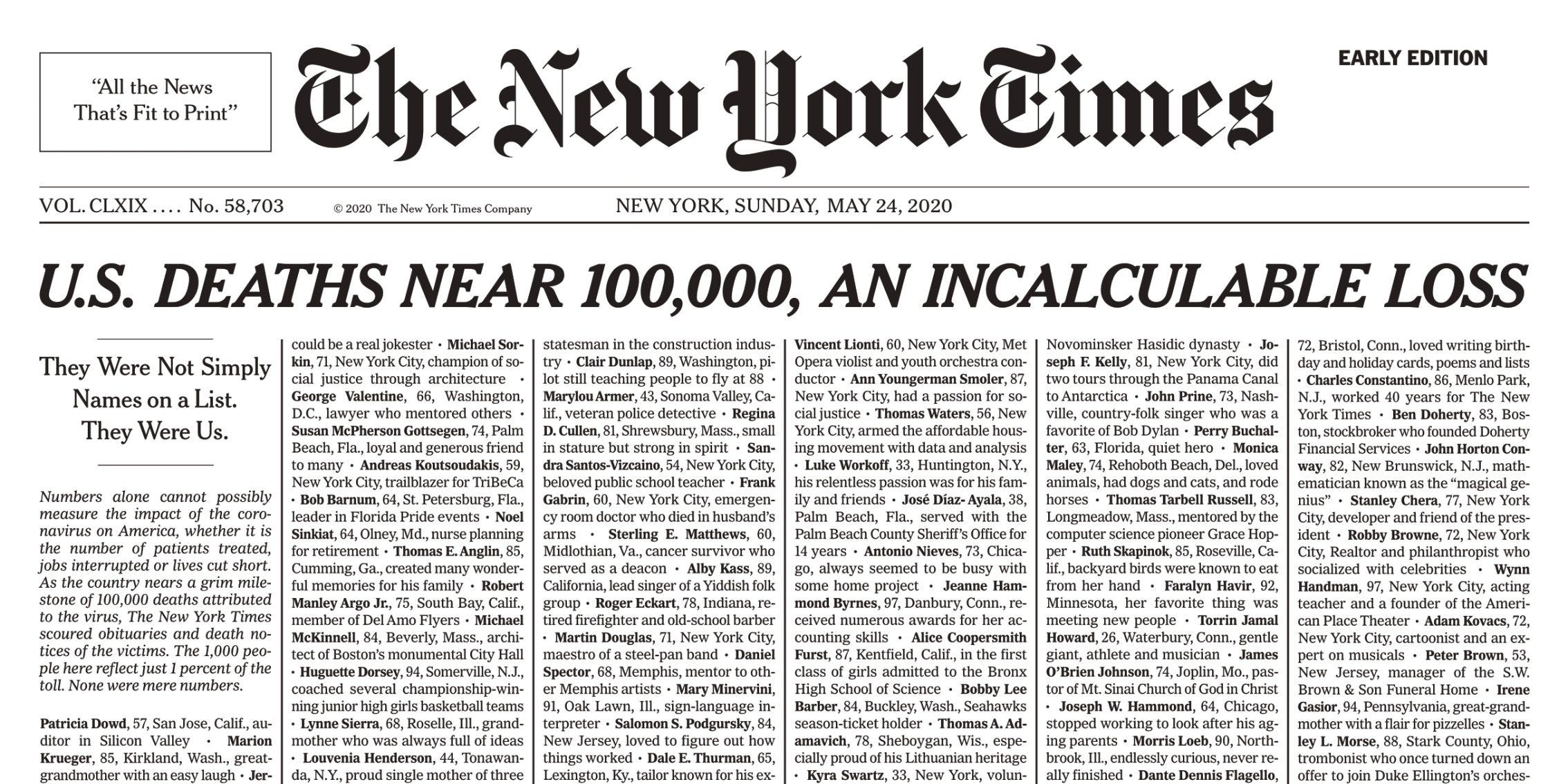 To mark the somber milestone of 100,000 coronavirus deaths in the United States, The New York Times prepared a devastating front page for Sunday’s print edition, listing the names of 1,000 people who have died of COVID-19.

Roughly five months after the first US coronavirus case was reported, the US was set to hit the grim death toll of 100,000 in a matter of days. The Times’ front page represented just 1% of those deaths.

Each of the names on the front page was accompanied with a miniature obituary, noting each person’s name age, city and state, and brief facts about their lives.

For 85-year-old June Beverly Hill of Sacramento, The Times noted that “no one made creamed potatoes or fried sweet corn the way she did.”

Orlando Moncada, a Bronxville man who died at 56, “left Peru and grabbed hold of the American dream.” A 25-year-old Michigan man, Bassey Offiong, “saw friends at their worst but brought out their best.”

“They were not simply names on a list. They were us,” a subheadline on the front-page read.

But at least one of the names appeared to be listed on the front page incorrectly. Jordan Driver Haynes, 27, whose name was listed sixth from the top, was described on the front page as a “generous young man with a delightful grin.” Haynes’ death has been ruled a homicide, not a COVID-19 death.

CNN reported that The Times will be running a correction and will remove Haynes’ name in later editions.

“They were not simply names on a list. They were us,” a subheadline on the front-page read.

The newspaper – a team of editors and three graduate student journalists – compiled the details from online obituaries and death notices that included COVID-19 as the cause of death, according to The Times.

Simone Landon, an assistant editor on the graphics desk, told the newspaper it was important to reckon with the 100,000-person figure.

She said she and her colleagues found that “both among ourselves and perhaps in the general reading public, there’s a little bit of a fatigue with the data,” and sought to create a front page that would visualise the extent of the loss.

The chief creative officer of The Times, Tom Bodkin, noted that Sunday’s newspaper is “certainly a first in modern times” to run a front page with no images or graphics.

Editor’s note: This story has been updated to reflect that one of the names listed on The Times’ front page was a homicide death, not a COVID-19 death.