US coronavirus models increase anticipated death toll to 74,000, the second increase in a week as states begin to lift stay-at-home orders 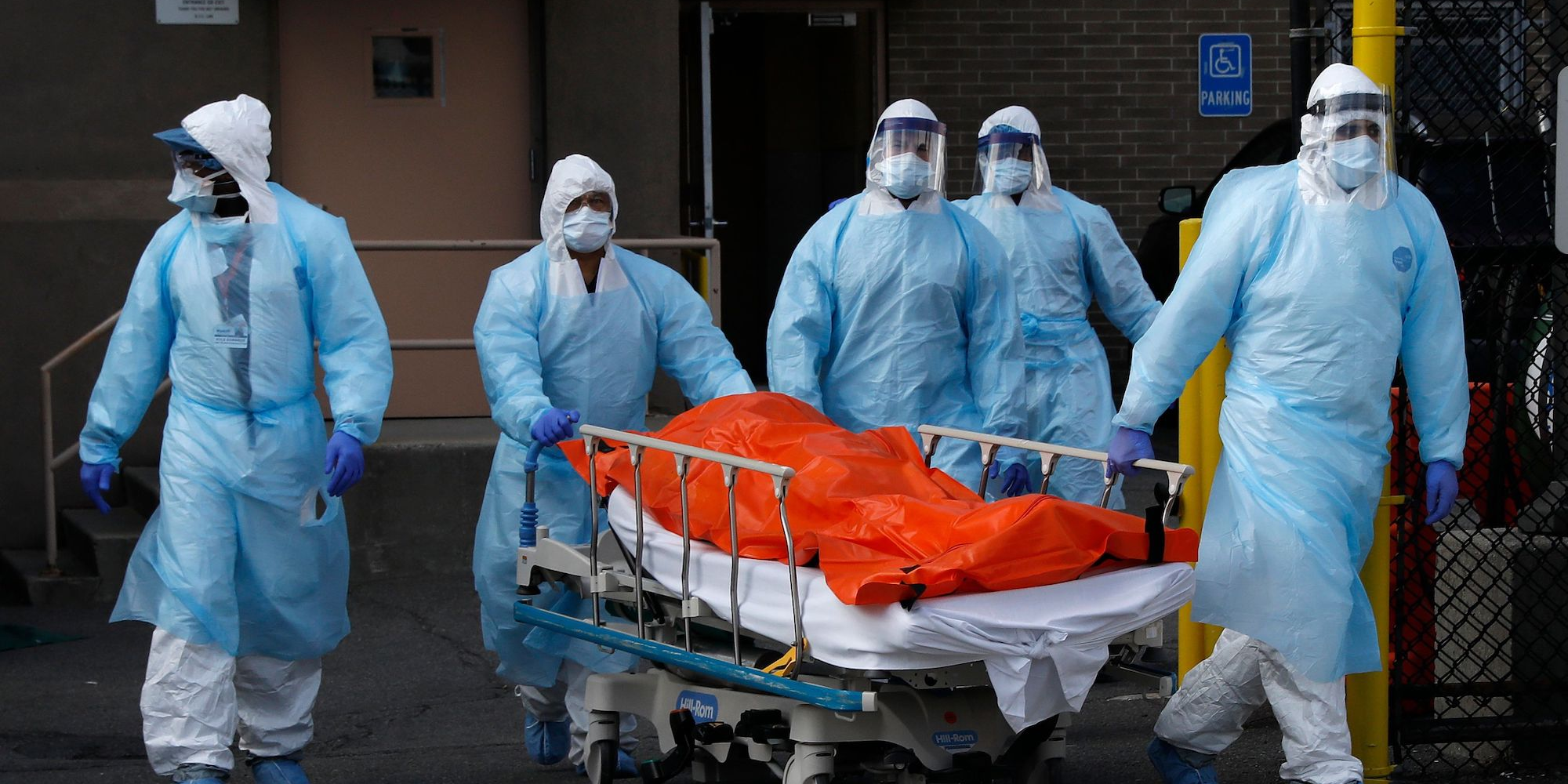 REUTERS/Brendan McdermidHealthcare workers wheel the body of deceased person from the Wyckoff Heights Medical Centre during the outbreak of the coronavirus disease (COVID-19) in the Brooklyn borough of New York City, New York, U.S., April 2, 2020.

The main model used to estimate the impact of the coronavirus outbreak in the United States revised its death toll this week to 74,073 by August 4 – an increase from an April 21 projection of 65,976 deaths by August.

According to CNN, the model is based on data that is constantly being fed and will change to reflect the data it’s seeing. The model also assumes “current social distancing assumed until infections minimized and containment implemented.”

“So the model is always forecasting based on the assumption that the states are all going to line up behind a broad, aggressive social distancing policy. However, we certainly account for the fact that some states have implemented that much earlier than others,” Gregory Roth, one of the senior faculty at the University of Washington’s Institute for Health Metrics and Evaluation told CNN.

The model from the University of Washington’s Institute for Health Metrics and Evaluation, which is used by the White House predicted over 90,000 deaths by August last week. On April 7, that number dropped to 82,000 before it decreased by around 20,000 a few days later. On April 9, the model estimated it’s the lowest death toll of 60,415 before increasing again.

That reduction seemed to suggest that social distancing measures were working. However, some states including Georgia have begun efforts to reopen their economies and lift their lockdowns.Georgia is expected to begin relaxing stay-at-home orders on Friday.

However, The Washington Posts’ Phillip Bump writes that when the death rate was reduced, it wasn’t a reason to assume that social distancing measures were an overreaction or are unnecessary moving forward. He was responding to arguments made by Fox News’ Brian Kilmeade – that the social distancing measures are unnecessary based on the new predictions.

“You have to wonder, as much as social distancing ‘s working, I wonder if the economists are going to get in that room and say, we have to stand up this economy in some way before we are not going to be able to stand when this is all said and done,” Kilmeade said in an episode of “Fox & Friends,” according to The Post.

Additionally, Anthony Fauci warned that if social distancing worked, people might begin to think it wasn’t necessary, according to CBS.

“I want people to assume that I’m over- or that we are overreacting because if it looks like you’re overreacting, you’re probably doing the right thing,” he told CBS.

Roth told CNN that the predictions have quickly evolved based on newly available data on the death count from Johns Hopkins University.

“This has been a very rapidly evolving pandemic and as data sources change, we want to include them in our forecasts as quickly as possible,” he told CNN.

Additionally, Roth said the models are available on data as it’s available and for places that haven’t seen the peak of their outbreaks, the prediction numbers could be “less certain.”

Roth expressed concern early in April that the death toll could go up beyond the current estimate if social distancing is lifted. He said the measures have been working, and if rolled back to soon, there could be an increase of cases and deaths.

“So we haven’t seen a relaxing of social distancing in any parts of the United States yet. In the future, if social distancing was relaxed, we would be concerned that there would be a rise again in the number of cases,” he told CNN in early April. “In fact, one of the most important features of social distancing is that we maintain it long enough to avoid recurrent spikes in the disease. We know that even when cases and deaths are declining in some locations, there is still circulating virus.”

Other experts and studies have also suggested that lifting a lockdown too soon especially without a vaccine could lead to a second wave of infections, Business Insider previously reported.