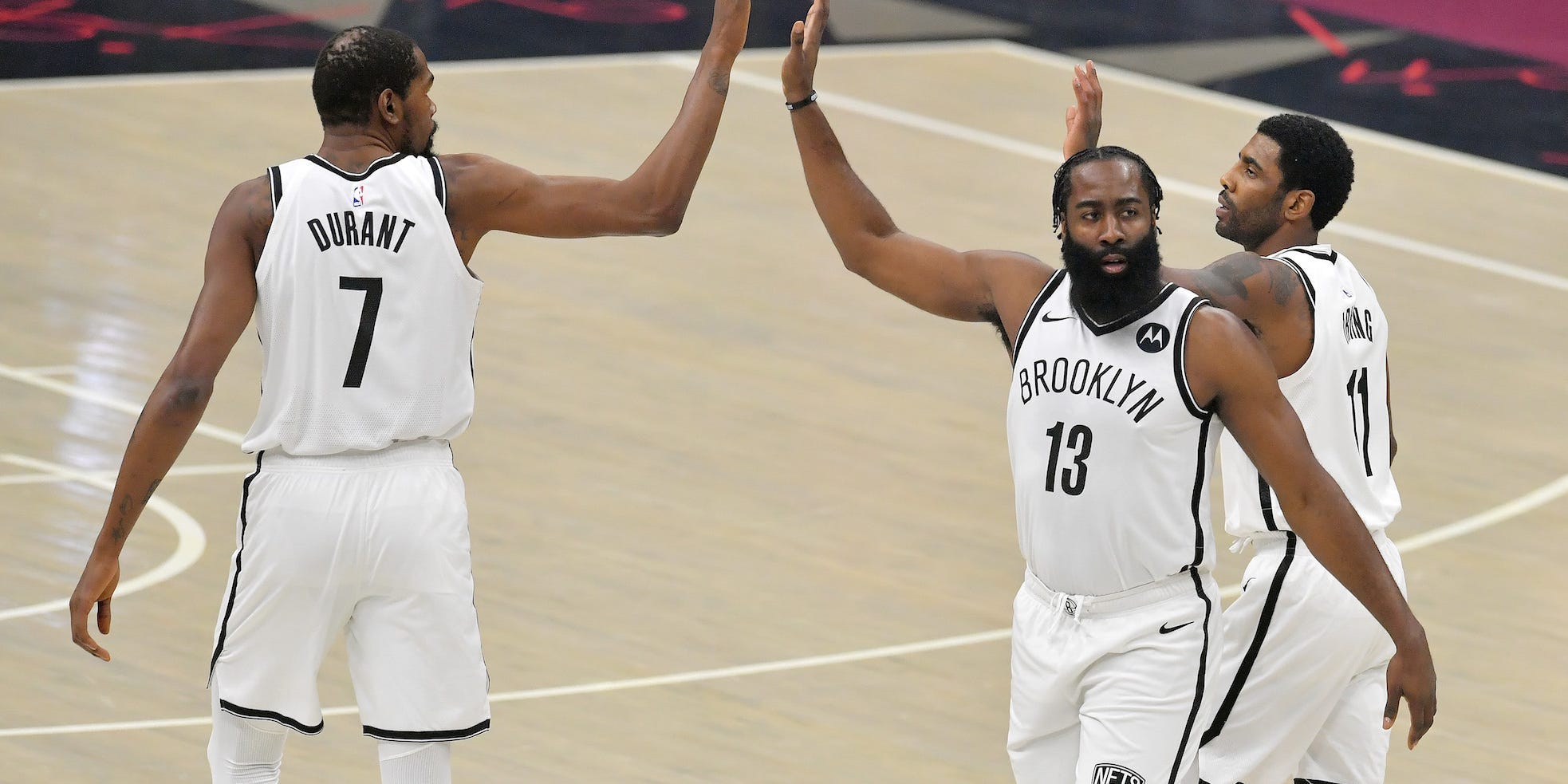 The Brooklyn Nets’ first game with their new Big Three did not result in a win, but it was encouraging, nonetheless.

With Kevin Durant, James Harden, and Kyrie Irving suiting up together for the first time, the Nets lost to the Cleveland Cavaliers in double-overtime, 147-135.

The Nets have a long way to go, and new groups of players will often go out of their way todefer=”defer”to one another and try to make things work.

But a common refrain in the NBA world when the Nets traded for Harden last week was, “There’s only one ball.”

Indeed, Harden has been the most ball-dominant player in the NBA over the last four years, forming an offence unto himself with the Houston Rockets. Durant is one of the best scorers of all-time and needs his touches. Irving is an All-Star point guard and a wizard with the ball in his hands. How would the Nets blend all of these talents to make it work?

In their first game together, it didn’t appear to be much of an issue. Good luck to NBA defences trying to defend this:

To recap: Joe Harris, a career 43.1% three-point shooter, got a wide-open three because the Cavs first stopped Irving at the rim, Durant in the corner, then Harden on the wing. Harris shot 2-of-7 from deep on Wednesday; that won’t happen often.

The Nets, at times, won’t even need complex offensive actions to generate good shots. The skills and gravity of their star players will bend defences, opening up opportunities all over the court.

The above play could have gone in a lot of different directions. Harden likely turned down an open layup, though his footing was a bit awkward. 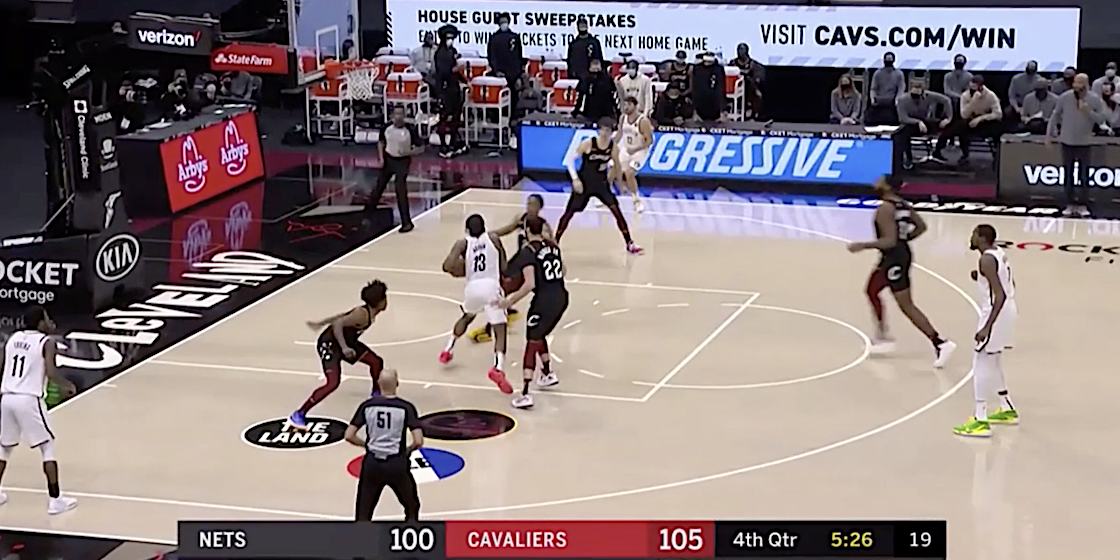 Harden kicked it back out to Durant, who probably could have attempted a catch-and-shoot three, though Larry Nance Jr. closed out well on it. 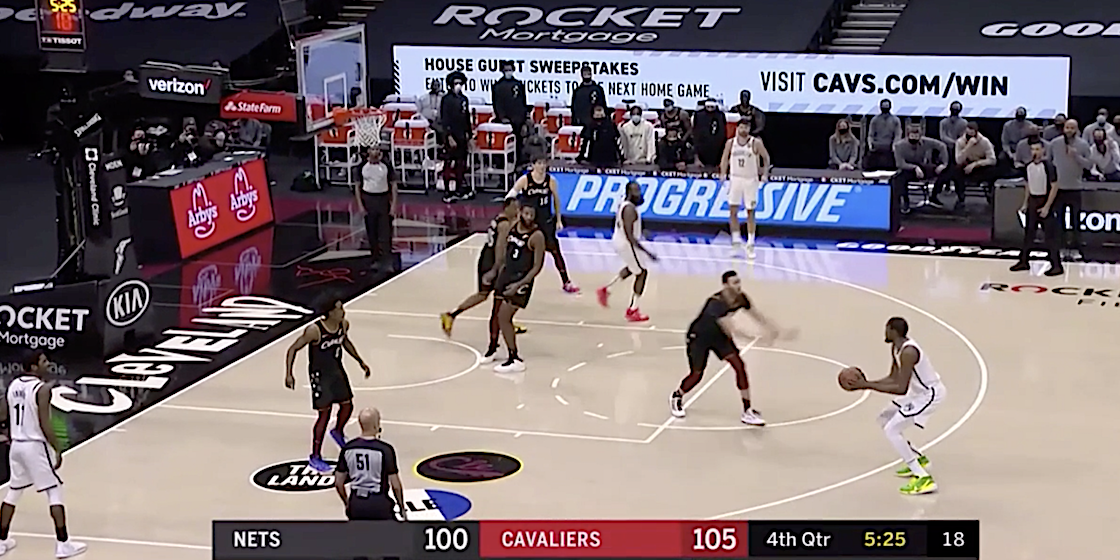 When Durant drove into the paint, it’s easy to see how the play could have gone in several directions. Durant could have kicked it back out to an open Jeff Green. He could have passed it back to Harden.

Durant surveyed to see if the Cavs helped off Irving in the corner. When they didn’t (at least not far enough), he settled for the 17-foot pull-up jumper, where he is shooting 50% for the season. 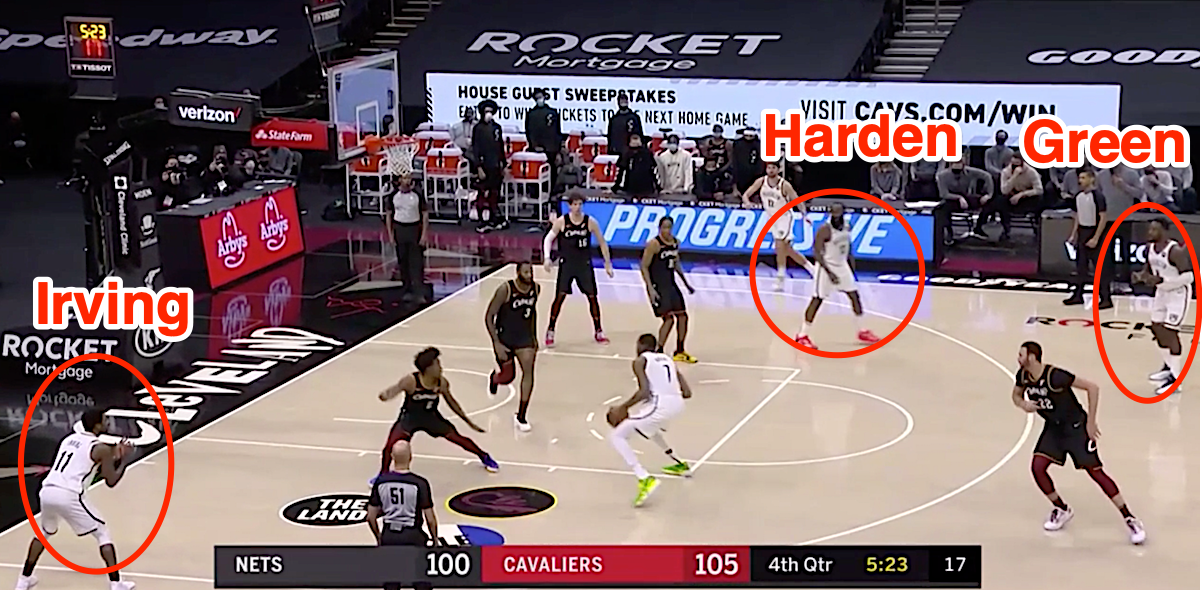 The Nets assisted on 30 of their 48 made baskets on Wednesday. In three games with Harden (two of which came without Irving), the Nets have scored 122, 125, and 135 points. So far, the offence is not a problem.

The Nets still have work to do

Of course, despite the offensive success of Wednesday, the Nets still lost to the Cavs.

The Nets did not improve in these two areas of the game by trading Jarrett Allen, Caris LeVert, and Taurean Prince for Harden.

In three games since acquiring Harden, the Nets have scored more points than anyone else in the NBA, but they also have given up more points than any other team. On Wednesday, the Cavs shot 50% from three, upstaging the Nets’ big 3. The Nets will have to lean on their offence to out-score opponents unless they revamp their defence.

Additionally, on Wednesday, Durant and Harden played over 50 minutes while Irving played 48 in his first game in three weeks. They appeared to run out of gas by the second overtime.

While the top of the Nets rotation is elite, this roster is still incomplete. The Nets will likely have to acquire a backup centre during the season, and they may also seek out another wing to fill out their rotation. The Nets on Wednesday needed the offensive fire-power of their Big Three because Harris, Timothe Luwawu-Cabarrot, and Bruce Brown combined to score 6 points on 2-of-16 shooting, while Landry Shamet was a Did Not Play – Coach’s Decision.

The Nets are an imperfect squad, as most super-teams are â€” they sacrificed depth for elite talent. Whether the offence can function at this level one or two months from now, when the stars may not be trying as hard to make each other happy, will be worth monitoring. But if the first game was any indication, it appears their sheer skill and fire-power will make them difficult to beat on most nights.