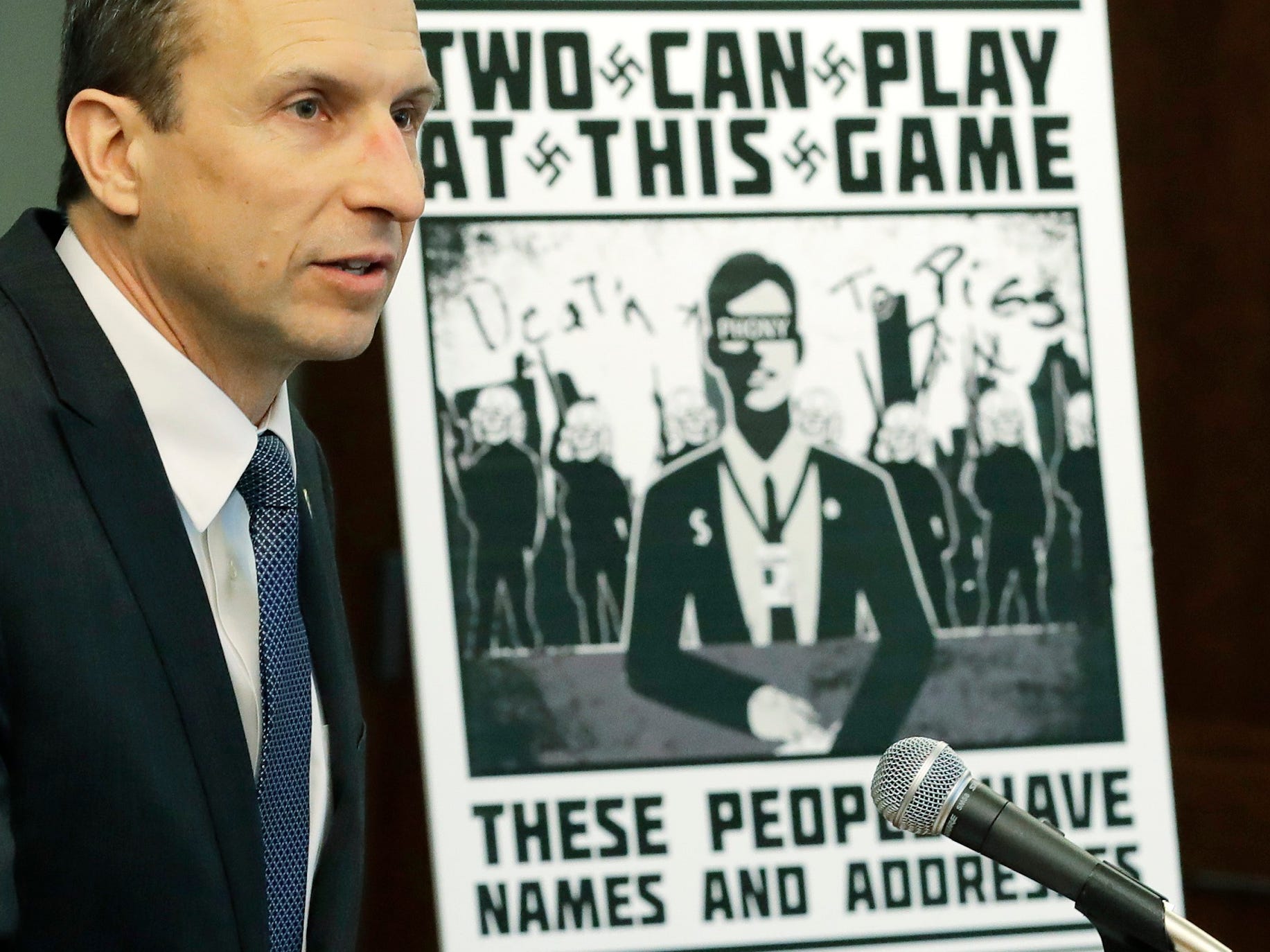 AP Photo/Ted S. WarrenRaymond Duda, FBI Special Agent in Charge in Seattle, speaks as he stands next to a poster that was mailed earlier in the year to the home of Chris Ingalls, an investigative reporter with KING-TV.

A 25-year-old leader of a neo-Nazi organization linked to murders across the United States has pleaded guilty to federal hate crime and conspiracy charges after threatening journalists and others who worked to expose anti-Semitism.

Cameron Shea was arrested in March 2020 and charged with conspiring to intimidate members of the press and the Anti-Defamation League in Washington state, as The Guardian’s Jason Wilson reported. In charging documents, the Department of Justice described him as a “high-level member and primary recruiter” for the Atomwaffen Division.

The Southern Poverty Law Center describes the group, founded in 2015, as “a terrorist neo-Nazi organization” whose members believe in using violence to accelerate the collapse of society.

Members of the group have been linked to a string of violent hate crimes. After one member was charged in 2018 with killing Blaze Bernstein, a gay, Jewish college student in California, Google, Discord, and other technology companies moved to bar the organization from using their platforms, which had been used to spread propaganda and organize illicit activities.

The US Department of Justice, in a statement on Wednesday, said Shea and three co-defendants conspired online to “identify journalists and advocates they wanted to threaten in retaliation for the victims’ work exposing anti-Semitism,” focusing primarily on Jews and reporters of color. Targets in Tampa, Seattle, and Phoenix were then mailed posters featuring Nazi symbols and threats of pending violence.

“We will be postering journalists houses and media buildings to send a clear message that we too have leverage over them,” Shea said in a November 2019 group chat, the Associated Press reported. The targets were chosen for their critical work on far-right extremists.

A poster sent to an employee of the Anti-Defamation League featured a “Grim Reaper-like figure wearing a skeleton mask holding a Molotov cocktail,” according to the Justice Department, with text reading: “Our Patience Has Its Limits . . . You have been visited by your local Nazis.”

Last fall, two other members of the group pleded guilty to involvement in the conspiracy. And in July 2020, another admitted to making false claims to police that led to SWAT teams arriving at the homes of reporters, Seattle-area NBC affiliate KING 5 reported.

In March, a 20-year-old Atomwaffen member, John William Kirby Kelley, was handed a 33-month prison sentence for hosting the chat room where such activities were planned, according to The Washington Post. Other targets included Black churches and a former Trump Homeland Security chief, Kristjen Nielsen.

Another member of the conspiracy, Taylor Parker-Dipeppe, pleaded guilty to distributing a poster in Florida – at the wrong address – and last month received a sentence of time served. According to their attorney, Parker-Dipeppe was kicked out of the neo-Nazi group after coming out as transgender.

Emily Langlie, a spokesperson for the Justice Department, declined to state whether Shea is cooperating with authorities, citing department policy.

An alleged co-conspirator, Kaleb Cole, has pleaded not guilty and is due to face trial in September, she said.