'The Bachelor' filmed this season at a lavish resort in Pennsylvania — take a look inside the 2,200-acre property 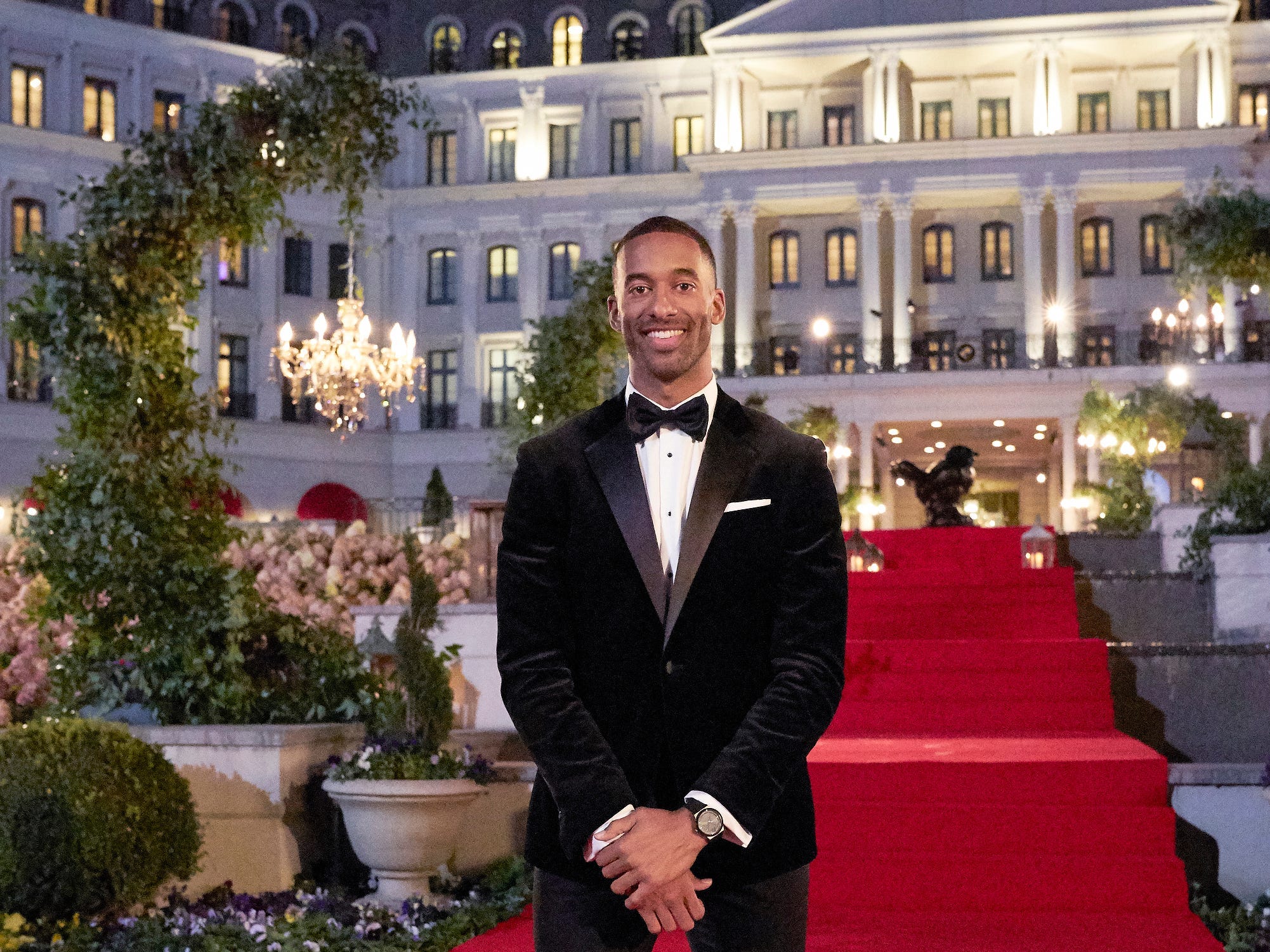 Craig Sjodin via Getty ImagesInsider is taking you inside Nemacolin resort, where Matt James’ season of ‘The Bachelor’ was filmed.

The ongoing pandemic forced “The Bachelor” to do away with their usual extravagant dates that took contestants all around the world, from the turquoise seas of Greece to the Australian outback. Instead, as with the most recent season of “The Bachelorette,” filming had to be confined to just one location.

But ABC managed to find a glamorous alternative by filming Matt James’ season at the Nemacolin resort in Farmington, Pennsylvania.

The resort â€” which is currently open for reservations â€” has already made headlines this week after Nemacolin CEO Maggie Hardy told Page Six’s Tashara Jones that a used condom was found in a tree while “The Bachelor” was filming.

Insider spoke to Nemacolin’s property team to give you an inside look at the majestic estate, which spans over 2,000 acres and offers everything from Jeep off-roading and cross-country skiing to a holistic healing centre and tours by its own dog-sled team. 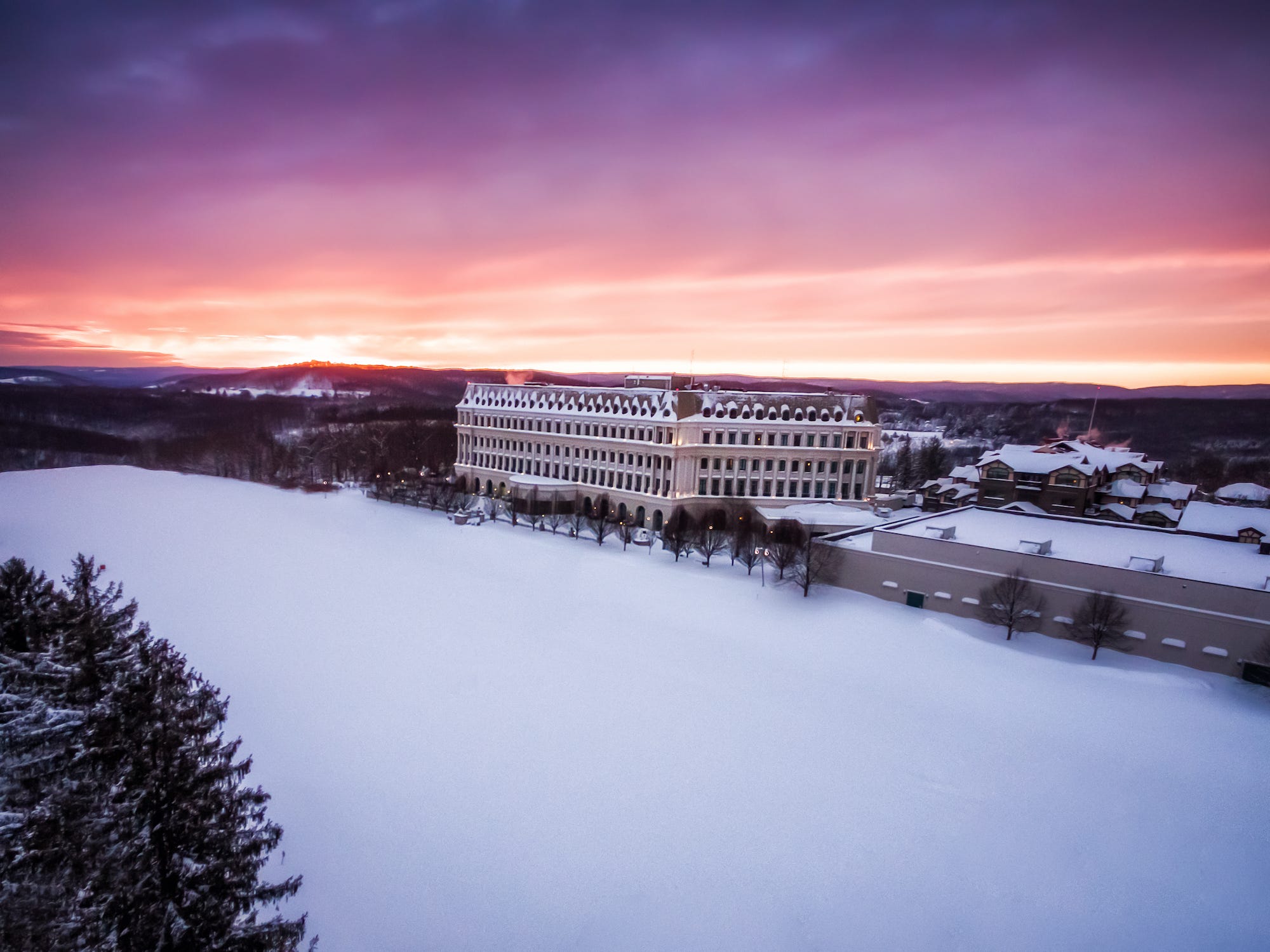 The resort – located about 70 miles away from Pittsburgh – features plenty of space to film a television show and has a variety of accommodation options to choose from.

Nemacolin was originally a hunting lodge in the 1970s before it was purchased at an auction in 1987. 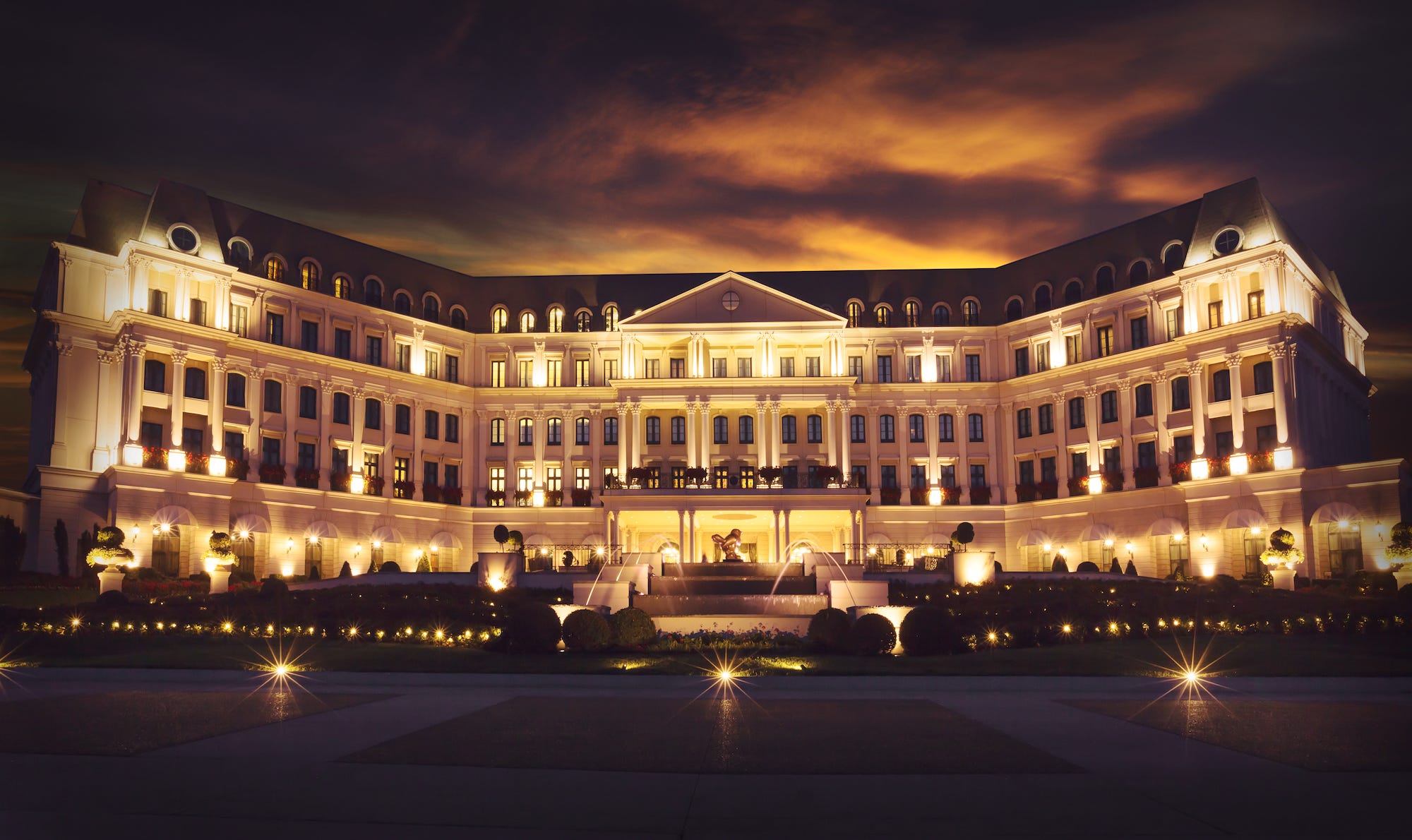 Courtesy of NemacolinThe Chateau at Nemacolin.

The Chateau – where James first met his contestants during the limo entrances in “The Bachelor” premiere – opened to guests in 1997.

“Mr. Hardy was inspired by The Ritz in Paris, and he wanted to bring the architecture and grandeur of this iconic hotel to Nemacolin,” the property team told Insider.

The hotel has since expanded to include Falling Rock – where the women stayed during filming – as well as The Lodge (described as “a quintessential woodsy escape” on Nemacolin’s website), and additional private homes and estates that can be reserved by guests.

Matt James stayed at Mystic Falls, one of Nemacolin’s private estates, during filming. Courtesy of NemacolinMystic Falls, the estate where Matt James stayed during the filming of ‘The Bachelor.’

The “Bachelor” and “Bachelorette” leads always have their own private accommodation, and this season was no different. 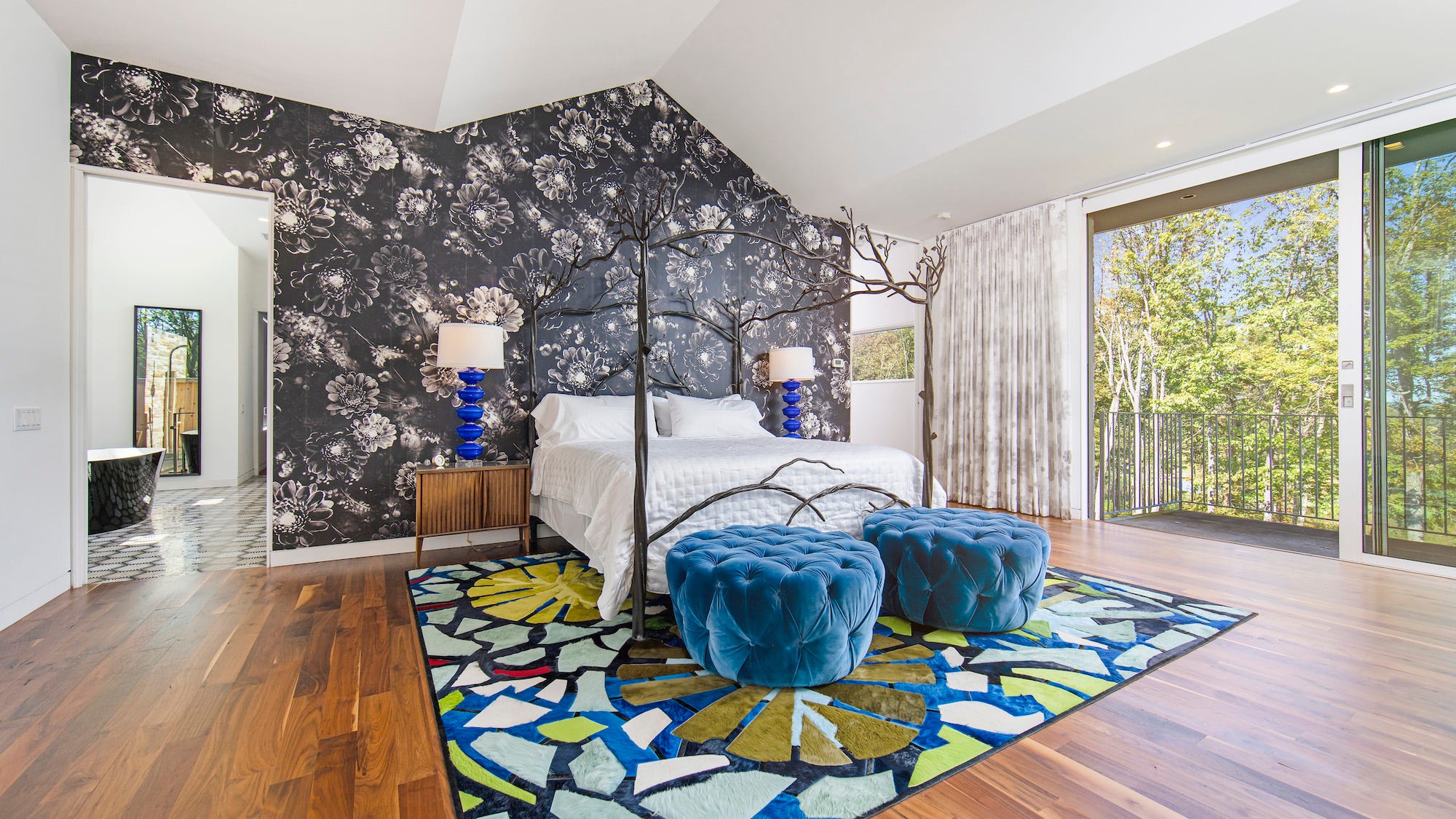 In addition to the master king suite, there are three guest bedrooms – all of which have a queen bed and a private bathroom.

The estate, which was “designed around the rising and setting of the sun,” is decorated with bright pops of colour. 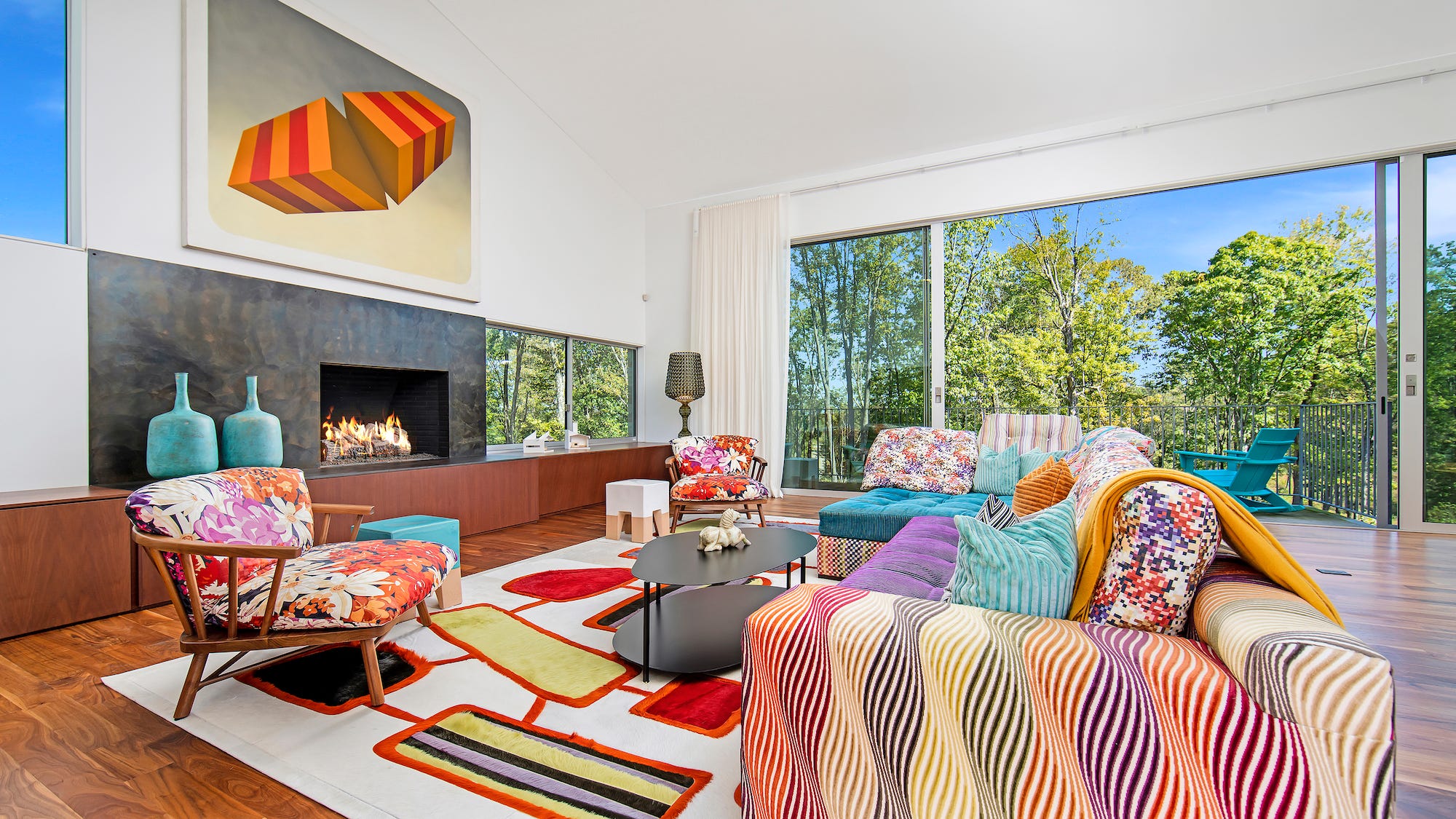 Mystic Falls also has a gourmet kitchen, entertaining decks, and a private yard with an outdoor shower.

Mystic Falls even has its own golf course. 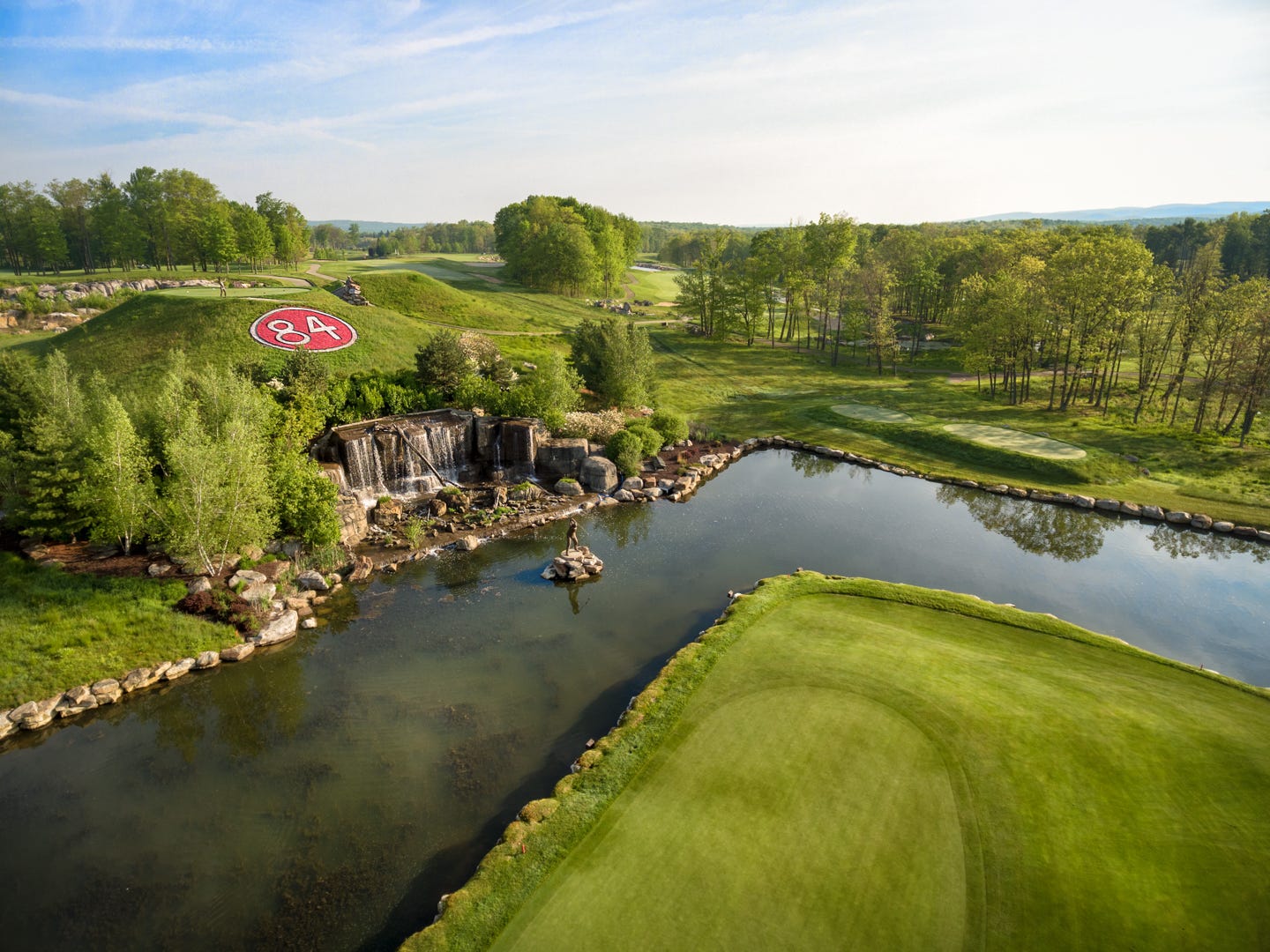 Mystic Falls was designed by the award-winning architect Carlos Jimenez.

James’ contestants stayed at Falling Rock, which Nemacolin initially opened in 2004 for PGA golfers and their guests. 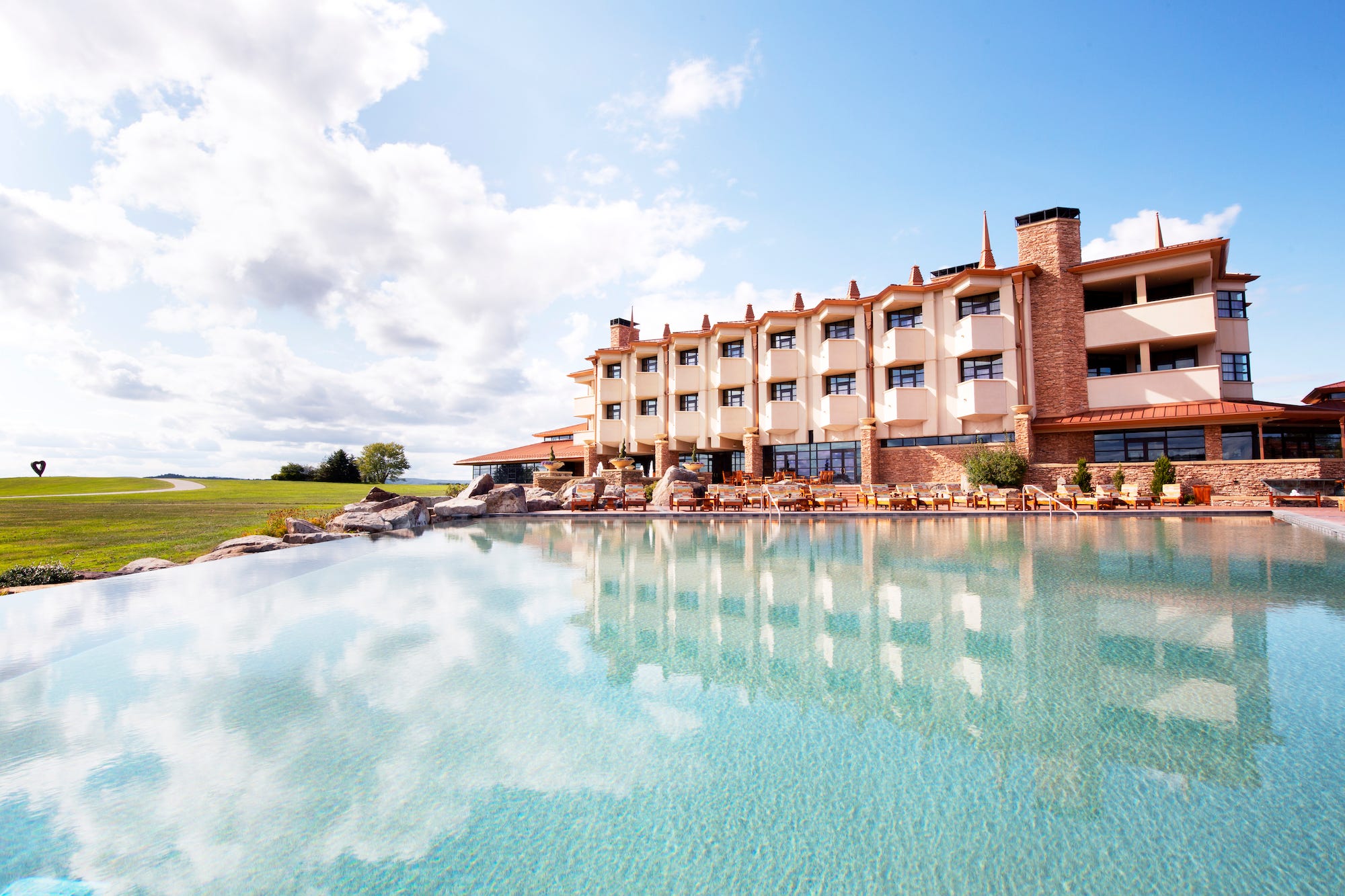 “Mr. Hardy enlisted the talent of architect and Wright-apprentice David Merritt to design an extraordinary boutique hotel and golf clubhouse,” they added.

Falling Rock also features an infinity pool with sweeping views of the property. 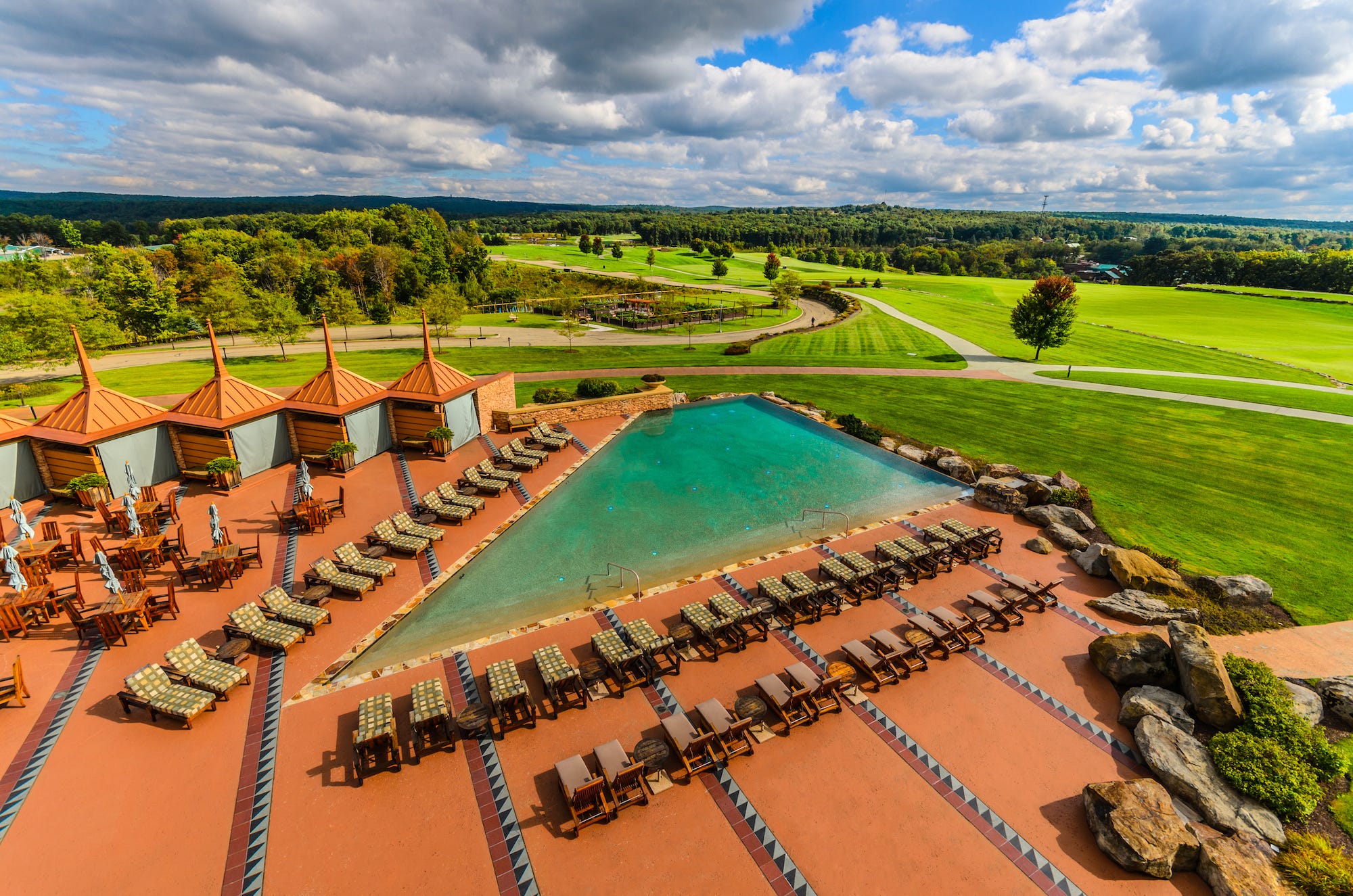 Courtesy of NemacolinFalling Rock has private access to a grand infinity pool at Nemacolin.

The pool has plenty of loungers, as well as private cabanas.

“Bachelor” contestants usually have to room together, so they likely stayed in Falling Rock’s double rooms. 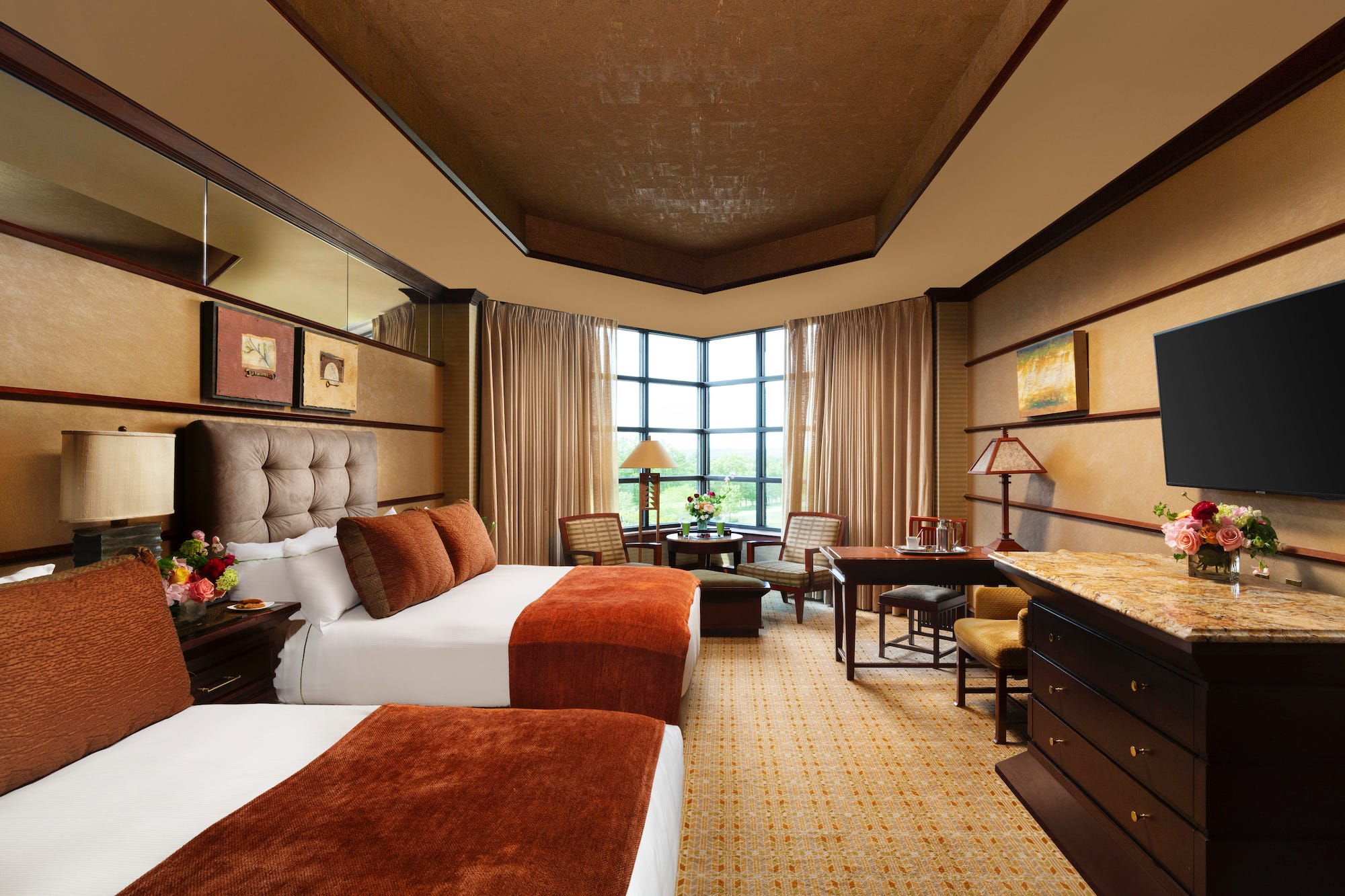 Jordan MillingtonOne of the double rooms on offer at Falling Rock, where James’ contestants stayed.

There’s also a special menu of baths on offer at Falling Rock. 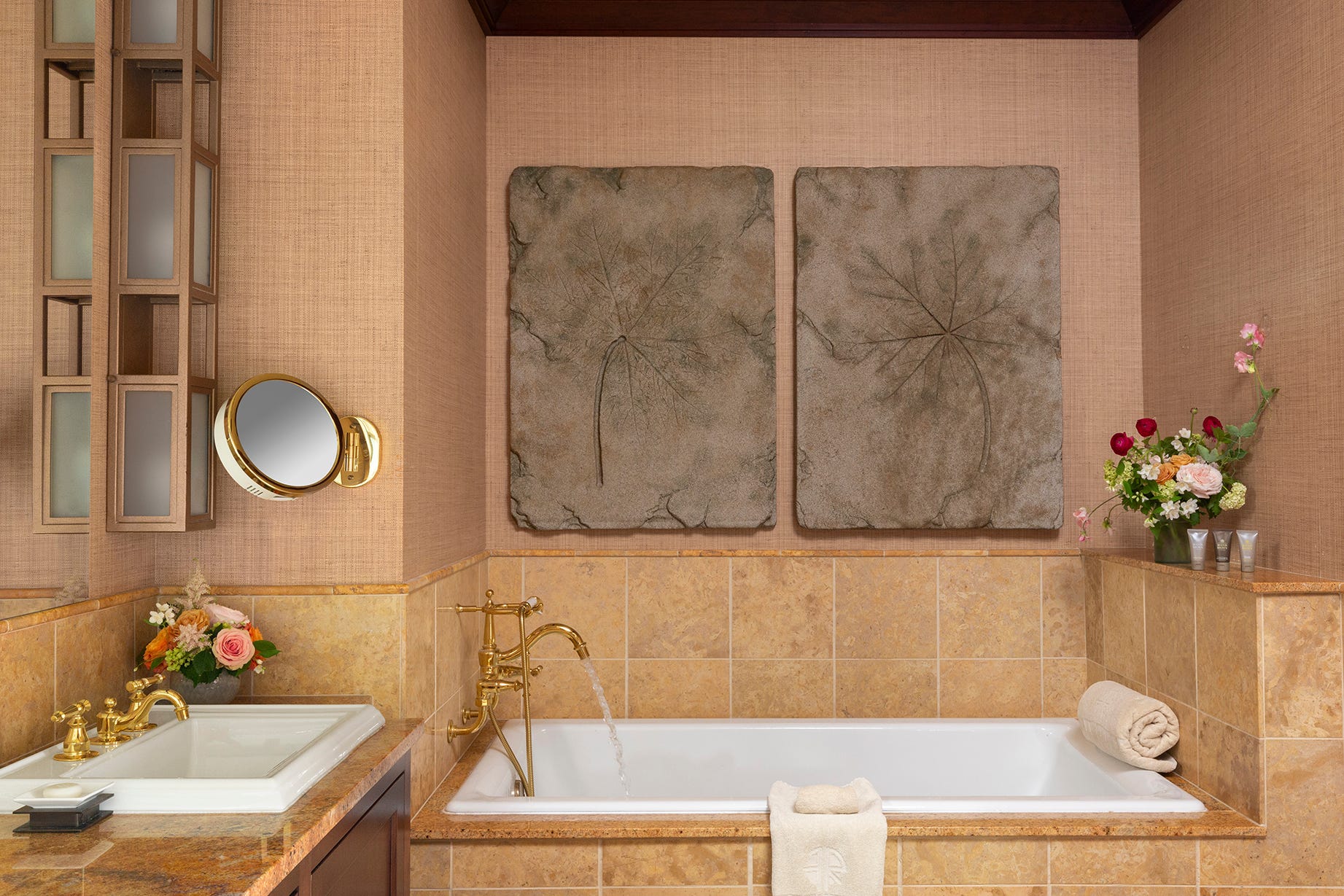 Jordan MillingtonOne of the bathrooms available at Falling Rock.

Guests can order milk baths filled with nectar or coconut cream, salt baths like lavender or rosemary and mint, or the “romance” bath – complete with bubbles, candles, and flower petals.

You’ll also find a holistic healing centre and the Woodlands Spa and Salon at Nemacolin. 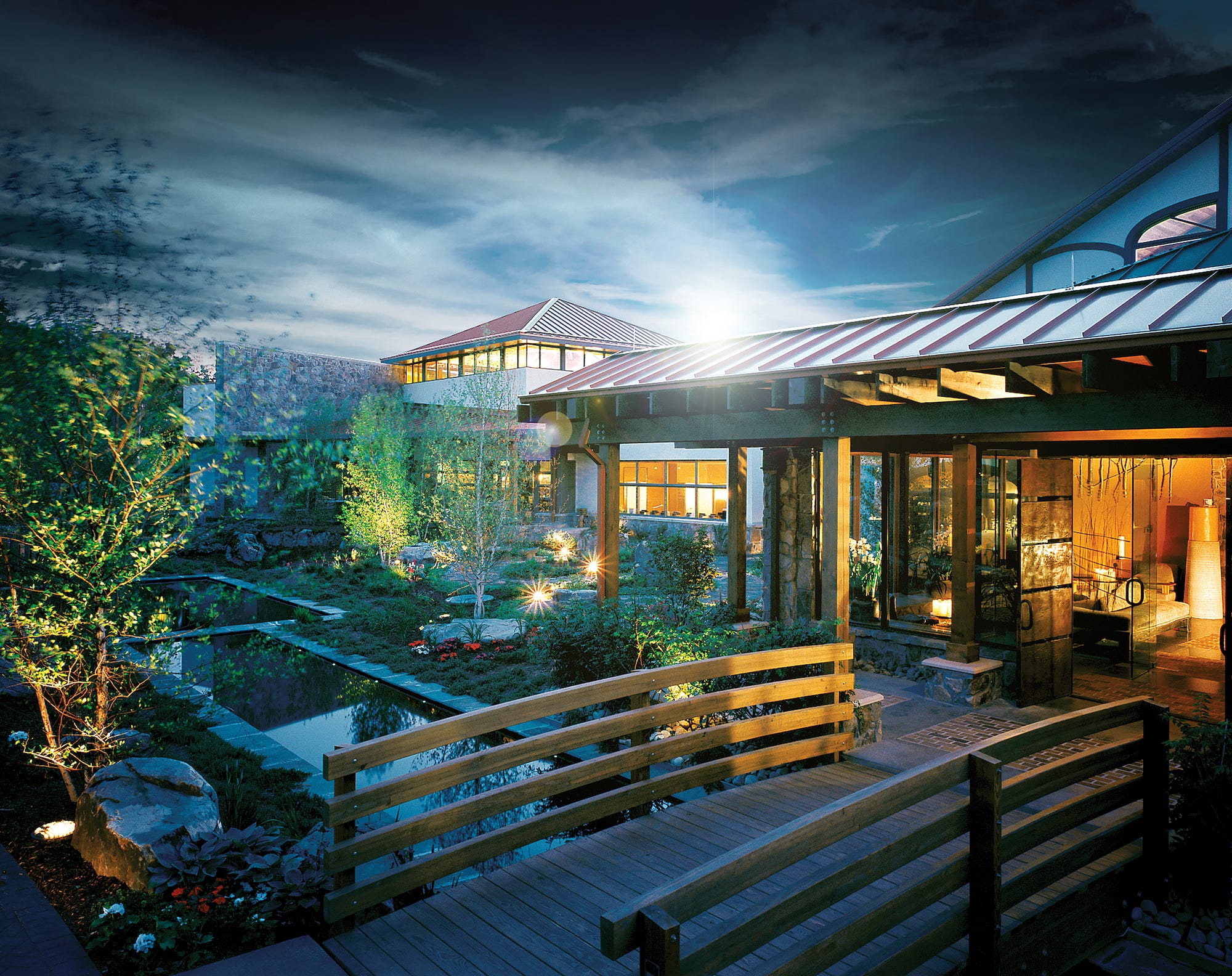 Courtesy of NemacolinThe Woodlands Spa and Salon at Nemacolin.

Whole-body cryotherapy sessions, float-tank therapy, and a zen garden are just a few of the features of the holistic healing centre.

The Woodlands Spa and Salon has a lap pool, whirlpool, steam room, and sauna areas. 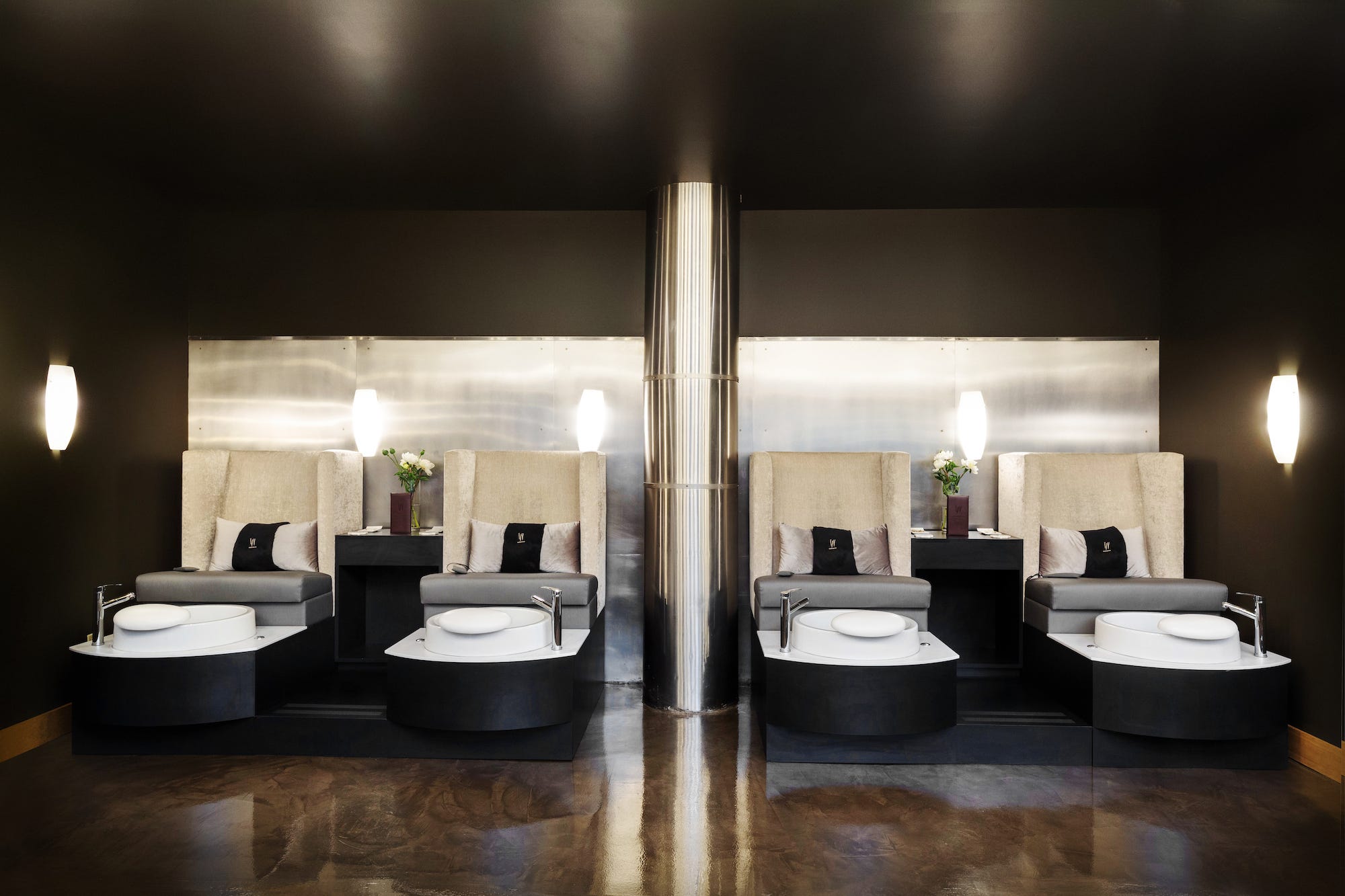 Jordan MillingtonWoodlands has a full-service salon and spa.

There’s also a full-service salon and an extensive menu of spa treatments – including a chocolate massage.

Nemacolin also has four different restaurants on the property. 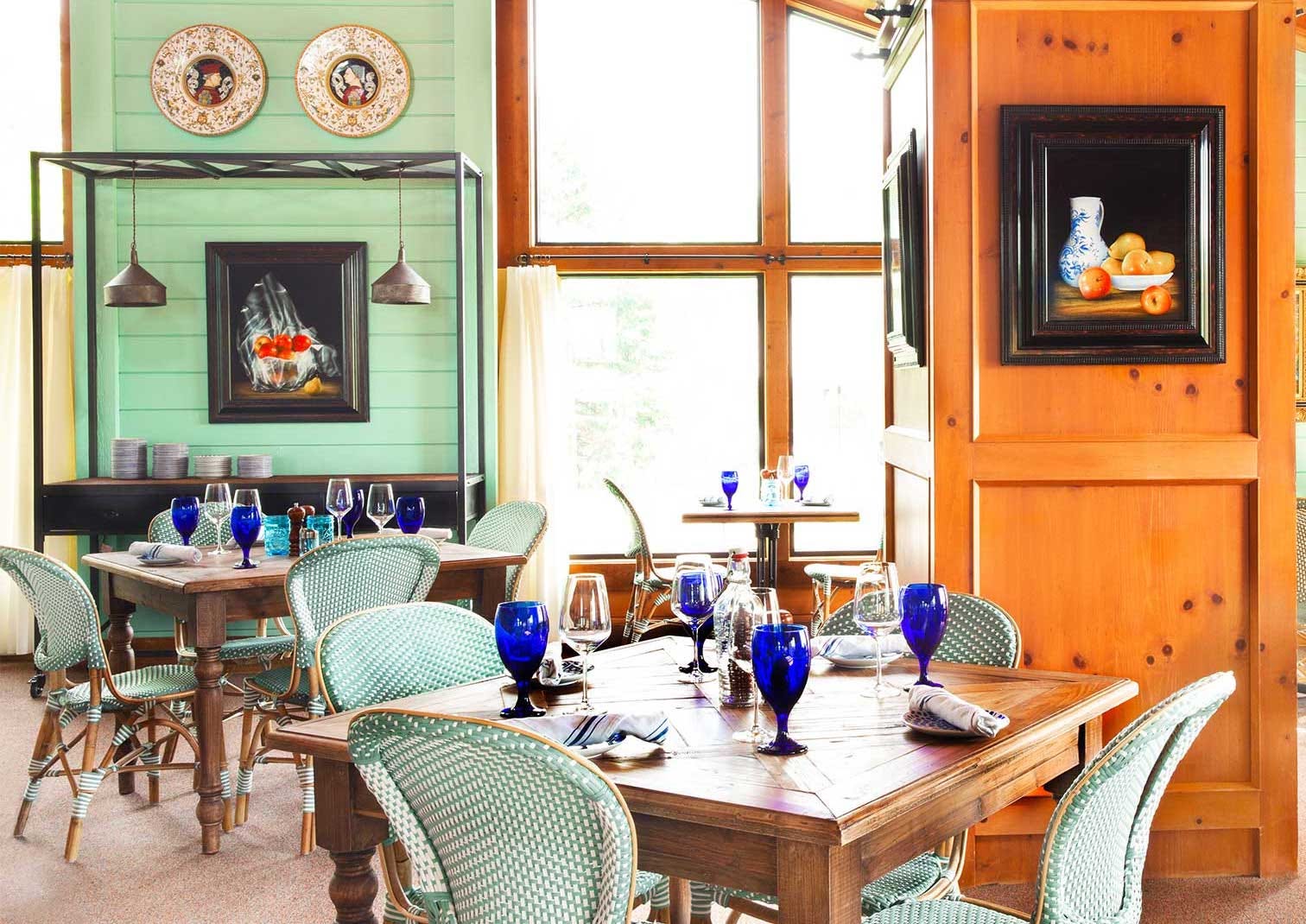 They include an Italian eatery, a steakhouse, and a seafood restaurant. 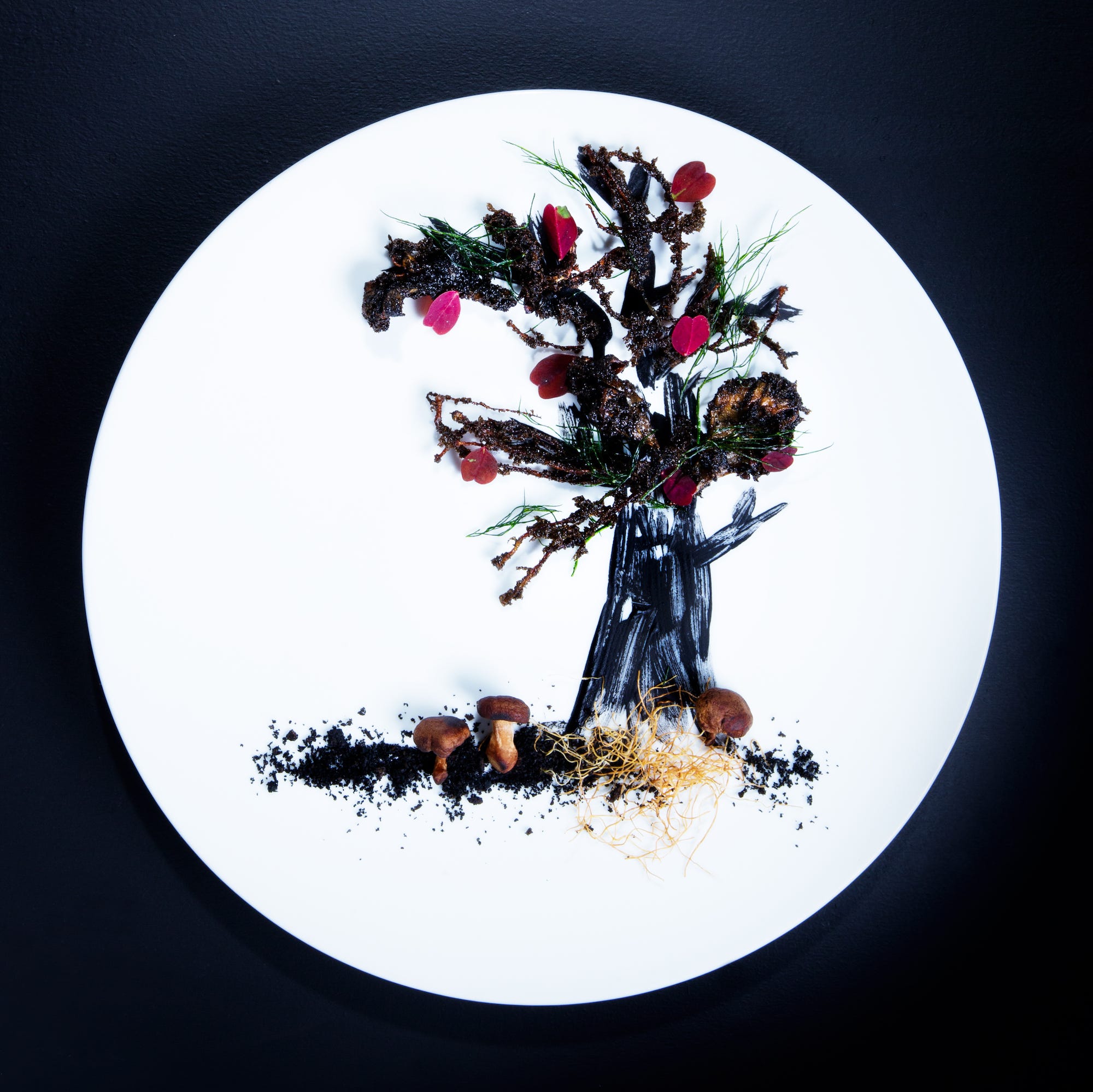 Jordan MillingtonA dish served at Lautrec in the Nemacolin resort.

Executive chef Kristin Butterworth has been a semifinalist for James Beard’s best chefs in America award for two years in a row, according to Nemacolin’s website. 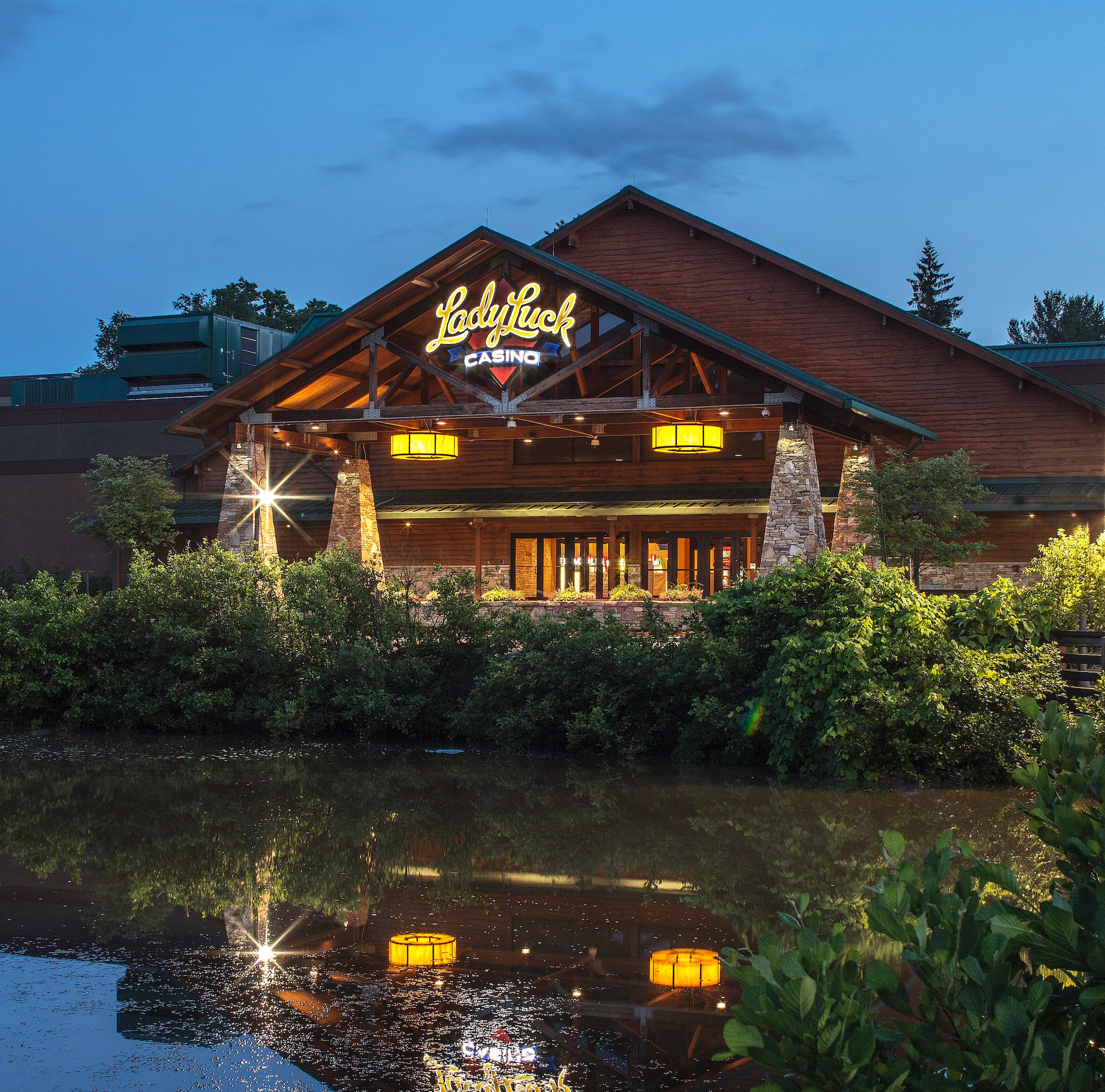 Courtesy of NemacolinNemacolin even has its own casino.

Activities at the resort include art classes, partner yoga, essential-oils workshops, and a tour of the Hardy family’s $US45 million art collection – which includes over 1,000 individual pieces.

Some of Nemacolin’s activities, like Jeep off-roading, have already been featured in James’ season. 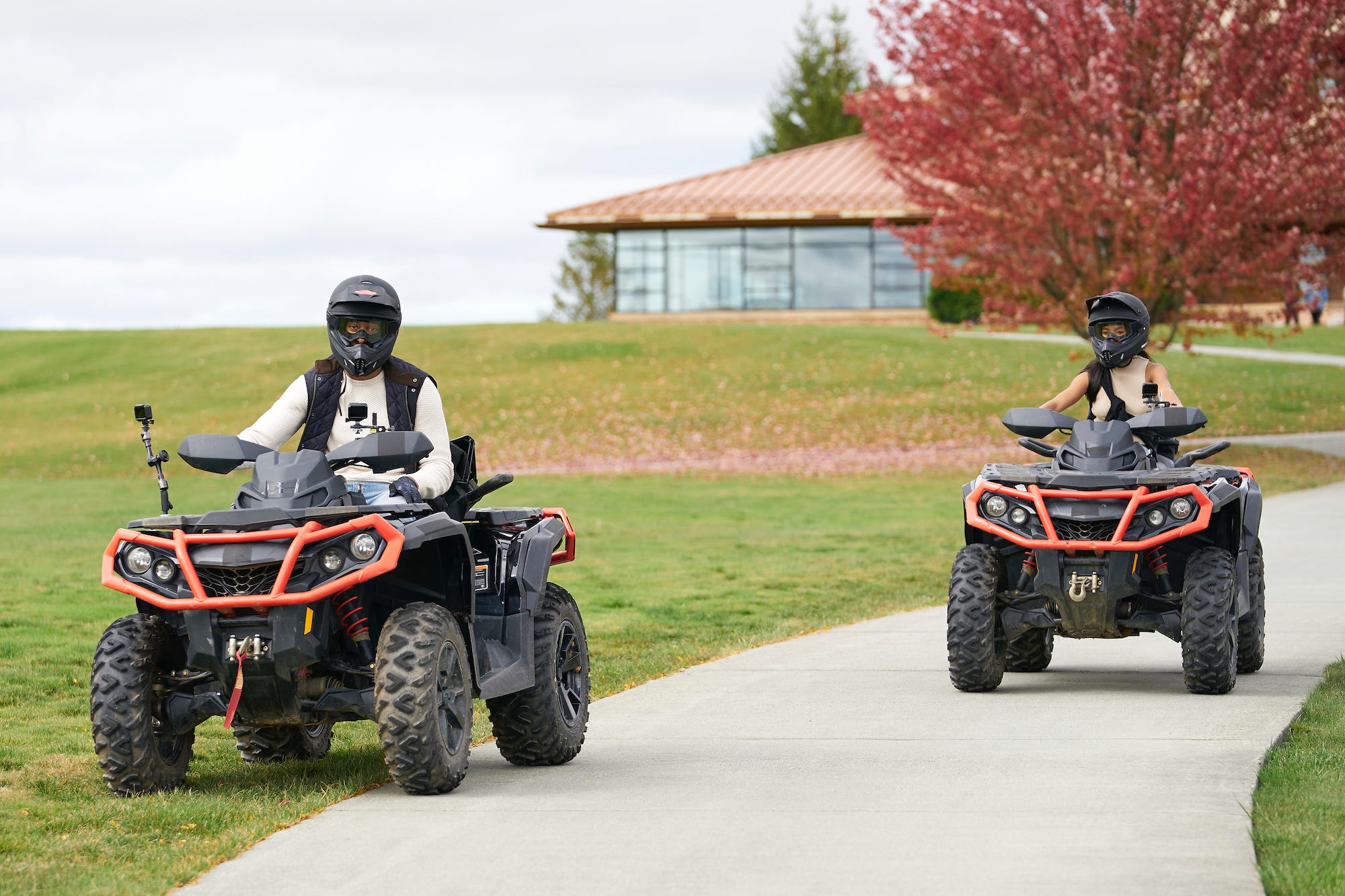 ABC/Craig SjodinMatt James and contestant Bri Springs go off-roading during an episode of ‘The Bachelor.’

Cross-country skiing, snow tubing, fly fishing, horseback riding, and paintball are also on offer. Nemacolin even has its own dog-sled team to give guests a tour of the property.

There’s also a zoo with animals including tigers, lions, goats, wolves, and foxes.

“Audiences can expect to see many of the property’s unique experiences, restaurants, and lodging during Matt’s dates on this season,” Nemacolin’s property team told Insider.

This isn’t the first time Nemacolin has been featured in “The Bachelor” franchise. 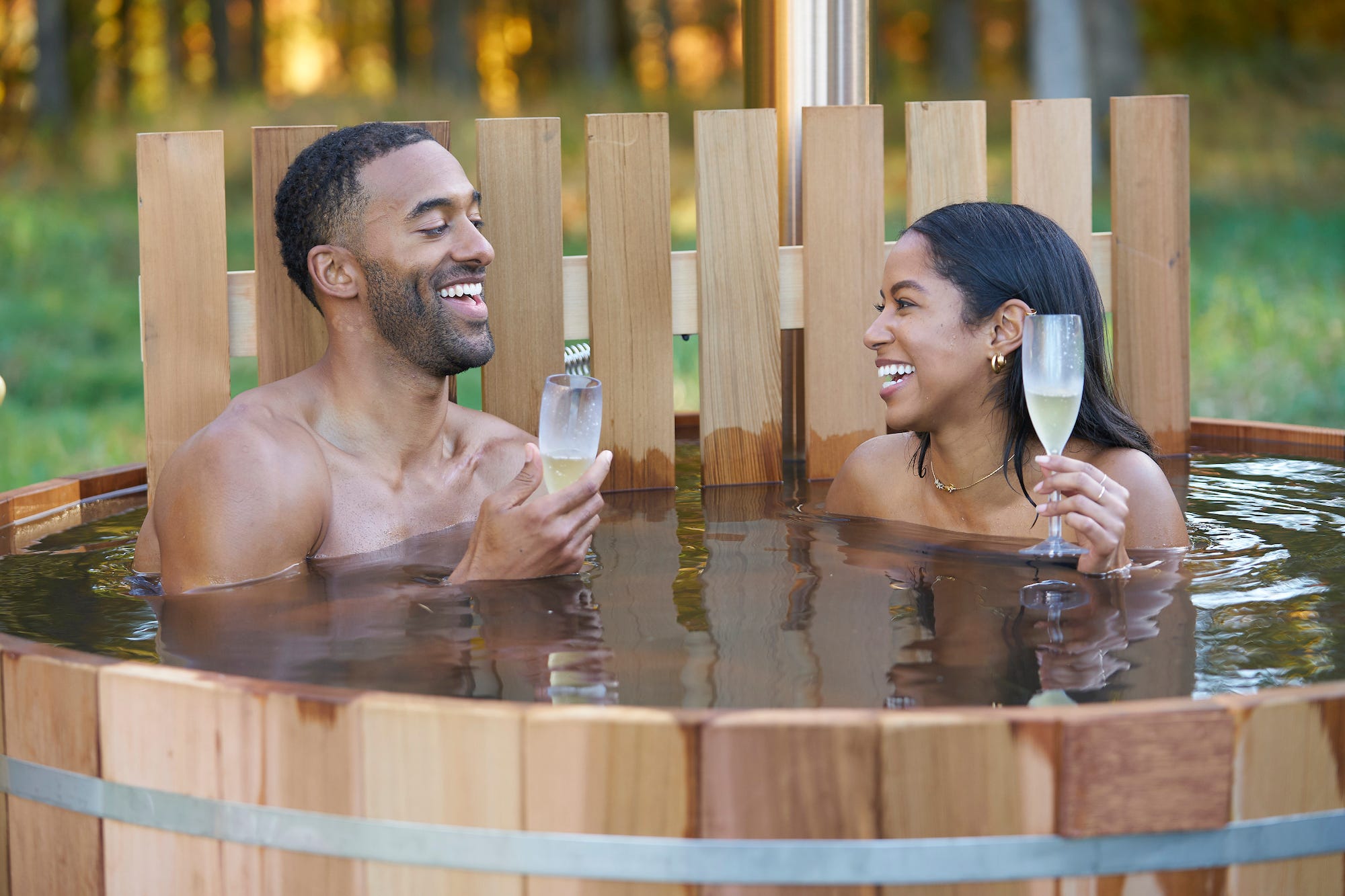 Nemacolin first appeared on JoJo Fletcher’s season of “The Bachelorette” in 2016.

Former “Bachelor” stars Peter Weber and Kelley Flanagan, who recently announced their split, also vacationed at Nemacolin in September and filmed their trip for a YouTube video.

“ABC has always kept in contact with the property and was thrilled to select the resort as the location for Matt James’ season,” the property team said. “With nearly 2,000 acres, Nemacolin was the ideal spot for both cast and crew to feel safe amid the COVID-19 pandemic.”

No significant changes were made to any of the accommodations during filming for James’ season, but precautions were taken due to the ongoing pandemic. 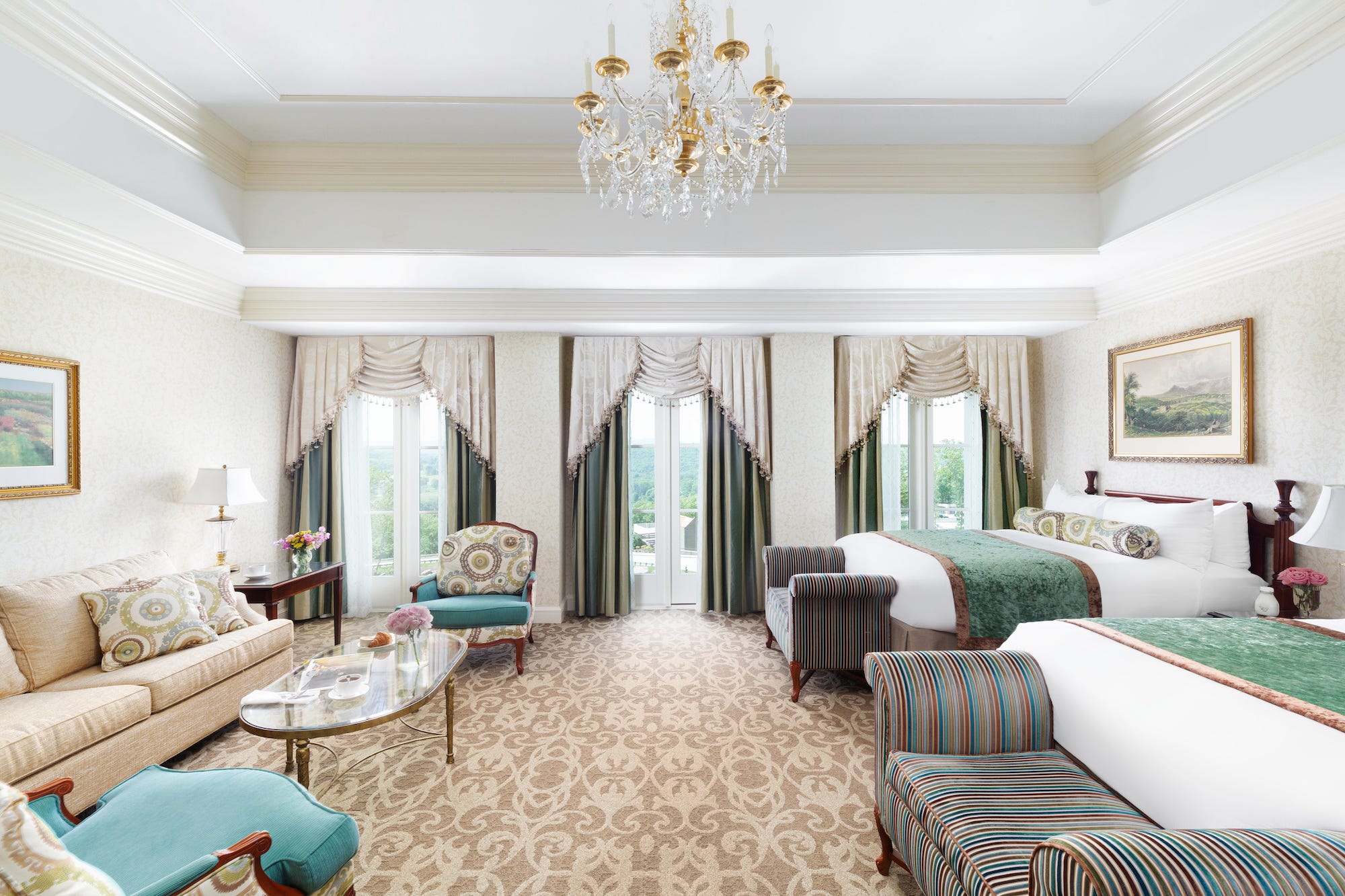 Jordan MillingtonOne of the suites available at Nemacolin.

The property team said that Nemacolin has implemented increased social distancing and mask requirements throughout the resort.

CEO Maggie Hardy said “sex and love is in the air” at Nemacolin. 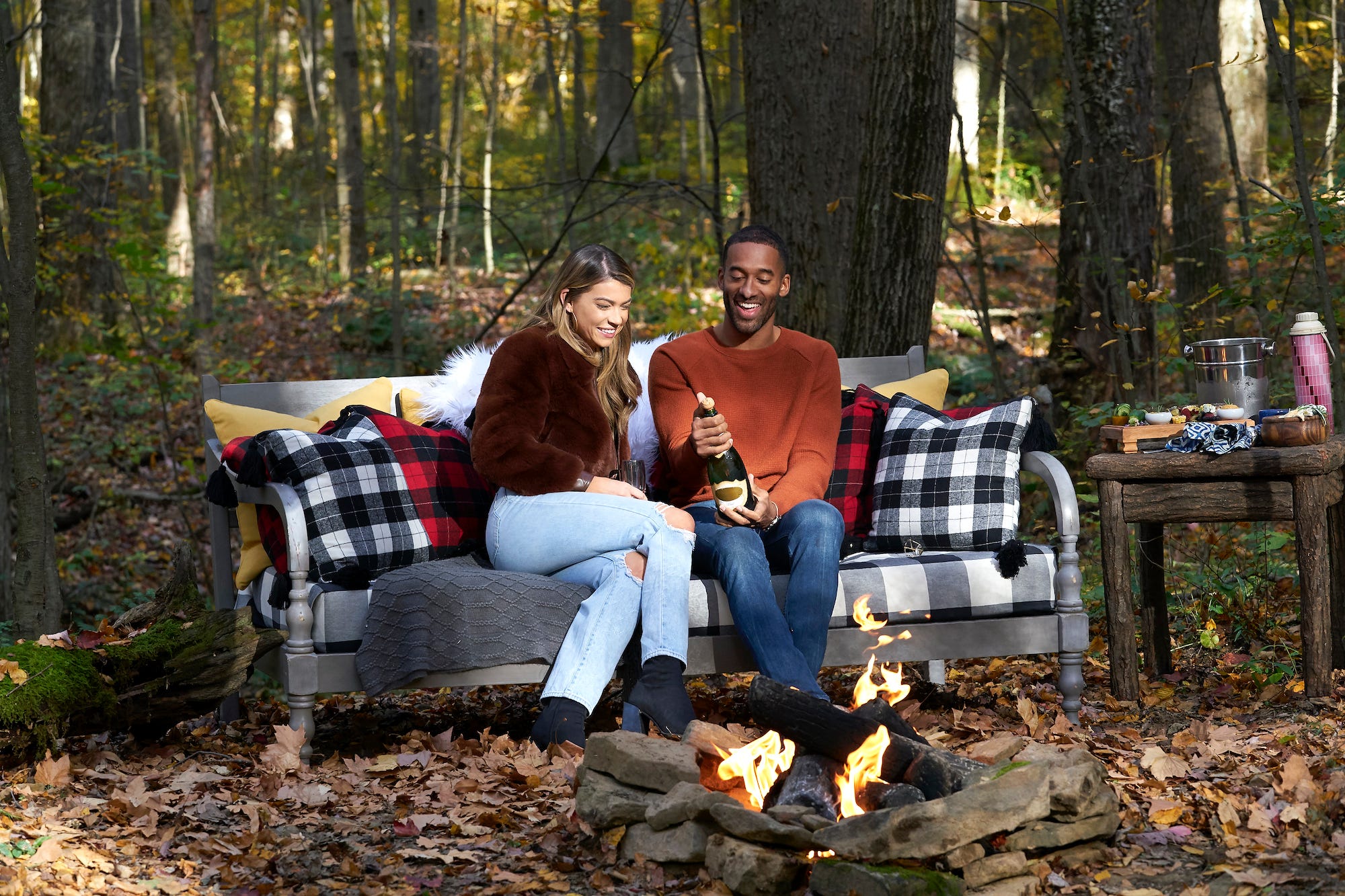 ABC/Craig SjodinMatt James and contestant Sarah Trott during a date on ‘The Bachelor.’

“Sometimes there’s some hanky-panky going on where it should not have been, but I can’t tell you everything that was going on,”Hardy told Page Six’s Tashara Jones this week. “There’s a lot of land, and a lot of woods out there. There were things going on inside and outside of the hotel all the time.”

“We actually found a used condom in the tree branch,” she added.

But Nemacolin’s property team assured us that the resort is family-friendly. 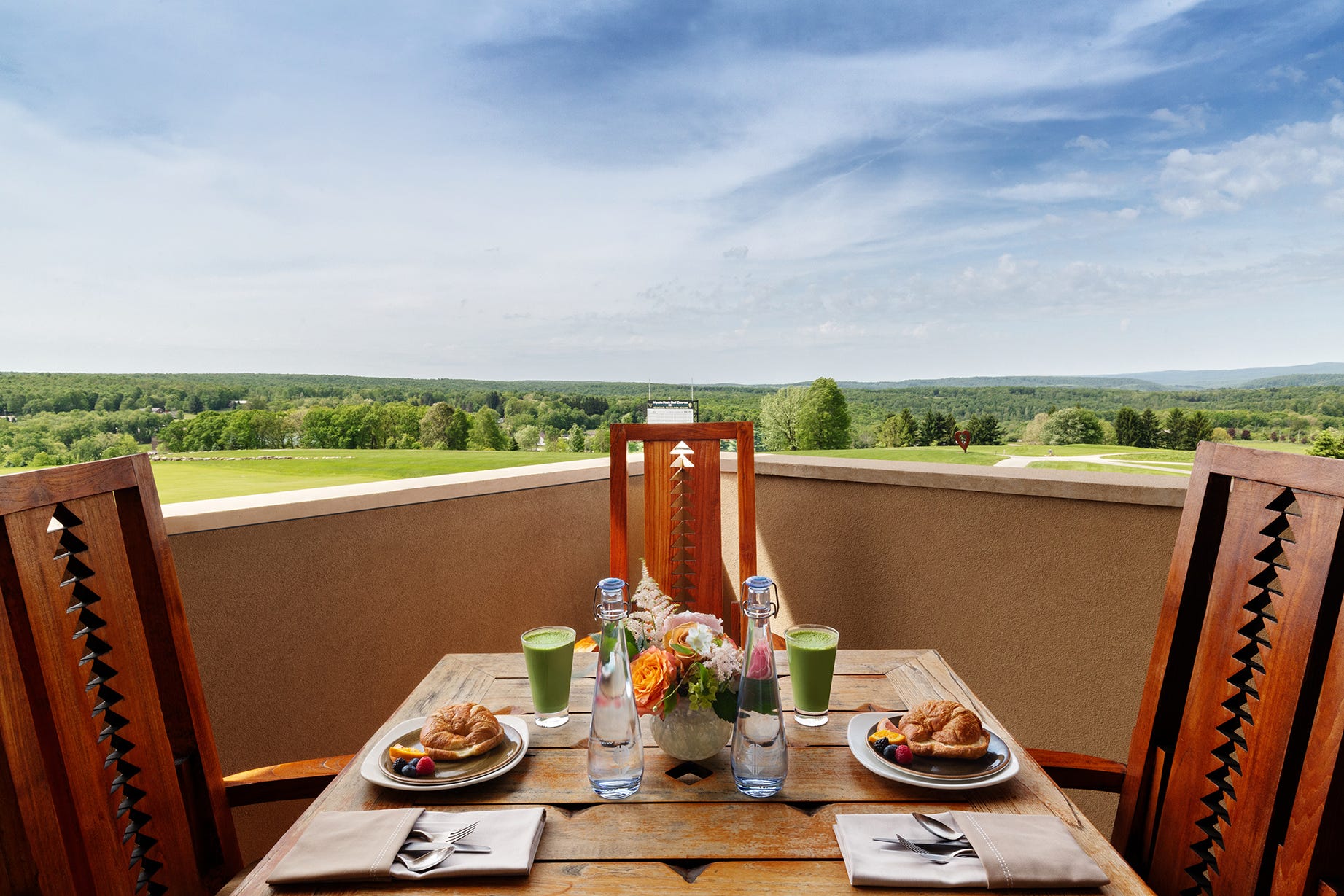 Jordan MillingtonOne of the balcony views from a room at Nemacolin.

“We want ‘Bachelor’ fans to know that while ‘The Bachelor’ caters to a niche demographic, the resort is actually for all ages,” the property team told Insider.

“Families have been enjoying the property for years and we want audiences to know that we welcome families and lone-travellers alike to experience our unparalleled property,” they added.