Racial injustice brought the sports world to a halt. Here's where the historic fight is headed next.

Kevin C. Cox/Getty ImagesGiannis Antetokounmpo and the Milwaukee Bucks kneel during the national anthem on August 8.

For the second time in 2020, the sports world came to a screeching halt, this time over the fight for racial equality and social justice reform.

On Wednesday, a strike led by the Milwaukee Bucks choosing not to play Game 5 of their first-round playoff series to protest the police shooting of Jacob Blake rippled through the sports world.

By Wednesday night, all scheduled NBA playoff games and WNBA games, and some MLB and MLS games had been called off.

On Thursday, sports leagues across America were grappling with what had unfolded and what would come next.

Here is how we got here. 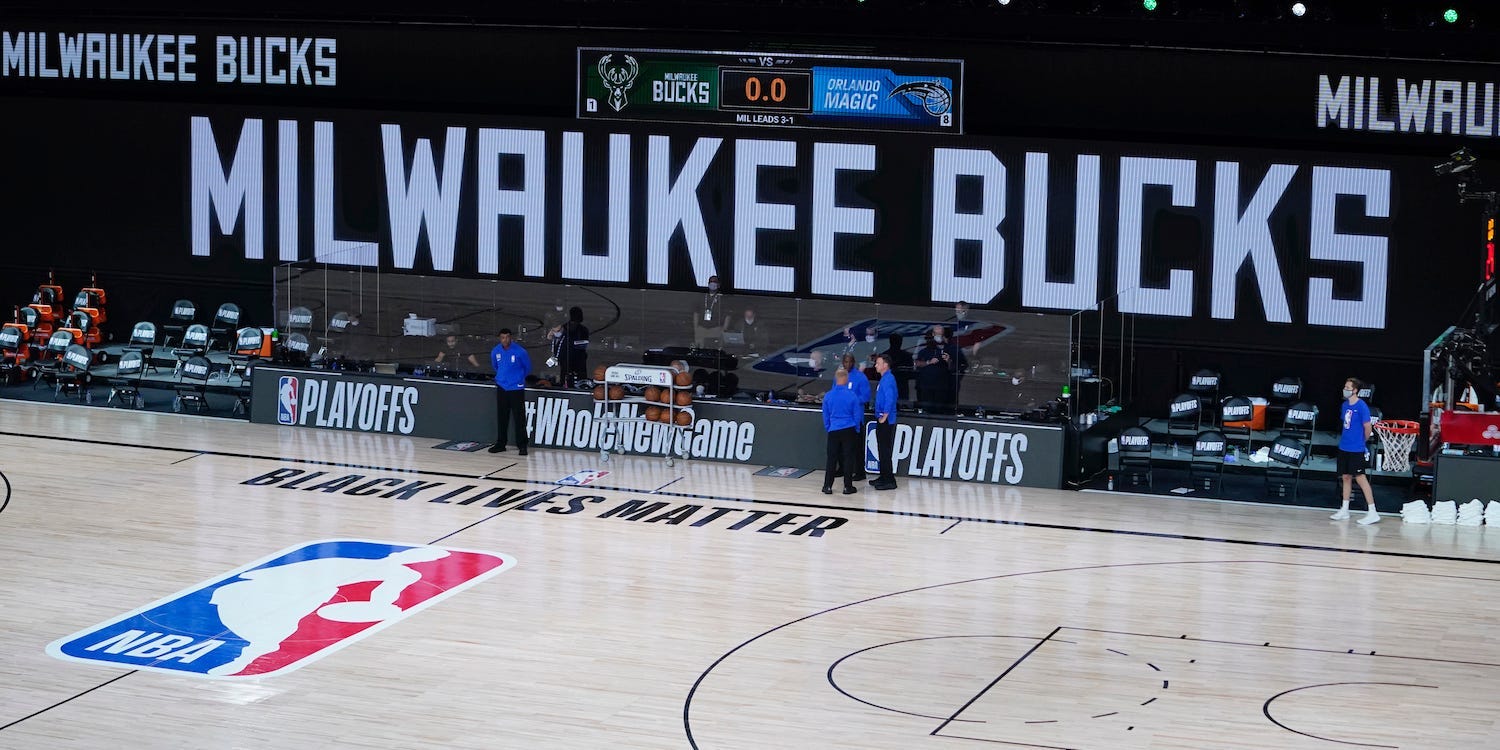 Ashley Landis, Pool/AP ImagesAn empty arena in the NBA Disney bubble when the Bucks did not take the court.

When the buzzer sounded in the AdventHealth Arena in Disney’s Wide World of Sports Complex on Wednesday at 4 p.m. ET, signalling the end of warmups and the beginning of Game 5 of the first-round matchup between the Bucks and Orlando Magic, only Magic players were on the floor.

The Bucks had not come out of their locker room for warmups, and in a matter of minutes, it became clear they wouldn’t. The Magic left the floor, followed by the referees, and soon, equipment managers began packing up game equipment, as word leaked from the Bucks locker room that they wouldn’t be playing.

Tensions had been rising in the bubble after the video of Blake getting shot went viral. Players had bemoanded being stuck in the bubble, unable to go protest or go home to their families and communities.

“We can’t do anything [from Orlando],” Bucks guard George Hill said Monday. “First of all, we shouldn’t have even came to this damn place, to be honest. I think coming here just took all the focal points off what the issues are.”

On Tuesday, players from the Toronto Raptors and Boston Celtics had said a boycott of playoff games had been considered. Though the NBA had worked with players to keep messages of social justice reform present throughout the NBA’s restart, many players said the symbolism hadn’t done enough to make their points clear.

The Bucks, however, had not given any signal that they were going to boycott.

According to ESPN’s Adrian Wojnarowski, the decision caught high-ranking Bucks officials off-guard; the players made the decision, with no input from management.

The Rockets, Thunder, Lakers, and Blazers follow suit and the NBA “postpones” action

Just over an hour later, reports made clear that after consideration, the Houston Rockets and Oklahoma City Thunder would not play their Wednesday evening game, nor would the Los Angeles Lakers and Portland Trail Blazers.

The NBA, in response, announced that the games were postponed and would be rescheduled.

Some in the sports world, including LeBron James, pushed back on the phrasing – the NBA had no input on the players’ decision to sit out games. However, the distinction still mattered, as postponing the games, rather than ruling a forfeiture, meant no wins or losses were attached in the series, and teams would not be punished.

The WNBA, which is also in a bubble, had three games scheduled for Wednesday night. Initial reports indicated the games would go on, perhaps with WNBA players planning to make gestures.

Instead, led by the Washington Mystics, the six teams decided to sit out of the games. Players from the Mystics, Atlanta Dream, Minnesota Lynx, and the Los Angeles Sparks gathered on the court to explain their thinking. Mystics players wore shirts that read “Jacob Blake” across them and had seven drawings of bullet holes in the back, representing the seven shots fired into Blake’s back by police. 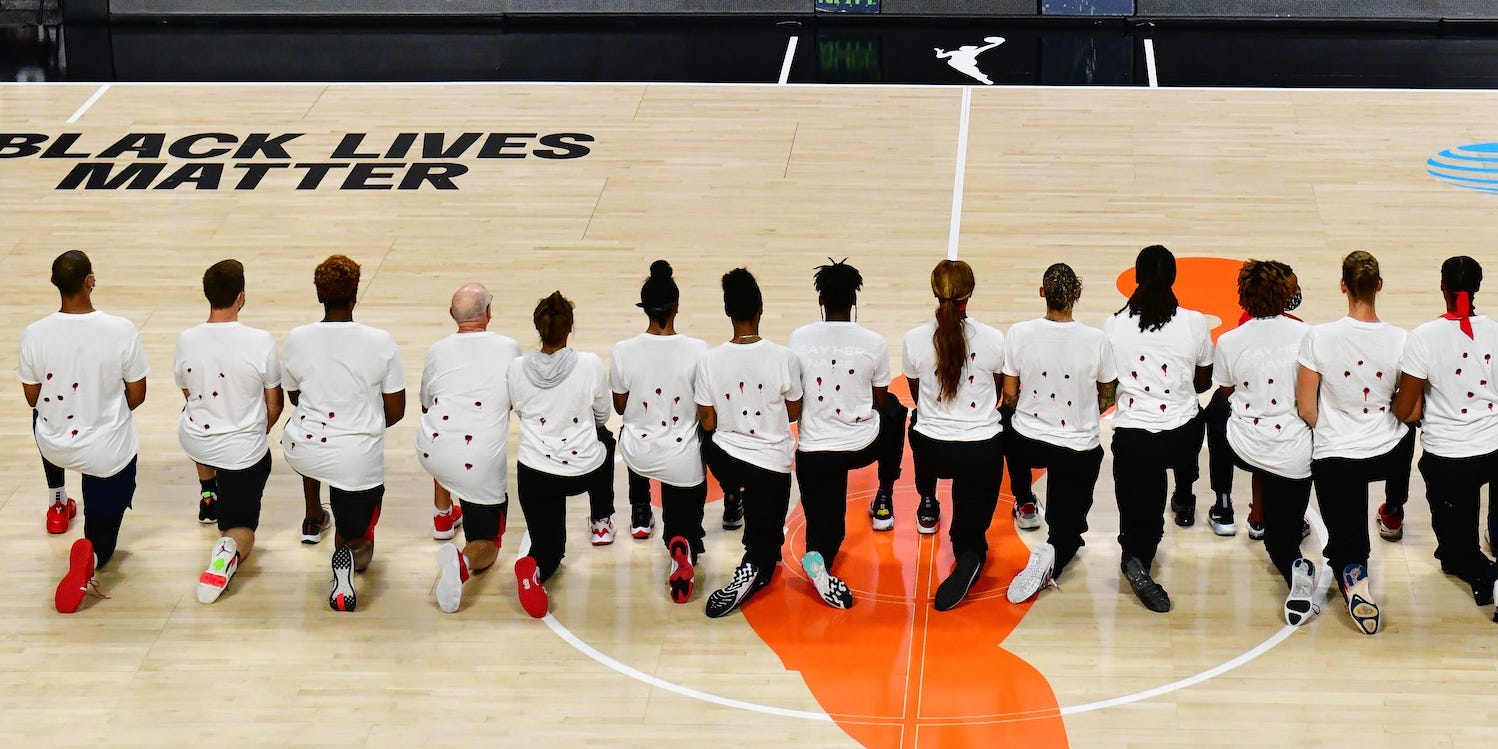 Julio Aguilar/Getty ImagesMembers of the Washington Mystics wear shirts with bullet holes in the back.

Like the NBA, the WNBA ruled the games had been postponed.

Some MLB players and teams opt-out, but not all

By 6:30 p.m. ET, the Milwaukee Brewers had decided to sit out of their game against the Cincinnati Reds, who also agreed not to play. The game was set to be played in Milwaukee, about 45 minutes from Kenosha, where Blake had been shot, and protests had ensued.

Over the following hours, the Seattle Mariners, San Diego Padres, San Francisco Giants, and Los Angeles Dodgers all decided to sit out of their games. Some games were already being played or had just finished as teams decided not to play.

Some individual players also chose to sit out, including Mookie Betts of the Dodgers, Jason Heyward of the Chicago Cubs, Dexter Fowler, and Jack Flaherty of the St. Louis Cardinals, and Matt Kemp of the Colorado Rockies.

The teams that did not play on Wednesday are expected to play doubleheaders on Thursday to make up for the lost game.

Following the NBA, WNBA, and MLB, five of six MLS games did not go off, with players choosing to sit out. One game between Orlando City SC and Nashville SC finished, as players did not have enough time to plan if they wanted to sit out. 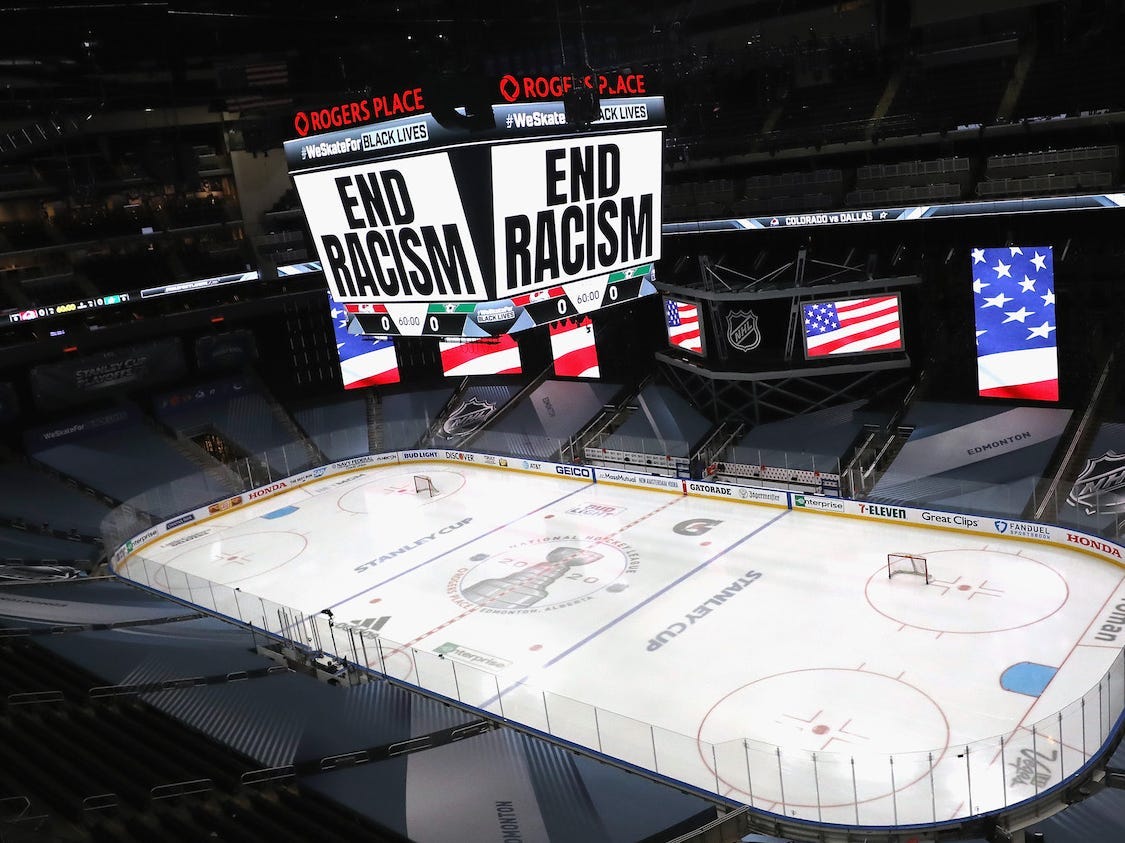 NHL games went on as scheduled, but began with a “moment of reflection.” Before Game 3 between the Boston Bruins and Tampa Bay Lightning in Toronto, a public-address announcer read a statement condemning racism while electronic screens read, “End Racism.” There was a 7-second moment of silence.

A game between the Colorado Avalanche and Dallas Stars did not have a pregame ritual, according to ESPN’s Greg Wyshynski.

“NHL is always last to the party on these topics,” Minnesota Wild defenseman Matt Dumba told Sportsnet 650 in Vancouver on Wednesday. “It’s kind of sad and disheartening for me and for members of the Hockey Diversity Alliance, and I’m sure for other guys across the league. But if no one stands up and does anything, then it’s the same thing. That silence. You’re just outside, looking in on actually being leaders and evoking real change when you have such an opportunity to do so.”

After the games’ postponement, NBA players in the bubble held a league-wide meeting, including coaches, to discuss the next steps.

The meeting ended around 11 p.m. ET, with reports of disagreement among players about how to proceed. The Los Angeles Lakers and LA Clippers reportedly voiced a desire to end the season, with LeBron James walking out of the meeting.

Others wanted to continue playing, but push owners of teams to take action toward social justice reform.

Ultimately, the meeting broke without a plan, with players agreeing to take some time to let emotions die down before meeting on Thursday.

As of Thursday, each league stands in different places 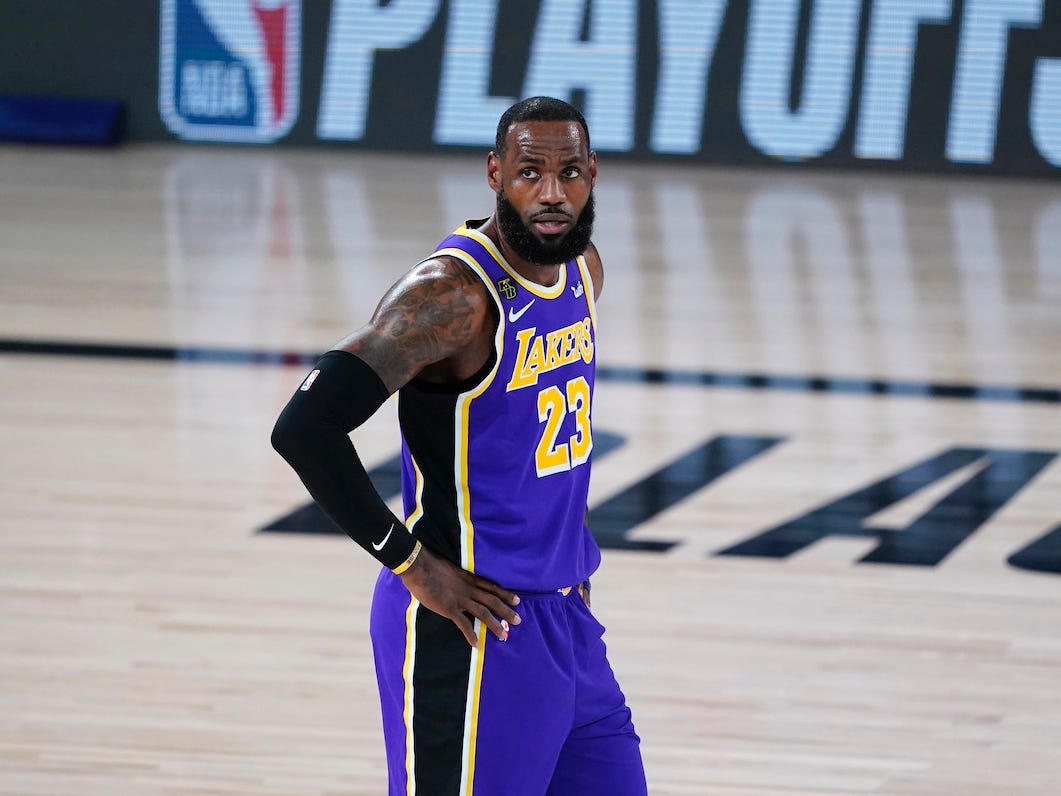 NBA players met on Thursday, and according to reports, agreed to continue playing the playoffs. However, on their agenda was a meeting with owners to push for action. Games are expected to be postponed on Thursday and possibly resume on Friday or over the weekend.

The WNBA announced that Thursday games would be postponed.

In the NHL, teams were preparing for cancelled playoff games,according to hockey reporter Elliotte Friedman.

Meanwhile, NFL teams largely cancelled practices on Thursday, following in the footsteps of the Detroit Lions, who cancelled their practice on Tuesday to protest the shooting of Blake. Though not every team cancelled practice, several coaches, including the Atlanta Falcons’ Dan Quinn and Baltimore Ravens John Harbaugh, said they would meet with players to discuss steps to take action for social justice reform.

According to reports, MLB and MLS may both grapple with different factions within the player ranks.

As ESPN’s Jeff Passan wrote, MLB released a fairly neutral statement saying the league respected the decisions of players who decided to sit out, not that the league supported them. The statement was reflective of a league with a “diverse ecosystem” and worse labour relations between players and the league than the NBA.

In MLS, there is backlash brewing after Real Salt Lake owner Dell Loy Hansen expressed “profound disappointment” that RLS decided not to play its game on Wednesday. He also suggested he would make a less financial commitment to the team.

“It’s taken a lot of wind out of my sails, what effort I want to put into recruiting players and building a great team,” Hansen said. “It just seems that’s not a very good path to take.”

Wojnarowski reported on Thursday that NBA players and team owners were planning to meet to come up with a way to move forward on pushing social justice reform. From the players’ side it appears as if the symbolic gestures the league agreed upon in the bubble – “Black Lives Matter” on the courts, social justice messages on jerseys, kneeling for the national anthem – will no longer be enough.

As games continue to get postponed, future days likely won’t top Wednesday in drama or theatrics, but an historic day in sports felt like a tipping point for American athletes seizing their leverage.