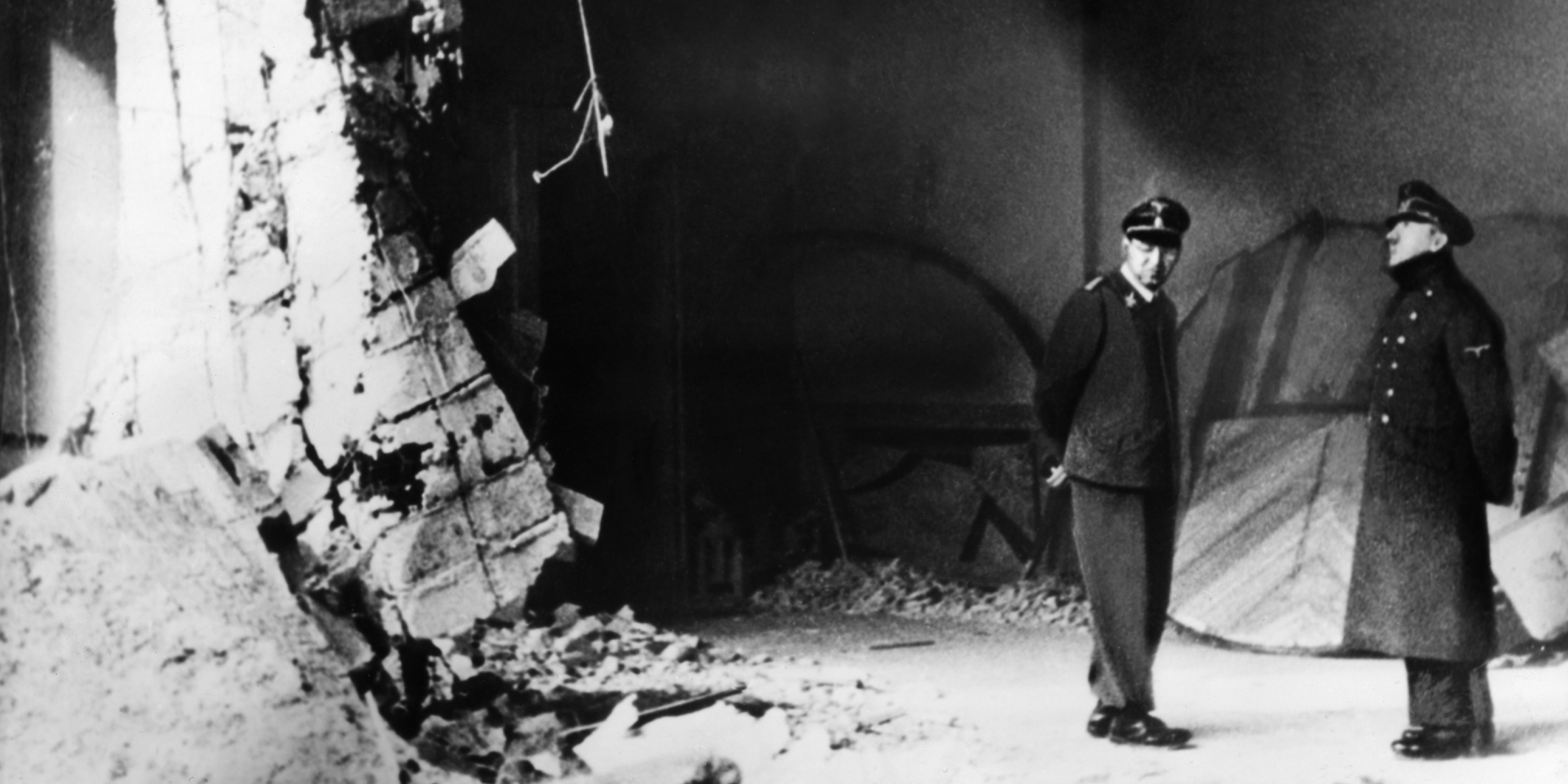 (AP Photo)Adolf Hitler, right, views the damaged Reichskanzlei in Berlin, Germany, in April 1945, shortly before his suicide. This is one of the last photos of Hitler. Person at left not identified.

In the early-morning hours of May 7, 1945, the remnants of Nazi Germany’s military leadership signed an unconditional surrender to Allied forces.

When the news broke the next day, troops and civilians around the world celebrated Victory in Europe Day – the Soviet Union would mark Victory Day on May 9 – exuberant about the end of nearly six years of war that had destroyed much of Europe.

When German and Allied military officials gathered again in Berlin near midnight on May 8 to sign surrender documents, the atmosphere in the room was heavy with emotional and political weight. 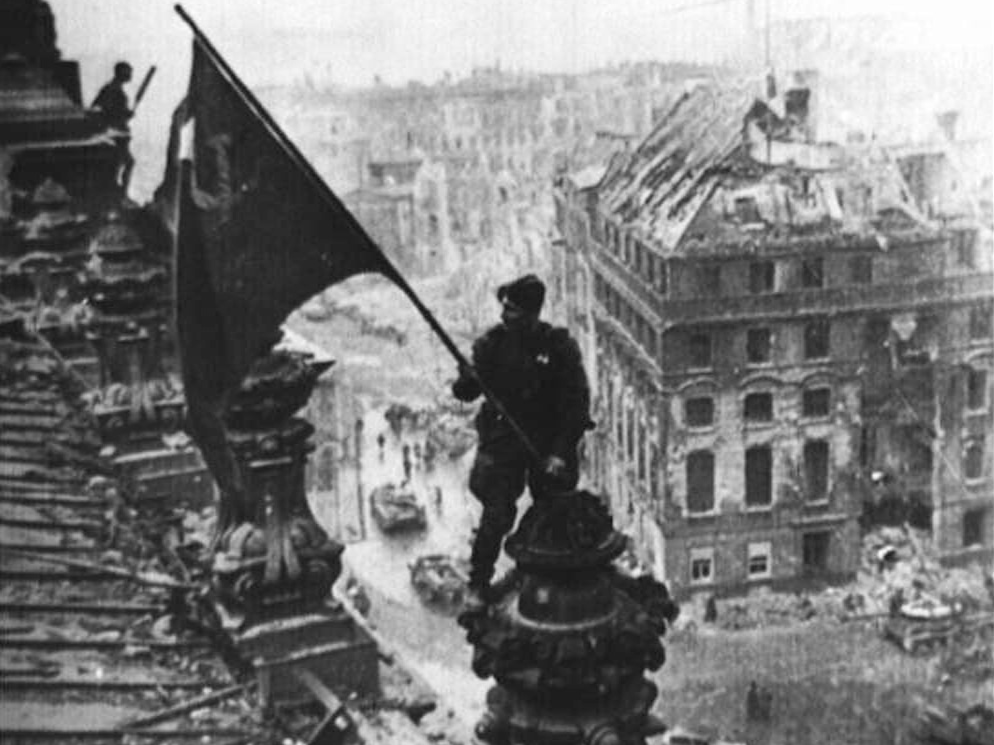 The Germans, characteristically severe, went through the proceedings in a mix of resignation and resentment, while the Soviets, Americans, and other Allies were relieved at the war’s conclusion. All were uncertain what would come next.

Historian Antony Beevor’s sweeping history of the final months on the eastern front, “The Fall of Berlin 1945,” captured the mood in the room as victors and vanquished gathered to bring their conflict to an end:

“Just before midnight the representatives of the allies entered the hall ‘in a two-storey building of the former canteen of the German military engineering college in Karlshorst.’ General Bogdanov, the commander of the 2nd Guards Tank Army, and another Soviet general sat down by mistake on seats reserved for the German delegation.”

“A staff officer whispered in their ears and ‘they jumped up, literally as if stung by a snake’ and went to sit at another table. Western pressmen and newsreel cameramen apparently ‘behaved like madmen’. In their desperation for good positions, they were shoving generals aside and tried to push in behind the top table under the flags of the four allies.”

The German delegation then entered the room, its members looking both “resigned” and “imperious.” 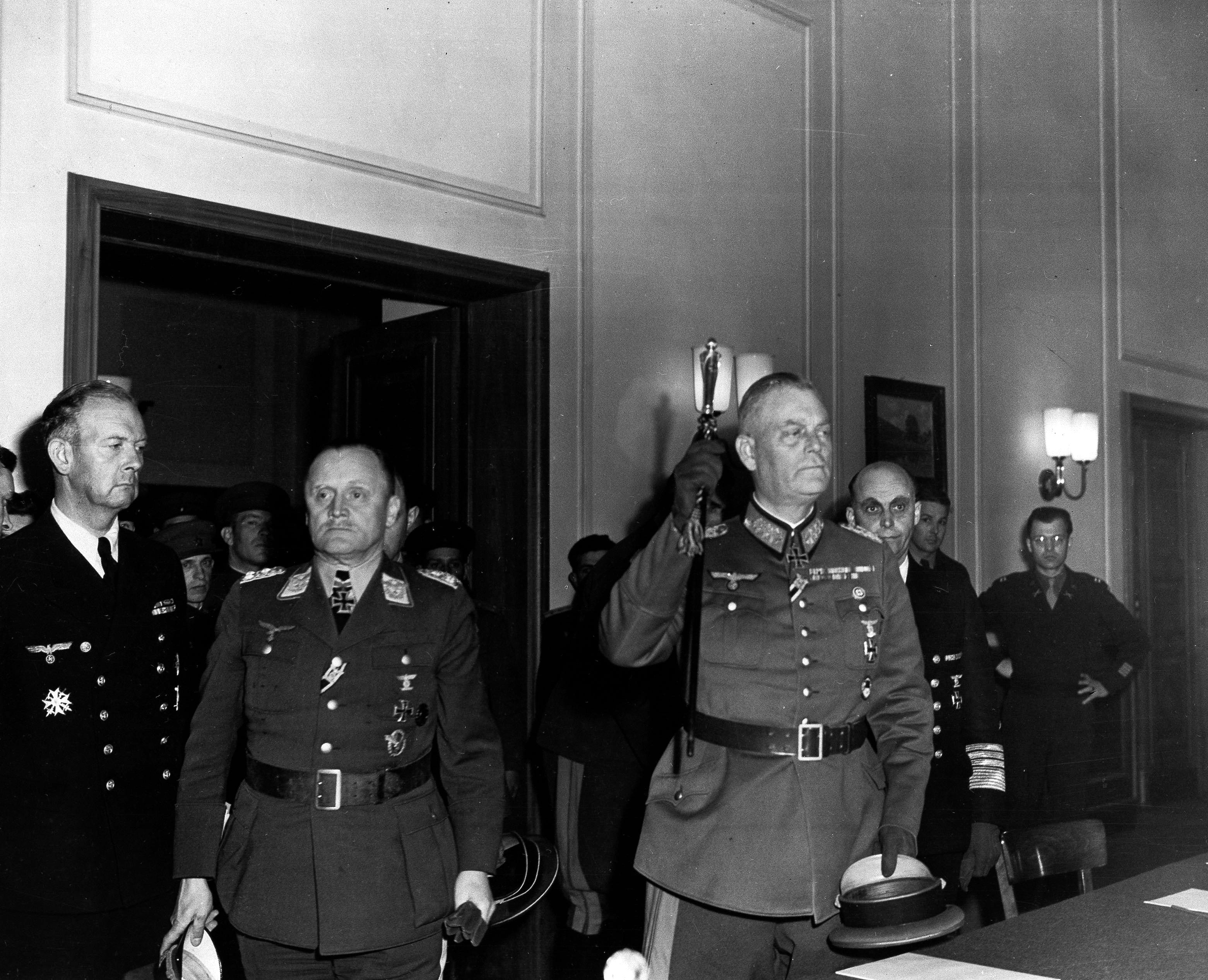 Field Marshal Wilhelm Keitel, commander of the Nazi armed forces during the final days of the war, “sat very straight in his chair, with clenched fists,” Beevor wrote. “Just behind him, a tall German staff officer standing to attention ‘was crying without a single muscle of his face moving.'”

Gen. Georgy Zhukov, a senior Soviet commander during the war’s final days, stood to invite the Germans “to sign the act of capitulation.” Keitel, impatient, gestured for the documents to be brought to him. “Tell them to come here to sign,” Zhukov said.

Keitel walked over to sign, “ostentatiously” removing his gloves to do so, unaware that the representative for the chief of Stalin’s secret police, the NKVD, was lingering just over his shoulder.

“‘The German delegation may leave the hall,'” Zhukov said once the signing was complete, Beevor wrote, adding:

“The three men stood up. Keitel, ‘his jowls hanging heavily like a bulldog’s’, raised his marshal’s baton in salute, then turned on his heel. As the door closed behind them, it was almost as if everybody would in the room exhaled in unison. The tension relaxed instantaneously. Zhukov was smiling, so was [British Air Chief Marshal Sir Arthur] Tedder. Everybody began to talk animatedly and shake hands. Soviet officers embraced each other with bear hugs.”

“The party which followed went on until almost dawn, with songs and dances. Marshal Zhukov himself danced the Russkaya to loud cheers from his generals. From inside, they could clearly hear gunfire all over the city as officers and soldiers blasted their remaining ammunition into the night sky in celebration. The war was over.”

The chaos of the war had ceased, but for Soviets and Germans other hardships were to come. 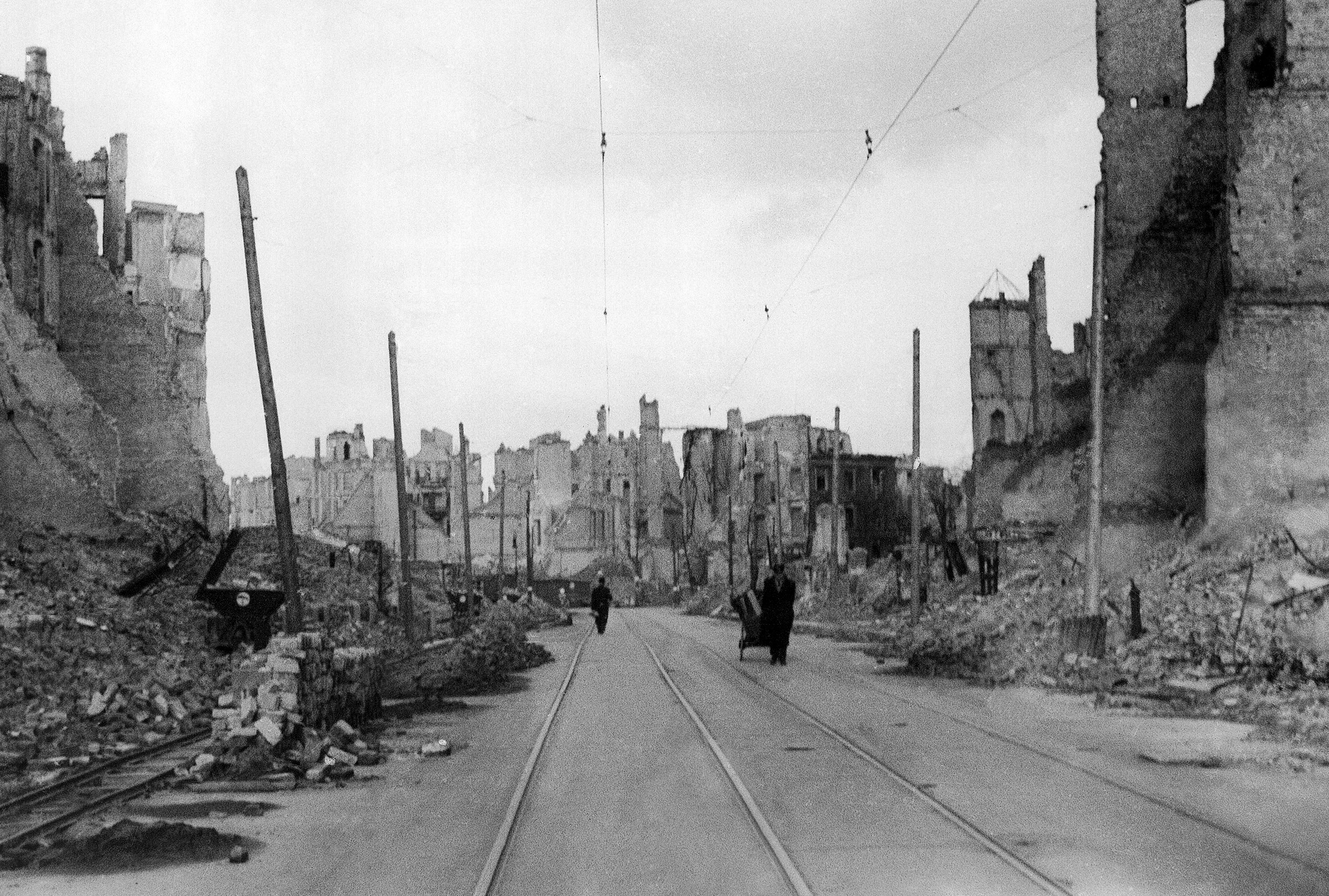 (AP Photo/Hans Martin Herloff)This section of Berlin, along Nettelbeck Strasse near Wittenberg Platz, was called the “City of Death” by Berliners, shown in April 1945.

Zhukov, long a confidant of Stalin, earned glory for his command during the war but would soon find himself on the outs with the mercurial Soviet leader.

Keitel would face war-crimes charges, including crimes against humanity. He was convicted and hanged in October 1946. Like other Nazi leaders who were hanged, Keitel’s body didn’t drop with enough force to break his neck. He dangled at the end of the hangman’s rope for 24 minutes before dying.

Germans, many of them under the Soviet Union, would struggle to rebuild both physically from the war and emotionally from their encounter with Allies forces – Soviet soldiers in particular. Berlin, buffered by two weeks of intense urban fighting, was shattered.

The Soviet Union’s desire for political vengeance and economic advantage lead it to hobble or strip much of East Germany’s infrastructure and resources.