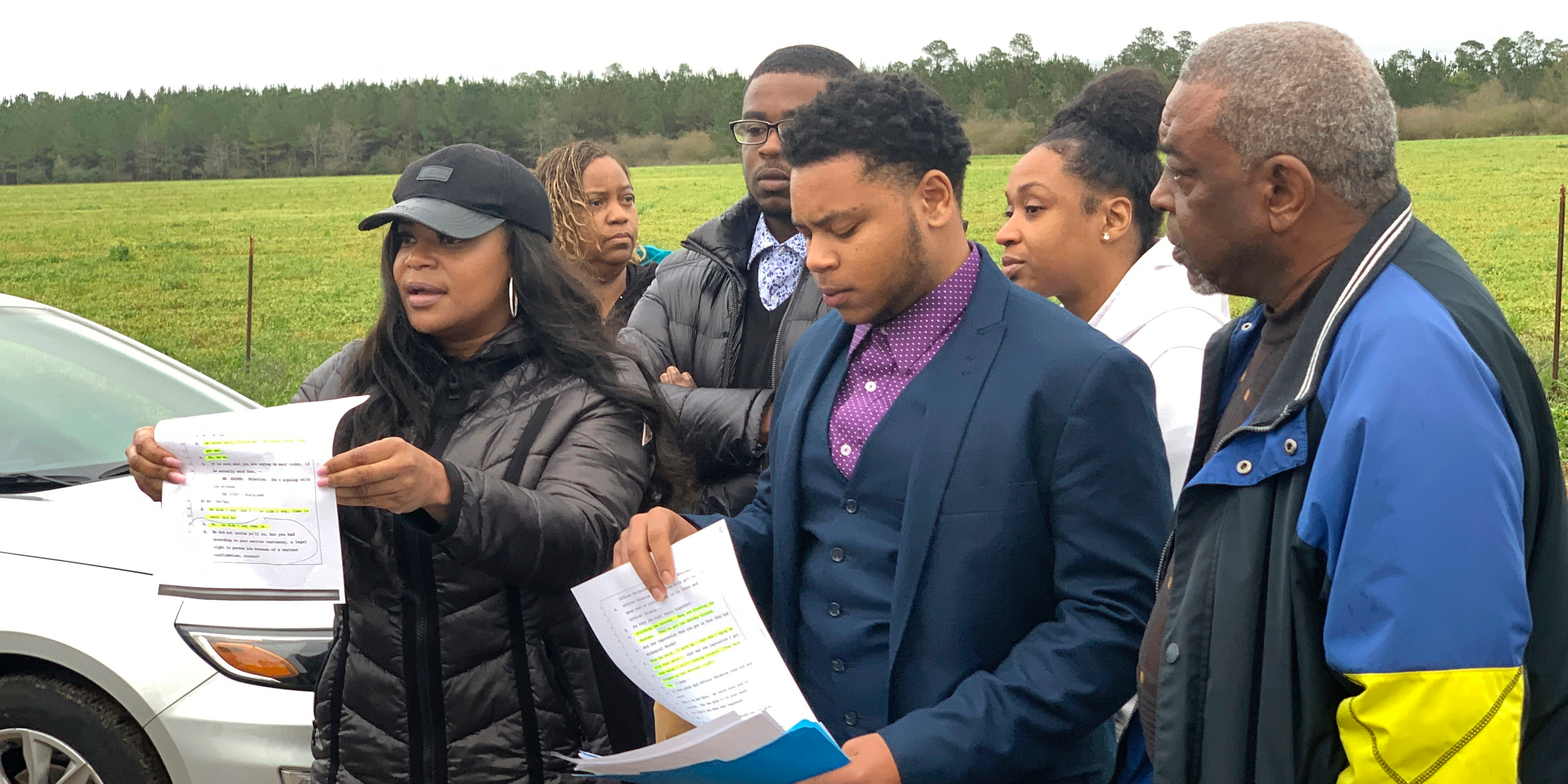 AP Photo/Kimberly ChandlerFamily members of condemned Alabama inmate Nathaniel Woods speak to reporters outside Holman Correctional Facility ahead of his scheduled execution on Thursday, March 5, 2020 in Atmore, Alabama. His sister, Pamela Woods, holds a page from the trial transcript that she shows that her brother was surrendering when three police officers were shot by another man in 2004.

Alabama inmate Nathaniel Woods was put to death on Thursday night after the US Supreme Court temporarily delayed his execution to review his case.

Woods, 43, was convicted in 2005 of killing three Birmingham police officers in 2004, though his co-defendant admitted to firing the gun, and has said Woods didn’t have a gun and had run away when shots rang out.

He was pronounced dead at 9:01 p.m. by lethal injection. He appeared to arrange his hands in the sign of his Islamic faith before his death, but had no last words, according to The Associated Press.

Priotr to his death, Woods shared a poem with his sister Pamela, and asked that it be published in The North Star – originally an abolitionist newspaper that was revived by Shaun King in 2018 – in the event that he was executed.

In the poem, he speaks of his case and death. He ends it with: “No living being knows the time of its end/Man makes provisions for a hundred years/yet, knows not that he might die the next minute.”

In the days leading up to Woods’ death, his family members and prison reform activists pushed for his execution to be called off and collected signatures in hopes that Republican Alabama Governor Kay Ivey would grant Woods clemency.

Woods’ co-defendant, Kerry Spencer, called for the execution to be stopped in an open letter from death row seen by CNN.

Spencer has confessed to being the gunman in the 2004 killings, and said Woods was “100% innocent.”

“I know that to be a fact because I’m the person that shot and killed all three of the officers that Nathaniel was subsequently charged and convicted of murdering. Nathaniel Woods doesn’t even deserve to be incarcerated, much less executed,” he said.

Spencer told CNN that he alone shot officers Harley Chisholm III, Charles Bennett, and Carlos Owen when they stormed a crack house he and Woods were sleeping in. He said the officers pointed a gun at him, so he opened fire with a rifle. A fourth officer was shot in the leg but survived.

The US Supreme Court did briefly delay Woods’ execution to review the case, but said they would not intervene.

Ivey also said she would not step in to halt the execution, describing Woods as a “known drug dealer” who played an “integral participant in the intentional murder of these three officers.”

“This is not a decision that I take lightly, but I firmly believe in the rule of law and that justice must be served,” she said, according to CNN, adding that there was no evidence “Woods tried to stop the gunman from committing these heinous crimes.”

King referred to Woods’ death as “a modern-day lynching” on Twitter.

Nate will die for a crime another man confessed to and says Nate had nothing to do with. My heart and prayers are with Nate and his family and all the advocates who worked tirelessly to save his life.

In the case of Nathaniel Woods, the actions of the U.S. Supreme Court and the Governor of the State of Alabama are reprehensible, and have potentially contributed to an irreversible injustice. It makes a mockery of justice and constitutional guarantees to a fair trial.

A relative of one of the officers killed called Woods’ death “partial justice.”

“Partial justice has been served today for our families. One cop killer down as we patiently wait for the next one,” Starr Sidelinker, Harley Chisholm III’s sister, said in a statement to CNN on behalf of Chishom’s sister Rhonda.

Testimony showed that the officers had approached a house where Woods and Spencer were believed to be dealing drugs, and after talking to Woods through a back door, Owen and Chisholm entered the building.

Woods told state lawyers that he was surrendering to officers when Spencer opened fire.

Prosecutors told jurors that Woods was used as “bait” to lure the officers into the house, though no evidence was produced showing that Woods had plotted with Spencer.

“Under Alabama law, someone who helps kill a police officer is just as guilty as the person who directly commits the crime,”Ivey told NBC News. “Since 1983, Alabama has executed two individuals for being an accomplice to capital murder.”

Alabama is the only state in which a jury doesn’t have to be unanimous to impose the death penalty.